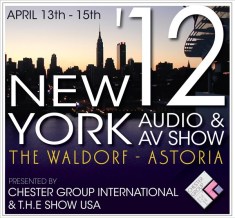 On Saturday morning, Stereophile’s John Atkinson chaired an “Ask the Editors” panel. Interestingly, I was not invited to sit on this august panel, though I’m sure it was merely an oversight. Next time.

Anyway, please meet your panel. From the left, we have: Alan Sircom of HiFi+), Stephen Mejias of Stereophile, Jeff Dorgay of TONEAudio, Alan Taffel of The Absolute Sound, Michael Fremer of Stereophile, Grant Clauser of Electronic House, and Art Dudley of Stereophile.

John Atkinson is a funny dude. Ever heard him give a talk? He can’t help himself. But he’s so British, he can’t exactly bring himself to be too brash or too outlandish. He’s … understated. Tastefully so.

But he was sure cracking wise.

The questions from the audience were kind of off the wall. The Editors got taken to task about review standards — or the lack of them. What does it mean when a reviewer uses a certain term, or measures against a given standard? Is that shared? How are we readers are supposed to understand?

But perhaps if more magazines sent the gear to more than reviewer …?

Atkinson, apparently not thrilled with the DIY thread from a rather insistent questioner, proffered a doozy: “Assuming that moderately priced loudspeakers are, by definition, an exercise in compromise, why then do no-compromise loudspeakers sound different?”

Loaded! But no one bit down on that one, sadly. I think someone offered up the softball — “it’s the vision of the designer”. But no one really smacked that one out of the park.

So, on Sunday, I asked Jeff Joseph of Joseph Audio that same question. He laughed. “I think a lot of designers are chasing a sound. Something formative. And where they end up has more to do with this starting point than with budgets or principles or goals.”

But I liked that question more than “Why does audio show music suck so bad?” Yes, I get that there’s only so many times you can hear Hotel California or Nils Lofgren in any one day, but that is why bringing your own music is helpful, no?

I asked the panel to walk through some of their favorite “audio chestnuts” — that is, stuff that is assumed true by the audiophile crowd, but patently false in their experience. I got stuff like “The rule of thirds”, “All amps sound the same”, “reviews are purely subjective” (which is different from saying that reviews are largely poetic exercises, bathed in excess, excrement and hyperbole), “measurements are irrelevant” and “measurements are guides to sound quality”.

For some reason, I think we left a few out.

It was interesting to see all these guys, lined up. A lot of talent up there, and over a hundred years worth of experience in high-end audio. On one end, Art and Mikey. On the other, Stephen Mejias. Past, present, future.

This session was really too much to do in an hour if it’s not proactively moderated. And even then, you need two to get these folks warmed to the idea of their own voices, actually speaking extemporaneously rather than able to consider their words.

There were stories in there, but we didn’t really get to them. I didn’t bother with Sunday.

Not to suck up, but this is what the Ask the Editors panel could have been.

Jeff explained his magazine, his approach, why they do what they do and cover what they cover. Wine, cars, watches — all with high-end audio? Well, apparently — you all eat that shit up, so there you go.

This is a guy who’s obviously having way too much fun. That said, he listened, entertained, and generally held forth on “why TONEAudio” is out there and what it can offer.

Ever wondered why TONEAudio looks as amazing as it does? Why the pictures are so awesome? Why everything flows? Why TONE is the best looking destination in the high-end? And not by a little bit?

Well, let me introduce you to the woman that makes that happen: Jean Dorgay. It’s her eye, taste and skill that makes it roll.

Seriously. Put a copy of Stereophile or the Absolute Sound next to a copy of TONEAudio. Flip the pages. Yeah. Uh huh. See what I’m talking about? That’s because TONEAudio has an Artistic Director. Hi, Jean! Nice work!

I didn’t go out, much, while I was in NYC. Tweak Studio and Burmester teamed up to get a real DJ in the house to spin some tunes.

I think we underutilized this guy.

Only at an audio show is the DJ’s gear out front where the random village idiot can wander up, unplug him, and start playing Madonna. Bad call, dude.

I still can’t get over the gear on display here.

I did catch one of the 3 or 4 shows scheduled during the show. Amber Rubarth and her crew rocked a modest audience of about 50 in one of the adjoining rooms.

They were great! The dude in the blue shirt beatboxed the hell out a series of tunes. How he did all that with his face is completely beyond me.

This last is the jackass with the camera. All those hotel mirrors, it was really too much ask to not blind folks randomly. Whoops! Sorry. Finger slipped. Whoops! Sorry. Whoops! I think I burned an entire battery, just blinding random people.

Wes Bender Studio NYC put together something more than a room at NYAV this year. It was a tour-de-force. Hansen speakers. Redpoint Audio Design with Zesto for vinyl. Lindemann for discs. Viola Audio Labs for […]

Audio Shows — Next Up

Just booked my travel arrangements for AXPONA in Chicago (March 8-10th). Looking forward to a quick visit to the Windy City and meeting up with the rest of the TAS team. Not sure if I’m […]

Which audio shows — and why?

The first half of the year seems to be stuffed with audio show goodies. Obviously, I wish I could do all of them, but I’m not sure that’s reasonable or feasible. Which of these are […]