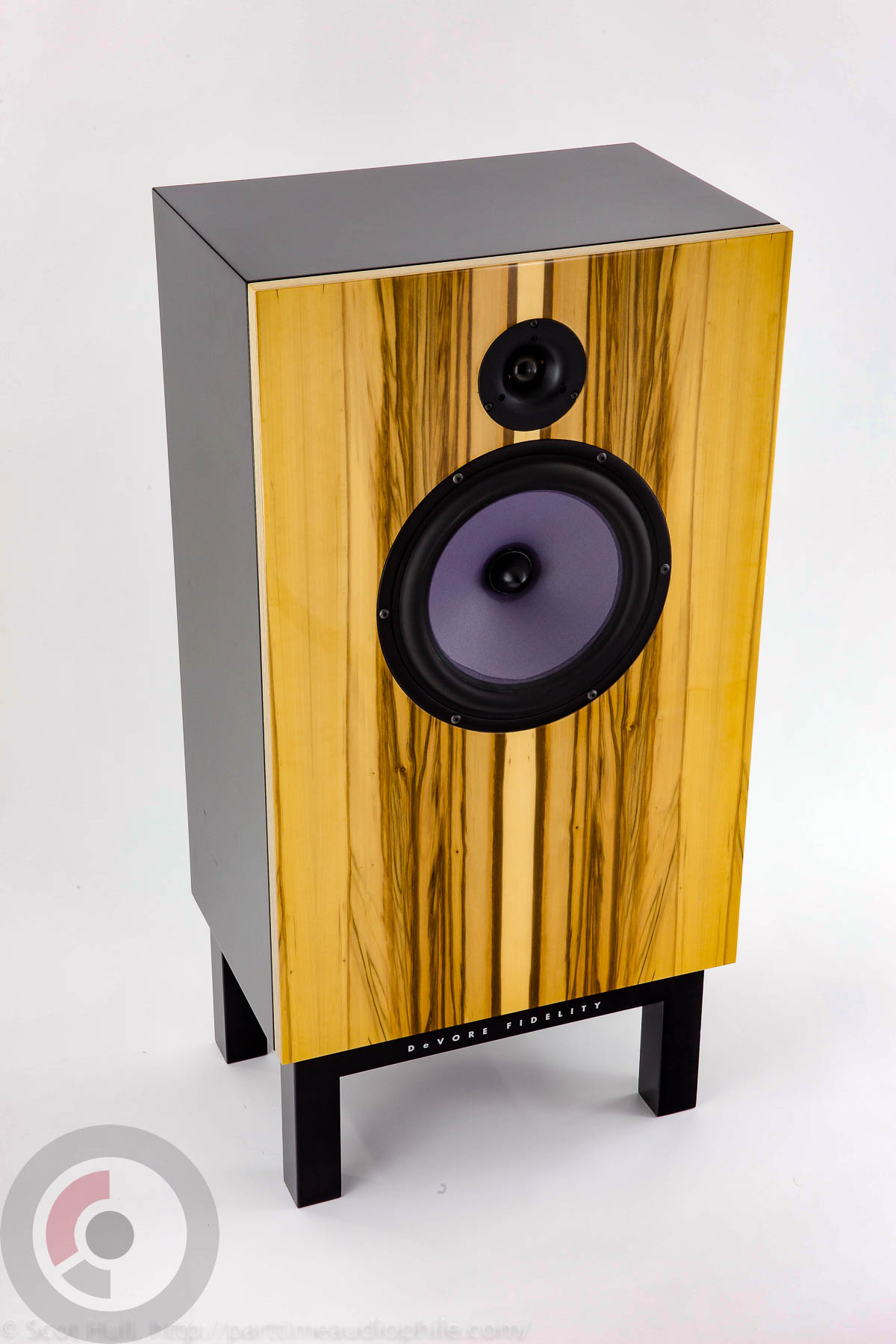 Every now and again, I get my greasy monkey paws on something truly fine. This? This is one of those times.

I borrowed this pair from my local dealer Command Performance, down in Falls Church VA. He’s had them as demos for about a year or so now, and I’ve been itching to bring them for an extended visit pretty much since I first heard about them, much less heard them. The stars aligned, and I got to borrow them — and now, you get to read about it in my unreview.

I’m a fan of John DeVore’s work, and the O/96 marks a happy milestone, if not precisely a departure for him. That is, the Orang isn’t entirely different in kind — it still has DeVore sensibilities. The presentation is engaging and there’s a that signature emphasis on tone that is altogether beguiling and seductive. You probably already know that it’s a 10 ohm loudspeaker with a 96dB sensitivity that (figuratively speaking) screams SET, something and of itself rather remarkable, especially given how rare this approach is (at least these days it is). And yes, I can happily report that this Orang pairs spectacularly with an 8wpc BorderPatrol 300b-based amplifier. Oh yes, yes indeedy.

The speakers are rear ported, so expect to fiddle with their placement. Let me suggest you also endeavor get adequate distance for the listener — John says that the design, which may seem to sit a bit low on the visual horizon, works best from 8’+. My listening agrees with this. Sit too close and the sound stage “feels” a bit short, get the distance right and everything unfolds like a giant sunflower, and you’ll be prompted to over-write sentences stuffed full of absurd strings of adjectives that no one is going to take seriously.

The bass response on the O/96 is actually what drew my eye, if you’ll pardon the confession — John has it spec’d at 25Hz (F3). That’s deep, folks! 25Hz, with a high sensitivity, for $12,000/pair, that’s a really an unusual combo. And that bass is outstanding, just have a care as proper positioning will take it from “plummy” to “punchy”.

The front baffle is a thick slab of plywood, but that big, flat surface is just begging for an exotic-wood veneer, which John is very happy to help you select. The veneer here was  specifically selected for a “light” appearance, but most of the O/96s you meet in a dark alley for that longed-for nightly tryst will have a bit more dramatics thrown in. Special order veneers will add a bit to the order time and bottom line, but given the flexibility, I’d strongly suggest considering getting your jollies out and picking a veneer that s turns your particular crank — you’re going to want to put these babies where everyone is going to see them and not just hear them.

If you look at the rear of the cabinets, you’ll notice there are no terminals — they’re actually mounted on the bottom of the cabinet. Tricky! Getting to them means reaching up under the separate, matching, four-legged stand. Personally, I think this tidies up the appearance quite a bit, but tightening up a pair of spade-laden speaker wires may require some careful tipping — or smashing your fat face onto the floor as you try to get at least one eye to focus enough to see which terminal has the red ring around it.

The tweeter sits in a small horn, which means you’ll have to toe the speakers in. I found that on-axis was best. Shooting over my shoulders widened the sound stage without detracting from focus, which was eerily pin-point, but the best height and depth came from straight-on.

So, in this unreview, I can tell you that the O/96 sounds and looks killer. The sound is big and bold, and that bass is so terrifically welcome … yeah.

As part of my ongoing search for a SET-based system, this was a huge score, and yes, I’m thrilled with this speaker. Some day, I hope I’ll have the opportunity to do them justice with a full review, but in the meantime, Art Dudley, a real reviewer, did a fine job of that over at Stereophile. Check that out, here.

Just a side note, in case you were wondering. I ran these with an S10 EXD stereo amplifier from BorderPatrol, a dual-mono/dual external PSU 300b SET. I paired that with a BorderPatrol Control Unit EXT1 and iced that cake with a NOS DAC that I need to talk more about at some point. Best sound I’ve heard in the home system. Budget permitting, I’ll be bringing all of this stuff in as part of a more permanent relationship.

By John Grandberg More audiophiles these days are embracing the pleasures of headphone listening. There’s an ever-growing selection to choose from, but enthusiasts soon learn that a key factor in achieving the ultimate sound quality […]

I’m going to confess something. Ready? Headphones and headphone audio systems can be hard to like. The issue is context, for me. I come at audio’s high-end by way of two-channel and multi-channel audio systems. Big […]