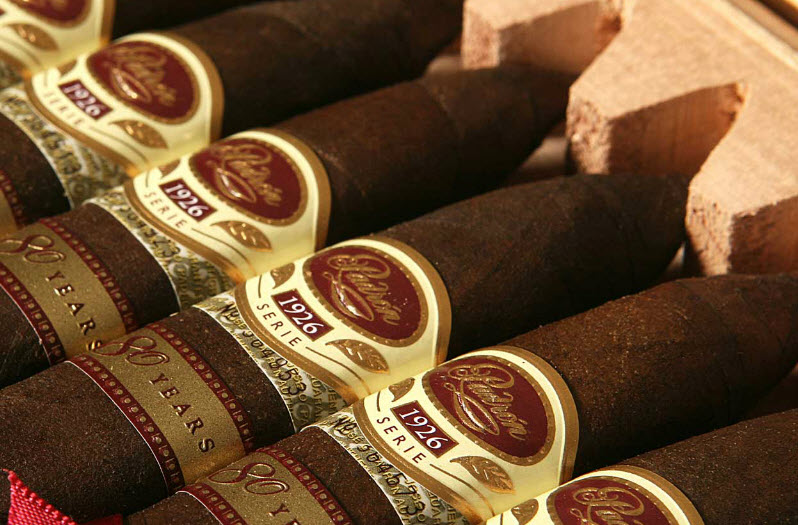 Colleen and I just returned from a dealer event in Phoenix a few days ago where we introduced our new Axis VoiceBox S monitors to the Arizona Audio Video Club, our second visit in as many years. Normally at the conclusion of such an event, the attendees line up to talk with us about the products we distribute, whether this amp will go with that pair of speakers, that sort of thing. Toward the end of the meeting, one gentleman approached me and asked me a question I didn’t quite expect.

“What do you think about Cuban cigars once again entering the US marketplace?” he asked, obviously aware that I was an avid cigar smoker from some of my writings on my Vinyl Anachronist blog.

I brought up my usual points, gained from my brief experience as the co-owner of a cigar lounge back in Texas as well as my nearly twenty years as a cigar enthusiast. The Cuban cigar market, as I was told a few years ago, is pretty much spoken for in the global marketplace. The great Cuban cigar plantations and rolling factories can’t simply ramp up production to meet with the new and sudden demand from the U.S., and that the immediate outcome would probably be skyrocketing prices among premium Cuban cigars. Fine cigars are much like fine wines; it takes years and years to expand crops without sacrificing the quality of the final product.

In addition, there’s always the chance that the counterfeit market for genuine Cuban cigars will expand as well. Just a few years ago a sales representative for a cigar factory provided me with some alarming figures about the preponderance of counterfeits. Mexico, the place where many Americans go to score Cuban cigars, has a counterfeit rate of 85 to 90 percent. Canada, which many people believe is a far safer but slightly more expensive alternative to Mexico, can experience a 50 percent counterfeit rate.

Here’s the scary part, however — in Havana, Cuba, up to one-third of the cigars offered to tourists can be counterfeit. You heard me right. A genuine Cuban cigar isn’t even a sure thing in Cuba. As most experienced cigar connoisseurs know, you have to travel to places such as London or Geneva to ensure that you are always getting the finest Cubans — mostly due to the tight relationships European tobacco retailers have with the Cuban plantations and factories over the last couple of centuries. Other knowledgeable smokers also know how to spot counterfeits by such obvious giveaways as missing Cuban government seals on the boxes, or the quality and techniques used in the roll. (The Cigar Aficionado website, by the way, has an excellent page, with photos, on how to spot “fake” stogies.) I usually rely on my taste buds — I’ve smoked enough Cubans to know the difference after a puff or two.

I also provided my audiophile friend with another point, one that I usually don’t mention, and it’s this: every Cuban cigar in the world isn’t necessarily head and shoulders above every other cigar in the world. In the past I’ve talked about the unique climate and soil conditions, the talented and almost Zen-like rollers and the carefully monitored quality and lineage of the seeds that are responsible for the extraordinary quality of Cuban cigars. After all, you can have a Dominican cigar made from Cuban seeds, or Cuban torceadors rolling cigars with tobacco from other countries, and it’s not quite the same as a real Cuban cigar made by a gentleman who’s been sitting in the same chair at a Havana factory for the last 45 years.

But when it comes down right down to it, even the Cuban factories aren’t always perfect. Many cigar smokers discuss the Dark Ages of the Cuban Tobacco Industry, which took place between 1995 and 2005, give or take a year. For some reason — some people blame weather conditions, others blame the factories for lowering quality standards to meet global demand — Cuban cigars, as a whole, suffered a lapse in quality. They weren’t bad by any means, just not the best, just not as good as they used to be. Some of the great factories in other countries such as Nicaragua and the Dominican Republic started catching up during this time. You can see this leveling of the playing field in the annual Cigar Aficionado Top 25 Cigar ratings over the last couple of decades when classic Cuban cigars from Cohiba, Montecristo and other reputable marques no longer dominated those lists.

Before I go on, I have to admit that I’ve never smoked a Cuban cigar that was less than fantastic. I know why they are so highly prized in the cigar world. At the same time, I’ve also smoked plenty of non-Cuban cigars that were clearly just as good, if not better. While my favorite cigar of all time was a tiny little Cuaba figurado from Havana that took less than twenty minutes to smoke to its nub, many of my personal Top Ten are not from Cuba — such as the Padron No.45 Family Reserve, the Litto Gomez Small Batch No.1, the Davidoff Nicaragua Toro, the Arturo Fuente Don Carlos and a few others. These cigars can cost as almost as much as a great Cuban cigar, but they’re easily worth it.

But what if I told you that two of my favorite cigars, ones that I feel equal the best Cubans I’ve smoked in terms of flavor, construction and draw, can be bought for about $10 or less per stick? After our presentation to the Arizona Audio Video Club, I headed down to Churchill’s Cigars in Tempe, one of my favorite cigar stores in the country. I stocked up on two little gems, the Padron No.35 and the Curivari El Gran Rey, and they are both exquisite.

When I think about the greatest non-Cuban cigars in the world, the 1926 Anniversary Series from Padron immediately comes to mind. I’ve smoked nearly all of them, all the way up to special versions such as the aforementioned No. 45 Family Reserve and the world-class No. 85 figurado, the cigar I smoked on my 50th birthday a couple of years ago. There’s only one problem with smoking these beautifully textured powerhouses—they’re nicknamed “The Little Hammer,” by the way—they’re expensive. I think that No. 85 cost me more than $40, which is about the same price as a legendary Cuban cigar such as a Cohiba Behike BHK 52.

The No. 35, however, is the smallest stick in the line. A petite corona, it measures just four inches long with a ring size of 48. Like that truly awesome Cuaba, it’s good for only about 20-25 minutes before it’s gone forever. Because of that size, however, the No. 35 almost ventures into the affordable category—depending upon the store, they usually average about $11 per stick. That might sound like a lot for such a tiny little thing, but after you’ve smoked it you’ll truly understand the old adage that bigger is not necessarily better.

While the No. 35 has that same potent yet smooth flavor profile as a genuine Cuban stick, it also matches those lofty Cuban standards of draw and construction. As a result, this tiny cigar produces giant plumes of smoke, perhaps more than any other cigar I smoke on a regular basis. While there’s more to a cigar than just creating huge clouds of smoke around your head, that effortless draw should tell you that this cigar is expertly assembled by the world’s best torceadors. Second-hand smoke issues aside, the tiny No. 35 makes an incredibly huge impression. 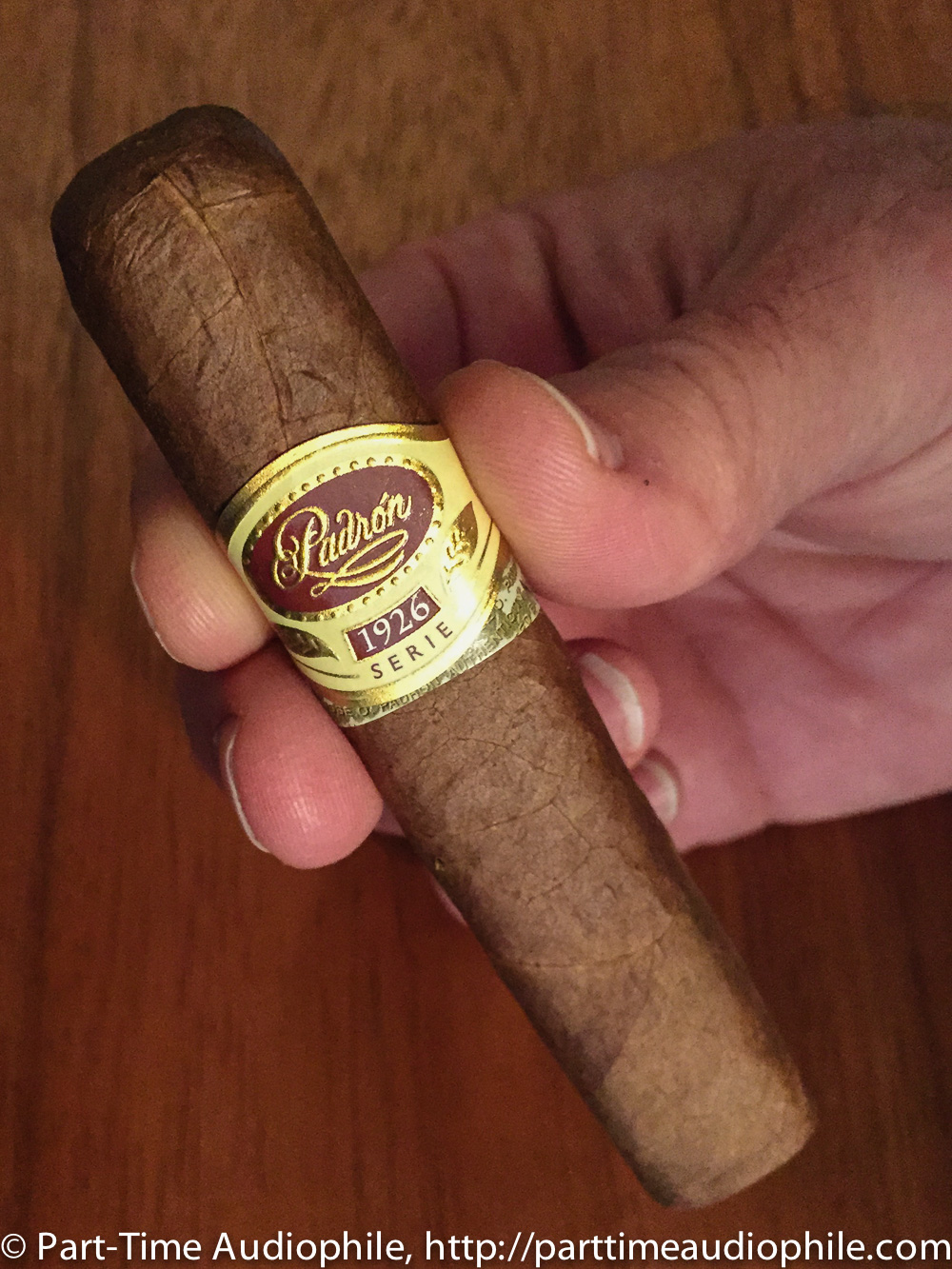 Funny story, but I had smoked about four of these beauties before I realized that Curivari was the name of the brand, and El Gran Rey was the just the name of this particular Curivari line. El Gran Rey seems like such a classic name for a cigar brand, a little unmemorable in the same way that a Chinese restaurant named Golden Dragon is a little unmemorable. But for just about $8.25, the price I paid at Churchill’s, you can have a relatively inexpensive cigar that easily achieves the Triple Crown of flavor, construction and draw.

I have a bit of a sentimental attachment to this cigar as well. A couple of years ago I interviewed tenor saxophonist Daniel Louis White for Perfect Sound Forever. He was working part-time at Habana House, my primary cigar store in Austin, so he invited me down so we could talk and smoke cigars. At the time Daniel would actually work a few weeks at HH and scrape up enough cash to complete work on his LP, Natural Consequences. Before we started, I asked him to tell me his favorite cigar in the entire store, and he picked the Curivari. I’d never heard of it before—the red and gold band was so old-school-cigar traditional that I never even noticed it among the fancier boutique cigars with their much more distinctive bands.

If you listen to our original recorded interview, you’ll hear me pause every couple of minutes to say, “Man, this is an incredible cigar!” (You won’t hear Daniel nodding in agreement, but it happens every time as well.) Light in hand, easy to draw, a perfect blend of complex and powerful flavors without a trace of harshness, this cigar had all the earmarks of the best Cubans. The only downside to this cigar is that it’s relatively hard to find — I think Curivari is still a relatively small company with a relatively low output. But if I see it in a cigar store, as I did in Phoenix, I grab a handful. 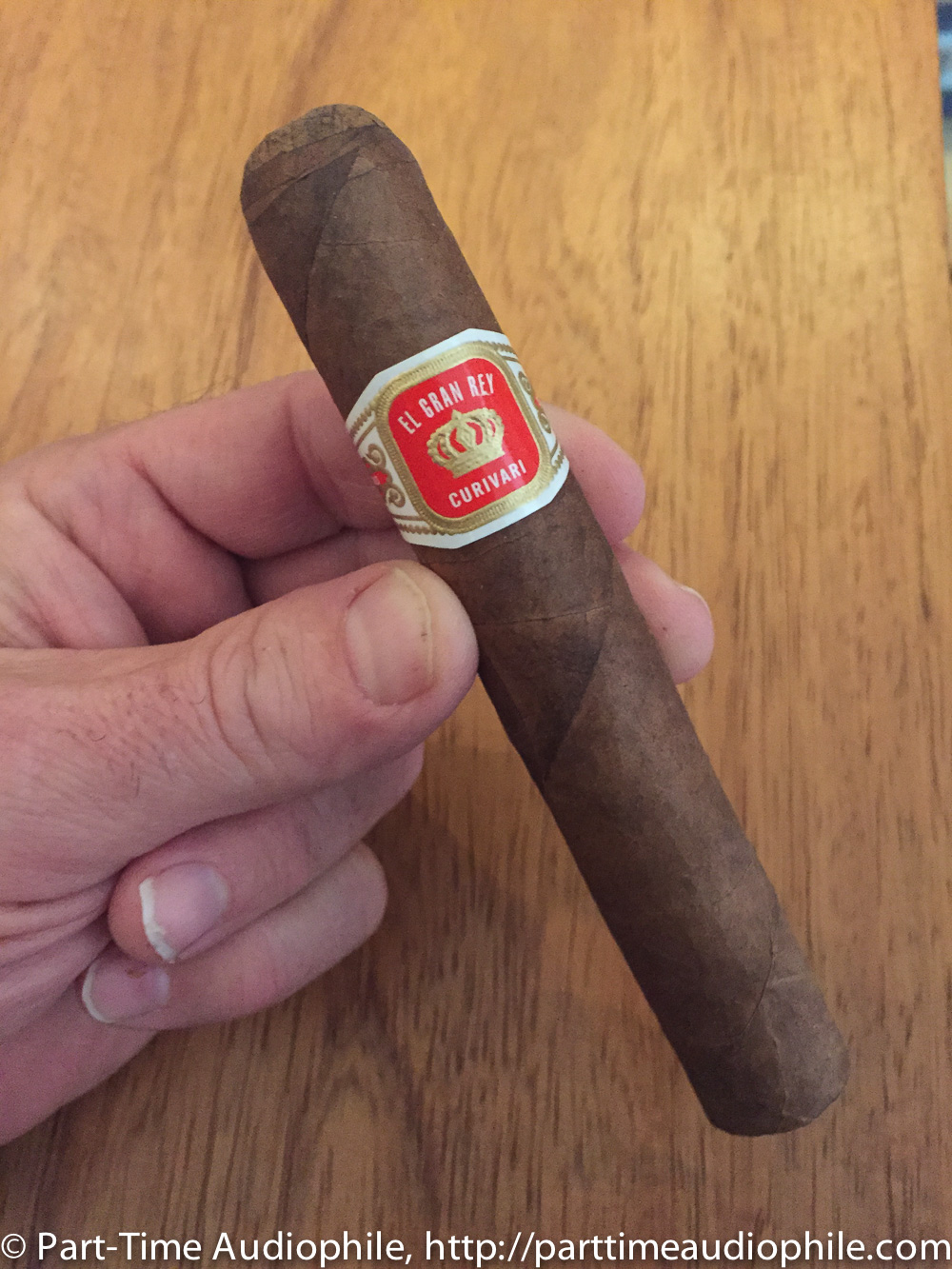 I know there are plenty of seasoned cigar smokers out there who wear a sign around their necks that say, “Havana or Nothing!” But for every cigar snob who constantly incessantly about his “Cuban connection” and how every other cigar is second best, there are plenty of cigar smokers who enjoy more than just a taste of the very best by being less Havana-centric. Both the Padron No.35 and the Curivari El Grand Rey will satisfy in much the same way, and you won’t have to go broke or violate international law — at least for now — to experience them.

The Smoking Jacket: The Flavored Smoker

By Marc Phillips “Why, them cigars are fer Girl Scouts and Methodists!” In the world of serious cigar smokers, flavored and infused cigars don’t get a lot of respect. Go onto an online cigar forum […]

The Smoking Jacket: The Ballad of El Gordo

By Marc Phillips “It looks like you’re smoking a big sausage!” For years I’ve been fond of the 6 x 60 cigar size, long before the nickname gordo became the acknowledged nomenclature. There’s something about […]

By Marc Phillips “How much longer are you going to be smoking that cigar?” I’ve been smoking high-quality premium cigars for about 17 years now, and not once has anyone approached me in public to […]