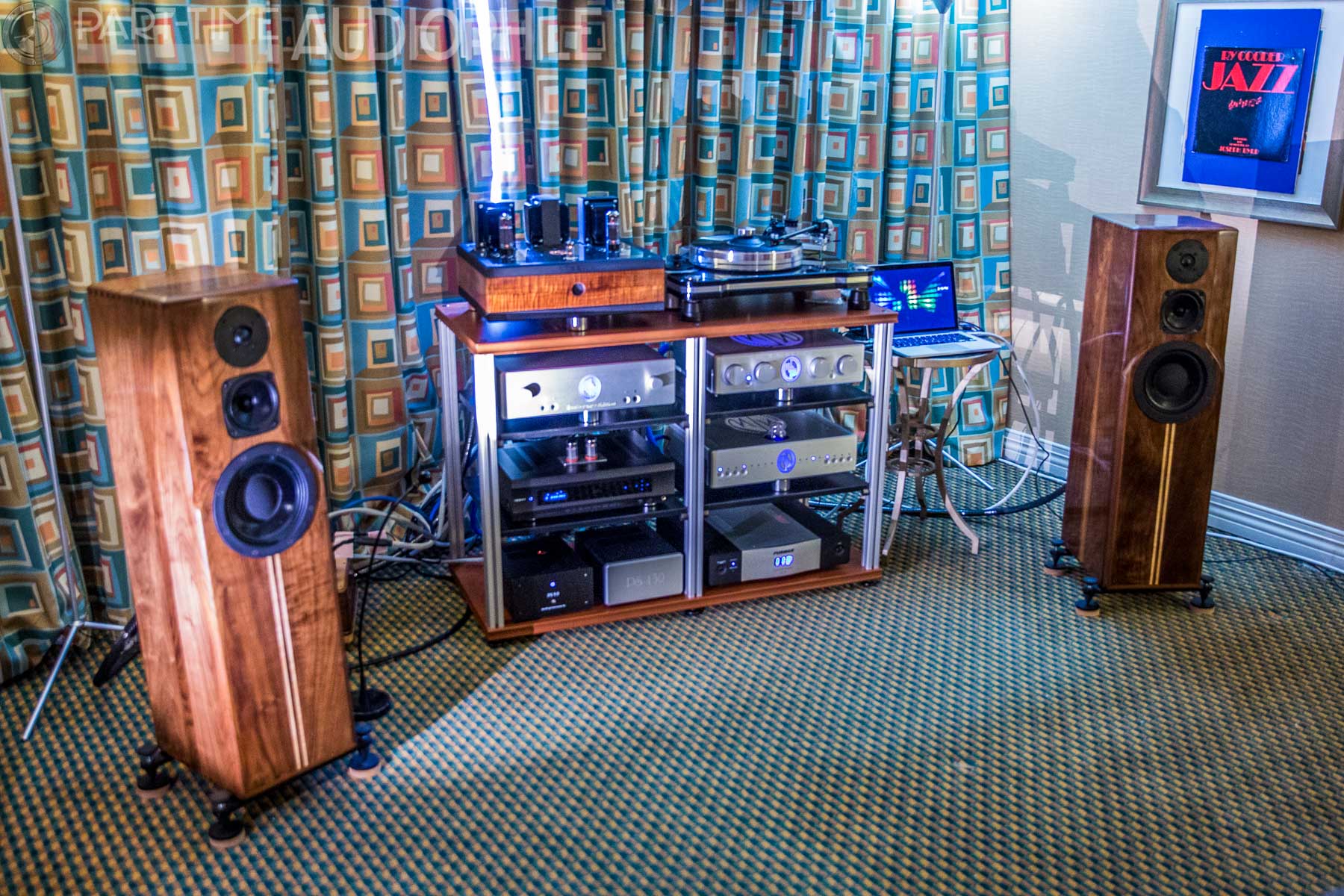 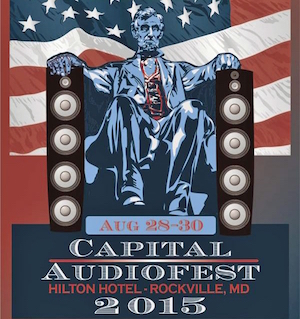 ModWright was showing off a brand-new all-tube venture in concert with his partner-in-crime, the wood-working wizard behind Daedalus Audio. The new widget? The Ambrose, an EL-34-based single-ended pentode amplifier! Apparently, this is a test-shot — a whole host of delectable designs sit behind this one. Ambrose doesn’t really have much in the way of specs, much less pricing, but it’ll be reasonable to expect it to be $$$. A little bird told me that RMAF will see a much more powerful amp, too, so know that we’ll be watching these developments closely.

Scott Dalzell of DC-local Viva HiFi was lucky enough to have the Ambrose wired up to a suite of over-performing ModWright electronics, including the also-brand-new SWL 9.0 “Anniversary Edition” tube preamplifier ($TBD, but I’m wagering it’ll be less than the LS100, which retails for $3750).

Also, I saw one of my favorite current-production DACs — the extraordinarily sexy Elyse DAC ($6,900), a 24/192-capable (no DSD at this point, but rumored to be a future upgrade) converter with an internal tube-rectified PSU. Another favorite (I’m beginning to think this is a trend): the PH150 phono stage ($7,895) with some delightfully chunky front-mounted knobs perfect for dialing in your phono cart’s particulars.

WyWires‘ newest Diamond Series interconnects (starting at $4,495) and speaker cables (starting at $7,999) are a shocking departure from the more value-focused history the brand has carried to date. I’ve spoken to designer Alex Sventitsky at length about what’s going on in there to warrant the big jump in price, and quite frankly, it’s not inconsiderable. It’s also hard to describe — but there’s a proprietary blend of conductors in the mix now, and the overall topology is best described as “complex”. I’m going to dismiss out of hand any contention that “cables don’t matter” — as David Salz of competitor Wireworld has convincingly shown, cables not only matter, they can matter quite a lot (though, to be fair, maybe not as much as some other system components). My personal experience with the Diamonds (I have a full loom here at home) has convinced me that these are by far WyWires’ best work to date. Their contributions, again, according to my own experiences, are very close to what I believe to be no-loss, but I hope to get some gear to let me test this. In the meantime, I’m just happy as a pig in a poke to use them. Also in use, a new Platinum series USB (starting at $899), Silver Series power cords, and a Daedalus/WyWires joint venture, the Power Broker AC distribution ($2,499).

From Daedalus, Scott had selected the Athena v2 ($11,950/pair) loudspeakers, shown here in solid walnut. I know, “solid wood speakers” may be somewhat anathema to “true neutrality seekers”, but I’m not convinced. Anyone unfortunate enough to have to actually move a Daedalus speaker around will know that they are filled with lead. Or something. Maybe iron. I have no idea, but there’s really no reason they should weigh that much — I’m told that the 80lbs/side curb weight has to do with the absurd amount of internal bracing. Not having a chainsaw handy, I was not able to verify this. According to Daedalus, the Athenas care capable of reproducing 35Hz to 24kHz from their driver complement, which includes bits from Eton and Fostex. At 95dB, the Athen can also handle up to 300 watts — so, no need to be scared to dump power into them. A fun feature — there’s a toggle switch on the back that lets you change the tweeter response by about 1dB worth of swing. Got a dull room? You can add a bit. Got a hot room? Get some room treatments — and turn the tweeter down. Flexibility is a good thing. As with all Daedalus speakers, the craftsmanship is humbling — this is heirloom quality stuff here, folks. And note — the look is very flexible. Got a goal, or a particular look/color you’re interested in, talk to Lou Hinkley, the designer about the wood that he’s dragged into the shop.

Last but not least, the VPI Aries turntable with a 12″ JMW 3D tonearm ($10k) and a Dynavector XX2 cartridge.

By Rafe Arnott 8:00 p.m. Friday Edward Ku of Element Acoustics in Vancouver has an infectious smile and genuine love for high-end audio. His three room set-ups were well thought out and displayed a real […]

I heard, almost by chance, that Greg Roberts of Volti Audio had snuck into CAF with a brand new prototype that he’s calling “Rival”. Rival, that is, to the big brother “Vittora”. If that $25,000 […]

At a recent high-end audio show I sat with a group of colleagues in the hotel lobby and discussed, as we often do, what we had seen that was worthwhile. One person asked an interesting […]