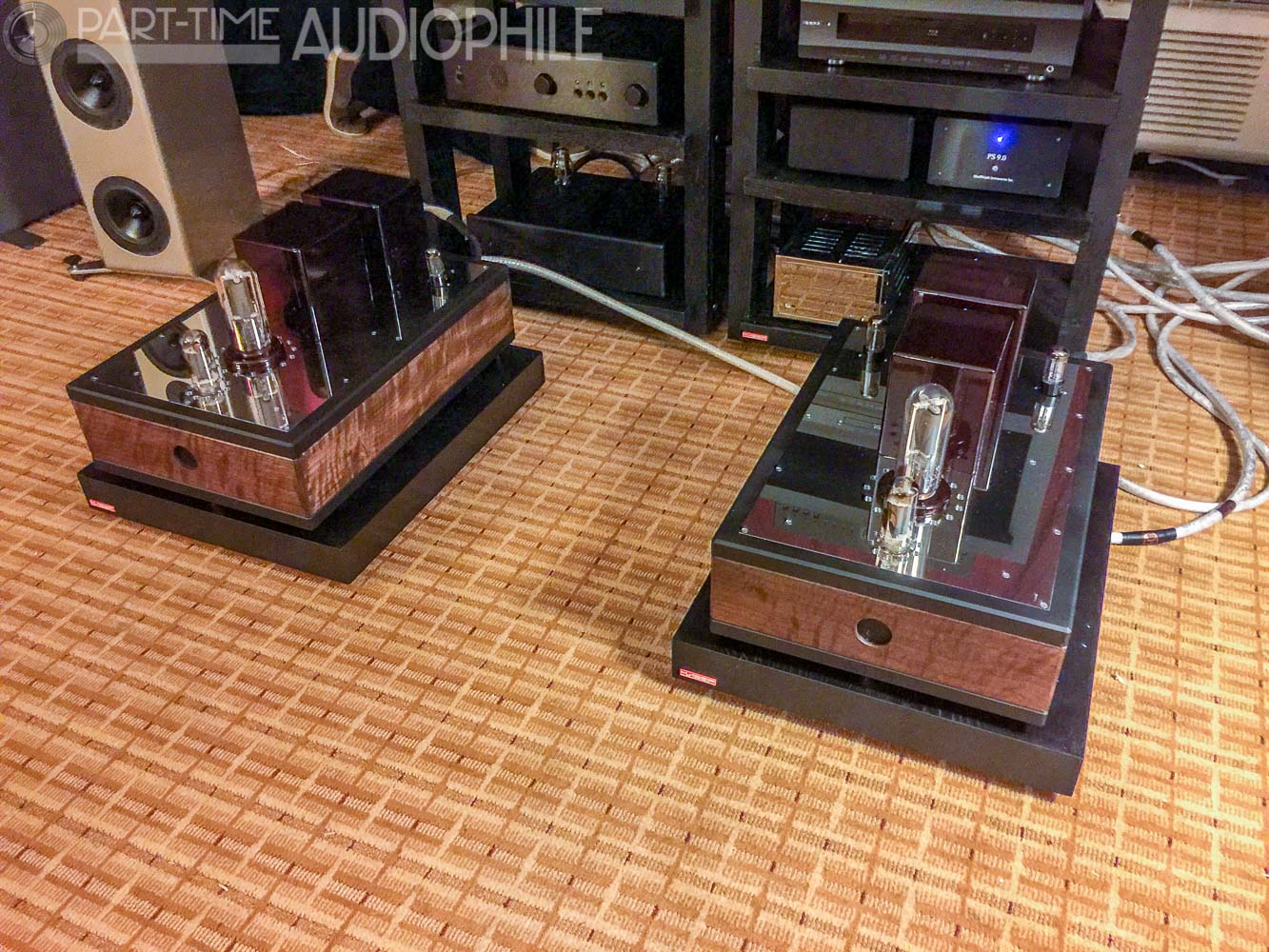 “Come over here, John. There’s someone you need to meet. He’s got some awesome new tube amps….”

I had barely draped my press badge around my neck after checking in Thursday evening at the Rocky Mountain Audio Fest. I took a few steps across the lobby at the Marriott Denver Tech Center and ran into the Esteemed Editor, holding court, talking DACs in all his disheveled, techno-nerd glory — I mean, with all his Jon Hamm-like wit and charm — and motioning me to follow him.

I thought I had arrived early, but it seems the Scot had not only checked into his room, he’d already been to see an exhibitor and get a demo on one of the buzzed-about product launches happening this weekend.

The pre-show reception was just getting started, but the atrium was beginning to fill up with clumps of audiophiles shaking hands and tossing back various beverages.

Immediately I tried to block out a mental image of the Esteemed Editor, down on all fours, his posterior jutting up like the Rockies themselves, pants dipping far too close to licensed plumbers’ territory, getting those crazy close-ups he’s known for.

“Really,” I replied, hiding a momentary smirk with my official RMAF program. “I’d like to hear them myself.”

Minutes later, the kind and very patient Dan Wright opened the door to his eighth-floor suite. There, three other men were tweaking what looked to be a very formidable rig. My sudden appearance distracted one of the system builders and there suddenly was a blast of static.

“….Excelled at recreating deafening white noise….,” I quipped, pretending to be making notes.
Luckily someone in the back of the room laughed instead of taking me out in the hall and giving me a good pummeling,

Relieved, I settled into the center seat, took out my real notebook and started quizzing Wright about what I saw before me, which may have been the most beautiful pair of tube amps I’ve ever seen.

“They are 32 watts a side. Normally you’d only get 20 watts or maybe 25 watts a channel from 845s. But the way we’ve designed the circuit and implemented the tubes, we can push that higher. Having 32 watts enables you to be able to use a broad range of speakers, not just horns.”

I asked Wright about his inspiration for the design.

“I heard a 10-watt, single-ended EL34 amp design by Jack Elliano of Electra-Print, based on his ’Isolinear’ technology,” he replied. “The benefit of Isolinear design is to offer lower intermodulation distortion as well as low total harmonic distortion.

“To my ears, the result was all that I had been missing from tube amps of the past. This was a turning point.”

Wright wound up visiting the generous Elliano for a week, videotaping the master at work and soaking up all the knowledge that he could.

“I felt like a Jedi in training,” Wright said.

Only after that journey did the student feel prepared to unleash the force of 1,200 watts on the 845s, combining what he’d just learned with all of his own tricks in modification and vibration control.

For some reason, of all things, Kenny Rogers’ The Gambler was playing repeatedly on vinyl during setup as we spoke. Immediately, another mental picture came into my mind, this one of Rogers weakly warbling the same song in a recent Geico commercial.

I looked over at Wright and he was grinning, too. “Wow, that takes me back to high school,” he said.

I handed him my CD of Donald Fagen’s Morph the Cat. He cued up the title track.

The first thumps of bass were promising, going lower with more control than most tube amps can muster.

Then Fagen’s voice entered, so lifelike I wanted to clean the spit off the microphone.

“That’s the magic of this amp,” Wright said.

I listened carefully all the way to the end of the odd song about a spectral feline, and then handed Wright another favorite, Dire Straits’ Communique.

As Mark Knopfler kicked off the opener, “Once Upon a Time in the West,” the finger-picked notes from his Fender Stratocaster seemed to hang in the air forever, while Pick Withers’ expert mix of time and fills propelled the track forward. The background was as “black” as one could imagine, allowing the other instruments to be heard with admirable clarity.

I asked for one more track, the lead-off from John Coltrane and Johnny Hartman’s self-titled, one-off jewel, remastered by Mobile Fidelity Lab. “They Say it’s Wonderful” was 5:09 of bliss, with Hartman’s voice caressing the speakers like a velvet glove on a beautiful woman, and Coltrane’s restrained accents floating above the slightly wandering rhythm section.

As the cut ended, I reflected on what I’d just heard. It seemed that the mono blocks’ best attribute truly was the midrange, which came off palpable but silky smooth. The presentation in this frequency range also seemed to be ever-so-slightly recessed, which only worked to pull the listener into the music and showcase the other instruments being played.

Bass and highs were surprisingly strong, too, although they fell a bit short of the best high-current, high-watt solid state gear out there. In other words, this is still a system for those who like a touch of warmth, but it does go farther than most tubes toward neutrality. There was no smearing or congestion, only an instant connection with the music.

I’d be remiss at this point if I didn’t identify the other gear in the system:

When the house lights came up for more pictures, these by me, shot standing up or in a half-crouch — no potential plumbers’ union problems here — I really could appreciate the stunning job Wright has done in hand-crafting the 845 amps. And “crafted” they are, made of all USA parts and put together right here in the home country. The materials are appropriate for a pair of mono blocks that Wright guesses will retail for about $40,000 to $45,000. The top is mirrored stainless steel, bonded to aluminum billet. The wood trim is instrument grade walnut. Custom finishes also will be available.

“Before I built these, my feeling was that a combination of tubed preamp and solid-state amp was the best. Now, though, I feel I’ve found a tube amp that performs well in the bass and highs,” Wright said.

It’s obvious that Wright’s ears have been well-calibrated by his 25 years in the industry. He earned his reputation first by doing modifications (hence, the name ModWright), and then progressed to designing his own electronics.

As he now prepares to market his cost-no-object statement, he is transitioning the name of the company to MWI. So don’t get confused.

All that’s left now is to get a demo of your own. Be warned, though. After it’s over, you may find yourself calling up your bank’s web site and clicking on “second mortgage.”

That’s OK. Too much gear these days is designed to be a placeholder for Mark II, Mark III and so on. But these 845 mono blocks are heirloom pieces that your grandkids would be happy to get someday.

Who can put a price on that?

I’ve had this argument before with United Home Audio‘s Greg Beron. Why “tape” — isn’t this just a pointless throwback? Totally redundant to good vinyl? I mean, seriously, why another analog source — isn’t everyone […]

Chances are, you have an opinion about passive line stages, though in terms of “burning questions”, this particular polarizer seems to have dimmed a bit in recent years. The issue, at least as I can […]

I’m sure this is not the Denver RMAF 2015 wrap-up that anybody wants, but too bad, this what you’re getting…. I’d had too much coffee. I could literally feel my blood pounding behind my slightly-bulging […]