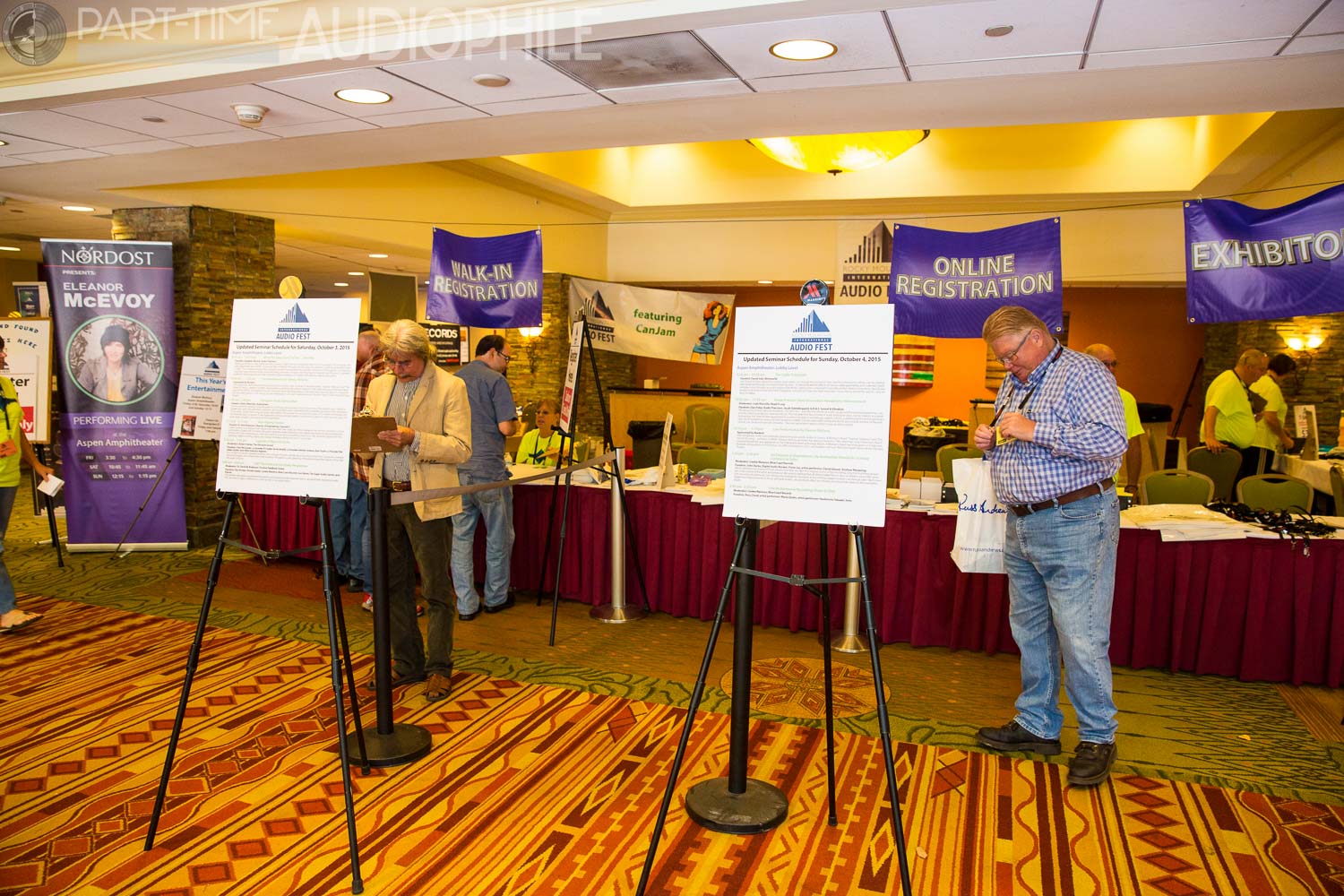 When good old Shakespeare put those words into the mouth of Henry V, he was thinking about the siege of Harfleur and the Hundred Years War. Luckily, attending the Rocky Mountain Audio Festival is only similar to such a conflict in that masses of humanity are compressed into a small area. I’ve attended every RMAF since its inception and I’ve always enjoyed the general tenor of the thing: relatively small, relaxed, and almost always friendly. And, as all are pretty much “dear friends”, there’s no need to come armed with anything other than my own LPs. But whenever I attend an audio show, I can’t help but think that sometimes it’s a bit like planning an encirclement maneuver: how can I visit the all the rooms that pique my interest without driving myself loony? So my approach has always been to take a look at the show guide, take a deep breath, and recognize that I probably won’t get to every exhibit on my list and that, in addition to providing my thoughts to this illustrious e-zine, I’m here for enjoyment.

As a seasoned observer, you might say, I thought that the attendance at this year’s show was significantly down compared to other years. That’s my own impression, but it was confirmed by a number of exhibitors. Other exhibitors, however, told me that, other than a rather dead Friday, the traffic in their rooms was at or above that of previous years. So I’ll leave you to ponder the reliability of my perceptions. But, whatever the actual attendance, the show maintained its tradition of friendliness and low-keyed-ness.

Before I get to specifics, I want to address a topic that comes up during and after audio shows: the general unfitness of the rooms and/or power. There’s always a murmuring chorus—spoken and written—expressing some dissatisfaction with room size, shape, wall thickness, AC stability and other technical shortcomings. It’s a caveat that’s so pervasive that it seems to be accepted as if it’s a law of the universe.

Just like almost everyone else (apparently), I’ve accepted these “limitations” and used them to rationalize those instances of sub-par performance to which they’d most likely apply. This year, however, I’m not going to do it. Why? I know I must be pretty slow on the uptake, but I was doing a little thinking (eek!) and I realized that I was considering audio show sound from the wrong perspective, that is the perspective of the exhibitors and, shall we say, the apologists. Think about it: how many audiophiles have a perfectly shaped room—or even a dedicated room, for that matter? How many audiophiles have really clean power? My guess is that a large percentage has neither. In fact, these hotel rooms may be better than many of the rooms that are in actual use in that all the furniture has been moved out to accommodate the system. How many of us have that option?

Mind you, there are surely some legitimate and semi-legitimate excuses for less-than-stellar sound: the equipment was damaged in shipment, the shipment didn’t arrive until ten minutes ago, or it’s time for the B team because shipment didn’t arrive at all. But I’m not buying the room or the power excuses this year. And the fact is that, show after show, there are exhibitors who wring excellent sound out of the hotel accommodations in which they’re ensconced, whatever the putative limitations. So it is possible.

Although it’s difficult to generalize, I’ve found that rooms that are managed by a single distributor or dealer seem to have a better chance of reasonable performance. The reason being is that there’s someone who knows the potential of the system and each piece of gear that goes into it, as well as how the system will perform in the available space. Conversely, I’ve found that rooms shared by a number of exhibitors can be a hit or miss affair. My own theory is that everyone wants to show off their best and brightest, despite the realities of the system and environment, which can lead to systems that aren’t very well matched, which can lead to sub-optimal sonics. One obvious example you come across year after year is the “too much speaker/too little room” syndrome or its reverse: “too little speaker/too much room” syndrome. And it’s only natural that when a room has many masters there can be a multitude of opinions as to what constitutes good sound. Result: the system’s performance potential is often “left in the locker room”.

Okay, let’s get to what I heard, saw, and possibly imagined. As always, when I’m talking about what I heard in a particular room I’m talking about the sound of the system. There’s no possible way I can infallibly determine the degree to which each component contributes to what I heard. Sometimes there’s an obvious suspect, but even then I believe pinning an unfamiliar system’s performance — or lack thereof — in an unfamiliar environment, based on (at times) unfamiliar source material on a single component, piece of wire, or what have you is a fool’s errand. Even though I’m foolish at times, it doesn’t mean I’m a fool — although that’s debatable.

As Glinda recommends in The Wizard of Oz, I’m starting at the beginning: my first stop at the show . . .

GamuT and the Lobster Invasion! 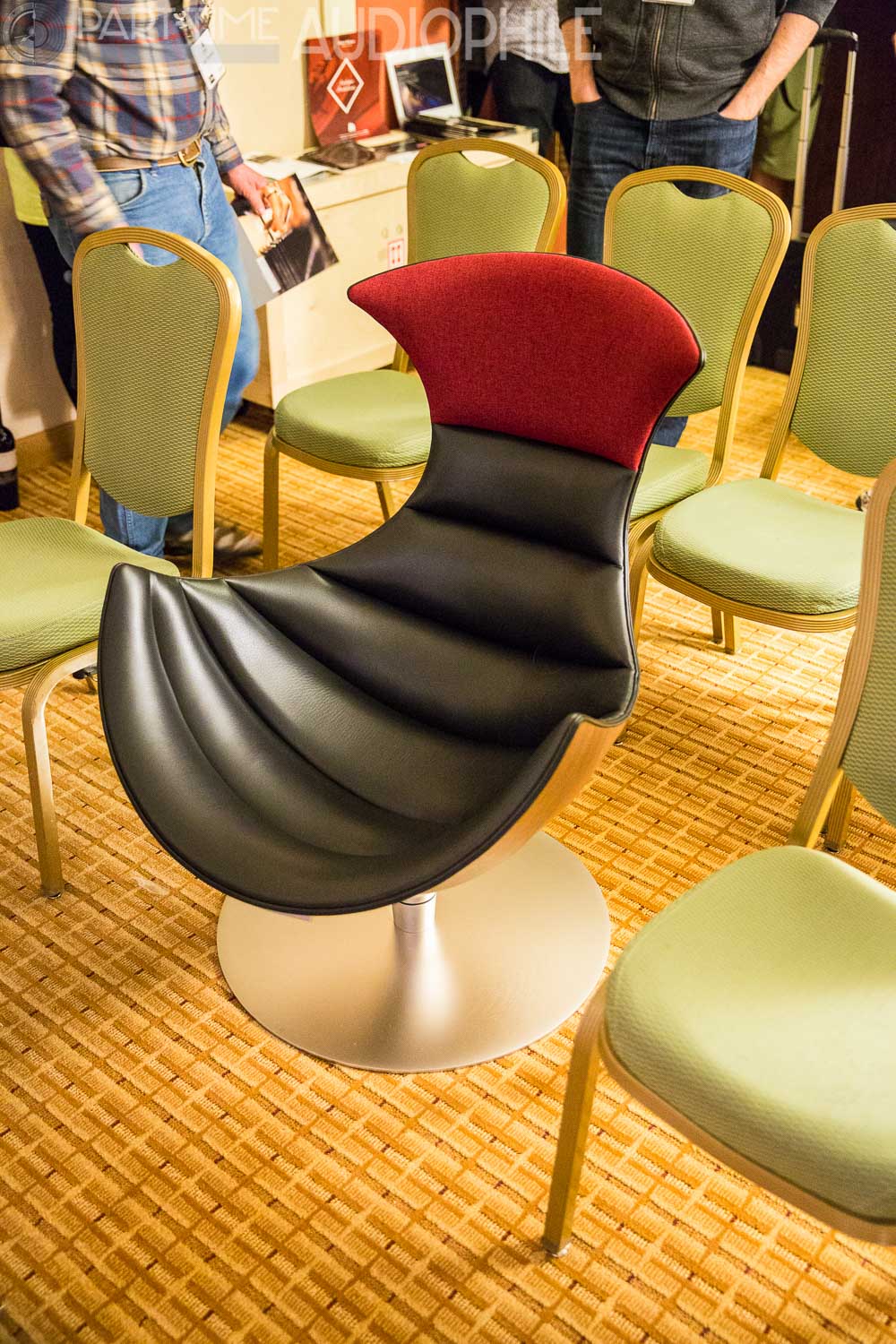 Crustaceans of the world, you have your furniture. Enter the Lobster Chair (circa $5.5K, without footrest), from the folks who bring you GamuT. There was a special press preview on Friday morning, before the opening of the RMAF, during which those of us who wandered in could have a sit and listen to the GamuT system. Unfortunately, either I’m very picky about chairs or the Lobster Chair is simply designed for someone whose physique is other than mine—or more lobster-like. I found it too low and quite uncomfortable; two factors that eliminate it from consideration at Casa Lindberg. But it had very little cross-over distortion! Seriously, however, when I escaped from the claws of the Lobster and planted my butt in a more Darryl-compatible seat, I found the GamuT system in this room to be excellent, even without the chair’s intervention.

The system featured the D3i Dual-mono preamplifier ($8.3K) and M250 mono amplifiers ($25.8K/pair) connect to a pair of RS7 floorstanders ($40K) all lashed together with GamuT’s wire (price varies). The source was analog when I was there: a Pear Audio Blue Kid Thomas Cornet 2 turntable and tonearm ($10K). I didn’t get to play any of my LPs at the press preview, but when I came back they spun my Franz Berwald Piano Trio disc (Outsider 110) and the sound was lovely: all the instruments—especially the piano—realistically reproduced and in proper perspective. Luscious, even without drawn butter! 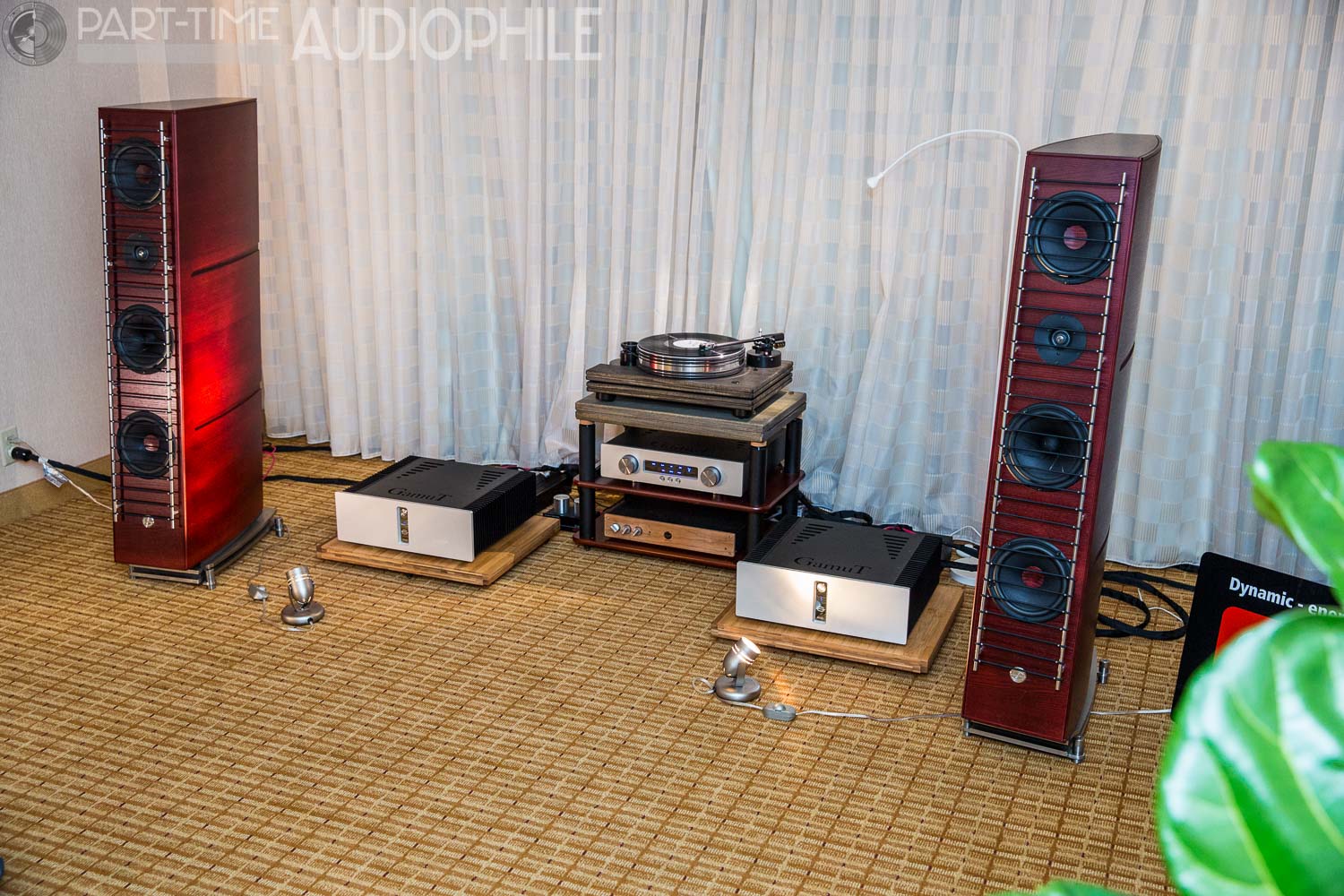 It’s always great seeing Andy and Sue Regan at JH Audio.  Great, fun people with tremendous product knowledge and a relaxed air about them.  They really had a nice setup at CanJam this year and […]

RMAF 2012, the lineup from h-e-doublehockeysticks

[Editor’s note: Lighten up, people. This post discusses a logistical challenge facing any and every single attendee planning to make it to RMAF this year. It’s not intended to insult anyone, either their capacities or […]

RMAF 2017: HiFi Man Surprises on the High and the Low

I ran into Andy Regan at the Pint Brothers bar at RMAF on Friday when a good number of us audio nerds were having beers and a very late lunch.  He said he had moved […]