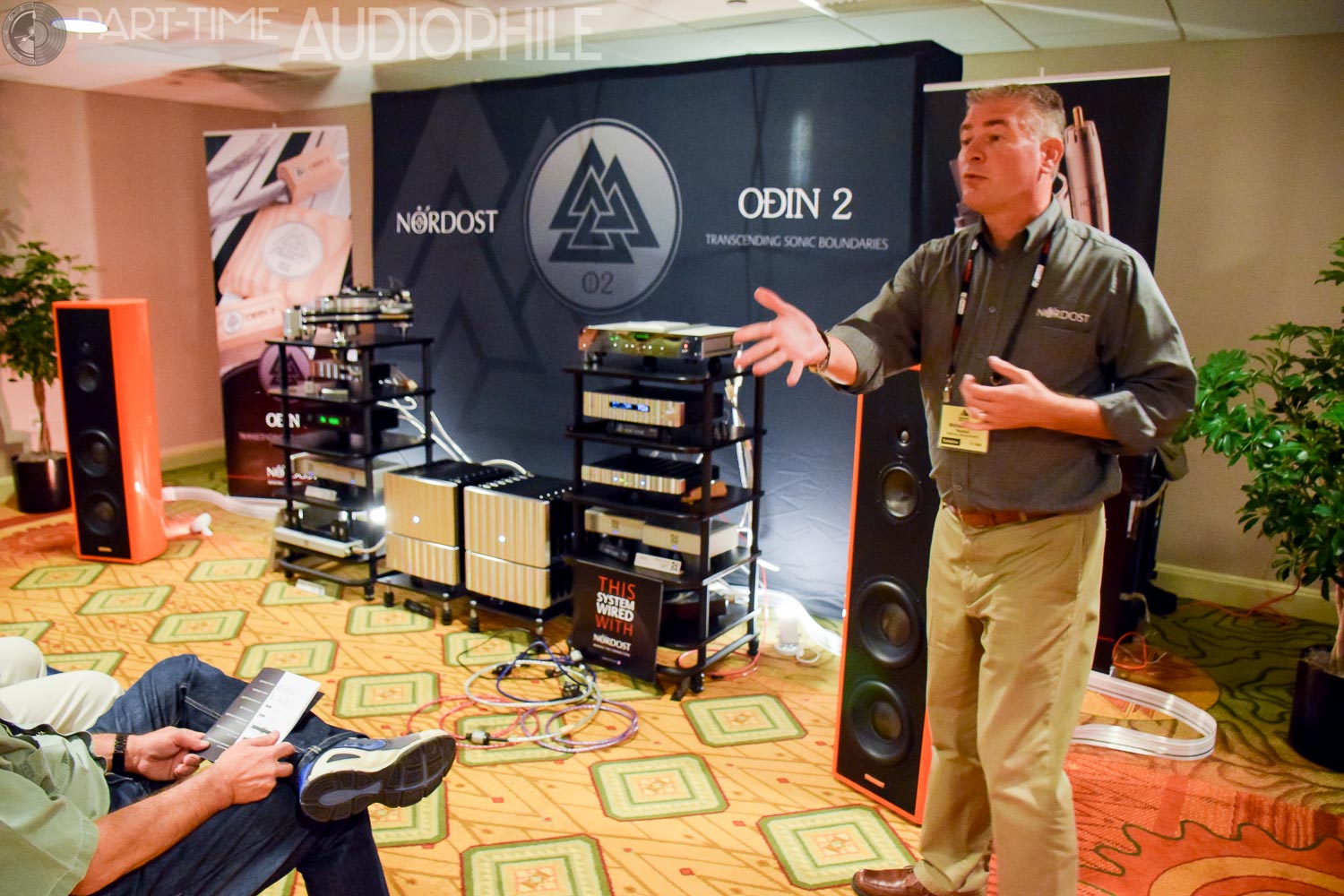 It seemed totally insane at first glance. Then, after a second look — and a listen — it made perfect sense.

Nordost was demonstrating two tweaks in its mezzanine room at the 2015 Rocky Mountain Audio Fest. Neither one cost more than a few hundred dollars. But the system Nordost was using to demo them was probably was close to a half-million dollars. Cable alone was, according to a Nordost sales rep, “north of $350,000.”

Suddenly, I felt my consciousness floating outside my body, looking down as my head exploded.

“Here’s what we’re demoing,” the rep, Michael Taylor, said, after my mind returned to the corporeal plane.

He handed me a small, rounded object, about the same length as a tube of lipstick but twice as big in diameter. It had a standard electrical plug on one end.

“This is the QK1 ($250 each). It has a load-resonating coil to fight vibrations. It works mechanically.”

Next, he handed me a similar-looking device. “This is the QV2 ($350 each). It has a circuit board, since it is a frequency generator. It sends midrange and upper-bass harmonics through the AC to fill up holes in the signal.”

Taylor cued up a female vocal test track, without the tweaks. Playing on Jeff Rowland electronics and Magico S5 speakers, it sounded lovely.

“Now, with one QK1,” he said, plugging the device into a Nordost power strip. He repeated the track.

“Now with two QK1s,” Taylor said, plugging in another object and playing the song again. “Now, adding the QV2,” the rep announced, repeating the song before plugging in a second QV2 and going through the process one more time.

“The sound has a much bigger soundstage. It’s gets deeper and fuller every time you add one of those things,” said a gentleman on the front row. “It really works,” said another, slightly dumfounded. “The bass is tighter,” said a third.

I noticed the same improvements, but I still was trying to get my brain to repair its blown synapses at the mention of $350,000 in wire.

Nordost is known for its flat, hi-purity, computer-style cable. They are often praised for their speed, neutrality and tonal balance.

The overall design and materials used are not cheap nor can they be obtained in bulk, ready to cut and crimp onto off-the-shelf connectors.

“It can take an hour, for instance, to make a meter and a half of our (benchmark) Odin 2 cable,” Taylor said.

“You know, some manufacturers want you to believe there’s meaningful performance differences to be had with cable lines that are priced $20 apart,” he said. “But it just doesn’t work that way.”

Feeling pressure building inside my skull again, I circled back to the QK1 and QV2.

“The QV2, especially, tends to work better in pairs,” Taylor said. “You can plug the QV1 and QV2 in anywhere, but they need to be on the same circuit your system is on.”

That’s when I finally “got it” and my head returned to normal size. When you’re doing an A-B demo, if you are going to be able to hear the instant change from adding anywhere from one to a handful of tweaks, you better be sure the rest of the system approaches state-of-the-art neutrality.

I’d had a similar experience with Nordost at previous audio shows, attending A-B demos of the company’s speaker cables, interconnect, power cords and even USB connectors.

To Nordost, it’s a simple approach — everything matters. But be warned: Listening could recalibrate your brain.

by Darryl Lindberg As you might expect, the best sound I heard at this year’s Rocky Mountain Audio Festival was emanating from a live source, specifically pianist Robert Silverman’s Saturday evening performance of Bach, Mozart, […]

There was a lot to like here. I know I’m supposed to be paying attention to the tonearm, which looks awesome … but did you see those Zu Audio Definitions? Wow. Nice veneer! I have […]

My publisher stumbles upon me in the halls at Rocky Mountain Festival 2017 and tells me that he’s caught wind of something special inside the Can Jam. What exactly has Scot found? A small company out of Glasgow Scotland called RHA Audio. […]