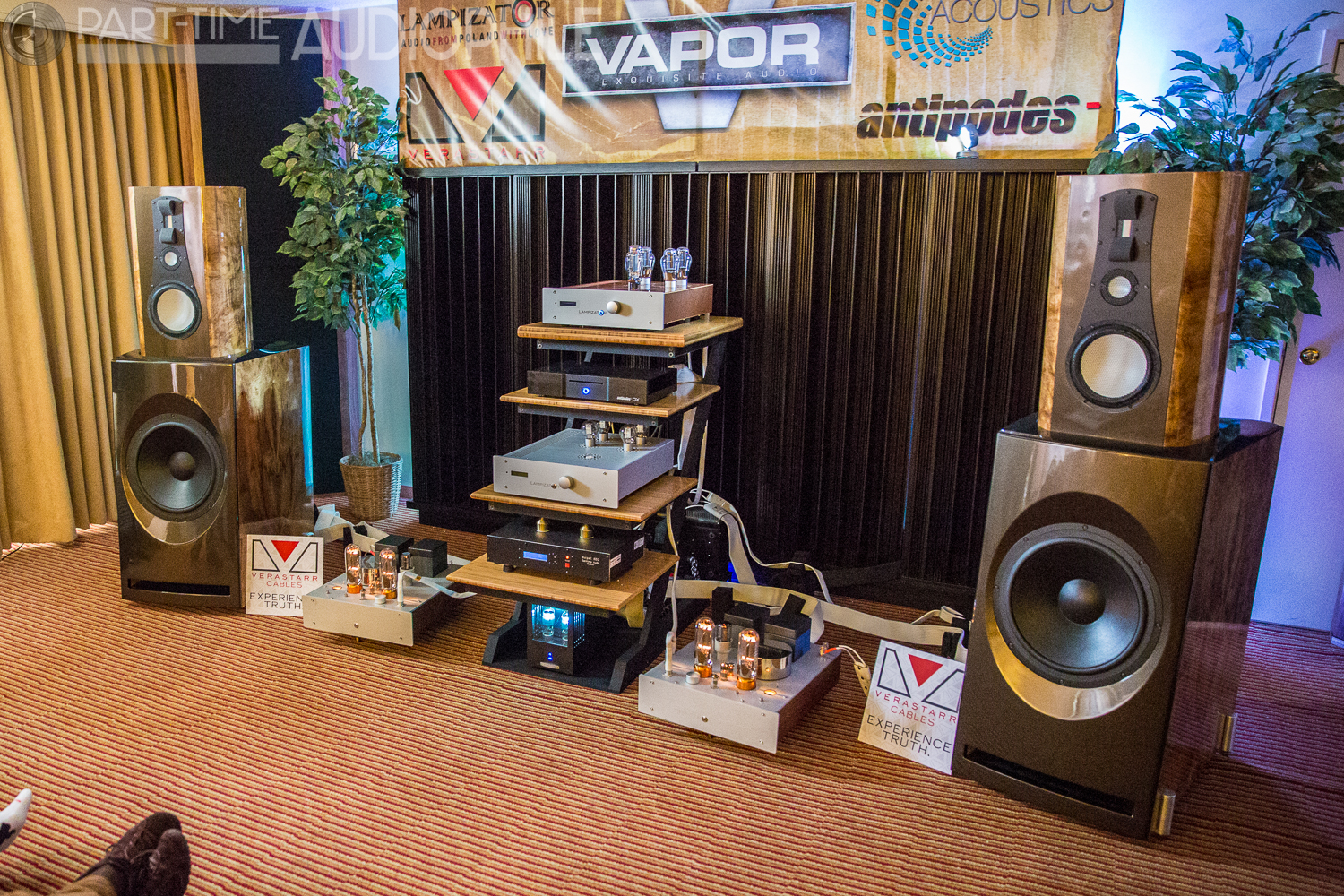 I’m partial to big speakers. While I can appreciate the precise imaging of minimonitors or the efficiency of compact floorstanders, I still crave the full-size soundstage created by many large transducers. That’s why I was encouraged by my first look at the new, hulking Perfect Storm model from Vapor Audio.

What creates a Perfect Storm? Vapor says it’s a combination of some of the world’s top-quality drivers installed in a carefully made enclosure designed by Finite Element Analysis. More specifically, the company uses a 15” sandwich cone woofer from AudioTechnology and a RAAL 140-15D tweeter.

The midrange, though, is where this speaker really gets interesting. Vapor chose an Accuton C51 Cell to bridge the gap between a second, larger midrange driver and the tweeter. The bigger — 8-inch — midrange is one of two models. The “black” version uses an AudioTechnology cone while “white” units use an Accuton mid. The customer decides which model he or she prefers. The black model is said to offer more refinement and a slightly more rounded presentation, while the white version maximizes speed and detail.

These drivers are mounted in an innovative cabinet that includes a bass module offering nearly 7 cubic feet of space. Baltic Birch plywood is CNC-cut, stacked and laminated to produce a box that approaches zero diffraction, Vapor says.

The company also offers crossovers with VH Audio standard capacitors or custom options such as those from Duelund RS. Inductors are virgin copper wax/paper from Jensen, and resistors from Duelund. Internal wiring is by Verastarr. A new binding post plate can accommodate up to quad-wiring.

Vapor says it can fulfill almost any paint or stain order.

All of that technology weighs in at 360 pounds each, so it’s unlikely you’re going to be fiddling with positioning a whole lot after getting them installed. Oh, yeah, the cost is $44,995 a pair.

Vapor was playing Queen’s “Bohemian Rhapsody” while I visited. The Perfect Storm did a good job of presenting the track’s transients and wide dynamic range. The vocals and high-end, on the speaker’s “white” edition, sounded a bit crisp, though. I look forward to hearing the “black” version in the future to see how its smoother midrange output compares. This is one Storm to keep on your radar.

Dave Slagle builds oft-talked about (and lavishly praised by my brother from another mother Malachi Kenney) autoformers, he is a champion of the modest audiophile with his EMIA gear which features the EMIA phono stage, […]

This year, RMAF started off with a bang. But not for me. For me, it started with a long series of groans, whimpers and even some abject weeping. Okay, maybe not that last, but it […]

I have to admit that I am a Johnny-come-lately to the whole SET thing, but that doesn’t make me any less a fan. I’m just starting on my complete loving of that scene. And what’s […]