When I opened a cigar lounge in Kyle, Texas back in 2011, I took a rather didactic approach to my marketing efforts. At the outset of this venture, one of my cigar distributors asked me a very serious and very good question—can a cigar lounge really succeed in a city of that size? I knew that the answer was yes, as long as I made an equally serious effort to introduce my customers to the joys, rituals and nuances of smoking premium cigars—especially in a community environment such as a lounge.

That meant, of course, answering a lot of questions from the newbies—not to mention replacing a lot of cigars that had been destroyed due to “human error.” (For instance, if someone brought back a cigar that had completely unraveled—usually due to the entire cap being removed by the cigar cutter—I replaced it and cut it for them, showing the precise location of the cut.) Of all the questions I received during my brief tenure as the local cigar expert, however, there was one that stood out more than the others:

“I’ve never smoked a cigar before, but it looks like something I want to try. What’s the best cigar for a first-timer?”

The answer, of course, is to start with a very mild cigar. Or a very small cigar. Or both.

I still remember getting a phone call at home from one of my business partners who was running the lounge in my absence. “There’s a woman here who says she knows you and you talked to her about smoking cigars for the first time,” he said. “She said you gave her a recommendation, but she can’t remember what it was.” I knew the woman, of course. She was an assistant manager at one of the local banks, and she was a fellow member of the Chamber of Commerce.

A few hours later, I stopped by the cigar lounge and asked my partner if she bought a cigar. I pointed to a box of Oliva Connecticut Reserve Toros, the one I recommended, and my partner shook his head. “She took one of those instead,” he told me, pointing to a nearby box of Oliva Serie V, perhaps the strongest and most potent stick I had in the lounge. Evidently he just looked for the word “Oliva” and grabbed the first stick he could find. So I grabbed one of the Connecticut Reserves, headed over to the bank where she worked, and sheepishly made the exchange. If she had tried to smoke the V, I would have never seen her again.

I’m not the biggest fan of mild cigars, but I do respect their importance in the mix. Yes, they are perfect recommendations for novices. In addition, plenty of people prefer a milder smoke and there’s nothing wrong with that. My prejudices against mild premium cigars seems to stem from the most popular version of such—the Connecticut wrapper. For those of you unfamiliar with cigars with shade-grown Connecticut wrappers, yes, they are actually grown in Connecticut, USA–and also parts of Ecuador. (There’s also a Pennsylvania Maduro wrapper that’s quite popular—but it’s much bolder than the Connecticut.) For many generations, cigars with Connecticut wrappers have been the go-to choice for people who just don’t want to smoke something powerful and overwhelming. But in explaining why I don’t love Connecticut cigars, I first have to talk about wrappers in general.

Some cigar aficionados believe that a wrapper is responsible for most of a cigar’s taste. I’ve heard people say that 90 to 95 percent of a cigar’s flavor is from the wrapper. I disagree—if that was the case you could use any crap tobacco as a binder and filler and it wouldn’t matter. But it obviously does. The magic of a great premium cigar is in the blending of tobaccos, of how the wrapper, binder and filler interact and enhance each other.

With Connecticut wrappers, however, that 90 to 95 percent figure sounds just about right. That’s because so many Connecticut cigars taste very similar to my palate. It’s not even that great of a flavor—it’s slightly metallic as if you put an old penny in your mouth before you fired up. Some of this taste may be caused by the higher amount of ammonia naturally found in these leaves. It’s quite difficult to find mild cigars, especially those with the CT wrapper, that break free of the mold and taste truly special. But I did find three mild cigars that I stocked in my cigar lounge because I personally approved of them and their high quality. Thanks to Cory Grover of Famous Smoke Shop, an online cigar website, I was able to try those very three again.

Cory contacted me after my column on online smoking vendors, wondering if I knew about Famous Smoke Shop. I rolled my eyes and slapped my forehead when I realized the omission. Famous Smoke Shop has an incredible selection, and I’ve used them many times in the past. In fact, FSS introduced me to the writing of Tommy “Zman” Zarzecki, a cigar blogger who is both politically incorrect and quite hilarious.

This is the exact cigar I recommended to my friend back in Texas. I like Oliva a lot, because they make great sticks for a very reasonable price. I’ve purchased big cigars from their “O” and “G” lines for under $5, and thought they were the bargain of the century. I’ve smoked the Oliva V Melanio figurado, which was the 2014 Cigar of the Year for Cigar Aficionado and costs the better part of $20, and it’s still an outstanding bargain. Oliva is also responsible for such outstanding lines as Nub, Cain and Flor de Oliva. (The Cain Daytona, by the way, is another cheap but tasty mild cigar that is a solid recommendation for novices.)

I really enjoy their Connecticut line for two reasons. First, this cigar is no wallflower. It’s earthy and cedary and leaves a slight tickle at the end of your tongue, thanks to the Cuban-seed Nicaraguan filler. Second, this is a nice robusto (5” by 50) cigar for a very reasonable price—just a tad over $6 from most online vendors. But you’ll love this cigar for the creamy, almost unctuous sensation it leaves on your palate.

One word of advice, however—this cigar likes to age in your humidor for at least a couple of weeks before it really relaxes and matures into a flawless smoke, which means that the second one was actually much nicer than the first because I didn’t rip it from the shipping box and immediately smoke it. That could be said for almost every cigar on the market, bold or mild, but in general I think Connecticut wrappers do become more complex and interesting when you let them settle for a comfortable stretch of time. The satisfying Oliva Connecticut Reserve Robusto is undoubtedly one of most complex mild cigars I’ve tried. 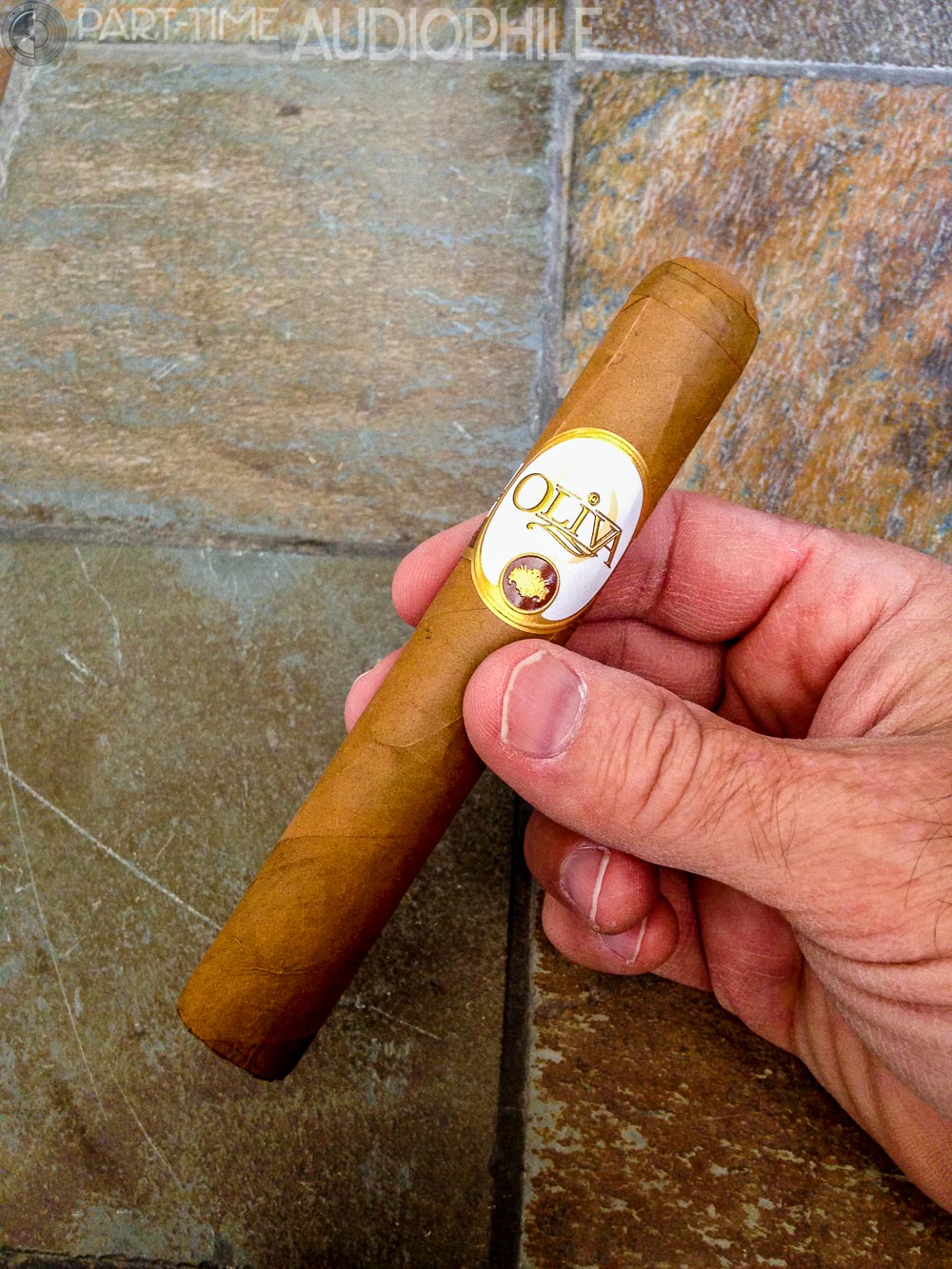 I’ve haven’t really talked about Rocky Patel yet in this column, which is not on purpose. Like Oliva, they are one of the fastest growing cigar brands in the world and in just a few short years that have more lines of stogies than I can count. Rocky Patel does market to the same sort of younger smoker as brands like Drew Estates and Asylum, but they back it up with superb tobaccos that have been aged and blended in a masterful way. While I can put on a blindfold and easily tell you which cigar is a Rocky Patel, that’s not because they’re flavoring or infusing their cigars in any way. Like most great cigar brands, they have a “house” flavor that is instantly recognizable and solely attributable to their use of some of the finest tobaccos in the world.

That’s why their Connecticut Reserve line is one of my favorites. Like the Oliva, this is a nice hefty toro that’s also affordable. (It’s closer to $8, but it’s 6.5” long with a 52 ring.) But this stogie is unusual for a Connecticut because the wrapper has been aged for seven years, making it very complex for a milder cigar. You’ll find a wealth of flavor profiles in the ’99, especially salty and buttery hints that will make you salivate a little more than usual.

I’ve had a few issues with some Rocky Patels in the past, where the triple cap seems to unravel no matter where you cut it. I’ve never had that issue with any of their Connecticut wrappers, however. The ’99 has a beautiful, flawless draw, and it burns evenly and slowly for close to a full hour. I’d be hard-pressed to choose between this and the Oliva—perhaps the Oliva is the better choice for the money, but the Rocky Patel Vintage Connecticut 1999 Toro is an almost opulent experience, a luxurious smoke that will satisfy you like no other mild cigar can. 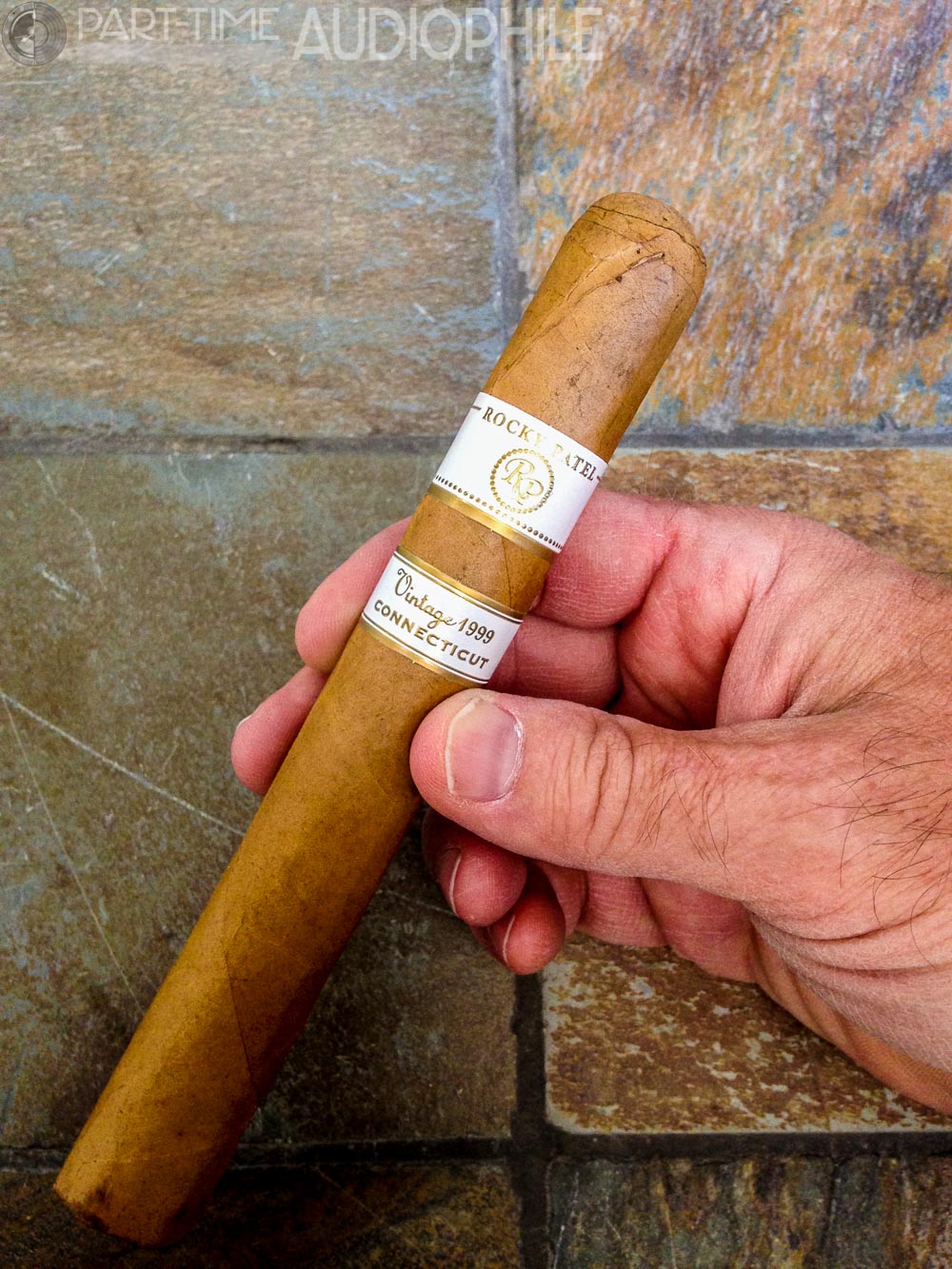 Here’s a chance to talk about a mild cigar that doesn’t have a Connecticut wrapper—the double claro. Double claros have a wrapper that’s a unique shade of green. That’s because the leaves used for double claros are immature and dried quickly, which provides an unusually mild flavor that serves as a gossamer foundation for the binder and filler tobaccos. Some double claros are so mild that they have little or no flavor at all—they taste like smoke instead of tobacco, which isn’t good. But I’ve also tried a number of double claros from brands such as Illusione and Arturo Fuente that are actually quite flavorful.

This 5 by 50 double claro, from La Flor Dominicana, is perhaps my favorite double claro of all time. The flavors from the Dominican fillers and Nicaraguan binders are distinctive enough to give this candela (a more formal term for the double claro wrapper) a sweet, slightly spicy profile that will remind you of a bolder cigar without the bite on the tip of the tongue. In addition, LFD features some of the most skilled torceadores in the industry, which means that every LFD I’ve lit up smokes evenly and smoothly without issues.

I smoked two of these gems in the same day—the first was so good I didn’t want it to end. I remember saying to myself during the second LFD that I could work this double claro into my regular rotation and it would be a welcome change—not as something to cleanse the palate between stronger sticks, but as a unique and worthwhile entry on its own. I could see myself buying an entire box of the endlessly intriguing La Flor Dominicana Double Claro No. 50. For a guy who likes bold cigars, that’s saying something.

Over the last few months I’ve been gravitating toward milder smokes—I’m not sure if it has something to do with the altitude here in Colorado, but big beefy cigars make me a little greener than they used to. Each of these three cigars provides everything I need: plenty of flavor and finesse without the need to shower twice afterward. So if you’re a cigar novice and you want that first-time recommendation, look no further. 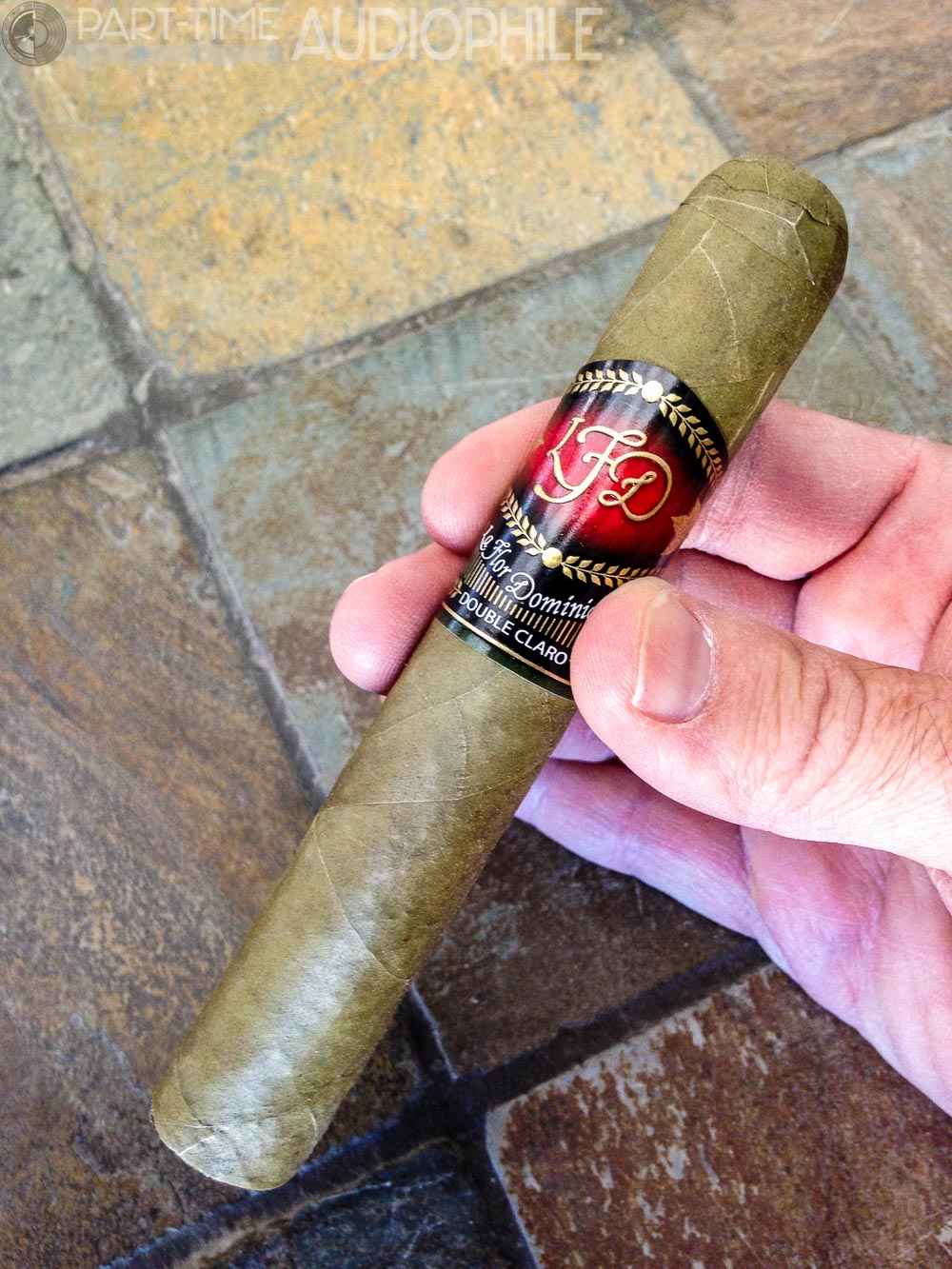 By Marc Phillips Since I started smoking premium cigars back in 1998, I’ve lived in several states: California, Washington, Texas, Colorado and now New York. That’s right, we just packed up and moved a […]

The Smoking Jacket: The Down Under Smoker

by Marc Phillips Have I told you about my trip to Australia this summer? That’s kind of an in-joke around here, since I can’t seem to shut up about it and I’m really starting to […]