Welcome to your completely unnecessary and wholly unsolicited Part-Time Audiophile guide to the holidays, Part 2 of a bazillion. You’re welcome.

Affordable vinyl is not impossible, but it is not a given either. You can find quite a few inexpensive turntables — from reputable vendors — that are boring and soft, or harsh and brash, or otherwise a let-down. Here’s a few to help you wander (back) into the wonders of vinyl. Well. Assuming you were dumb enough to leave in the first place. Tsk tsk. 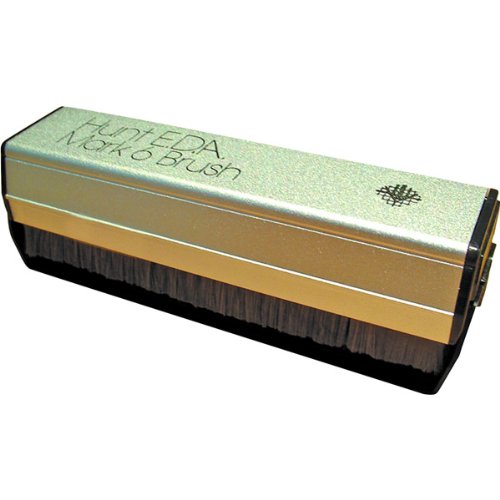 Got records? You need a brush. AudioQuest makes a damn fine $15 carbon-fiber record brush; I’ve used one for years. But this Hunt has carbon fiber sweeps and a felt brush between them, which may help to remove more gunk from the platter. Worth a shot.

Next stop, a record cleaner!

But this brush, or one like it, may help remove the random dust. Being a carbon fiber brush, there’s no issue of static build-up, but if there is static, this isn’t going to help much.

Which is where the Milty comes in.

I have no idea if this works. I do know that static sucks. Literally. As in, it pulls dust right out of the air and sticks it directly to the surface of every record I’ve ever dared to uncover in my basement lair.

I want to believe.

But I haven’t managed to test it yet. Still, looks neat. And “zapping” my records sounds like fun.

This should be something of a “duh!” for most folks, but the truth is that vinyl doesn’t stay pristine. In fact, the more you “enjoy” it, the worse “not-pristine” bit gets.

Which is why washing your records is fine idea.

Personally, I was dubious. More than a little, actually. And “record cleaners” seemed a wild extravagance — expensive, large and noisy. And then I found this little gem.

Now in its second iteration, this Spin-Clean set has all you need to clean up all but the biggest collections.

I don’t have one of these turntables, but I’ve seen them, and they seem solid and reasonably well-built.

The key to a good (vs crap) ‘table may have more to do with isolation and speed control than anything else, but these Music Hall ‘tables seem like a good place to start your trip down vinyl lane.

As Music Hall’s Roy Hall has explained, the reason your system sounds like crap is that you’re using crap components. Sounds legit to me.

U-Turn makes a $179 entry-level turntable, and that may be a great place to start.

But. I’m going to go nuts and venture than it’s the one with the upgrades that will be dramatically more satisfying.

Remember, the turntable is only part of it. But the ‘table with the upgraded cart is going to be the one that flips things over into awesome town.

This is the first budget turntable (in recent memory, at least) that Stereophile has blessed. At least partially. No, it’s not going to set a new plateau for vinyl performance, but again, we’re talking “entry-level”, or maybe, first table in a long time, or, that second table for my kid/spouse/office or whatever.

The strength of this table has to do with a good speed-control and reasonable build quality. But like most everything at this price level (for analog playback, that is), your money only goes just so far.

On the (big) plus side, you get a pretty good carbon-fiber tonearm and an Ortofon Red cartridge. These two things are huge at this price point, and may help you overlook the fact that the platter itself if felt-covered junk. At least it’s aluminum (and not MDF). Anyway. The sound of this turntable is surprisingly good.

I have the pre-DC motor version and I quite like it. The DC motor, apparently, provides even better speed stability.

The Schiit show continues, with the Mani blowing out the bottom-end of the budgetary barrel.

Many of the cheapest turntables include epically bad electronics — to save money, the better folks pull it all out and leave it all up to you. Or your AVR. “Bah!” says I. Get ye a Mani and be done with it!

One of these days, we’ll see the review of the Lounge Audio LCR Phono. Malachi Kenney promised. Until then, we have to imagine that this little box-of-wonder is as good as he says it is. And he does say it is.

With expletives. And explosive punctuation.

Prices have risen of late, what with all the hubbub, but if Mal’s right (and there’s no good reason to assume he isn’t), then this may do ya for quite a bit of your audio life. Lashed to a $300 turntable, this may seem like a bit of overkill, but I’m thinking that a phono preamplifier is not where spending is wasting. I say “go for it”.

For better or for worse, the bits are getting cheaper to find and manage. On the “good” side of the ledger — those bits are sounding better than ever. Not sure where “ubiquity” falls on that spectrum however. Ah, whatever. Getting “your” music in places you want them has never been easier.

I’ve been eyeballing these for a little while now, but have yet to take the plunge. A friend says you can do all manner of nonsense with them to get them to stream “real” services like Tidal, but out-of-the-box functionality is a little limited.

Think: Spotify, Pandora and those Google’s music services no one uses.

Controlled via App, this audio-only version of Chromecast is apparently dirt-simple to set up and use and the sound quality is better than most crap-tastic Bluetooth implementations (shudder).

At $35, this is stock-stuffer territory, so I’m getting one.

I’m putting the Roku Stick on here for a couple of reasons. One, it’s pretty awesome. I have mine plugged into the front “Aux” HDMI port on my Marantz AV receiver, and it works flawlessly.

Have you heard about The Man In The High Castle? On Amazon Prime. Fan-freakin-tastic show, based on a novel where the Nazis win WWII. No, really, it’s fantastic. Anyway, Amazon Prime Video is available on the Roku Stick, along with Rdio, Netflix, Vudu, Hulu, HBO Go and PBS.

I’m thinking I can do most of what I want my cable TV subscription for, right there.

I’m almost embarrassed at this point to have to recommend TIDAL HiFi as a streaming service. I’m truly hoping you’ve heard of it and have already signed up.

This is the Porsche 911 of streaming services. Just get it.

Like the Porsche, it’s a little rough to use when you compare it to a Toyota Camry. The interface is not as slick. But — put it on a winding road, and you see what all the fuss is about. The sound quality from Tidal is head-and-shoulders above what those other two can offer. Trust me on this — you won’t look back.

As to “why streaming” and not ripping, I don’t see this as an either/or. My TIDAL subscription puts an entire music store at my finger tips. It’s addicting. And searching (you’re going to need to use the Search function) through the catalog is appallingly time-consuming — there is just so much to listen to.

USB dingle-dangle-dongles are, arguably, the easiest way to get the sound from your laptop to be something other than hairy mush (yum!). There are a lot of these out there on the market, but one of the first remains one of the best. Best sounding, that is.

The AudioQuest DragonFly DAC is in its second iteration, and can handle files up to 24bits and 96kHz resolution, which is totally okay for laptop/travel/desktop-based audio.

The DragonFly might give up a little in terms of outright grunt for your flagship-type headphones, but for anything you’re likely to have with you out in the world, this DAC will be more than just fine.

And will sound the berries. Easy recommendation.

AudioEngine, not surprisingly perhaps, keeps cropping up in any “value centered” conversation in high-end audio, and the B1 Bluetooth Music Receiver is yet another in a long list of affordable audio bits worth taking a look at.

There are a few Bluetooth receivers on the market today, and also some that, like the B1, include the wide-bandwidth aptX codec. But this one from AudioEngine works. And works reasonably well. And doesn’t look like trash. Look, that matters.

Bluetooth has gotten a bad rap in hi-fi circles, and let’s be frank, it’s well deserved. Bluetooth isn’t going to overtake wired-audio quality, but the point here is that sometimes, wires are not going to work. So, in lieu of just giving up, AudioEngine has a nice solution that will work and work well. You can stream audio directly from whatever source you care to — and they even make a bridge device that can work with your non-Bluetooth sources. Slap one on a pair of their A5+ powered desktop speakers, and you’ve got a kick-ass little system you can drive with your phone.

I think this little widget from iFi may be their neatest yet.

The iDSD Nano is a tiny little box, and like its name suggests, it can play file formats of any size, shape or description.

There’s also a volume knob and headphone jack, for those looking for a very simple headphone-based system. The RCA outputs are for those of us pumping signal into some outboard something-something. It’s a luggable, not really meant for in-the-pocket-use, and will require a USB cable to get things off the ground.

Dr K had its big brother this past summer.

The LH Labs Geek Out Kickstarter campaign set records in high-end audio, and paired those up with some colossal time-to-market complaints. Some significant time has passed, and LH Labs has fully absorbed the processes required to deliver the goods. And deliver they have.

The newest Geek Out, a USB dingle-dangle-dongle DAC that plugs directly into your computer’s USB port (just like the AQ DragonFly), brings a host of offerings under a single, tidy, chassis. There are two power-levels, 100mW and 1w, so you can drive both a sensitive in-ear monitor or a power-hungry headphone. The old version had pre-set output levels, so this is very swish. Balanced outputs (via a TRRS mini plug) ride parallel to “regular” outputs (via a mini-jack), and the new GO can handle all current file types.

Sound quality on the old GO was pretty good for this form-factor — warm, detailed, and meaty. The new one takes that all up a notch.

BMC has been gracing these pages for the last couple of years as they introduce ever better products at ever lower price points — that’s a trend we can get behind.

There’s been quite a bit of noise made over at AudioStream around the potential benefits of “good USB” and the tools you can get to move that dial over. The king-of-the-hill was the UpTone Audio USB REGEN device, but Part-Timer John Grandberg thinks he might have found one that overtops it, the Pure USB1 from B.M.C.

Detailed notes are forthcoming, but John flagged this as one of his favorite finds for 2015. They’re a bit hard to find, but I do know that Moon Audio is carrying them.

dCS has a track record of continuing to invest in their products for years after they initially launch.  They have quoted statistics stating that they only use around 60-70% of the capacity of a device […]

Garth Powell, a lifelong audio engineer from AudioQuest keeps attendees on the edge of their seats as he discusses AC Power.  We always enjoy his wealth of experience and compelling demonstrations.   This time, AudioQuest was announcing the […]

Wow. What a show! Before anything else, a doff of the cap to the fine folks that put this paroxysm of audio joy together. Marjorie, what a way to celebrate 10 years! In case you […]