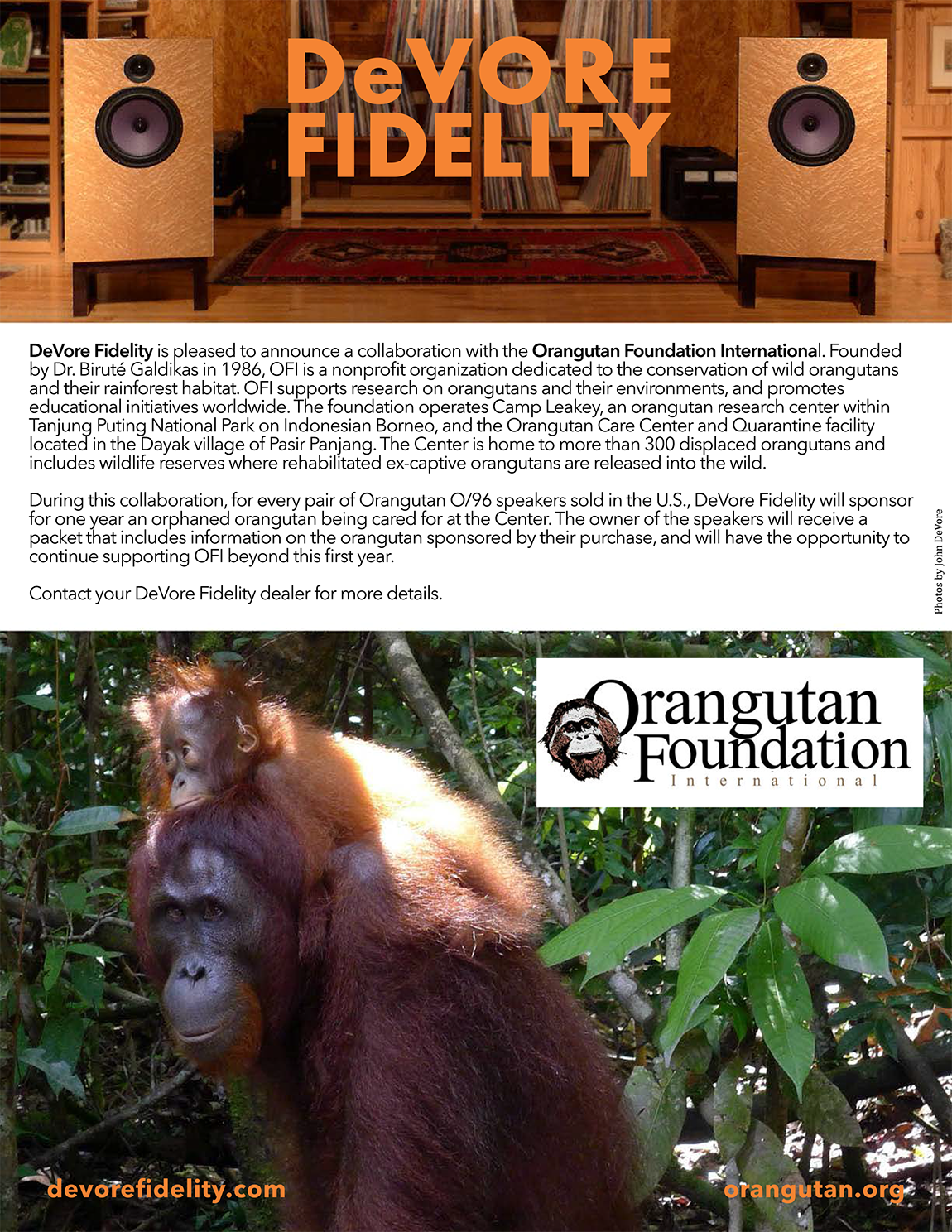 I had a chance to speak with John DeVore before Christmas regarding his new collaboration with the Orangutan Foundation International that will see DeVore Fidelity sponsor the care of an orphaned orangutan for one year at the Orangutan Care Center and Quarantine (OCCQ) Facility in Borneo for every pair of O/96 loudspeakers sold in the United States. DeVore’s family has a long history with primate research, and I asked him a little about how this collaboration came about.

PTA: What was the germination for the trip to the preserve in the first place? Where does your interest in orangutans originally stem from, and how did you initially connect with Dr. Biruté Galdikas? Did you go to Borneo with the express intent, in your mind, that you would come away with a plan to help them?

John DeVore: I have been interested in the natural world for as long as I can remember. This was due in large part to my uncle Irven who was a prominent anthropologist, primatologist, and all around polymath. He had been deep into most of the wildest places on Earth and his stories were exotic and exciting. It was his influence that had me thinking about apes when it was time to name my speakers.

Descriptions of his visit to Camp Leakey in the jungles of Borneo put a visit there high on my bucket list. I never thought I’d get there until my wife took a job with the travel arm of National Geographic, the only agency with access to Camp Leakey and in a very limited way, the OCCQ. On expeditions that don’t fill up, we can get astounding deals on standby cabins, and that’s how the trip to Borneo came about. I was excited to get to this near-mythical place, but had no plans for any sort of business collaboration.
Dr. Galdikas knew my uncle (she recognized the last name) and we had a fascinating discussion about the biases inherent in male vs female scientists (Irven was a pioneering researcher of gender and evolution and it’s effects on societal structures in primates [including human primates]).
But it wasn’t until I met the orphaned orangutans that I started thinking about ways I could contribute to the remarkable work being done at the OCCQ. A few discussions there, and numerous emails and phone conversations afterwards hashed out the details of a collaboration that really seems like it was meant to be. I’m very pleased that it’s going to happen.

The following are DeVore’s own words that he sent regarding the trip to Borneo, and the experience he, and his family had there that so deeply impacted him.

John DeVore: In 2015, my family and I had the extraordinary opportunity to visit two orangutan research facilities deep in the rainforests of Indonesian Borneo. Founded in 1971 by Dr. Biruté Galdikas and named after the legendary paleo-anthropologist Dr. Louis Leakey, Camp Leakey is the preeminent orangutan research facility in the world. Through her lifelong efforts, Dr. Galdikas has done for orangutan awareness what Jane Goodall has done for chimpanzees and Dian Fossey did for gorillas.

In 1998, Dr. Galdikas established the Orangutan Care Center and Quarantine facility to address the medical and rehabilitative needs of ex-captive orangutans. The OCCQ gives these orangutans the forest experience they will need when they are eventually released into the wild. Many of the 300 orangutans living at this facility were originally captured by illegal poachers who killed the orangutan mothers and then sold the orphans as pets or to unscrupulous zoos. These rescued animals are in need of extensive medical and emotional attention, which is lovingly provided by the staff. The caretakers form deep bonds with their orangutan charges in order to help them successfully reintegrate into social groups, a necessary part of re-acclimating to the wild.
Upon our arrival at the Orangutan Care Center and Quarantine facility, we donned surgical masks to protect the orangutans from germs we carry. These apes are so genetically close to us that they are susceptible to many of the same diseases we are, and in their compromised condition this could be quite dangerous. But nothing could prepare me for actually meeting and interacting with these young orangutans. Gentle and curious, one took my hand and led me to some of her friends. Another playful six-year-old tried a number of times to make off with my hat and settled for hanging just over my shoulder and playing with it in place. In this jungle-gym area of the facility reserved for the youngest orphans, I was reminded of a human nursery school, so similar were the infants.
I urge anyone interested in learning more to visit orangutan.org.
Dr. Galdikas and her staff are doing a great deal of good, but they need our help. Not only do they need contributions for the Care Center and the Leakey Research Facility, they are also spearheading the fight against the wholesale destruction of the last wild orangutan habitats by palm oil producers. These multinational corporations set huge fires to clear away the indigenous forests for palm oil plantations, destroying many of the last places on earth where orangutans live in the wild.
With this program I hope not only to raise much-needed funds for Orangutan Foundation International, but also to raise awareness of the plight of orangutans, and of the incredible diversity of wild creatures on our planet.

You are alone. Night is coming, quickly, like a wave leading the tide; it’s rolling forward now, from a horizon hidden by the line of trees. There are sounds. Dusk sounds. The rising chorus of […]

Best Room Picking Tone Imports as my top choice for Best Room in Denver for me was easy because it was run by two people whose ears I implicitly trust, whose taste runs parallel to […]