I spend too much time on Facebook, that’s obvious even to me.

One day, mixed in with all of the cat videos, was a link to a Slate  article, “This Is The Greatest Hoodie Ever Made“. If found it more than a little surreal. I mean, this was Slate (here’s another from Business Insider). Spending several thousand words on a hooded sweatshirt. Umm. WTF? Sure, there are those of you with natural filters that probably see stuff like this and blip right by. I probably would have too, if it hadn’t been Slate. I mean, they have a rep for being somewhat serious. Long story short — I clicked through.

The article goes to reasonable effort to tackle their subject, and does so at some length. My puzzlement gave way to genuine curiosity pretty much right away. Apparently, this hoodie is a thing. From an American company — and its entirely made in the USA. And it doesn’t suck. Okay, Slate, you have my attention. Proceed ….

The company, American Giant, is based in San Francisco. Their goal, other than the whole we’re-making-clothes-in-the-USA thing, has to do with quality. For example, when was the last time you wondered if your sweatshirt would last 50 years? I’ll go first — never. It’s really never crossed my mind. Not that I don’t think it’s possible, I guess I’ve been trained to not really think of clothes as long-term investments. They shrink. They wear out. You go get some new ones.

Thinking about that jungle that’s my closet, I can point to half-a-dozen items that date back twenty or more years. Stuff that significantly pre-dates my relationship with my wife, for example. There might (or might not) still be a couple of shirts in there from 30 or so years ago, too, but I won’t swear to it. Such items are probably still in there more because I’m lousy at cleaning things out than that they’re currently in rotation, but whatever.

A couple of hours worth of dusty nostalgia later confirmed two things — yes, I had too many clothes and yes many of them are now vintage. Heh. Whoops. I guess I’ve been distracted. But, thinking about it, the idea of a 50 year old sweatshirt really wasn’t all that weird. At my current rate, I’ll shortly have quite a few things that old. Be interesting if some of them were that old and still in use and not just in storage.

The hoodie that Slate was talking about is $89. That’s I think that’s a crazy-lot (but it’s not anywhere close to the most expensive hoodie you can buy) for what was essentially a piece of casual-wear, especially one that I really wouldn’t wear often. I recalled that this was about as expensive as a new shirt from Banana Republic; I used to get a lot of clothes from them when I was young and interesting. Off the bargain rack, to be sure, but whatever. Clothes can be expensive — got it. But Banana Republic clothes tend to be nicer — better materials, better construction, better fit, blah blah blah. Better. That’s the expectation. American Giant seems to be pricing themselves into that market, but would they hit the mark?

The description was quite promising. “Extra heavy weight material” is not something I’ve seen as a selling point, but the American Giant stuff makes quite a bit of hay about it. There’s a stretchy side panel for “mobility” (raising your arms does not mean exposing your lint-filled belly button), extra-heavy stitching, selected reinforcement, and the whole thing is supposedly fitted to not look like a hot mess while being worn. A thoughtful, carefully constructed, highly durable … sweatshirt.

Anyway, perhaps it was the spelunking in my closet (and the fact that this was a furiously cold winter), but I figured I’d check it out. I ordered myself an $89 “mock” hoodie, or “un-hoodie” — I think hoodies are dumb — and prepared myself to be underwhelmed.

Yeah, yeah. I know. What happened to the “Part-Time Audio-phile” — I get it. But whatevs. Don’t you ever do something just-because? Feel free to chalk this excursion up to the “Part-Time” part. 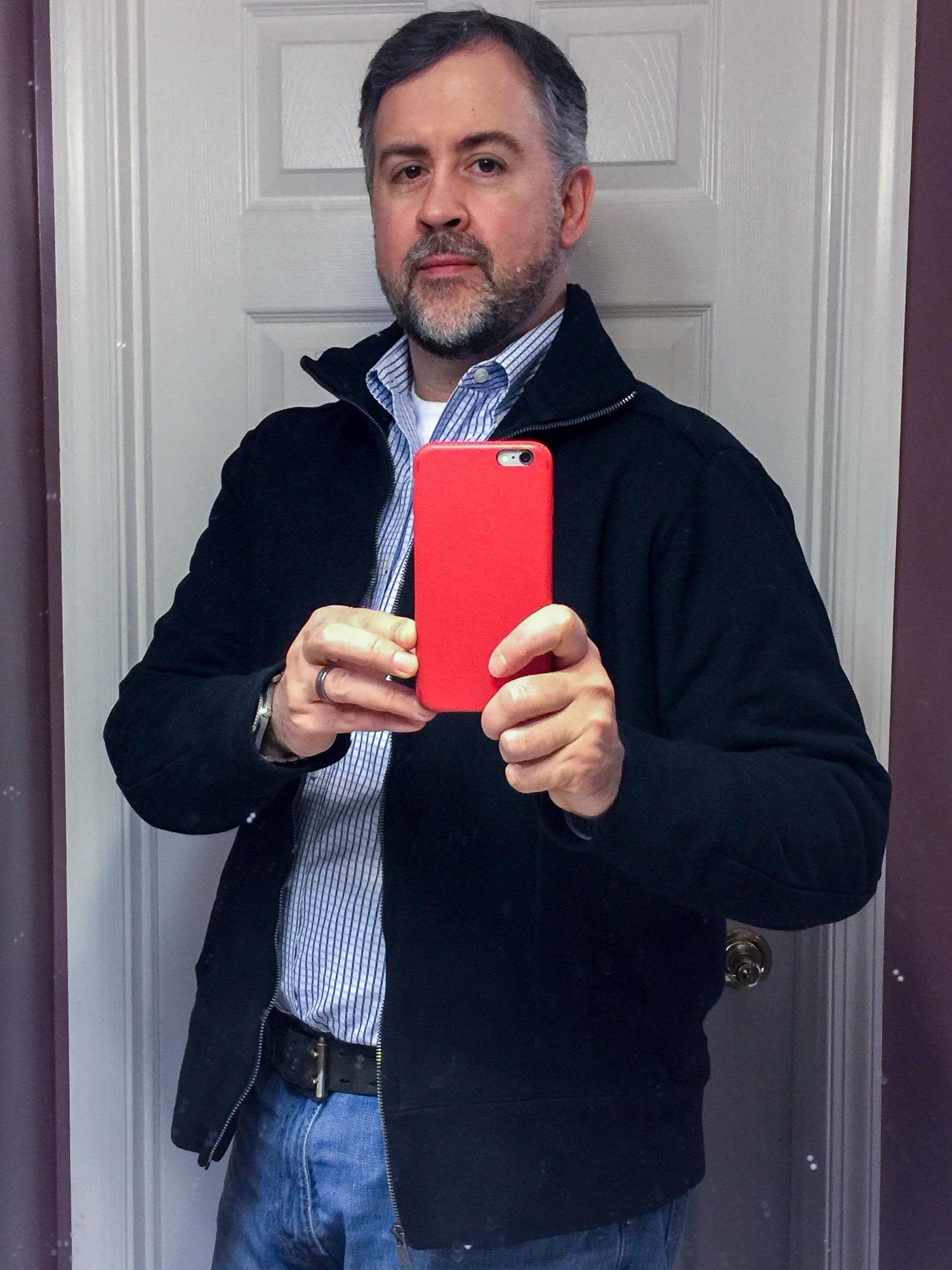 Anyway, I got me one.

First thing: the description doesn’t really do the fabric justice. It’s easily the most robust sweatshirt material I’ve ever heard of, much less felt. It’s all-cotton, so there’s no issues with static or feel-under-the-hand. It’ll probably shrink, too, so have a care.

The fit is “slim”; I ordered an XL because I’m … ah … generously proportioned. That usually means perfect for the shoulders and arms, a little loose in the chest and a lot loose in the waist — but here, it was snug around my not-so-girlish waist. Snug, but not unworkable. The effect was seriously slimming, actually.

Check me out. I’m a sexy beast! In a sweatshirt!

The finish, workmanship, whatever you want to call it, is outstanding. Stitching is tough. Reinforcement is everywhere. The only thing that’s gonna take this thing apart is carelessness.

Since my un-hoodie is at least related to a hoodie, there’s a zipper. That zipper is both a highlight and the biggest drawback, in my case, but main because it’s beefy. Think “mega-zipper”. If zippers can come in quality levels from “shitty” to “prison bars”, this sits squarely on the latter. 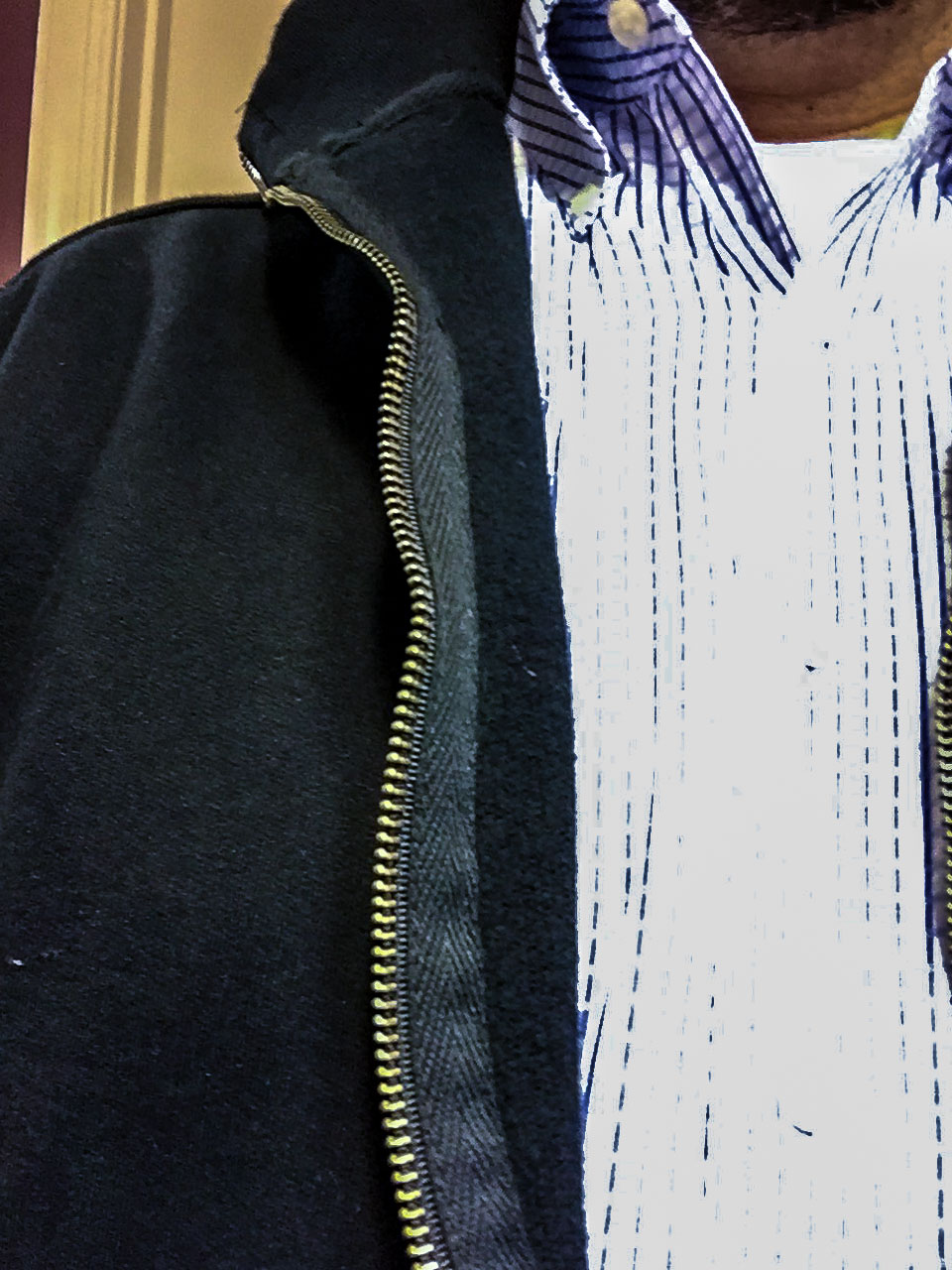 I’ve never had a zipper like this in something casual. That is, something not a winter jacket associated with anticipation of something best described as “arctic”. The problem? It’s too robust — that is, it cannot and will not lay flat.

Complicating things, I’ve got a bit more going on in the waistline than is strictly acceptable in California, and that means that my XL sizing (which is absolutely correct for American Giant) requires absolutely no contours to pull off the illusion of a flat tummy. You skinny turds should be just fine.

The sizing, however, is meant to be snug — don’t over-size or you’ll just look sloppy. Tsk tsk.

About that winter thing.

As winter starts pulling its teeth out of my neck, the heating in my house gets a bit wonky. The thermostat, being upstairs, tends to cut out before the cold seeping into the basement really ebbs — which means there’s about a 4 week period before the ground really thaws where I freeze my ass off in the basement. The temperature differential is something like 10 degrees — I start off all toasty as I descend into my lair in the morning after hustling the kids off to school; by lunch time, my fingers are blue and I’m shivering. 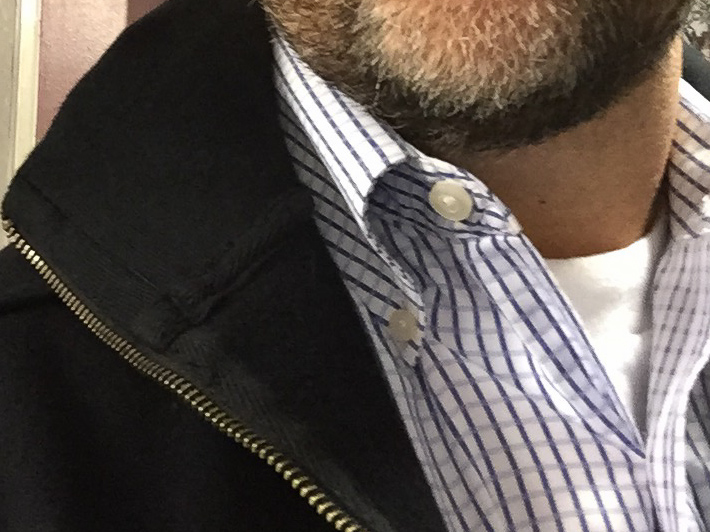 Where the f*** is that sweatshirt?

Wearing it is where I made the shift from admiration to love.

Because it’s extremely comfortable. All that thick fabric, nestled all close and comfy, means warmth and I wanted that. Two, it really is slimming. Mine is black, and I kept forgetting to take it off. Wearing it to work, with friends, the styling and unslouchability of the un-hoodie meant that it was pretty much invisible for all but the more formal stuff. I was asked if I’d lost some weight. I love it when that happens. Clearly, I need to manage that exercise/diet thing a bit better. Still, that was nice.

The cuffs are what’s sold me on this, which seems weird to say but wonderful to wear — they’re really deep and thick. They’re a little stretchy, but they’re twice the size of my corporate-logo’d fleeces. Shouldn’t matter, but it does — again, it goes to that sleek, fitted look, and also feels scrumptious, and that’s a really weird word to use about a sweatshirt.

More: I’ll be getting more stuff from American Giant.