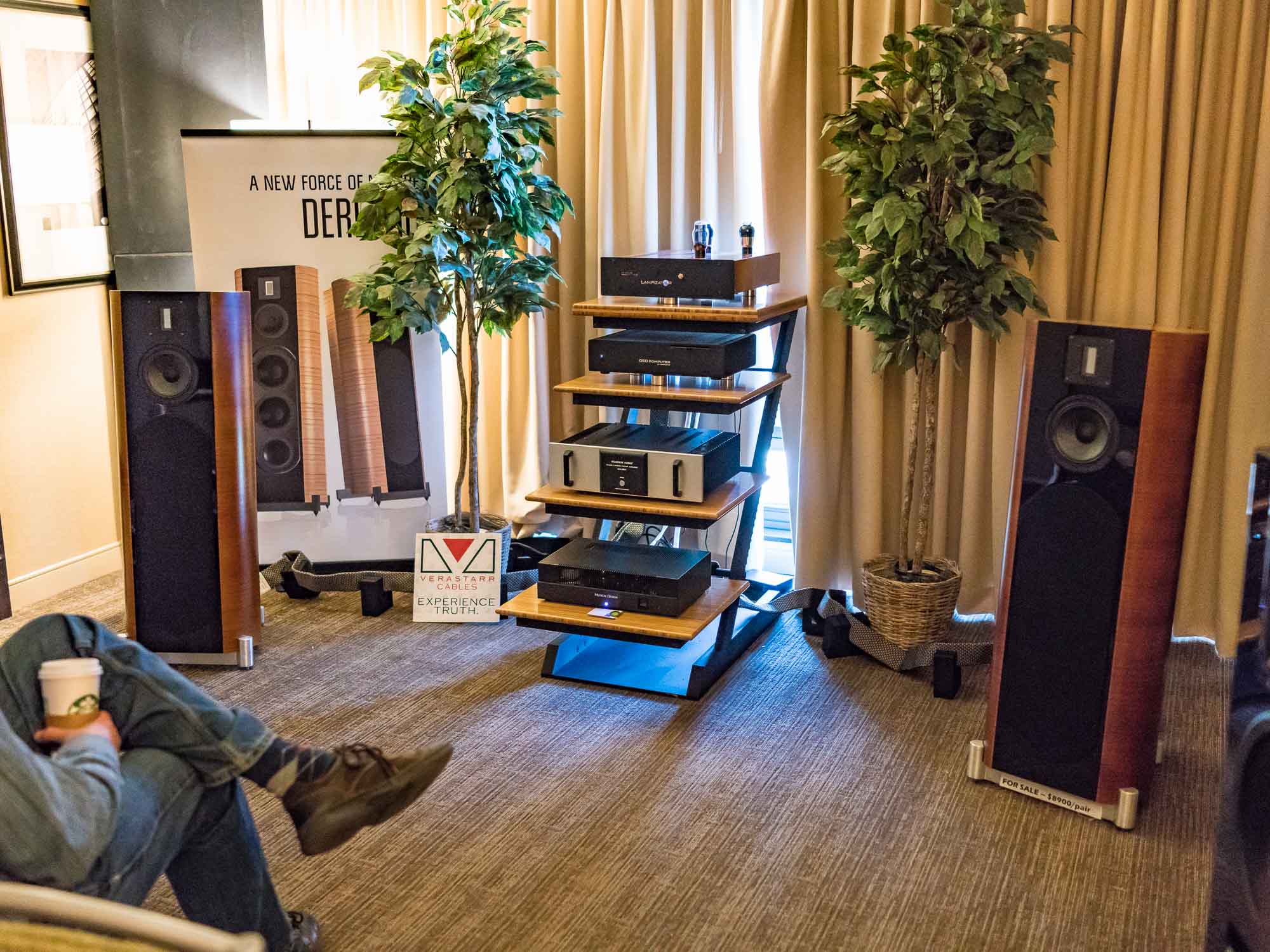 This room at AXPONA changed that for me.

The Derecho loudspeakers, driven by a variety of amps, and fronted by the magnificent Golden Gate DAC from LampizatOr, made some truly engaging and altogether lovely sound. I was impressed.

The Derecho are $10k/pair, 6Ω nominal, and 93dB sensitive, with a low-bass reach down in the low-40Hz region. Two 8″ woofers and a massive front-facing port sit behind the grill covers in the photos; these are paired with a carbon-fiber mid and a RAAL tweeter. They’re bigger than they look — each one is over 100lbs.

These may well be the best Vapor I’ve heard.* 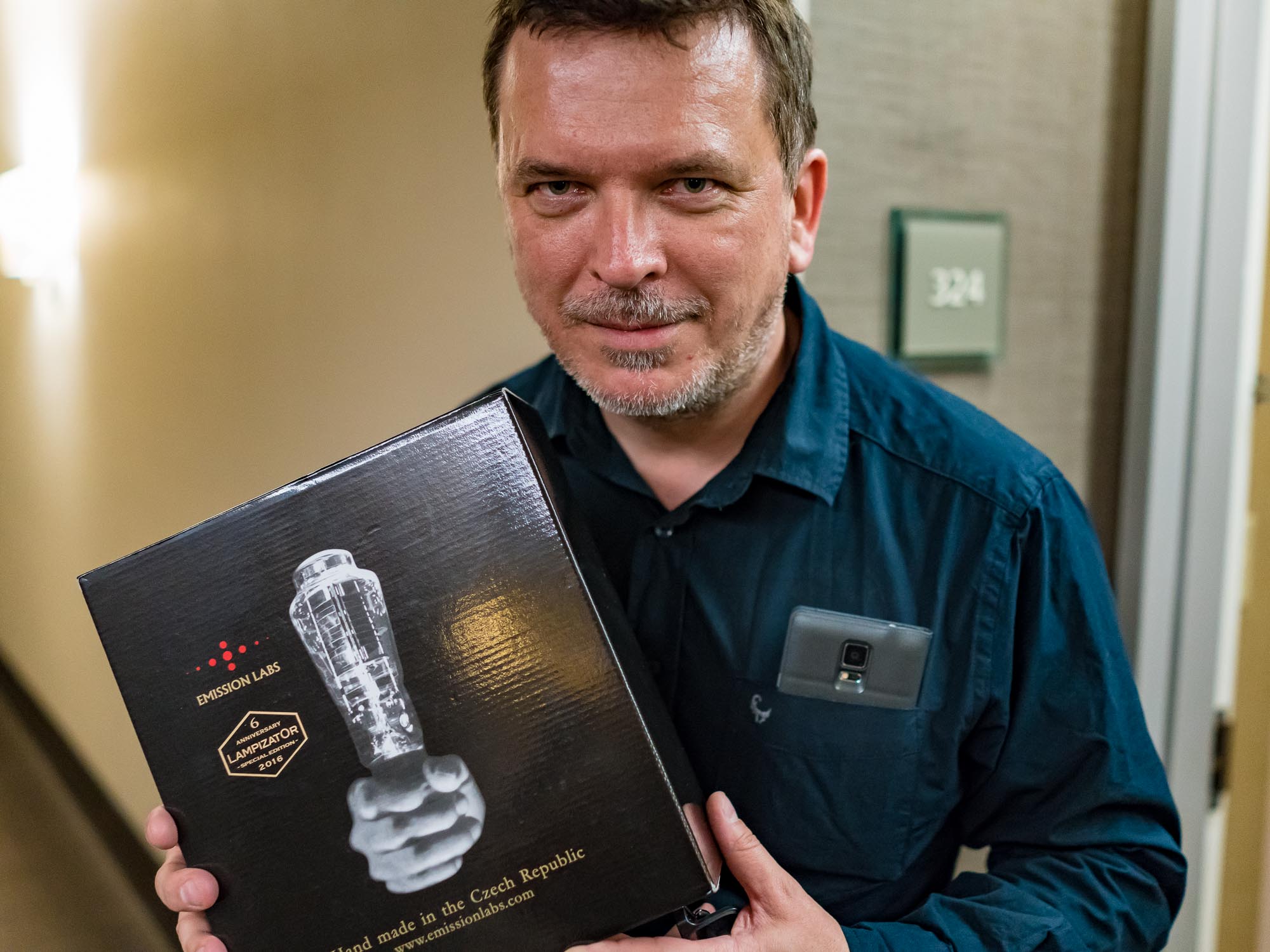 I saw Lukasz briefly in the hallway outside the room, carrying an unusual box of EML tubes around. And by unusual, I mean, custom. With his own badging on the box.

Wait, what? Yes! Apparently, Mr Lampizator talked the EML folks into making him a version of a 45 tube with mesh plate and a round “globe” top. Most are pinched. This is done to hold the plate — but also tends to be microphonic. In the Lampi Edition, there’s nothing to hold the plate, which makes them more delicate, but also removes the microphonics. Ta-da. Secret sauce, people. That’s what that is. Pure, delicious, secret sauce. Unfortunately, Lukasz is also sold out … and EML has no plans to make this tube as part of a regular thing. Insert the wailing and gnashing of teeth. Got questions? Send LampizatOr a note.

The Golden Gate DAC starts at €13k, and is their top-of-the-line. Options include balanced topology and/or a volume control. It’s also really big. It converts DSD natively — that is, with no ΔΣ converters in-line — and also does PCM decoding along a separate path. This DSD path has been the single most compelling reason to buy a computer that does the on-the-fly conversion from PCM — it’s stunning.

I’m talking with Lukasz again, to see if I can get my hands on a new LampizatOr. Stay tuned.

*EDIT/UPDATE: We just received a note about the death of Heather Scott, the wife of Vapor Audio’s Ryan Scott. This is the worst kind of news to hear, much less live; we offer up our deepest condolences. We wish them peace, courage to face the days ahead, hope that they may find some comfort, and loving memories to forever hold in their hearts. Please keep them all in your thoughts. You can find more, and offer your own words, over at Audio Circle.

ModWright, Daedalus, and WyWires have become something close to the Three Stooges over the last few years. They keep hanging out with each other, they keep showing minor variations on a theme, and they keep […]

Biggest surprise at AXPONA? Soundfield Audio! Being the total tool that I am, I completely missed their debut at the Capital Audiofest last summer. Since then, I’ve been lambasted, ridiculed, mocked and pitied by all […]

It may be the worst kept secret that Leland Leard and Roy Hall of Music Hall Audio serve up the “good stuff” at audio shows. They have these tiny plastic medicine cups that they’ll measure […]