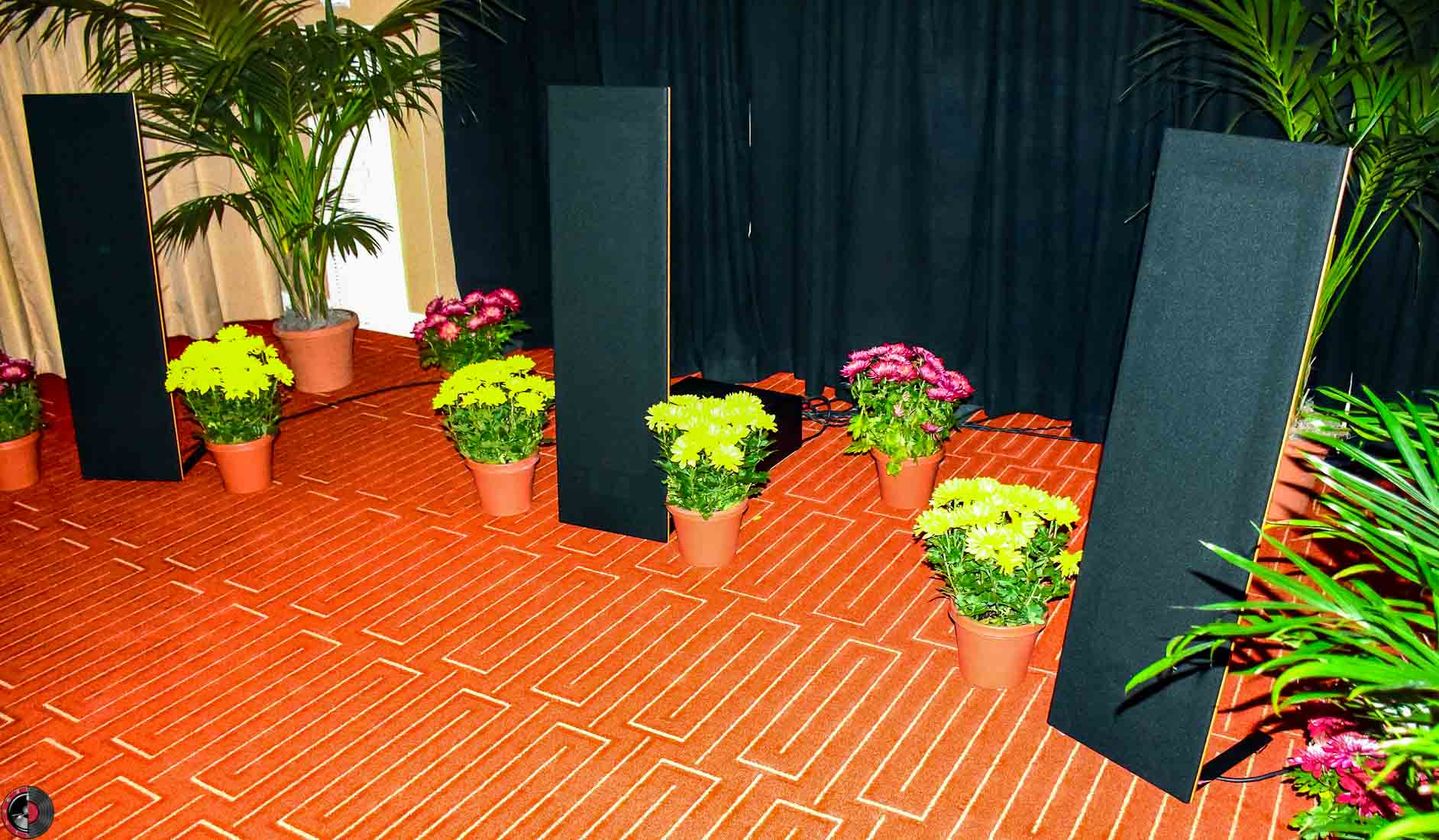 Many audio system demos take place in dimly-lit rooms. I think sales reps feel this adds some mystique to the gear being auditioned, and maybe allows the listener to better focus on the sound and create his or her own aural illusion.

Often, there are just a few accent lights on the speakers and the glow from various controls and meters on the electronics. But, in all the auditions I’ve ever been to — and that’s a very big number after four decades in this hobby — I don’t think I’ve ever experienced a playback in a store or at a show that took place in complete darkness. Not just dimmed-to-minimum, or door-cracked-open, but actual I-can’t-see-my-hand-in-front-of-my-freaking-face blackness. Yet, that’s exactly what I encountered at T.H.E. Show in Newport.

I knew something was up as I approached the Magnepan/Hi 5 Stereo room. There was a large paper clock with moveable hands taped to the door, with a sign reading “Next Demo.” A Maggie rep was standing just outside, trying to get people to line up in a semi-orderly fashion down the tight and busy hallway.

So, I joined the crowd and 10 minutes later, after a dozen people filed past, we were taken in. Magnepan had a large one-room suite that had a slight L-shape. There were three rows of chairs just in front of us, and I could see speakers on the right-hand wall. The electronics, though, were almost out of site on the side of the seating area.

With only the light coming through the open door, we found our seats. I looked at the setup and was surprised to see three Magnepan MMG panel speakers ($300 each) set up in front of us. The left and right speakers were fairly far apart and the third full-size, matching speaker was dead center.

Driving them was a Bryston/Magnepan-modified processor ($9,800), used to generate the center fill signal, along with a Bryston 6B SST three-channel amplifier ($8,895.00). There was some other support equipment as well, but it was too dim for me to make out what it was.

After a few words from Magnepan’s Wendell Diller, the door shut and we were plunged into darkness. I think I may have kicked the foot of the person next to me, but at least I concentrated on keeping my elbows tucked in. Then, the audio started playing.

The first track was an “environmental” recording that featured various beach sounds, appropriate for Newport. That was followed by some acoustic instrumental pieces, a few percussion-heavy segments and a classical excerpt.

The sound — remember this was on speakers totaling $900 — was startling. The panels offered fine resolution, excellent detail and remarkable speed. The center channel, meanwhile, added a subtle extra dimension to the sound that perceptibly widened and deepened the soundstage. The 3-D effect was especially superior to most home theater rigs, which usually put too much information in the rear. The Magnepan/Bryston system, instead, was almost holographic. The sound was presented very naturally, with group performances emerging as a cohesive whole.

The resolution of the Maggies also was impressive. In fact, I think you’d be hard-pressed to find a better speaker for $600 a stereo pair. This panel not only punches above its weight, it barges in the ring with the big boys and stays on its feet through the final round.

“We’re not trying to convert anyone from two channel,” Diller told me in the hallway after the demo, as my pupils returned to normal size. “We’re having some fun. We want to attract people and let them hear our speakers.”

Magnepan, in fact, has conducted something like this at past shows, but then it hid the center channel behind a curtain. Still, in stealth mode or not, the three-channel system sounded great — and is something you really could do at home, lights on or off. (I’ll take a moment here to apologize for my photos, as the exhibitors had removed all lighting from the room, so I made do when the door opened.)

Three-speaker systems actually date back to the early days of hi-fi. Bell Labs did some research on the concept, but the growing popularity of the phonograph — with two sides to a stereo groove — spelled the end of center fills for the most part.

Diller said retailer Hi 5 Stereo planned to show the three-channel setup at its La Habre, Calif., store. Who knows, this could turn into a thing. So check it out. Just don’t get left in the dark.

Anthony Gallo Acoustics Gallo was showing off their Strada 2 speakers ($999 each) and TR-3D subwoofer ($985 each) in the Atrium. It’s hard to believe how good these things sound at reasonable volumes. When we […]

Ever look across the room at your rack full of gear and mess of cables and think, “Man, there’s gotta be an easier way”? I have a feeling someone at Grimm Audio was thinking the […]

Whoa. That’s kinda how I feel whenever I run across speakers from Rockport Technologies. I dunno why. I think the first model I ever heard of was the Arrakis, and that speaker may have scarred […]