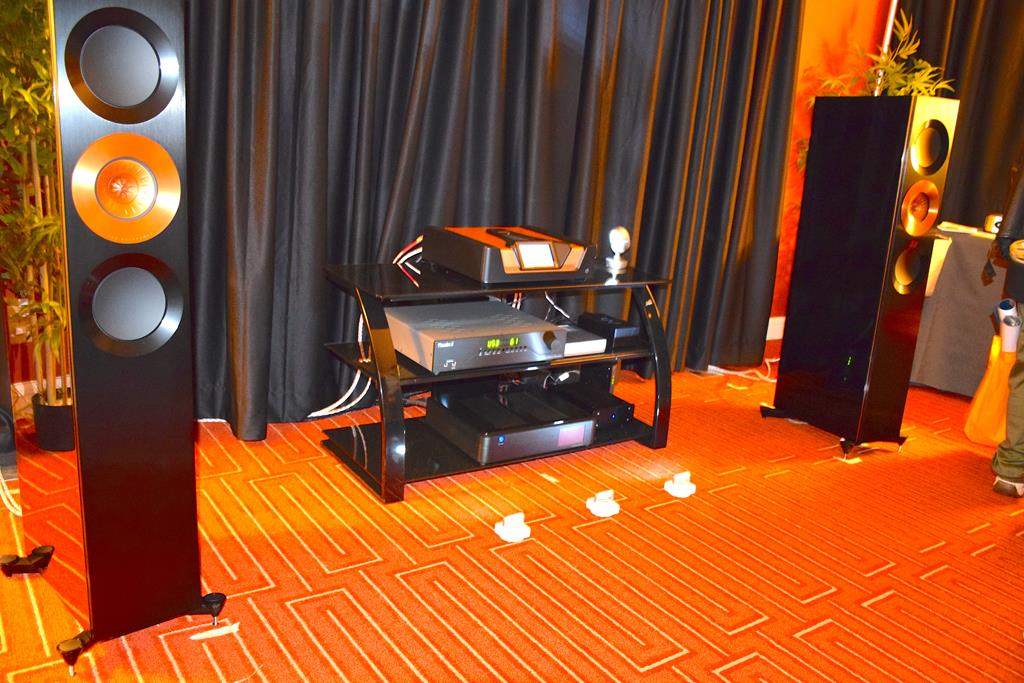 You can tell when a high-end company begins to reach a certain buzz level in the industry: it usually starts showing up in multiple rooms at shows, both highlighting its own gear and being chosen to support others who also want to sound their best.

That’s the sweet spot currently being enjoyed by Atascadero, California-based Wyred 4 Sound and its affiliated brand, Spread Spectrum Technologies (SST). The two teamed up to show their stuff in several rooms at T.H.E. Show in Newport.

Wyred 4 Sound was founded in 2007 when E.J. Sarmento left Cullen Circuits to go out on his own. Aided by a few friends, he soon had his first product, the 200s amplifier. Shortly after that followed a host of other components, which became known for their innovation, compact size and reasonable cost/quality ratio. Sarmento also became friends with Spread Spectrum founder James Bongiorno and acquired SST in 2015.

Wyred 4 Sound had its primary Newport exhibit in Room 211, where it was displaying two new products — the Statement amplifier ($5,000) and a Rune-ready music server (price TBD). They were connected to an SST Thoebe II preamp with optional DAC and phone stage ($4,250 as equipped) and a pair of KEF Reference 3 Foundry Edition speakers ($14,000 a pair).

A track by Bill Frisell (bless Wyred 4 Sound for playing this idiosynchratic instrumental genius, rather than some done-to-death audio spectacular) showed the new 750-watt-per-side amp to have a winning combination of fluidity, impact and effortlessness. Bass was tight, but tuneful, cymbals sparkled and Frisell’s multitude of unique guitar tones were a thing of awe.

It seemed appropriate that Wyred 4 Sound was such a good match for the jazz legend, as I believe Frisell’s brain must be wired differently than anyone else’s. (He too-modestly attributes his stunning aural palate to practice.) 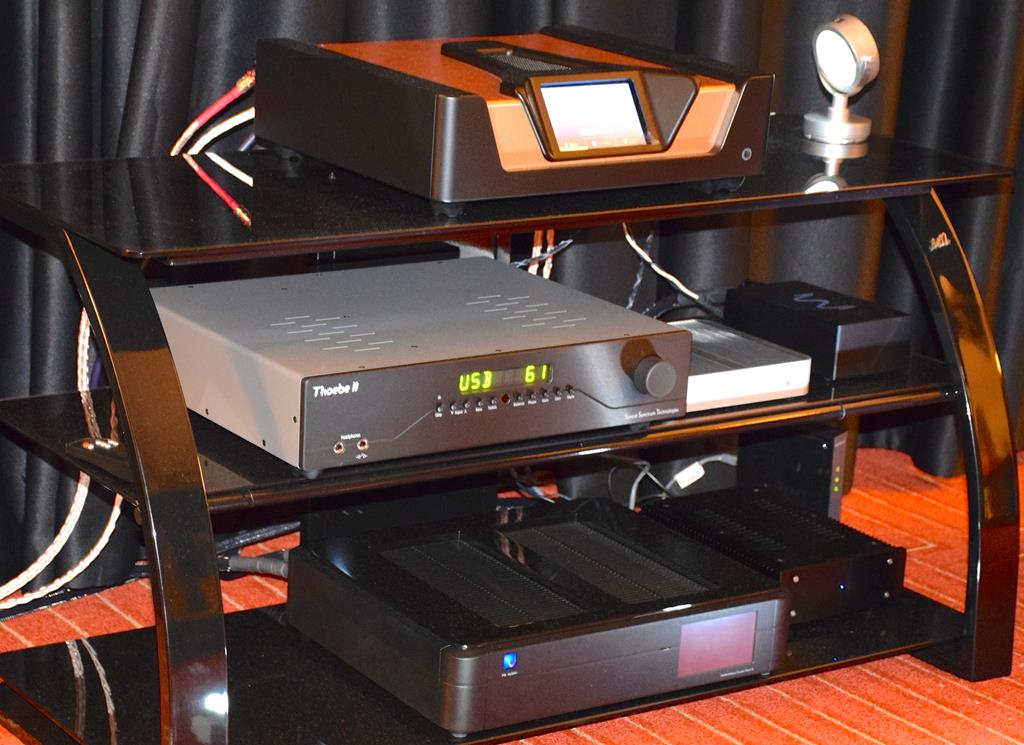 R&D likely takes up a lot of staff time at Wyred 4 Sound, since the company maintains a steady stream of product releases. According to Wyred marketing director Tony Holt, the Class D Statement amp took four years to develop. A matching preamp is on the drawing board, he said.

Meanwhile, Wyred 4 Sound has a number of other intriguing units such as the jitter-busting Remedy ($399), a cute box about the size of a pack of dental floss that cleans out the nasty stuff in your digital stream before it gets to your DAC, and the similarly sized bLink Bluetooth streamer ($499) that beams tunes, corrects errant 1s and 0s and fights timing errors. 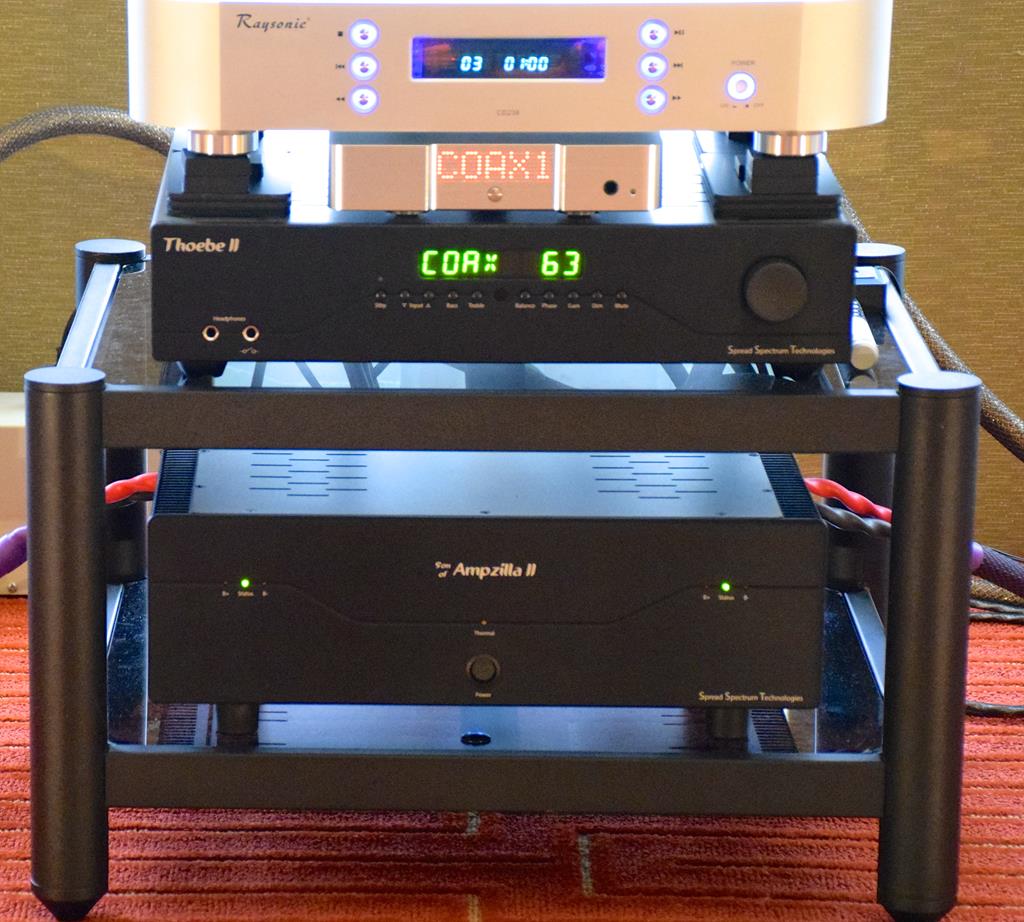 SST also was busy. Along with helping Wyred 4 Sound’s Statement sound good, SST’s room with Acoustic Zen’s Crescendo speakers ($22,000) and its own Son of Ampzilla II amplifier ($3,500), was putting to shame many rigs costing three or four times as much. A cover of the blues classic “St. James Infirmary” by the cello-and-bass duo of Bethany & Rufus, for example, was stunning on that system.

And, one floor upstairs, SST’s fully balanced Ampzilla 2000 Second Edition monoblocks ($9,0000 a pair) and the Thoebe II were driving the Pure Audio Project Stellar 12 open-baffle speakers ($20,000 a pair), which were in their North American debut.

No matter where Wyred 4 Sound or SST showed up, there seemed to be good music radiating out the door. I predict both will continue their several-places-at-once act at future shows.

CHICAGO (PTA) — KEF teamed up with Hegel and Straightwire to present an almost Broadway musical like showcase of KEF’s most advanced products. From the new LSX and R-Series products, on up to the statement […]

In what can only be described an act of outright belligerence, KEF and VPI teamed up at this year’s Capital Audiofest and decided to stop being nice about it. Or fair. In fact, as one show-goer […]

By Dr. Panagiotis Karavitis KEF silently launched the Blade TWO during Munich 2014. Silently because the beautiful blue Blades were on static display next to the even more exotic Muon. Inside KEF’s booth one and a […]