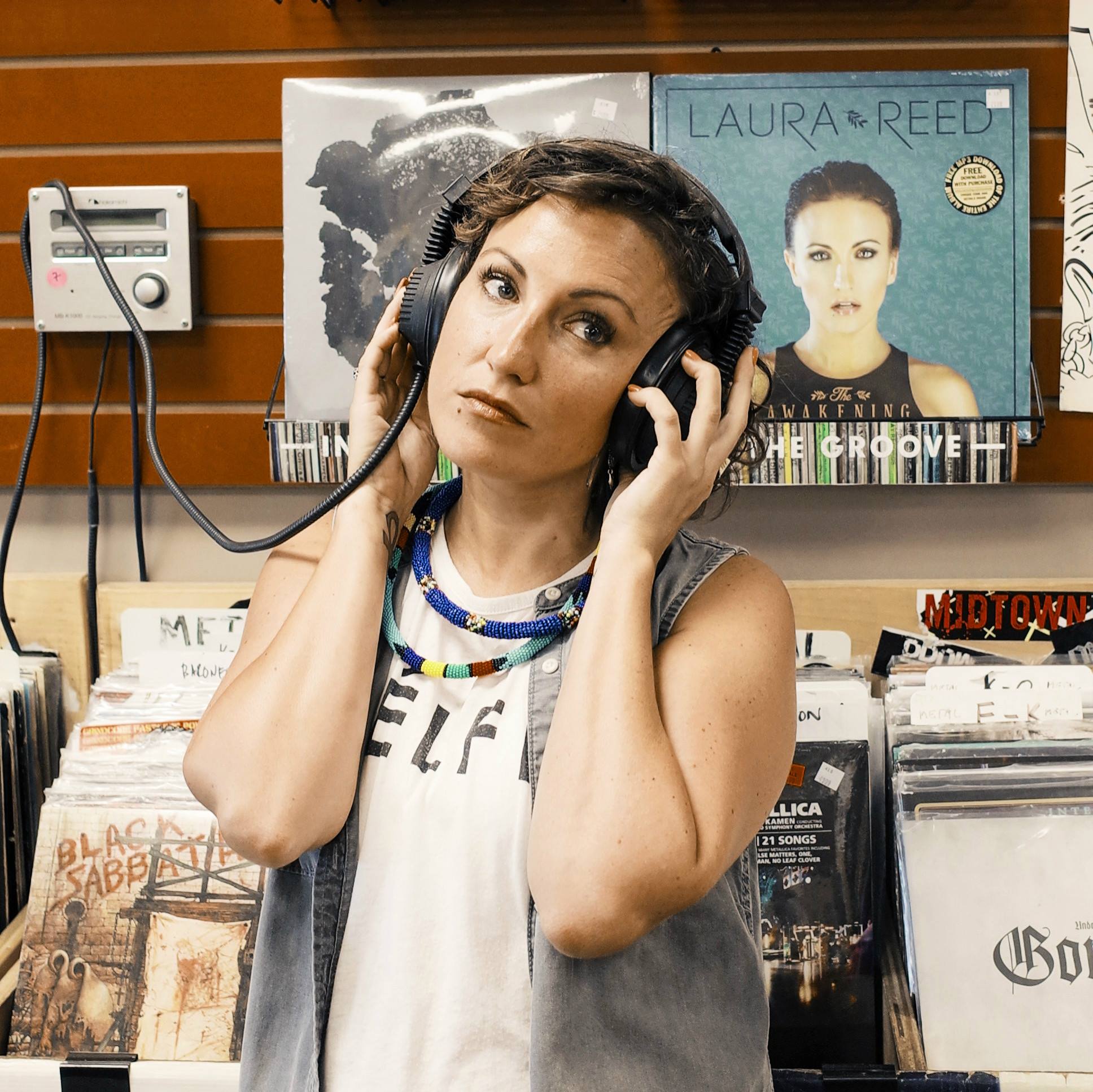 The idea that vinyl is post peak, dying, or having jumped the shark is as my friend Stephen Judge would say “complete bollocks!”

Stephen Judge, a native of England and owner of Schoolkids Records in Raleigh, NC recently wrote a long and passionate article about the vinyl industry, if you are into that sort of thing you should definitely get your fill by reading his article in Blurt, titled “NEVERMIND THE BOLLOCKS, HERE’S THE VINYL RECORD INDUSTRY.”

It’s a masterpiece rant if I’ve ever read one.

My reason for mentioning Stephen and Schoolkids Records is that his store is the backdrop of my current interview location with South African-born and North Carolina-based singer/songwriter, and multi-instrumentalist, Laura Reed. If you are into ‘indie neo­soul’ artists who’ve attended the school of the powerful political voices, like that of Nina Simone, and even more recently in style and rhythmic-flare to that of the late Amy Winehouse, then Laura Reed is probably already on your musical radar screen. 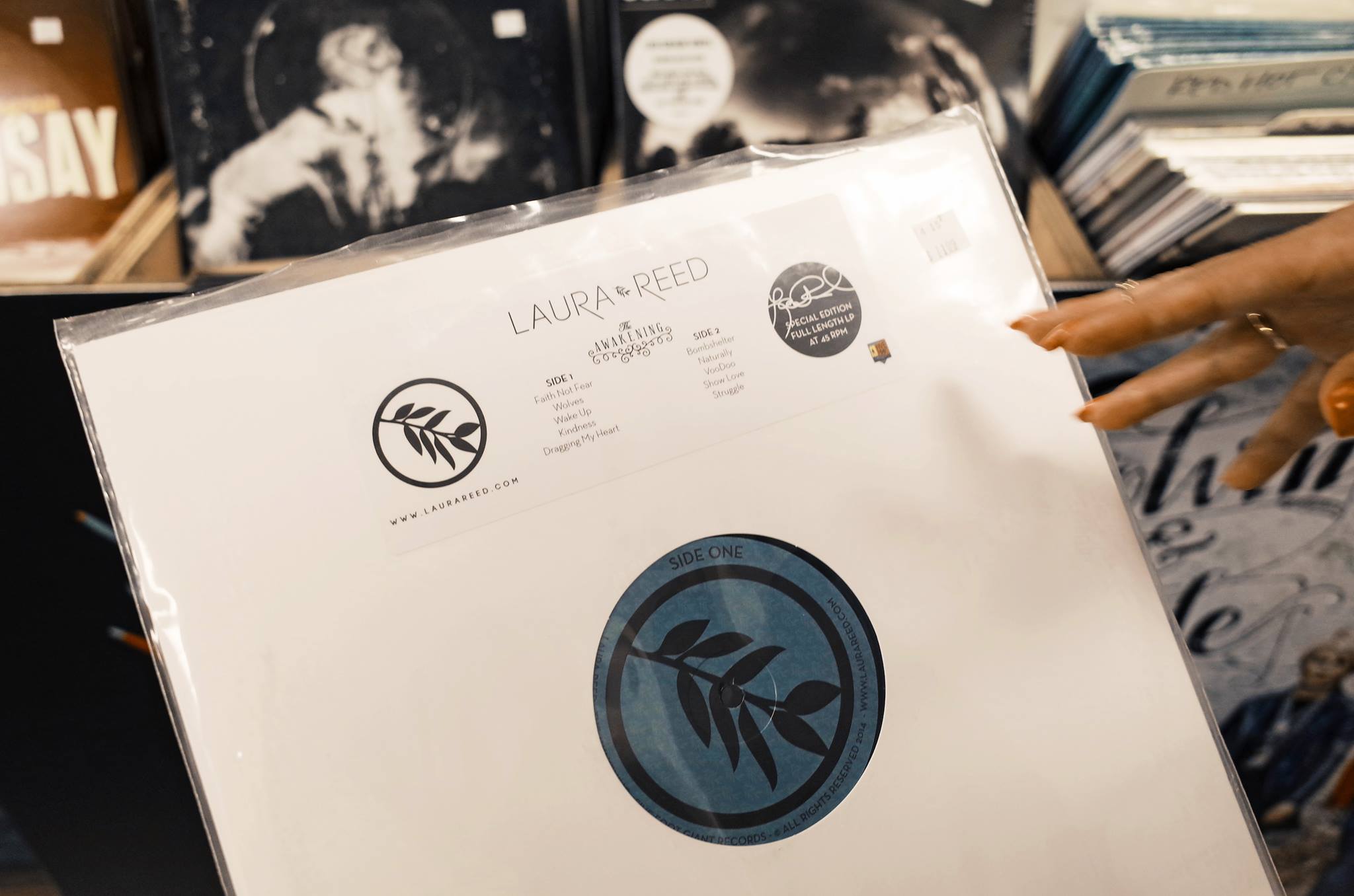 In our interview (recorded at Schoolkids Records), we discuss the choices that her fans make when considering vinyl, but also the choices artist must make when releasing their work on vinyl.

WARNING: What you may hear in this interview may shock you, and may also change some of your previously held misconceptions about the vinyl resurgence. Listener beware! 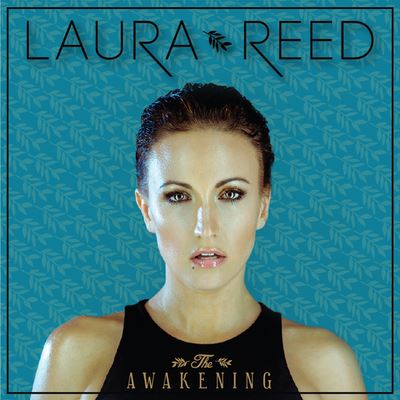 Laura’s debut album The Awakening, was pressed at United Record Pressing in Nashville, TN ­­– a record pressing plant that has been in operation since 1949. United has pressed records for such artists as The Beatles, Stevie Wonder, Michael Jackson, Jack White, Adele, Mumford & Sons, Hank Williams Jr., Lady Antebellum, Justin Timberlake, Kanye West, Kings of Leon, Fall Out Boy, Kendrick Lamar, The Black Keys, The Roots, and Radiohead. Today, it is the largest vinyl record pressing plant in the United States.

Reed’s revolutionary idea, (that I hope many vinyl recording artists will take on) is to release two packaged versions of the same album. In Laura’s example a “full­-deluxe” copy that includes liner notes, photos, and lyrics; alongside a scaled back “DJ copy” which is a spartanly-packaged version in the sense of packaging only that offers consumers the same vinyl press as the “full­-deluxe” version but at a lower price point, making it competitive with current CD prices.

Laura hopes that her fans make the decision to go vinyl. She is an avid collector herself. Most notable in her collection is a large section of rare ‘70s dancehall albums, and a few ultra­-rare “Edison Records” that she obtained when buying a hand crank Victrola player to go along with her standard Sony ES based vinyl system.

In our conversation, we covered the Crosley-made turntables that empower young people seeking to enter the vinyl hobby, and to do so at a price that “student budgets” will allow. Despite all the hatred for Crosley components, everyone has to start somewhere. Everyone had training wheels on their first bicycle, right?

Now, don’t get her wrong, Laura still capitalizes on the overall value of having a strong web presence, streaming her music on Pandora, Spotify, and iTunes. As for YouTube, the future of social networks, she is definitely not a stranger. Her song titled “Struggle” is a fresh track off the highly anticipated debut album, which not only captures Laura’s distinct voice but also her prowess as a songwriter who can manufacture impact at will.

By Dr. Panagiotis Karavitis There are legends in the hi-fi industry as in everything else. There is one, concerning a well-known US-based designer and his obsession for air transport as being the only safe way […]

Astonishment, personified US $16,995.00. There, I’ve said it, in bold. That’s nearly seventeen thousand dollars for a phono cartridge. I still remember the first turntable I bought back in 1981, it was a Luxman PD-284 […]

Jim Hagerman of Hagerman Technologies has a lesson in high-end audio economics going on over at Kickstarter. Here’s the problem. Say you’re a “little guy” manufacturer. You want to fill an order and you’re not […]