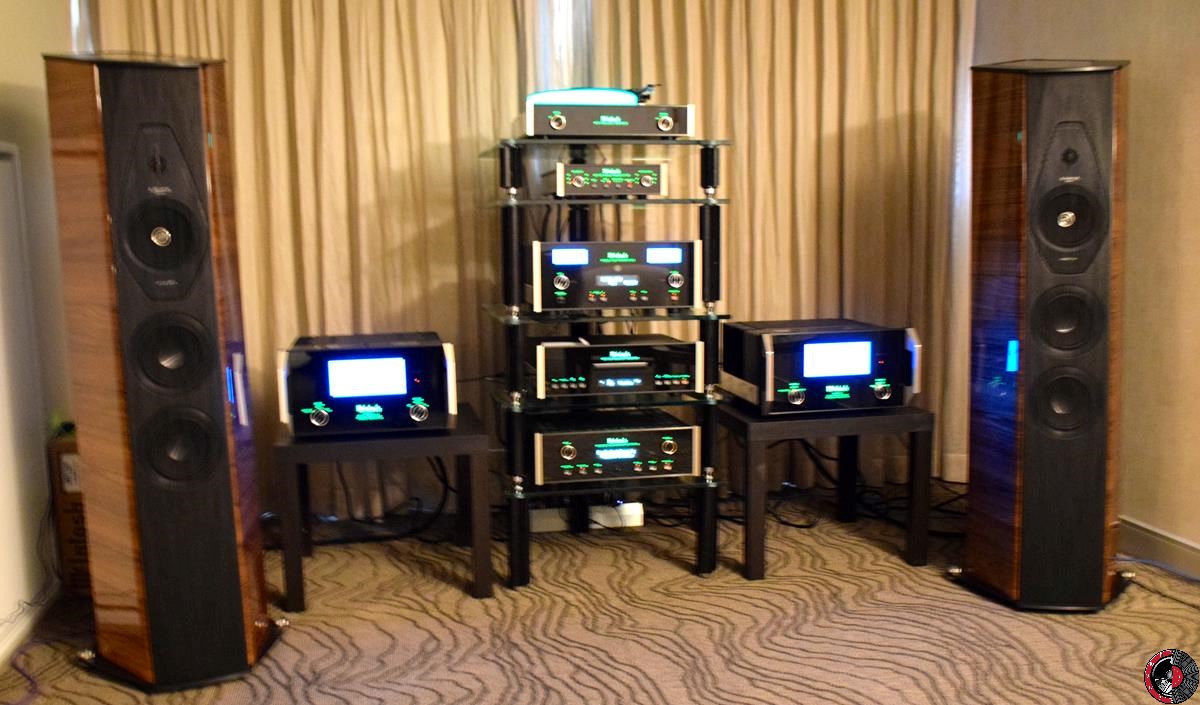 Many two-channel audio firms have abandoned efforts to develop products for the home-theater crowd, but one venerable manufacturer is doing much more than keeping a toe in those waters. New York-based manufacturer McIntosh Laboratory Inc. is in up to its shoulders, and swimming ahead at a strong pace.

McIntosh typically brings a formidable stereo rig to audio shows, with so many deep blue lights glowing that the demo room looks like the bridge of an alien craft in a sci-fi thriller. The company shipped its big audio system again to Denver for the Rocky Mountain Audio Fest, but this time rented a connecting room to show off some new A/V products as well.

The surround processor was the MX160 ($14,000), which supports object-based 3D audio formats including Dolby Atmos and Auro-3D and will be upgradable for DTS:X. The unit also decodes older sound technologies. On the video end, the MX160 plays 4K Ultra HD native sources and up-converts lower-resolutions formats to 4K Ultra HD.

The demo featured an aerial battle scene involving an American bomber and attacking enemy fighters. The roaring engines of the bomber showed off the system’s bass response, while the machine-gun fire and explosions were nicely positioned and could be tracked as bullets zipped by or found their mark. Dialog from three or four young U.S. flyboys also was clear amidst the din.

I asked a McIntosh rep if the MVP901, which produced a beautiful picture by the way, might be the company’s last video-disc player, now that streaming is disrupting the market.

“No, I don’t think so,” he replied. “So many people have thousands of dollars invested in their DVD libraries that there will continue to be a demand for quality players.”

I checked into the other room for a while and sampled a variety of tracks on the company’s two-channel rig, which included a variety of McIntosh components and a pair of Sonus Fabor II Cremonese speakers ($45,000 a pair). Sonus Faber is owned by McIntosh’s parent, Fine Sounds Group.

The sound from a streamed source sounded detailed, but liquid, which are typical traits of the Sonus Fabers and the McIntosh valve preamp. The bass was on the full side, which likely was a result of having such large speakers driven by 600 watts in a very small room.

The 67-year-old company lately has been holding road shows it calls “The World of McIntosh.” From its RMAF exhibit, it appears to be thriving on both the video and two-channel ends of the home-electronics globe. Expect those blue lights to be glowing for some time to come.

I was really burned out from a long work week at nearby Northwestern University.  I was so looking forward to AXPONA as the medicine to my working man blues.  The only thing stopping me was […]

World of McIntosh: Listening to the Sonus Faber Amati Tradition

The McIntosh Group had set up representatives of the new Homage Tradition loudspeaker line in different listening rooms, scattered throughout the WoM Townhouse, and then invited their dealers, distributors and the local press to wander about, to see, […]

Smiles greeted me from a number of manufacturer representatives as I headed into HiFi Centre for the second, and final day of the inaugural Vancouver Audio Festival. Seems those tasked with room demos had been […]