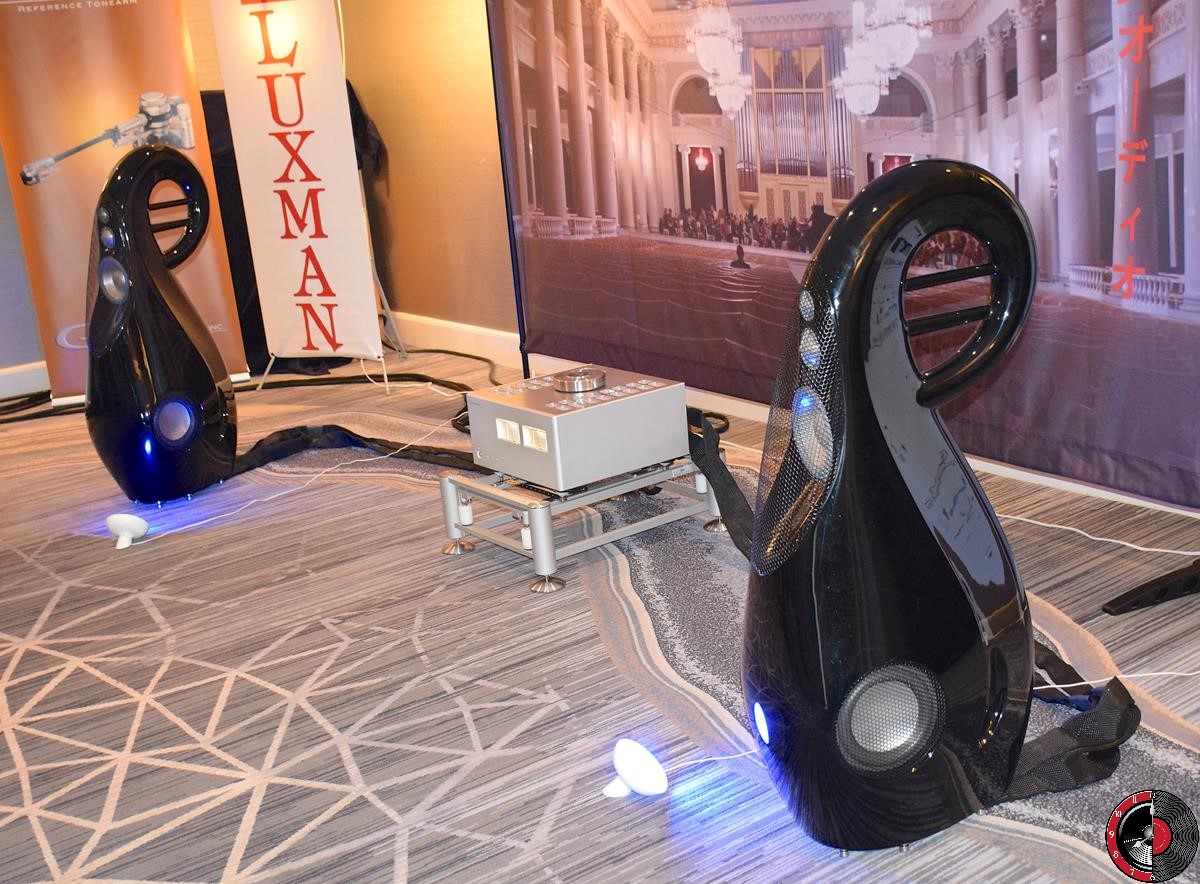 I have a confession: I started an emotional affair with the Vivid Audio Giya G3 after meeting her and her twin at several recent audio shows. But like most new girlfriends, I was attracted by her looks, yet unsure about her personality.

When the G3 and I met up in Denver at the Rocky Mountain Audio Fest, I again felt my heart flutter. But this time, 20 minutes in her company convinced me there was talent, intelligence and refinement under that alluring exterior.

Accessorized with gear from Luxman, TechDAS and Magnan Audio Cables, the G3 was drawing eyes from a dozen others in the room. I was jealous, but couldn’t stop looking and listening to her all the same.

The G3 was brought to this party by Kyomi Audio and On a Higher Note. Their good-size room on the mezzanine level of the Marriott Tech Center proved to be a comfortable space for the transducer to model her good looks and sultry singing voice.

The Vivid G3 ($40,000) is a four-way speaker made in Durban, South Africa. The driver compliment consists of a 1-inch tweeter, a 2-inch upper-midrange driver, a 4.9-inch lower-midrange unit and two 5.5-inch woofers. (All are custom-made aluminum domes.) Frequency response: is 36–33,000 kHz and sensitivity is 87 decibels.

Those bespoke drivers are impressive enough, but what catches your attention first, of course, is the G3’s gorgeous exterior. The model is shaped unlike any other speaker, with a rounded, teardrop bottom that gracefully tapers into what resembles a jungle-size fern frond preparing to unfurl.

That shapely cabinet is made from a glass-reinforced, balsa-cored sandwich composite and coated in multi-component, high-gloss automotive paint. Weight is 41 pounds

On a Higher Note’s Philip O’Hanlon cued up Eric Clapton’s Unplugged, a well-recorded live performance that, with the right rig, can give you a solid facsimile of being in England’s Bray Film Studios in January 1992.

Clapton’s heavily rearranged “Layla” from that night has been played to death, but on the G3 it seemed to be presented with a new energy. The sound, for a smaller speaker in a large room, had unexpected weight and dynamics. The treble was refined and airy, Clapton’s underrated voice had texture and immediacy, and the bass — considering the relatively small low-frequency drivers — was deep and well-defined.

Kyomi and Higher Note had spent considerable time measuring the room acoustically and experimenting with placement. The G3s ended up spread fairly far apart, about three feet from the back wall and well away from the sides. The careful positioning created a wide, deep soundstage. In the sweet spot — which did not require me to lock my head in a vice, by the way — instruments emerged in sharp focus and were easily followed against an impressively black background.

I would theorize that the G3s comely shape probably is adept at minimizing diffractions and its all-aluminum set of drivers is especially good at integrating with one another. As for that bass, I guess Vivid’s designers have discovered some interesting physics that allows them to plumb the depths without distortion.

I lingered for a while in my center seat, listening to more Slowhand and watching the Giya G3 being fawned over by a group of new admirers. I realized I was a fool for thinking our relationship was going to be exclusive. Yet, I can’t wait to see her again.

$275,000 will buy a lot of things. A house in Florida. An Ivy-League college education — for two. A new Bentley to tool around in during the week — and a new Aston Martin for […]