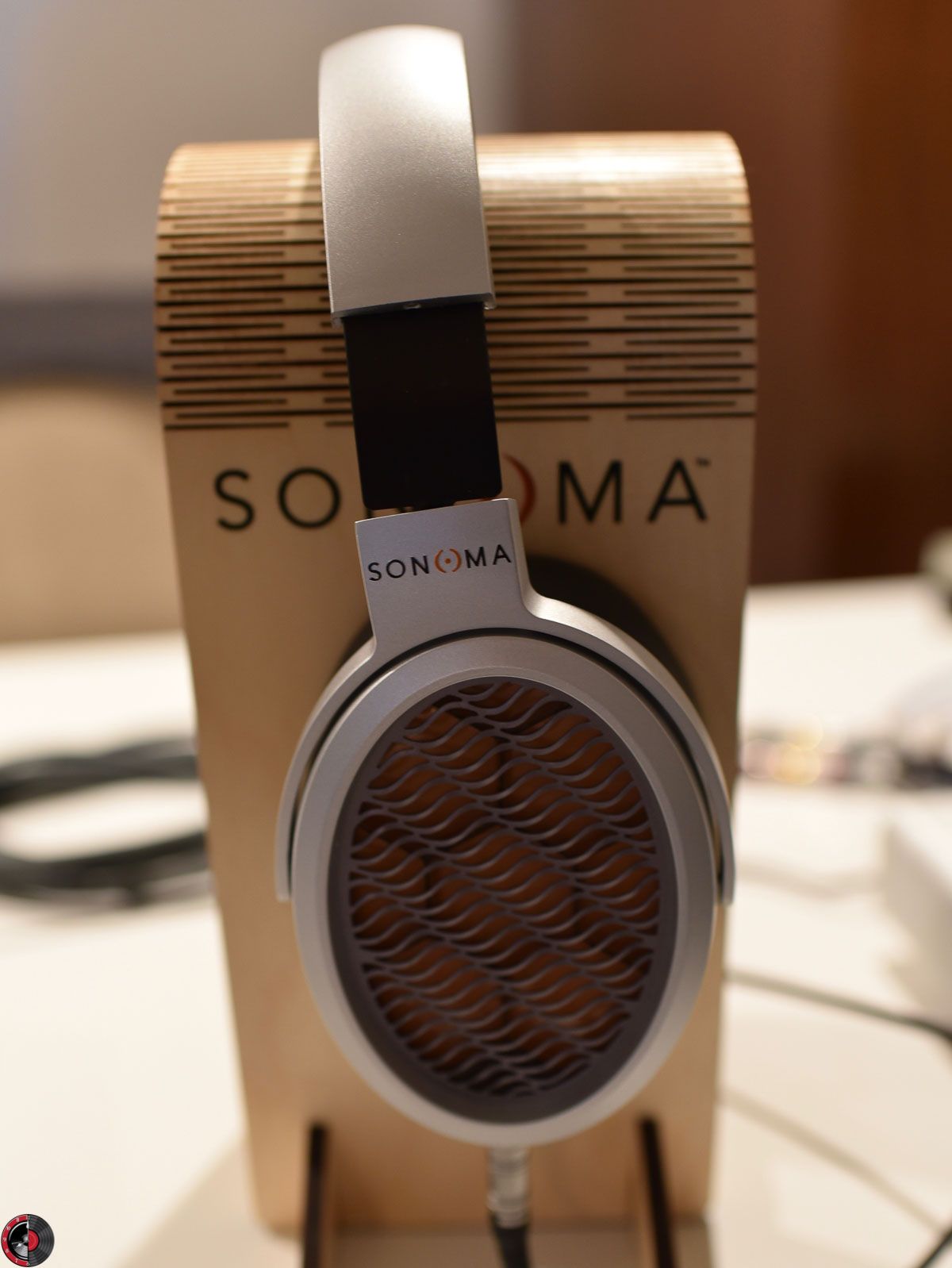 Much of what makes this hobby fun are the highly creative characters behind much of the music and audio business.  When I read about Sonoma introducing a headphone rig, it became a must see room for me and two people I know, Gus Skinas and David Kawakami, are behind it.  These guys are really smart and creative and were a real force behind DSD and the Super Audio format.  What would these guys dream up next?  Why another reference level headphone?  What could they add?

First, a little context about my excitement… I met David Kawakami around 2000 at an audio show in New York City while roaming the halls between systems.  David essentially ran and built Sony’s Super Audio team and was very involved in all aspects of the launch.  I had been in the market for a Super Audio player from Sony and who better to ask advice than David.  At the time, the players had just come out and you had the $5K SCD-1 flagship and the $3.5K SCD-777ES player which lacked balanced outs.  Both had similar circuitry and a really cool top loading drawer that opened to reveal a spindle upon which on would place the SACD and then place a polished brass “puck” to hold the disc in place by sheer weight.  David recommended the SCD-777ES as the better value if I did not need balanced outputs.  That year I got a nice bonus and took advantage of a J&R Music deal and got the SCD-777ES for $2K.  This player still runs fine and sits on the top of my equipment rack to this day.  There are better CD and SACD players now but I’d have to spend a lot of money to get a better transport.  Thanks David for a terrific recommendation so plus one brownie point for Mr. Super Audio.  By the way, you know those Super Bit Mapped CDs you see from Sony?  David worked on that with Ayataka Nishio, the engineer who invented it.  David and Nishio added in high-speed sampling and SBM became Direct Stream Digital, the underlying technology of Super Audio.

Second, the guy behind the curtain Gus Skinas.  As I built up my SACD collection I kept seeing certain names pop up in the liner notes including Gus Skinas.  Gus was very involved in Super Audio on the technical side.  Gus started at Sony Pro Audio as one of maybe four people and helped launch Super Audio.  Gus eventually wound up running the Super Audio Center located within the Air Show Mastering building in Boulder which played a huge role in the mastering and authoring of the Sony SACD titles.  During a couple of Rocky Mountain Audio Fests, Gus opened up his large mastering room and invited a few of us to listen to pure DSD in spectacular surround sound.  To this day some of the best playback I have heard.  Gus was instrumental in the design of the expensive Sony loudspeakers that he used in the room.

Here is where Sonoma comes in.  Gus built a multi-track recorder and editor that uses the underlying DSD/pulse-width modulated technology to make better sounding digital recordings and discs.  In my opinion, much better sounding.  If good SACD playback does not move you, then go see an ENT.  Super Audio sound much more analog to my ears.  The Sonoma workstation made modern production of Super Audio discs much easier as it allowed editing functions in DSD.  It was the final link in the production chain.  That would be enough for Gus to have audio legend status, but the best thing is that Gus is a genuinely nice guy and has an infectious enthusiasm for great sound.  His generosity and open door policy at the Super Audio Center scores him a brownie point.

Also on the team are John Garrison, a business leader, who built GreatCall and Dr. Andrew Demery, another Super Audio whiz kid who built the first DSD recording at Philips.  Dr. Demery later joined Gus and helped on the Sonoma workstation.  We would be remiss to not mention Dan Anagnos who designed the Sony SSM9 ED speakers which are world class monitors used at Gus’ Super Audio Center.  Dan has designed the Model One headphones which we will detail.

But what are these Super Audio pioneers up to these days?

David and Gus has created a new technology to apply to reference headphones which is also branded Sonoma. The Model One headphone system which costs $5K includes a Sonoma DAC/amp and the new Sonoma electrostatic headphones.  Yeah, I know.  There is no shortage of electrostatic reference cans.  These, however, use a new technology from Warwick Audio Technologies, Ltd. that creates what they call a High-Precision Electrostatic Laminate (HPEL).  Warwick has a patented process which allows it to make these electrostatic panels very consistent.  The resulting panel is very consistent at 15 microns thickness across the entire driver, single-ended so there is a bias that pulls it into place.  For electrostatic headphones you need an “energizer” and that is where the paired DAC/amp comes into place.  A nice feature of it is the availability of analog inputs and digital inputs so you can fly by computer or turntable sources.  The “energizing amplifier” uses an AKM chip with better than a 120db signal to noise ratio to convert the analog input signals to 384khz PCM.  For DSD playback, the 32 bit Sabre Reference DAC is used with a measured 129db signal to noise ratio.  On the usb input the unit does DSD via DoP (both DSD64 and DSD128) and the SPDIF input handles PCM up to 24/192.

For the Sonoma room, they had a world-class source: Gus brought his Ampex ATR-104!  He played the half-inch two-track of Janis Ian’s Breaking Silence reel which was fed into the Energizing Amplifier.  Digital computer files from Gus work in DSD and from Warwick allowed us to hear digital sources too via the usb input.

The sound was spectacular.  Clear as a bell, open, rich in the midrange, neutral.  All my audiophile bells were ringing.  $5K for the entire system and the cans are comfortable too featuring Cabretta hair sheep leather known for light weight and durability and also injected magnesium ear cups for further weight savings.  Add a laptop with a music app to feed the ones and zeroes and you are good to go.  Many electrostatic systems at this level cost upwards of $10-15K and you don’t always get a DAC included.  And I’m frankly not sure they sound as good.  I will have to investigate that further.

As if this was not enough, Dan’s SSM9 ED loudspeakers were in the “living room” portion of Sonoma’s suite and they sounded excellent too with great extension and clarity.

Sonoma was simply one of my favorite rooms at RMAF.

Hometown dealer Apex Audio presented some of the most complete, well-thought-out rooms at the Marriott Denver Tech Center for RMAF 2015. I didn’t have an opportunity to take the retailer’s stretch limo service to its […]

RMAF12: Channel D and their silky sonata in the key of Seta

I’ve been using Dr. Rob Robinson’s “Pure Music” software program for a couple of years now. I prefer it, one, because it works as advertised, and two, because it was vastly less expensive than its […]

In addition to their table downstairs in Can Jam, Astell & Kern were also hosting a veritable garden of delights in their room in the Atrium. There was apparently just too much shiny to fit […]