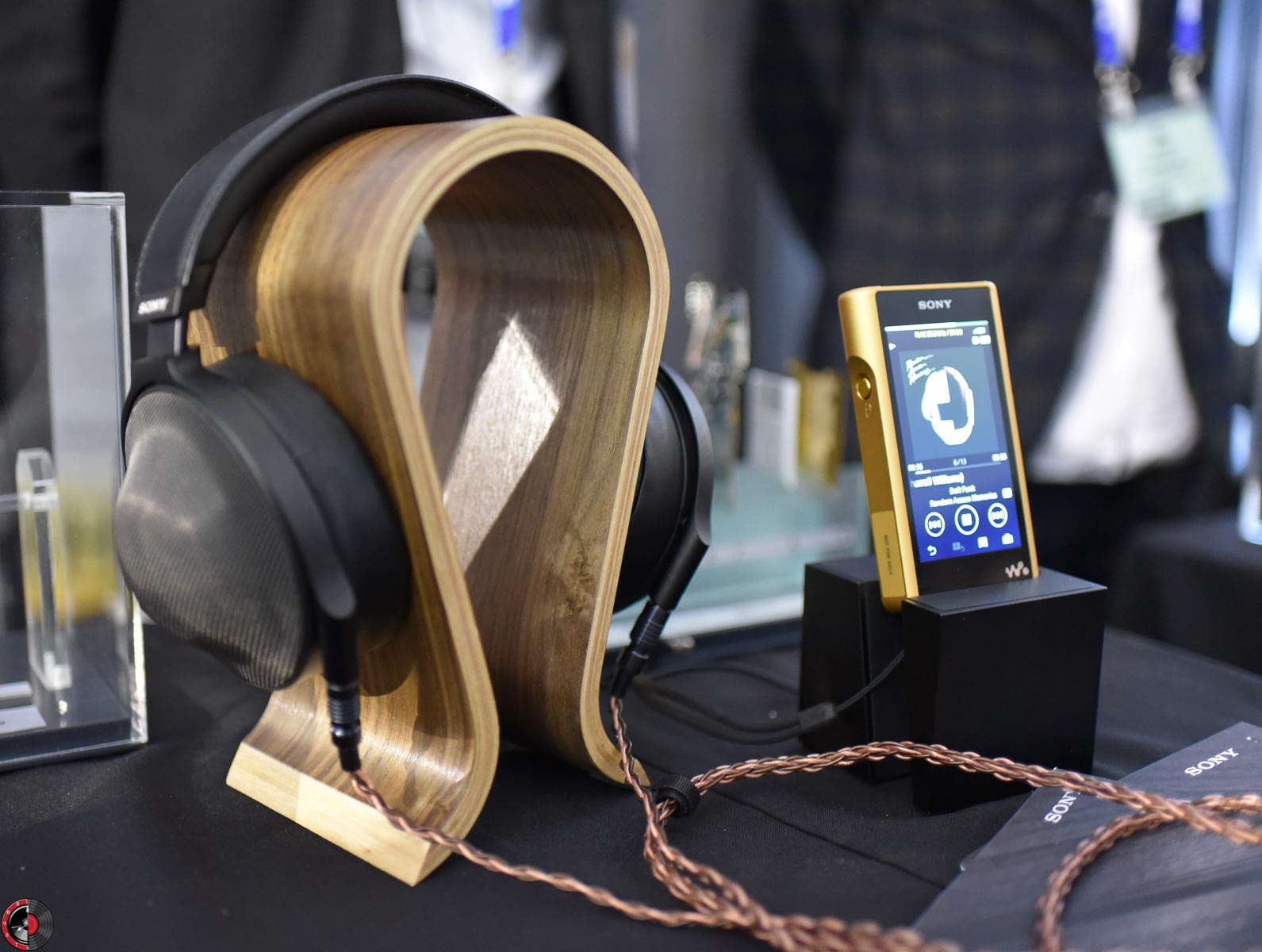 It’s always fun to see Naotaka Tsunado from Sony at Rocky Mountain.  I first met Nao at a Chesky recording session in Brooklyn and he has always shown great enthusiasm for portable audio.  This year he brought along two colleagues from Japan and a deep and wide display of the latest Sony gear.  Sony has been really investing heavily in portable audio and Kimber Kable has been supplying the headphone cables for a nice East-West collaboration.  The Kimber headphone cables sound very good the three or four times I have tried them.  As an added bonus, they look gorgeous as well which hopefully some of my photos will highlight.

Sony was a real standout at CanJam — definitely one of my favorite booths.  They had the trifecta of product introductions…new flagship headphone, new headphone desktop amplifier, and new portable DAC/amps.  Much like I saw up close with my beloved Super Audio format, Sony can be very creative and technically advanced and I think that is holding up in personal audio as well.  Let’s get to the exciting part right away…. Sony has built some high-level DAPs that sound as good as they look starting with the flagship NW-WM1Z digital audio player. Using a very solid oxygen free copper for the chassis, this unit has 256 gigabytes of built-in memory and an available micro-SD slot.  As one might expect from Sony, it has native DSD support up to 11.2 megahertz. PCM is supported to 32 bit/384khz.  It supports both balanced and unbalanced playback and has 33 hours of playback time.  It’s built like a tank.  Best of all it sounded great with my Audeze Sines and the new Sony flagship cans. The screen is beautiful and the case is solid, a little heavy too but more in the way of how a Leica camera from solid build quality not in any excess of weight.  User navigation was pretty straightforward. I’m more of a desktop DAC guy so I’m not exactly Mr. Smooth when it comes to DAP operation. This was pretty intuitive and functional for me.  This all out assault of a DAP retails for $3,200.

But Nao brought out the smaller version of its DAPs… the NW-WM1A player which sells for $1,200.  This is something more affordable but still bulletproof in terms of both native DSD and PCM playback and balanced outputs.  Built-in memory is 128 gigabytes and battery life is an estimated 30 hours. It even streams Bluetooth.

Some may want a high quality desktop DAC/amp and here we saw Sony’s new TA-ZH1ES amplifier, presumably to do the big flagship headphones justice.  The TA is a hybrid digital/analog amp with a sophisticated built-in usb DAC supporting 22.4mhz DSD and 32/768khz PCM — pretty much any files you would need for the extended future.  What is cool is that it has what Sony calls a “remastering engine” that converts PCM to DSD running at 11.2mhz which Sony believes offers the best sound.  It offers both balanced and unbalanced outputs and has very nice casework with fine perforations on top for managing heat.  On the input side this is a very versatile unit with analog inputs, optical inputs, coax inputs and USB-B.  I listened to both PCM and DSD files and it really sounded wonderful, again on both my own Audeze Sines or the Sony flagship cans.

Speaking of flagship cans, the Sony MDR-Z1R was on display. These $2,300 headphones sounded excellent paired with the TA headphone amp. They use a 2.76 inch diaphragm with a magnesium dome and a liquid crystal polymer edge said to allow reproduction to a very high 120khz.  Frequency response is said to be a super wide 4hz to 120khz.  The driver is housed in an acoustical cage designed to filter out any resonances. They are comfortable in part due to sheepskin ear pads and a nice over the ear design.  The cable connections allow the use of standard cables or better yet the gorgeous braided Kimber Kables specific to the Sony gear. The standard cables use silver-coated oxygen free copper and the Kimber line offers a variety starting with plain copper and working up to reference level silver wire.

This was one of the best booths in the RMAF CanJam tent. It’s clear Sony has made a big financial commitment and it sounded like it too.

You gotta love Ben Zwickel of Mojo Audio. The guy is so clearly into the nooks and crannies of audio’s high-end that it practically jumps off of him in sparks. Mojo, in case you don’t […]

Even though it’s Labour Day around the world, and we’re all supposed to be doing our level best to avoid work like the plague, I felt compelled to bring you news that digital-music juggernaut MQA has […]

Audio Advice LIVE 2022, It’s a Wrap! RALEIGH, NC (PTA) — The Sheraton Hotel in Raleigh, North Carolina has long since returned to normal. The exhibitors have long since packed up, loaded their chariots, and flown […]