The bruises were the color of a sunset, and spread across my upper back like a watercolor painting. I had noticed some marks first after showering on Friday morning, but by Saturday evening they were in full bloom, and I felt like I had been tattooed.

Sorry, I should back this up so I’m making sense.

I had been warned that CES would get me. Everyone who heard I was going to Vegas, and that it was also my first time at the Consumer Electronics Show had advice  for me. Whether it was how to maintain energy levels, choosing appropriate clothing and shoes, or how to make sure I didn’t catch a bug (lots of hand sanitizer), there was no lack of friendly advice. What no one told me was how to make sure you don’t end up with a Muay Thai fighter  for a masseur. I had gone to dinner with friends Thursday night, and after some spectacular Thai food, my host for the evening suggested a massage to finish off the day so we’d be well rested. It was a brilliant idea, but I ended up with the man of iron fists who mercilessly pummeled me for 30 minutes. I almost passed out from the pain at one point when he was standing on my back, but endured because I thought it was “good for me,” and to be honest by the time I hit the sack I felt pretty damn good, and slept like a baby.

CES is like that masseur: it’s hard on your body, it can hurt, it will leave a mark, but by the time the day is done, and you look back at all the great people you connected with, you start to feel pretty damn good. So it was Saturday that when I took stock of what I had been able to accomplish, I was somewhat pleased with myself. Hopefully you will be too.

If you like vinyl records, and you like incredibly well-mastered vinyl records, then odds are you own some titles put out by Mobile Fidelity Sound Lab. And, if you do own some MFSL titles, then you probably recognize the names Shawn R. Britton, and Rob LoVerde. These two gentleman are responsible for a huge catalog of work on many of the very finest albums I’ve had the good fortune to listen to, and own. So when the two of them, and I started to talk (and laugh our heads off) while I was visiting the Mobile Fidelity suite to hear the new Ultra Disc One-Step pressing of the Bill Evans Trio Live at the Village Vanguard, I knew I had to convince them to do a video with me. To my surprise they both agreed, so please watch our somewhat impromptu interviews. I’ve split it into two because there was just so much to cover.

Sandy Gross of GoldenEar Technology has been very busy. He was showing his latest Flagship speaker design, the Triton Reference this weekend in Vegas, and there was a not inconsiderable amount of buzz in the hallways of the Venetian among show goers who had either heard a demo of the loudspeaker, or were planning to go hear them. The 12 Hz – 35 kHz capable, and 93.25 dB efficient Reference has already bagged a CES Innovations Design and Engineering Award, I’m assuming because: A) They look good in a room (despite their size, they actually blend into the background somehow). B) They have an absolutely sobering amount of deep, controlled bass, fantastic imaging (even in the near field, and off-axis), tick all the boxes for clean, dynamic portrayal of instruments, and especially voices, and C) Cost all of $8,500 USD. Getting juiced by a pair of Pass Labs XS150 mono blocks, and a PS Audio Directstream Memory Player, this was a sound I wish I had more time to spend listening to.

One of the last rooms I was able to take in Saturday was Burmester. The company’s North American CEO Robb Neimann was on hand for the world debut of the B18 loudspeaker. The 2.5-way, bass-reflex floor stander was being fed by an all-Burmester system that included the highly coveted (by me) Phono 100 preamplifier, and 911 MK 3 power amplifier. The Thorens TD 550 ‘table that was sitting like a giant chrome cherry on top of the rack made me slightly weak-kneed. 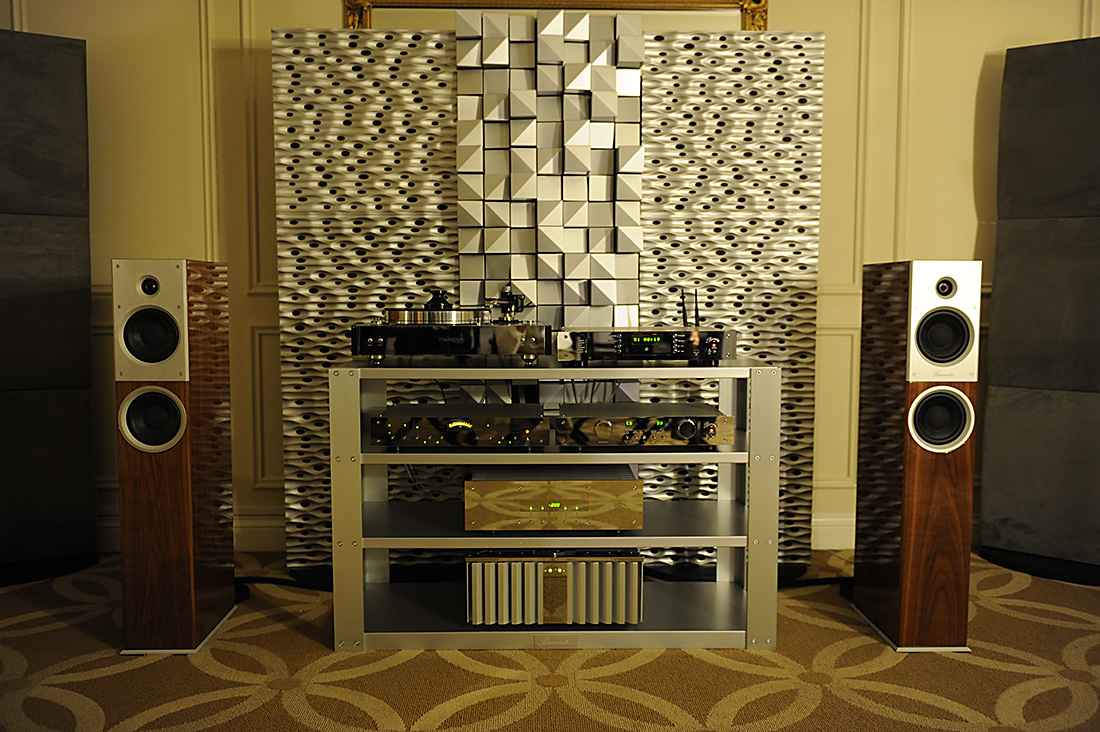 The sound from the new B18s was pure Burmester, which if you’re not familiar with their sound, is all about incredible cohesion, power, smoothness, and uncanny musicality.

Neimann was also showing off the Phase 3 all-in-one system in both chrome, and cut-steel black. This a real design concept statement piece, and is situated in a very unique position in the market to my mind. With more connectivity, and playback options than I could keep straight in my head (DLNA/UPnP server, up to 24/192 FLAC/wav/mp3/AIFF/OGG/AAC/ALAC file compatibility, 2×2 TB hard-drive capacity for music storage… I could go on), it’s also seems future-proof.

GoldenEar Triton References: in Dealers Now and Ready for Audition

A little bird (okay, okay, it was Sandy Gross) told me that the long-lusted-for (by yours truly) flagship GoldenEar loudspeakers, the Triton Reference ($8,498US/pair), are now “out in the wild”. Highly anticipated, GoldenEar has now […]

Astonishment, personified US $16,995.00. There, I’ve said it, in bold. That’s nearly seventeen thousand dollars for a phono cartridge. I still remember the first turntable I bought back in 1981, it was a Luxman PD-284 […]