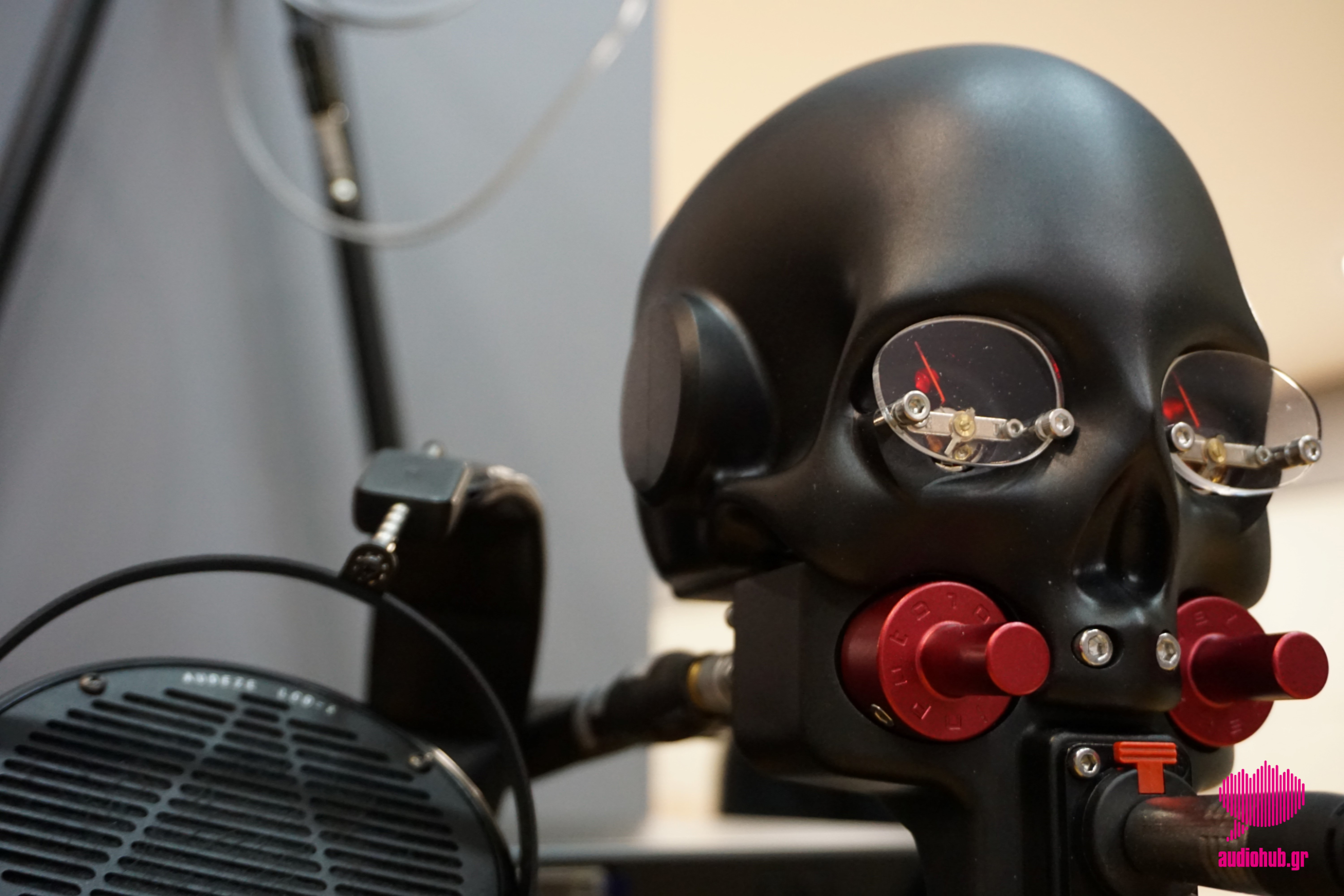 So I get an email from Kostas Metaxas of Metaxas and Sins in which I am asked if I would care to listen to the new Marquis Memento Mori headphone amplifier (lets call it the Skull from now on). I would do almost anything to get my hands on that piece of sculpture, so I try to play cool, hold my breath and reply in an appropriate fashion. Yes Kostas, why not (as in hellyeah, asap)

But I don’t want to get greedy, many friends would like to see, touch, hear the Skull. Instead of bringing the thing to my place I get to arrange a public meeting for all Audiohub.gr members (my personal audio related forum) at the all new brick and mortar shop “South Sounds”, a joined venture of Mr. Koulis and Mr. Kopsaftopoulos located in the southern Athens neighborhood of Glyfada. 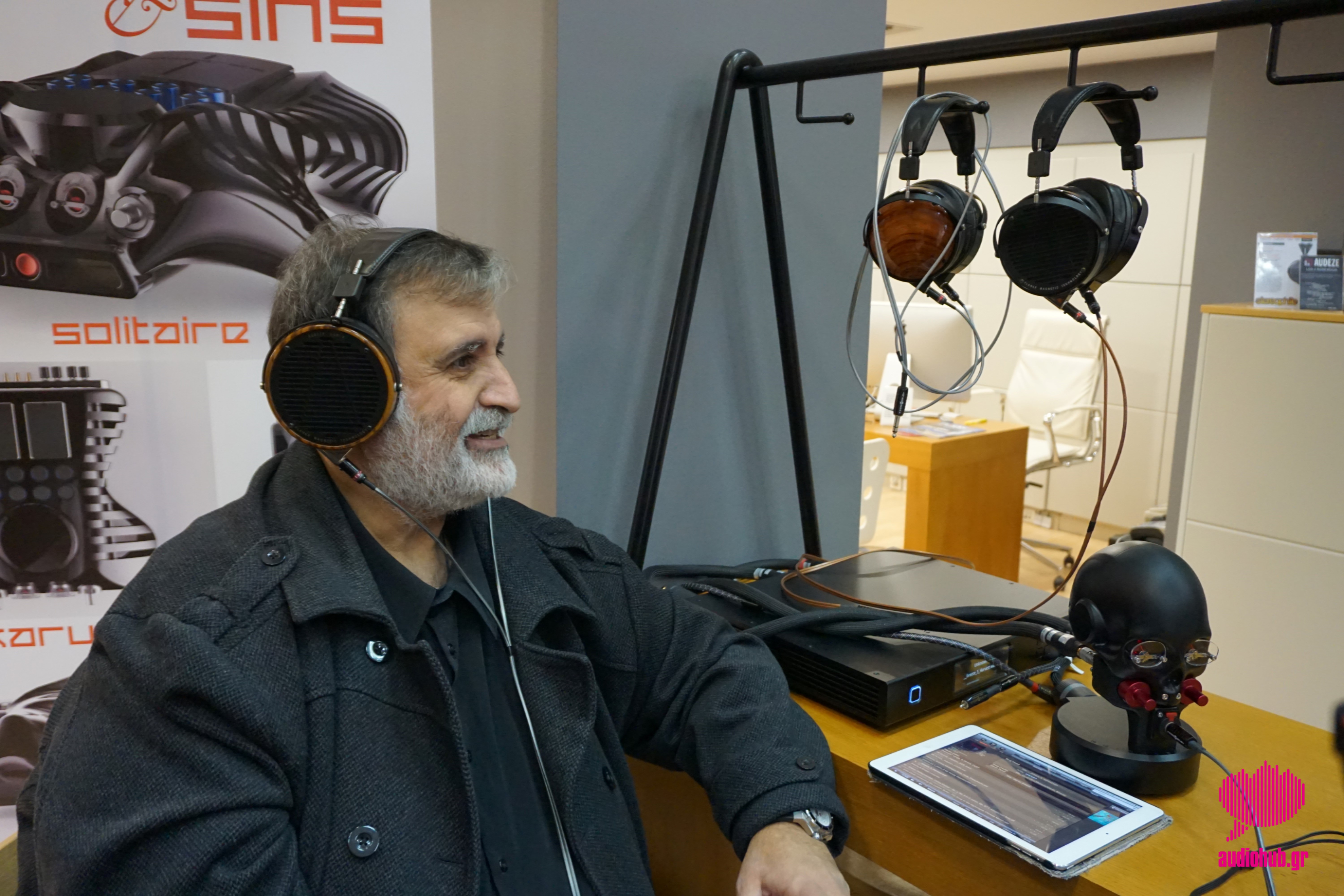 We don’t get much of a rain here in Athens, especially in March but the weather was bloody awful, pouring non-stop for the entire event. But the attraction for the Skull was overwhelming and getting to be the first ever to give it a try proved to be enough of a desire for some twenty friends to show up. An added value, the guys behind South Sounds import Audeze cans for the Greek market along with Wireworld cables and Aurender.

By the time I got there Kostas had already set his creation on the bench, along with a complete line up of Audeze cans paired to the latest Aurender A10 which acted as DAC and streamer. There were 3 Wireworld headphone cables to swap, an “entry level” copper one named Nano Eclipse, a silver plated copper, the Nano Silver Eclipse and the top of the line pure silver Nano Platinum. 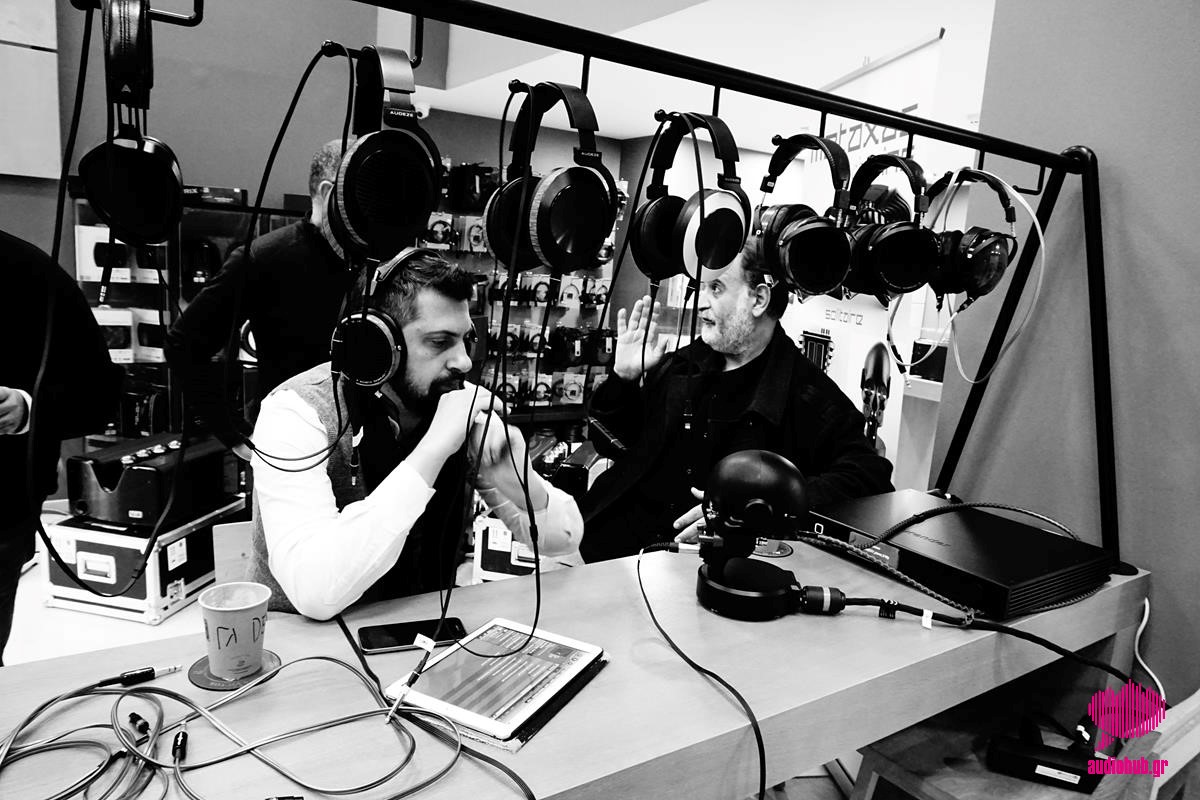 I barely said hello and went straight for the amp. Call it a fatal attraction, this thing is nowhere close at whatever else there is out there. The pre-production sample we had in hand was anodized in black with burgundy red knobs and similarly colored LEDs inside the orbits. A pair of real VU meters were fitted inside the orbits as well, a touch that gave life to the Skull. A striking sculpture!

Two line inputs and a pre-amplifier output can be found in the occipital bone. The Skull is indeed a revision of the Metaxas Marquis studio grade preamplifier and can be used as such with great results. The bottom of the design conceals a toroidal transformer while all circuit boards are hidden within the Skull’s cavity. 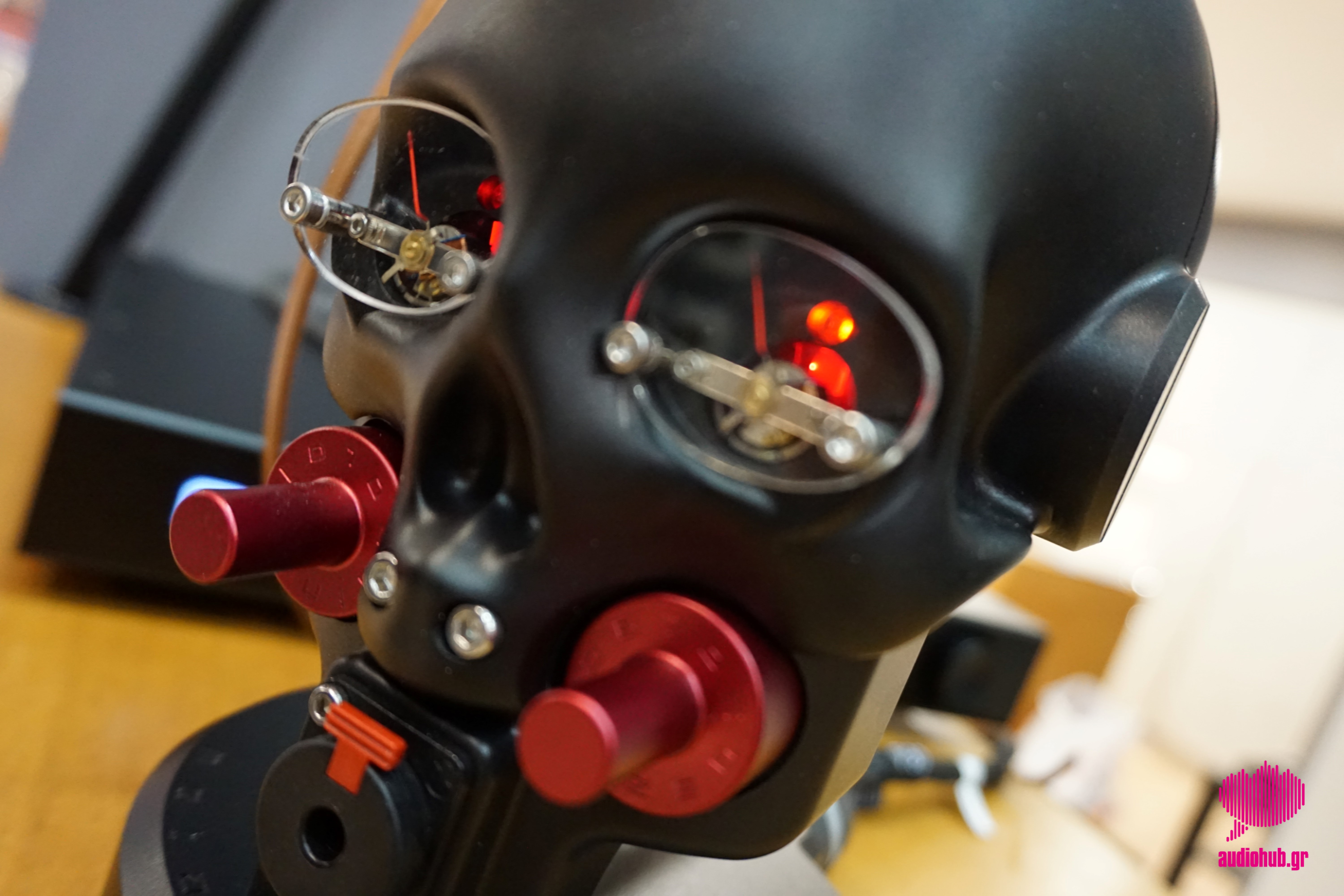 The Memento Mori is made out of solid billets of aluminum carved on a state of the art 5-axis CNC machine in Germany and weights quite a lot considering the size, a tad smaller than an actual human skull. The zygomatic process is of a striking elegance and despite the entire structure is smoothed out let me tell you as a Dr. that it is a credible replica in terms of proportions and structure’s placement. It won’t spook you but holding it in hand will make you meditate if you want to be or not to be.

I would consider buying one just to look at, it is a true work of art, but after just a few seconds of listening to the Skull let me tell you that it should be judged as a very serious headphone amplifier going beyond mere aesthetics. A friend told me he never heard the Audeze LCD-2 cans sound this good. The level of transparency, detail retrieval and musical expression of the Marquis Memento Mori amplifier is truly top notch.

My favorite combo was the LCD-3 with Wireworld Platinum cables but others insisted on the LCD-X with the pure copper Nano Eclipse cables. It came down to personal taste but it was instantly obvious that the amp was not imprinting a personal trait on the headphones, each pair of cans preserved its own character. Cable differences were also quite obvious, Kostas noted more than once the big differences he was getting from the various Wireworld Eclipse models.

I was told that half of the first batch was already sold to customers from around the world and I cannot envy them more, even if the price is bound to be steep. At 6500 euros for the anodized black version this is clearly an expensive piece of gear but considering one buys a powerful, refined and musical amplifier with a design that will captivate the eyes of anyone entering the room it certainly sounds more like a personal statement of one’s taste than a simple piece of gear.

Walking into the mbl loudspeakers room at T.H.E. Show 2019 did bring back a lot of memories, back to the days when I first started exhibiting at high-end audio shows with Colleen Cardas for our […]

By Michael Mercer Armed with Astell&Kern’s AK100 Hi Rez player, an ALO Audio International headphone amp and a pair of Audeze LCD3’s…. I never thought portable could sound this good.  Nor did I ever imagine I would […]

It seems like lately, I’ve been reconsidering some past held audio prejudices.  For one, I have started to re-evaluate low power amps and what they are capable of.  Two, I am understanding in more detail […]