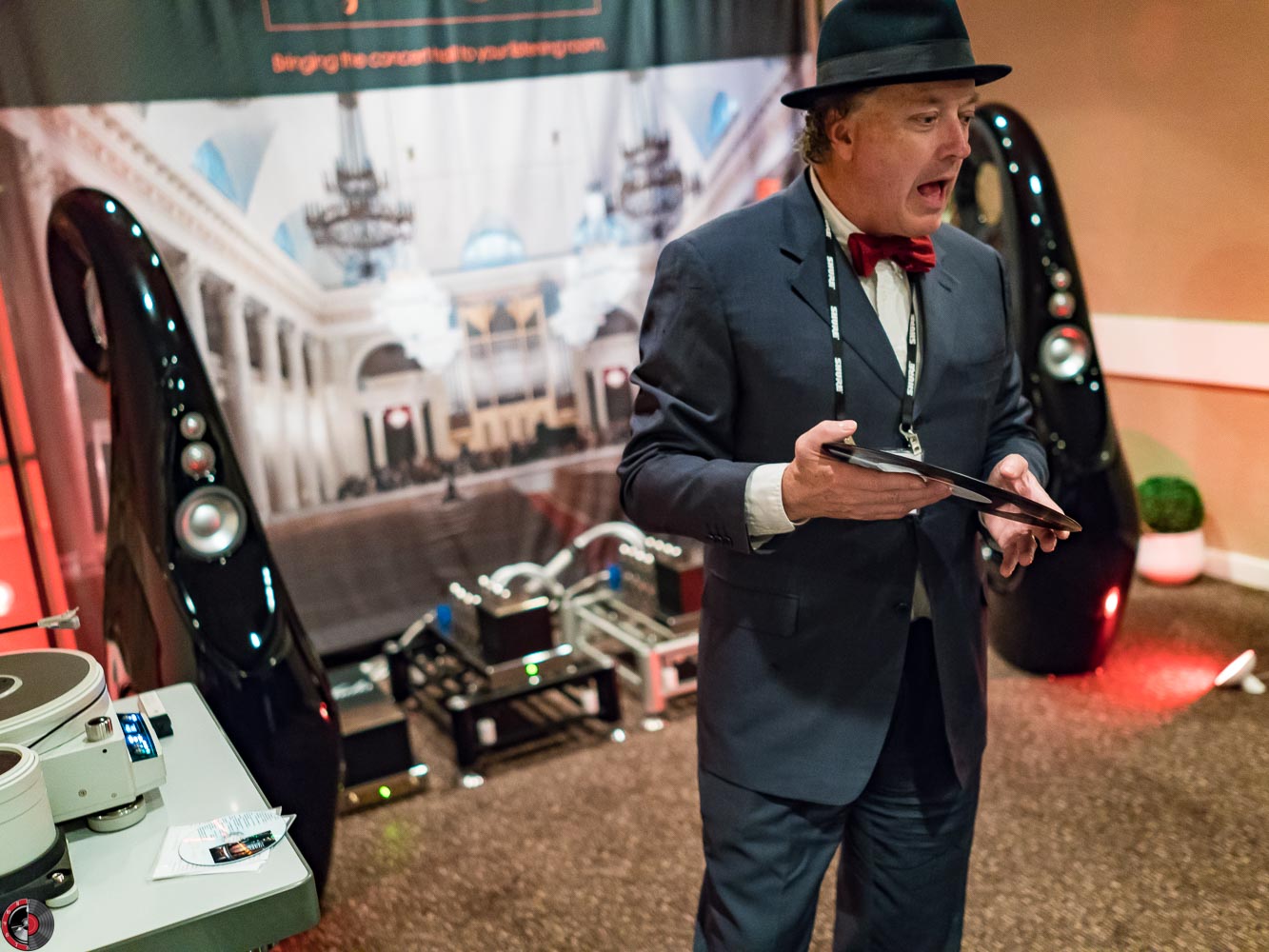 Kyomi Audio and On a Higher Note combined the old and the new to produce alluring sound — and spooky time travel — in their demo room at AXPONA.

First off, in the old category, was the music itself. The demo disc was a pristine 1947 mono pressing of Duke Ellington’s Liberian Suite (last seen going for $40 to $50 on eBay). This Columbia release was one of the earliest long-players and was cut straight to lacquer.

The newest technology was the speakers playing the Ellington tunes, the Vivid Audio G1 Series 2 ($68,000 a pair). The innovative speaker, built in Durban, South Africa, mounts its five bespoke drivers in a semi-teardrop-shaped cabinet made from a glass-reinforced, balsa-cored sandwich composite that’s coated in high-gloss automotive paint.

The first track on Ellington’s Liberian Suite, “I Like the Sunrise,” features vocalist Al Hibbler. On the Vivid-Jadis system, there was an astonishingly, well, vivid illusion of a live big band in the room — soaring horns, shimmering cymbals and Hibbler’s smooth crooning.

Forget stereo affects. The rig decoded the early mono LP to produce a wide, deep soundstage with realistic instrument layering. Hibbler’s voice was focused at center-stage, while the individual band members took their turns precisely playing melody lines and accents behind him.

Also helping send listeners back in time was an analogue front end consisting of a TechDAS Air Force Three turntable ($29,750), outfitted with a Graham Elite tonearm ($12,000) with an Ortofon Cadenza mono cartridge ($1,280). Also on hand was a Koetsu Jade Platinum cartridge ($9,995).

Together, the gear in the Kyomi-On a Higher Note room may have been playing an LP made 70 years ago, but it sounded as visceral and immediate as if Ellington were present today. That’s a hard trick to pull off.

Part-Time Audiophile contributor Mal Kenney was a big fan of Endeavor Audio when he caught them at the California Audio Show last year. Big fan. I mean, there was the whole dial-it-up-to-eleven after hours next […]

Pairing a huge 16” woofer with a compression tweeter usually leaves a gap in the crucial mid frequencies but Blumenhofer Acoustics managed to get things right. The Genuin FS1 mk2 pairs the woofer with a […]