I had to chuckle a little to myself when Volti Audio rolled out what it described as its “compact” loudspeaker at the Los Angeles Audio Show.

Calling the new model small, however is kind of like describing a Mercedes-Benz C-Class sedan as “entry level.” Even with that car, you’re still getting plenty of luxury. 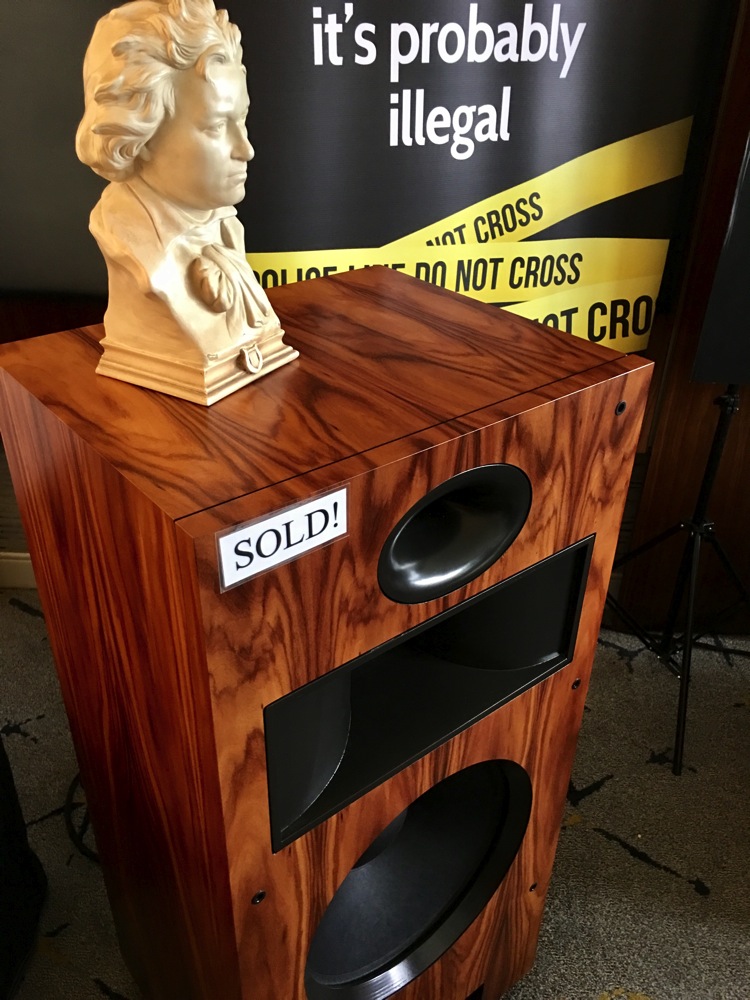 So, with the Rival, “compact” is relative. Yes, it’s somewhat smaller than the company’s other products. Still, the people at Volti haven’t completely lost their minds and tried to go after the computer-desk market.

At 41.5x19x16 inches and 125 pounds each, the Rival isn’t something you’re going to wedge into your bookshelf next to your John Grisham collection. You wouldn’t want to hide this speaker anyway, as the Rival has the same handsome styling and fine woodwork as its bigger siblings.

The Rival is a three-way design that boasts a sensitivity of 100 db. Only a handful of watts are needed to power the speaker to reasonable volume levels, according to Volti.

Its driver compliment of a ported 15-inch woofer, 2-inch compression midrange and 1-inch horn-loaded tweeter produce a frequency response of 32Hz to 20Khz.

The speaker comes with birch trim as standard. The drivers are visible, with grills an extra-cost option. A number of wood veneers also are offered for a fee, as are upgrades for the feet/plinth.

You even can order your Rivals with a horizontal layout, or outfit the midrange and tweeter with resistors in an L-pad configuration to adjust the output for your room and taste.

All these options make the speakers extraordinarily customizable.

To what degree, I wondered, would the Rival be able to present those same strengths?

In LA, I auditioned the new speaker on a system that also included a front end built around equipment from Perla Audio, including its Signature 50 integrated amp ($9,500 USD), Motif phono stage ($5,500 USD) and Composure DAC ($3,900 USD).

I wound up staying for a while, as this room not only was making good sound, it was playing some of my favorite musicians.

The first cut I heard was Muddy Waters’ “Mannish Boy.” Specifically, it was the version he recorded for his 1977 album Hard Again.

Water’s voice sounded raw and powerful, while Pinetop Perkins’ piano and James Cotton’s harp were presented with both detail and energy. (This is the classic album produced by Johnny Winter, who’s also credited with “guitar and miscellaneous screaming.”)

Next up was Lou Reed’s “Walk on the Wild Side.” Lou’s talk-sing vocal was clear and tactile, while the iconic female back-up singers were very distinct in the mix. In addition, the Rival’s large woofer allowed me to follow both parts of Herbie Flowers’ two overdubbed bass lines.

Finally, I asked to hear one of my cuts, Bob Dylan’s “Jokerman” from Infidels, the 1983 album that returned him to secular music.

The rhythm parts on this LP, played by reggae legends Sly Dunbar and Robbie Shakespeare, often sound somewhat muffled. Through the Rivals though, Dunbar’s snare had a more authoritative whack and Shakespeare’s bass was deep and tuneful.

Overall, judging from memory, I would say the larger Vittora ($25,750/pair USD) offers a bit more weight, dynamics and detail – essentially a little extra of everything. But for less than one-third the price, Volti’s new “compact” model, well, rivals its older brother. Well worth hearing.

If you have some time to spare, go visit Sonner Audio’s Gunawan Surya at a high-end audio show armed with a modicum of music knowledge. It’ll be a highlight of your show. Every time I […]

Igor Kivritsky wanted to make a difference with the Vancouver Audio Festival, and bring some of the expertise that the staff at the Hifi Centre had to the uninitiated of high fidelity. The goal was […]