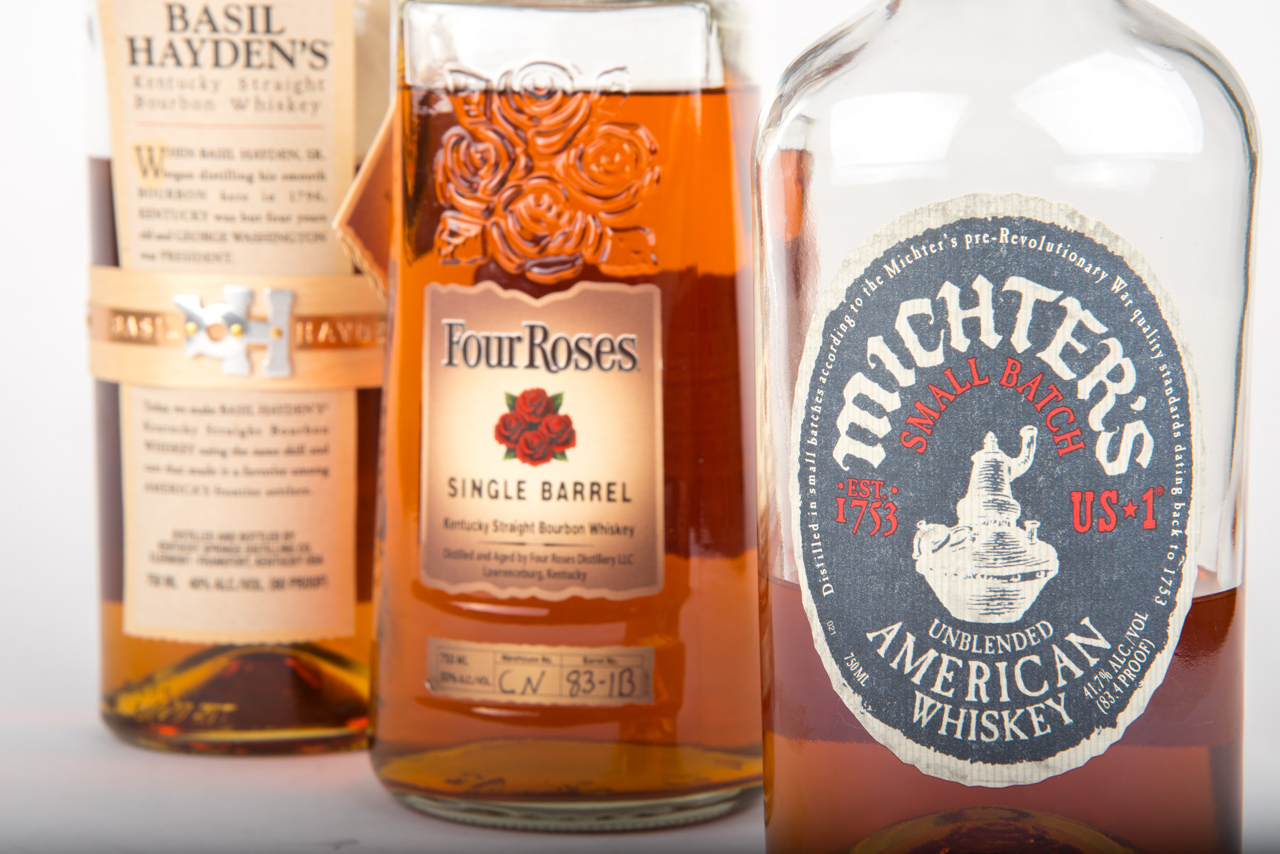 This is a tale of three whiskeys. All damn good whiskeys in their own right, mind you, but this trifecta happens to land very close to each other in price as well as origin (as do most American bourbons). Basil Hayden’s, Four Roses Single Barrel and Michter’s US*1 Unblended American Whiskey should all hit around the $40 price point at your local grocers, give or take a few dollars.

Both Basil Hayden’s and Michter’s rein in at 80 proof, while the Four Roses has about 10% more alcohol per volume. So if you are looking for the quickest way to drown your sorrows you can stop reading now, cause the Single Barrel is your choice. For the rest of us, please read on. None of the bottles were retrieved from an old collection, they are new and “as is” from the store shelf as you pick them up currently.

Michter’s as a whiskey brand has been around for quite a while, with the distillery holding the rights having gone through name several changes over the years including Shenk’s and Bomberger’s. The modern-day Michter’s name actually comes from the combination of letters from owner Lou Forman son’s – Michael and Peter. The Michter’s brand was recently resurrected by Joe Magliocco after the original company filed for bankruptcy in 1989. In 2011 Magliocco jumpstarted the distillery back to life with a new facility and has expanded the offerings to what we currently see today.

Michter’s “American Whiskey” is not referred to as a bourbon due to its creation in barrels that have been previously used. In order to be called a true bourbon, a whiskey must be aged in a new charred white American oak barrel, whereas this Michter’s variant uses barrels that have been occupied by other bourbons beforehand. The “unblended” distinction on the label refers to the lack of grain neutral spirits in the recipe. The lineup of products from Michter’s actually all land around the $40 range and do include a letter-of-the-law Bourbon ($45), a Straight Rye ($40) and Sour Mash ($55). I also had a bottle of the Bourbon on hand, but it proved to have a much sweeter profile than the American Whiskey, so the recommendation and the subject of this comparison will be the AW, which is more agreeable for this exercise. 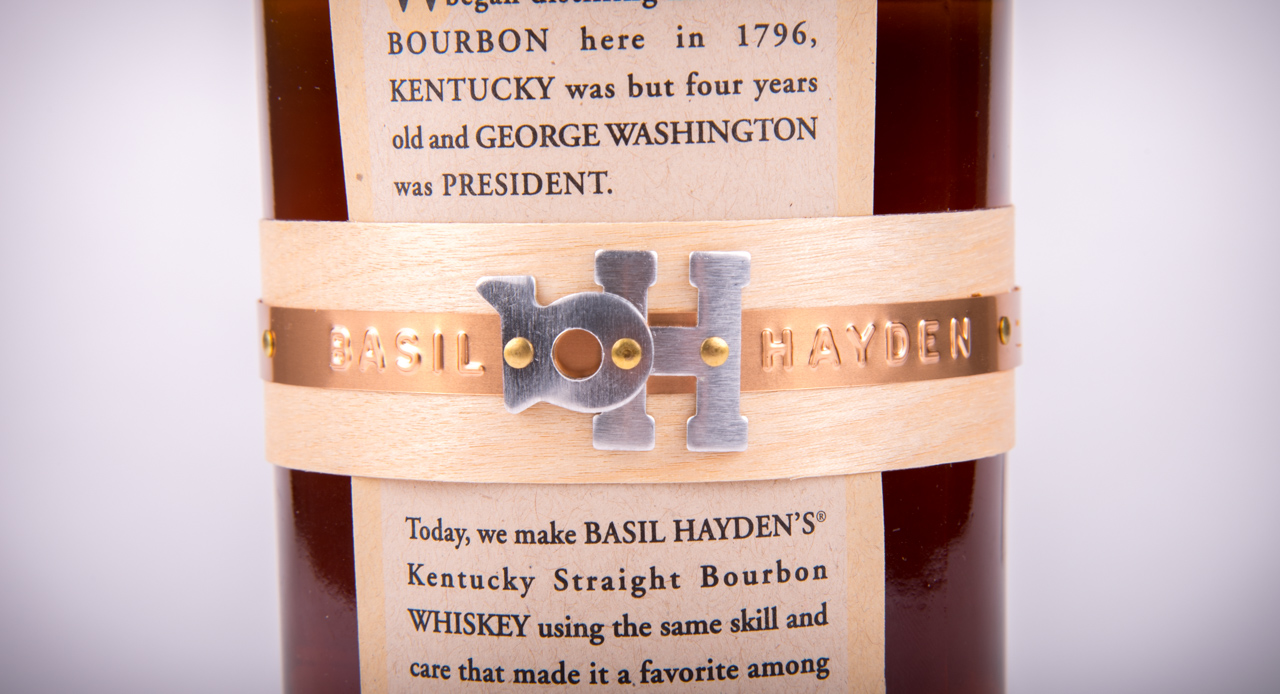 The aroma of Michter’s American Whiskey is woodsy and clean. There are also notes that are reminiscent of the better parts of that sensation you get when you open an envelope. In the mouth, it’s full-bodied and bold with hints of leather. The finish is big, with plenty of spice and a pleasurable flavor that tends to linger a bit.

Four Roses is now owned by the Japan-based Kirin company, having traded hands a few times with a fairly long stint with Seagram’s starting in 1943. Four Roses Single Barrel sits atop a three-tier product line as the flagship offering. Both the “Small Batch” ($30) and “Bourbon”($20) flavors are bottled in unique container shapes, with the Single Barrel standing out with an interesting rectangular pyramid contour.

The Four Roses recipe for the single barrel is referred to as “OBSV” and involves a mash bill of 60% corn, 35% malted rye and 5% malted barley, which is generally more rye than a typical bourbon build (which needs to be at least 51% corn to be called bourbon).

Four Roses Single Barrel has sharpest, and most intense aroma on the nose. The strongest sense of vanilla came off FRSB fumes. There were also hints of honey and subtle sugar undertones. On the palate it was the heaviest beginning, but ended with a clean finish. There were hints of caramel and toasted almonds, that lasted with a back-of-the-mouth sparkle after a few sips.

Basil Hayden’s is part of the Jim Beam Small Batch collection, produced in the US by Beam Suntory headquartered in Deerfield, IL. Suntory holdings purchased Beam, Inc in 2014, but in recent years was also able to gain some serious attention in the US for its Japanese spirits marketed under the Suntory brand. Basil Hayden’s bourbon was introduced 1992 and sits alongside Knob Creek, Booker’s and Bakers in the JB lineup. Basil Hayden’s is also considered a high-rye bourbon (63% Corn, 27% Rye, 10% Malted Barley) and has been historically associated with Jim Beam’s Old Grand-Dad whiskey, named after Basil Hayden Sr. in the 1880’s. There was an 8-year age statement on the bottle up until 2014, but as recent trends have shown, ages on bottles start disappearing as soon as production can no longer meet up with demand.

Basil Hayden’s has a light, bright smell that was the least potent off the starting block. One could find the most predominant sense of fruit there, along with the better parts of the aroma of paste. The mouth feel of the Basil was the most honey, also the most smooth. After a few samples it was easy to drink with little burn feeling. There was a slow, but subtle decay to the flavors whereas the other two whiskies made more of a splash upon exit.

In a way the three whiskeys here represent three different approaches to the pastime of drinking. Michter’s and Four Roses are more of a full-bodied take on flavor, with Michter’s edging out the Single Barrel in terms of overall smoothness. Both are spicy in their own right, while the Basil Hayden’s being the least pronounced, despite its high-rye mashbill. The Basil is by far the most easy to drink, but shouldn’t be overlooked as a go-to when out on the town as its tangible takedown on the tongue is still very pleasant and verbose. The two remaining entrants do feel slightly superior in their complexity, but sometimes a simple solution is all that is needed to the job done. All are far above the complement of a mixer, so feel free to downgrade yourself if you are heading for the likes of an Old Fashioned or otherwise. If one bourbon had to be chosen for a desert island stay, most signs point to the Michter’s, holding on to the Four Roses for a holiday fling or late night tryst. All are good for a night out on the town, given a limited selection at bar or nightclub, the Basil Hayden’s is still a good one to keep in reach.

Those looking for a solid value proposition will find one across the board with these options. If you can find a $40 pricetag for each bottle in your state, then the cost per ounce is $1.57. This would land you at a mere $4.72 for a three-finger pour within the comfort of your own house. Of course prices will be much higher at your local watering hole, but chances are you already have your mainstays locked and loaded for that scenario. Compared to the field of play in the market, the overall rating for each whiskey here still hits high. Sure, there are probably a few outliers on both sides better and worse, but these options put some scope on the situation. Even the Basil Hayden’s – which feels like the lightest of the three – proved to contain more body and weight than the threadbare taste of Chicago-based Koval Bourbon. There was a hearty and unanimous preference for the Four Roses by comparison at a tasting party that we attended last year. That same party produced a similar preference for Michter’s American Whiskey over the aforementioned Bourbon variant from the same distiller, citing much the same permeating sweetness as a contributing factor for the distinction. But the presence of consensuses doesn’t necessarily dictate the presence of truth. Those attracted to a sweeter profile may well find a home there, but the three chosen for this exercise tended to have more equal footing in the game when pressed up against each other. In any case, I’d still give Koval a few year’s to catch up before another go ‘round. 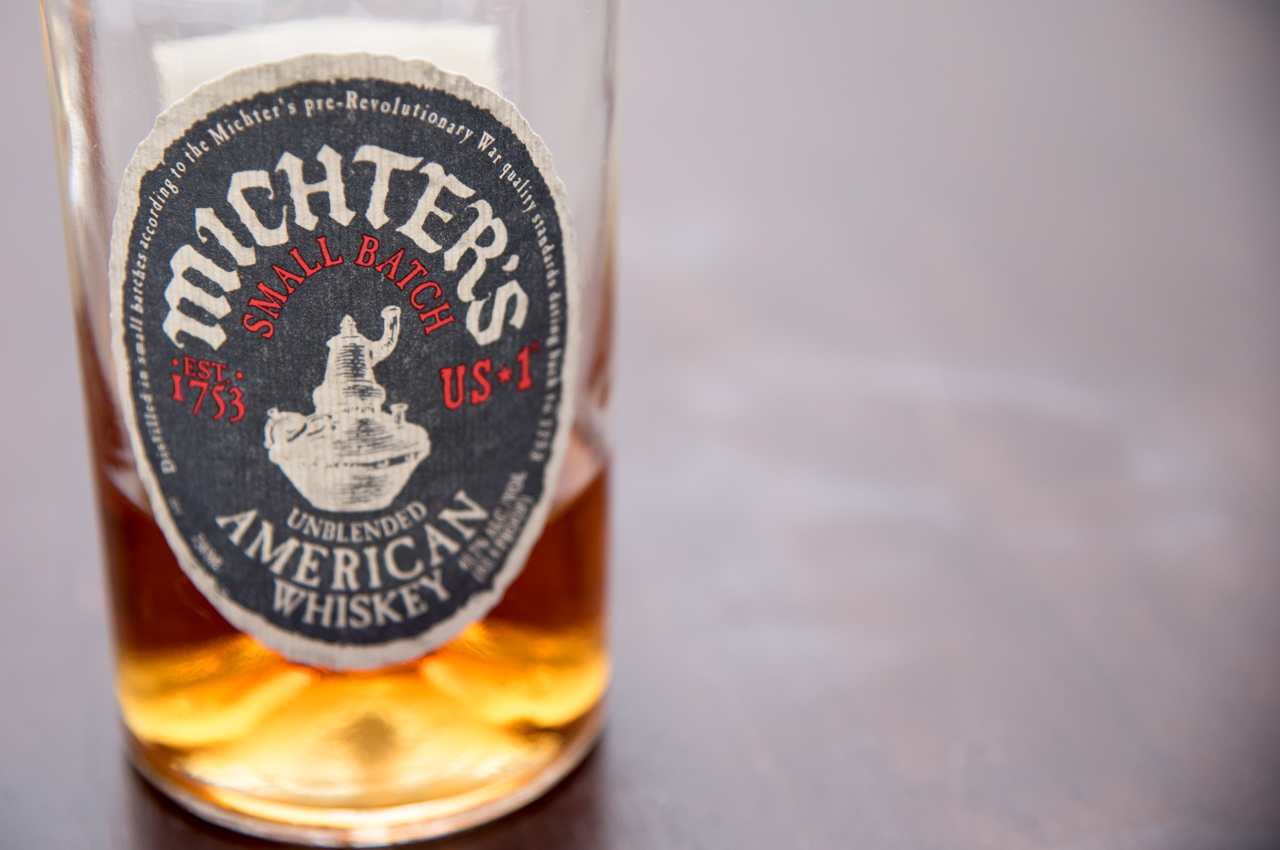 Those in dire need of a rating system might find some solace in a 3.5/5 for the Michter’s US*1 Unblended American Whiskey, 3/5 and the Four Roses Single Barrel and 2.5/5 for the Basil Hayden’s. Again, all good tastes in their own right and befitting of a single bottle purchase from any onlooker to the group. But given there are so many good options on the market to try, be a shame to limit oneself to a single effort at the $40 mark. So perhaps no case purchases are to be found here unless you are throwing one hell of a party. 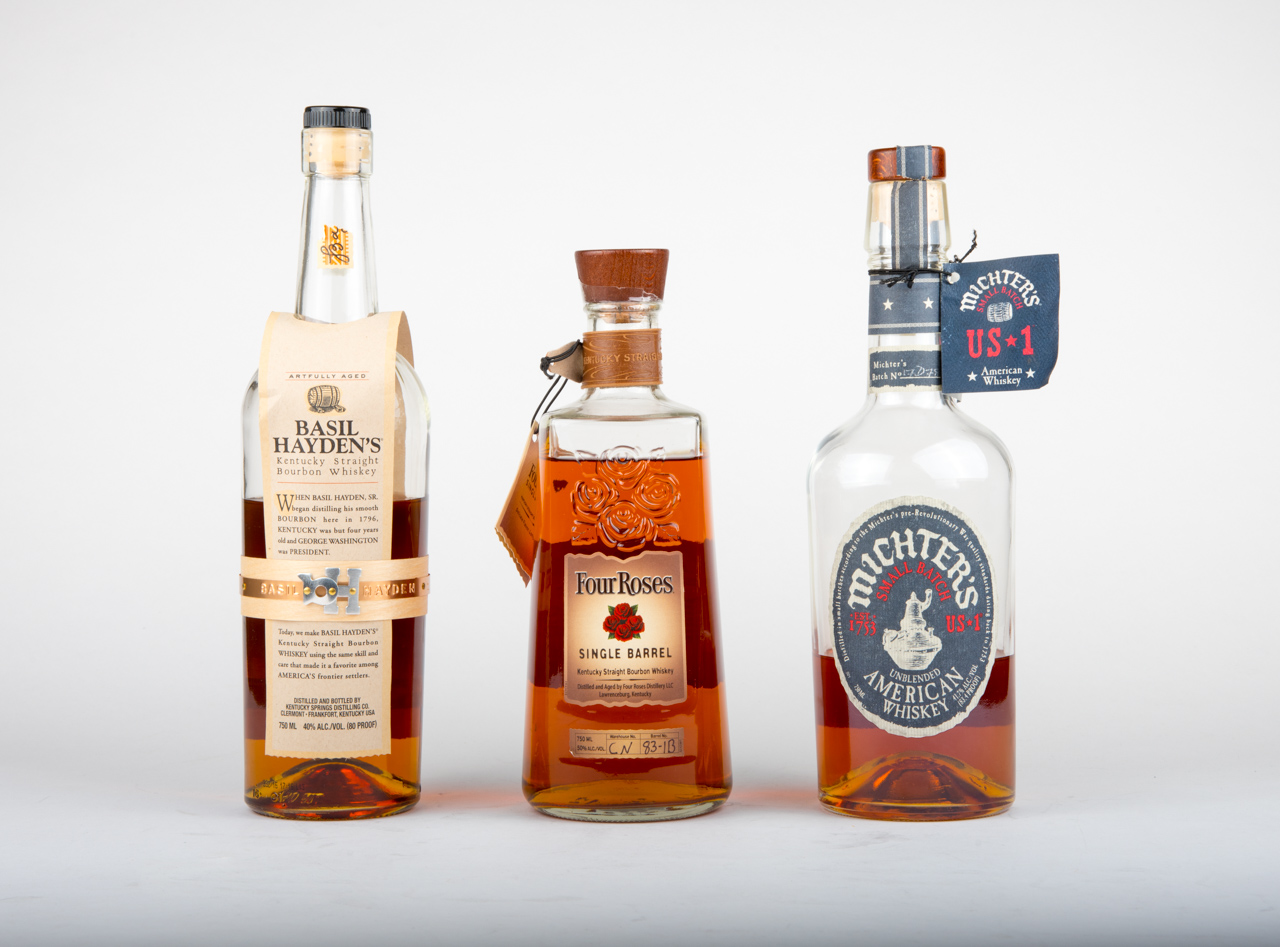 [Editor’s note: Welcome to the Part-Time Audiophile Buyers Guide for Summer 2021! These are the best audio accessories and assorted “tweaks” that we, the PTA team, have used.] The Best Vinyl Accessories AnalogMagik All In […]

And now for something completely different. I have to confess something. I love wine. I drink wine regularly, if not in volume (at least, not since the kids came along). My wife and I used […]