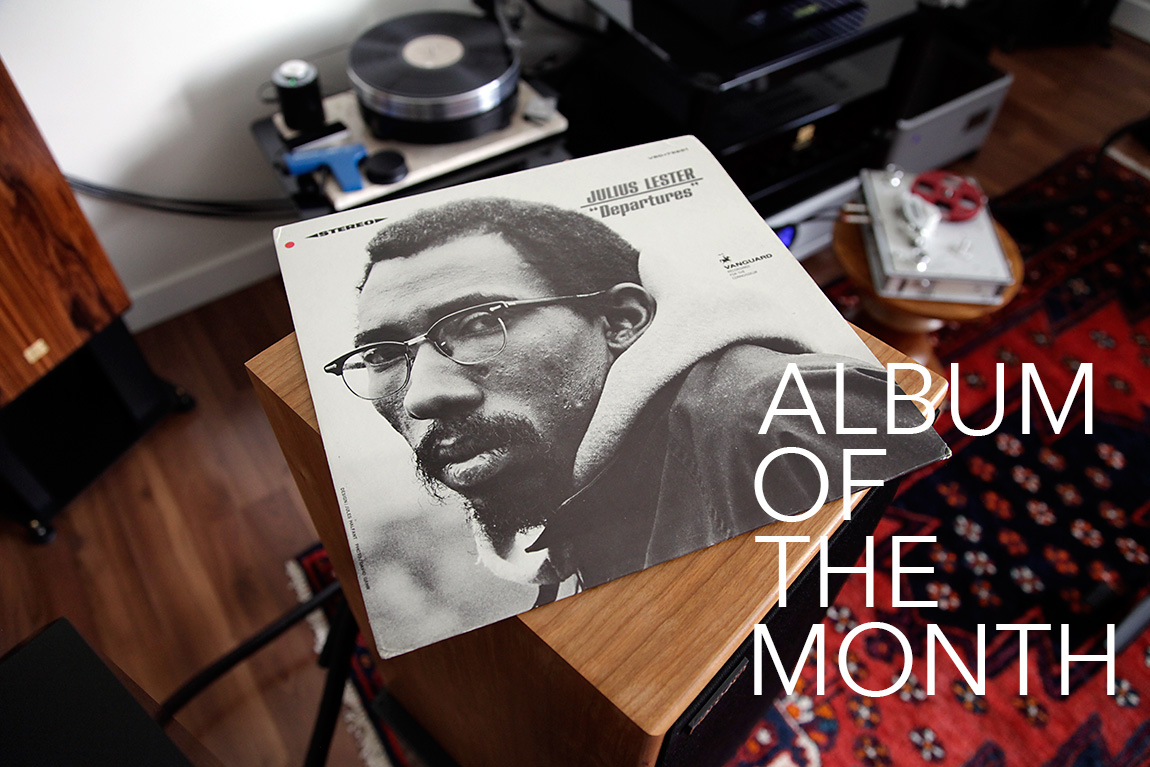 This is the second in a monthly series of album reviews I will be doing for DVL Audio here in Canada. I’ll be heading out to a local record store in Vancouver, digging through the bins, and coming up with an intriguing LP to discuss here on Part-Time Audiophile. I’ll never go out with something in mind beforehand, and there is no criteria for whether it’s a new album, an old album, an out-of-print LP, electronic, classical, jazz, punk – whatever – it just has to sound good to me.

I’ll come up with as much of the backstory as I can research, and include a small audio sample for listening. I hope you enjoy reading the reviews as much as I enjoy doing them.

It was the album cover that got me interested in this LP. I was flipping through the stacks at Redcat Records on Main Street in Vancouver, B.C. when I came across the man sporting the eyeglasses, hoodie, and spring coat staring out at me from the black, and white photograph. He would have been just as timelessly hip now as he was in 1967 when the this record was cut. Julius Lester “Departures”  was written in italics next to the picture, and it also informed me this was the stereo version – not the mono – and that it was a Vanguard Recordings For The Connoisseur. Giddy up. I wanted to know more.

Wikipedia told me that Lester came into this world on January 27, 1939 in St. Louis, Missouri which means he was born in the Year of the Tiger according to the Chinese zodiac, and is an Aquarius for you traditional horoscope people.  He is a photographer, folk singer, and has received such literary honours as the Coretta Scott King Award, the National Book Award, and the New York Times Outstanding Book Award for some of his almost four dozen published books. Not limited to long form, he has 200+ essays, book and film reviews to his name that appeared in such hallowed journals as The New York Times Book Review, The Boston Globe, the Village Voice, and the The New Republic… so it would seem Lester has something to say to the world in more than one medium.

The main focus of my discourse on Lester here of course is his musical leanings. He put out two albums, Julius Lester in 1966, and the one I will review: Departures, in 1967. Both were recorded on the Vanguard Recordings label which I found out via Discogs was started in 1949 by Seymour, and Maynard Solomon in New York City with $10,000 in seed money loaned to them by their father. Vanguard went on to become one of America’s top independent labels repping such artists as Joan Baez, Buffy St. Marie, Ian & Sylvia Tyson, and Buddy Guy to name but a few.

The sleeve was in Very Good condition, and the LP was a Mint-minus. I gave the album a run through my Okki-Nokki record cleaning machine, and threw it on the ‘table to hear just what Lester had to say that he hadn’t on the dark, rather morbid back-jacket musings of this, his second, and final vinyl release. The first track is No Count Man, and here Lester calls bullshit on the capitalist system of birth/school/work/death with a marriage, car, house, and kids thrown in for good measure. This whole album is strictly a man, and his guitar, and as such offers up an acoustic treat for those fans of sparse arrangements in the singer/songwriter vein. The sound stage on these recordings is narrow, and deep, which on the system I used to review to it on (specs at end of post), made for compelling listening sessions. It definitely has an old ’40s recorded-at-the-side-of-the-road vibe that many of the initial black, southern gospel albums were cut with due to the nature of the equipment producers had at their disposal in those times (recording to two-track with one mic out of the trunk of their car).

Lester’s plaintive wailing on the track Misery Blues pours out with only the slightest reference to the recorded space. For the most part he, and his guitar are playing in eerie sonic isolation albeit with the tone, timbre, and resonance of the guitar’s body having realistic weight, and size in its presentation. He likes to pepper what would come across to a casual listener as a traditional gospel song with derisive swipes on products by white companies being marketed to black consumers such as Aunt Jemima syrup, and Uncle Ben’s Rice. He also sings on topics of racial harmony with lines like “I don’t want to integrate, I just want to be left alone.”

This is a challenging album to listen to with lyrical focus, as Lester consistently touches on many of the divisive issues that kept blacks, and whites so far apart politically in the 1960s. The track “Midnight Blues” hears Lester asking “Jesus, why don’t you come down off your cross… If I get killed down South, I want a white boy by my side, because I don’t want anybody saying ‘Just another n*gger’ when I die.” So while it isn’t traditional blues in the most literal sense, his guitar work – while simple, and straightforward – is so compellingly, and emotionally charged that it inspires foot tapping, and head bobbing despite the sometimes morbid lyrical content. A recommend listen for the hardcore blues fan, but not for everyone.

How to build Listening Room Synergy: Curating a system that sings

System synergy — components mating so well that the result exceeds the sum of their parts — is one of the most elusive goals in audio. You know it when you hear it. You just […]

If I were to sum up my experience of the Acora SRB it would be that it has reminded me of the Joy of the Novice. Can you remember the first time you had an […]