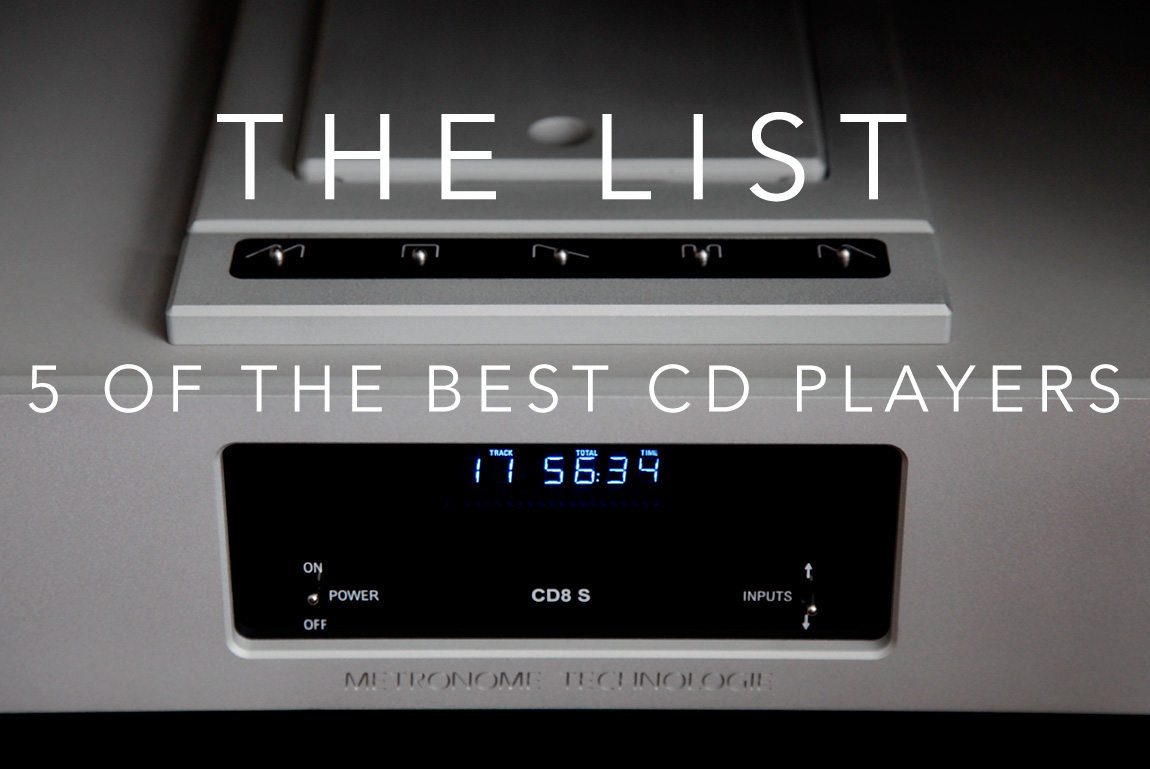 Welcome to something new we’re going to try here on PTA thanks to our friend Wynn Wong of Wynn Audio in Richmond Hill, Ontario. I’m going to be curating a new list every month featuring different categories of gear that I think you – our readers – have to hear under any circumstances you can arrange: beg, borrow, steal, drive for hours, hop a train, take a plane… you get what I’m saying. Price will not be a factor, with individual pieces on each list reflecting a spectrum of what I feel is the best. This new feature will be called… The List, and it will be my attempt to share some of the gear opinions I’ve managed to accrue spending as much time as I do (apologies to my family, and friends) with high fidelity equipment. Items featured will include at least one piece of gear that I’ve personally spent time with, so it’s not some random list put together without context. I hope you enjoy reading them as much as I enjoy putting them together.

Five of the best CD Players on the Planet. Hyperbole? Maybe. But that doesn’t make it untrue, besides everybody loves lists. I’m going to start by saying that the rumours of the death of CD have been greatly exaggerated. I know, I know… you’ve just read that, and now you’re saying “what is he going on about?” Right? “Everyone is streaming high-res computer audio now Rafe – c’mon, get with it mate.” While the negative impact on the popularity of shiny sliver discs via online streaming services such as Tidal, Spotify, and Deezer or closer to home on network attached servers (NAS), cannot be overstated, that doesn’t mean they sound better. There is certainly the incontrovertible convenience to having millions of songs at your fingertips that trumps every other format of audio playback, but that convenience hasn’t necessarily translated to better sound. In fact I’ve heard very few high-end DAC/server combinations streaming at 16/44, 24/384, DSD, DXD, etc. that have improved on Redbook.

Why is that? To my ears over the last several months, there’s something in the timing – and just ask MQA about the importance of timing – to listening to music being played back by a CD transport compared to computer-based audio. Is it the way various DACs, and streaming hardware re-assemble the data in their buffer stages when compared to a compact disc being read? I’m not sure. And, many will be quick to point out that there’s a a dozen reasons why this makes perfect sense, and just as many why it doesn’t. Digital is digital some will say. I have to respectfully disagree, and say that’s not the case. But, that’s an in-depth article for another time.

I almost didn’t want to to make this first list on CD players because I wanted to buy myself some more time. You see, since I’ve had two of the players that are featured in this month’s clutch of kit at my place (Metronome CD8 S, and Audio Note CD 4.1x) I’ve been having an amazing time CD-hunting through the stacks at several of my local record stores. Barely anyone is flipping through CDs these days – and let me tell you there are more fantastic, hard-to-find, out-of-print used CDs than I’ve ever laid eyes on at local shops – everyone is too busy jostling each other in the vinyl section hoping to score a turquoise-lettered Zeppelin first pressing to be bothered with the lowly, and oh-so-uncool CD.

But the sound of vinyl is so superior to CD you say. Is it? I’m here to tell you, I’m a bit hard pressed to spin LPs these days when I have two CD players the calibre of the Metronome, and Audio Note in the house. I still get to rummage through pile of cases – much like flipping through my LP collection – and I still get to take out a disc (albeit smaller), and place it on the player. I also get to go through liner notes with my CDs. But the very best thing of all (besides the imaging, texture, and timbral colours of sound that these two players exude) is the fact that almost every CD I’ve been buying up (10-15 at a time when I’m out) costs $2 to $4.

It’s no secret that most people are used to dropping on average $25 (here in Canada) for an LP, so $2 for a mint-condition CD is excellent value in my books – especially when you take into account how many of today’s re-issued LPs from questionable labels are sourced from: you guessed it, CD. I usually spend much more than $25 for some rare pressing I want, and when I go crate digging for vinyl these days I’m lucky to find anything under $10 since Discogs became the app de rigueur for record store owners. Good bye to those $5 scores in the new arrivals bin because the clerks didn’t know what they had… ahhhh, thanks Internet. But not so for CDs. No, they are piled up like old musty magazines, and quickly stickered with shockingly low prices because, well, they’re just CDs, and as I said – who wants those? Well, I certainly do, and so should you. The CD is back big time for me, and here’s an alphabetical list of five of what I think are some of the best CD players in the world. 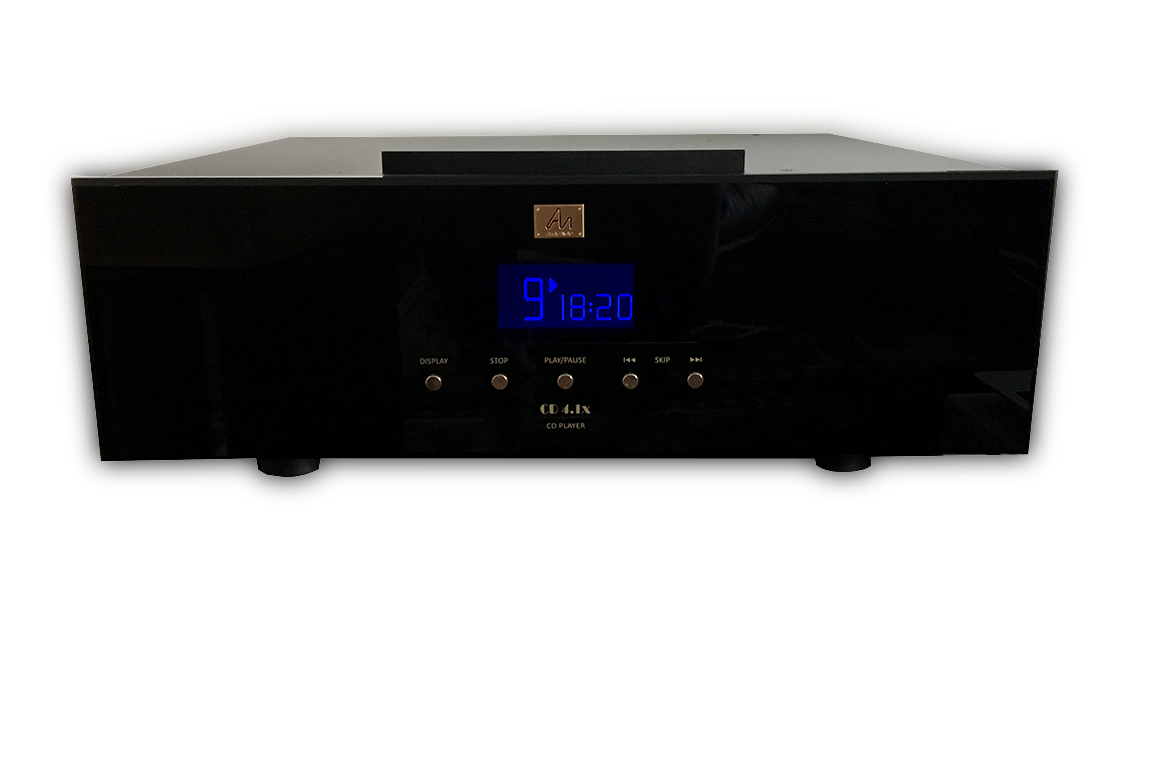 Built by hand in a small factory in Hove, outside of the seaside holiday town of Brighton in the UK, the CD-4.1x is the company’s flagship one-box transport/DAC. Audio Note uses the Analog Devices AD1865N chipset with no oversampling, and no digital or analog filtering, and a “clock-locked direct coupling between the transport, and DAC.” Audio Note focuses heavily on power supplies (separate supplies/transformers for transport. DAC, and even the digital-readout screen), and the circuit path with high-quality Cerafine caps, Tantalum resistors, and their own copper-in-foil capacitors throughout, along with Audio Note AN-Vx silver interconnect cable used internally. The analog output stage utilizes a pair of 6H23N dual-triode tubes to get the most out of the transport, which is the broadcast-market specified Philips CD-Pro2LF, and features a magnetic-style clamp. Think assured, powerful, colourful, and dynamic sounding without sacrificing air, detail or timbral texture. One pair of analog RCA outputs, and S/PDIF, AES/EBU. MSRP is $12,000 USD/$14,960 CAN. Look for an upcoming review. 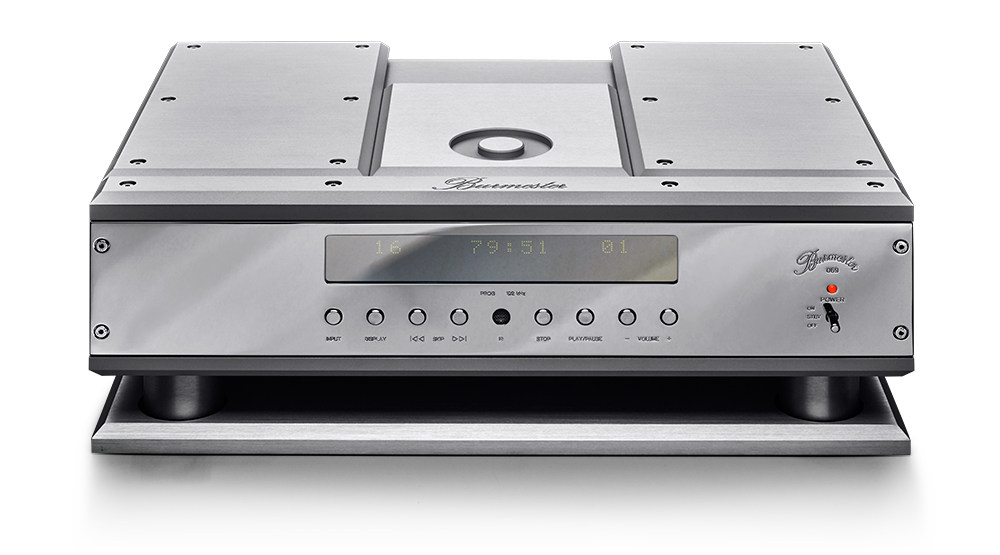 Burmester is a German company which is ruthless in their mission of music over all else, and believes in designing to ensure just that. The company’s flagship 069 CD transport/DAC is an opera of over-engineering, and its massive metal chassis weighs in at a hefty 55 lbs, and features a belt-drive which Burmester claims offers complete decoupling of the pickup-system. Inputs include two RCA, one TOSlink, and output choices are XLR, RCA, and TOSlink. Upsampling is 24/96kHz, but is switchable to 24/192kHz. The 069 utilizes “powerful toroidal-core transformers, which rigorously separate the currents supplied to the digital, and analog sections.” The more I explore the world of CD players, the more it becomes obvious that the companies dedicating their resources to Redbook playback seem to use their considerable expertise in the field by focusing on power supplies. The 069 is available either in a one-box configuration, or two-box with a separate, dedicated power supply. I’ve heard the 069 in an all-Burmester system, and was deeply impressed with it’s bass-control, acoustic-instrument sophistication, timing accuracy, and incredibly low noise floor. MSRP starting at $75,000 USD/$93,500 CAN. 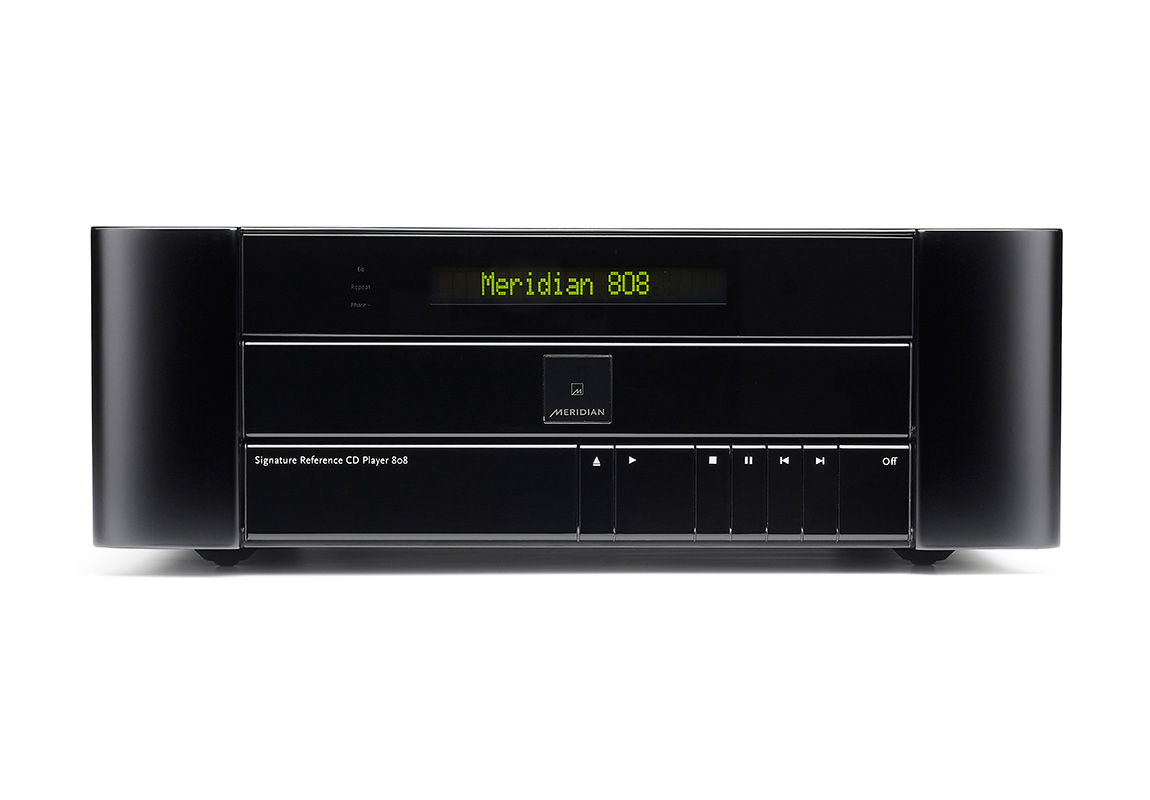 Another British company, Meridian has been a workhouse on the digital front for decades with a number of key technological designs that set the bar for many years on 16/44 playback, with the latest iteration of the company’s transport/DAC up to Version 6.  With the most inputs of any player on The List, the Meridian 808V6 sports six RCA inputs, two coaxial, two TOSlink, an RJ45 Network jack, and USB. Outputs include a single pair of RCA, XLR, coaxial, and AES/EBU. It has twinned 24/92kHz Delta-Sigma convertors onboard operating at a 4x CD-sample rate (176.4kHz), and while the 808V6 can play Redbook via its transport, it is MQA hardware-certified for decoding via the digital inputs, and DSD via coaxial, and USB. Other features include “an enhanced DSP chip that offers lip-sync control, and MQA and DSD playback (DoP), the latest linear power supply, and a brand new master clock.” A behemoth of a box, I’ve heard it being played through an all-Meridian system a number of times at shows in the last couple years, and it always astounds me with its musical fluidity, uncanny grasp of human voice reproduction, and large, spacious sound stage. MSRP is $14,750 USD/$18,375 CAN. 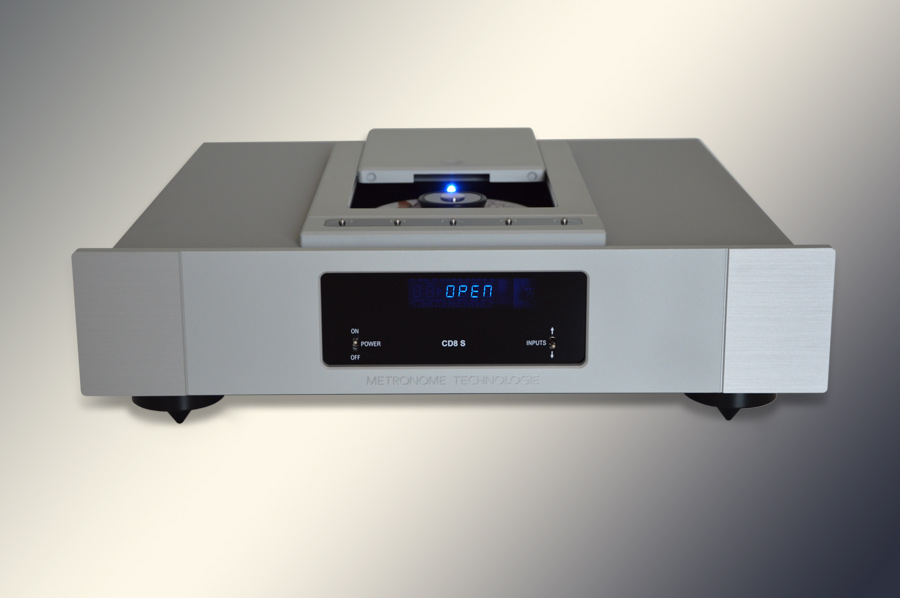 This French company came on my radar only in the past few months as I kept hearing the Metronome CD8 S mentioned when I asked around about players that I should try to arrange a review of. Metronome’s approach with this transport/DAC is similar to a number of others in that while the transport itself is Redbook-only, it has inputs on a separate board (USB, S/PDIF) that allow the box’s AKM AK4490EQ 32-bit chipset to handle multiple digital formats: PCM decoding up to 768kHz, and also… DSD. A very nice option for those looking to have a one-box solution for both 16/44 discs, and computer-audio playback convenience. The cast, and machined-metal casework is very robust, and like the AN 4.1x mentioned previously has a velvety-smooth top-access sliding door (although here it reveals the Philips CDM12 Pro2 transport mechanism). One of the very cool human-design details which I noticed immediately (and was very grateful at night for) is the inclusion of a small blue LED light that turns on inside the CD bay when the door is slid open. Hallmarks of the CD8 S are it’s wonderful timbral colour, and hyper-realistic portrayal of stringed instruments. It offers tight, deep, and musical bass with everything from electronic dance music to cello solos. Piano, and percussion are reproduced with delicate spectral decay on trailing edges of notes. MSRP listed as $10,000 USD/$12,470 CAN. Look for an upcoming review. 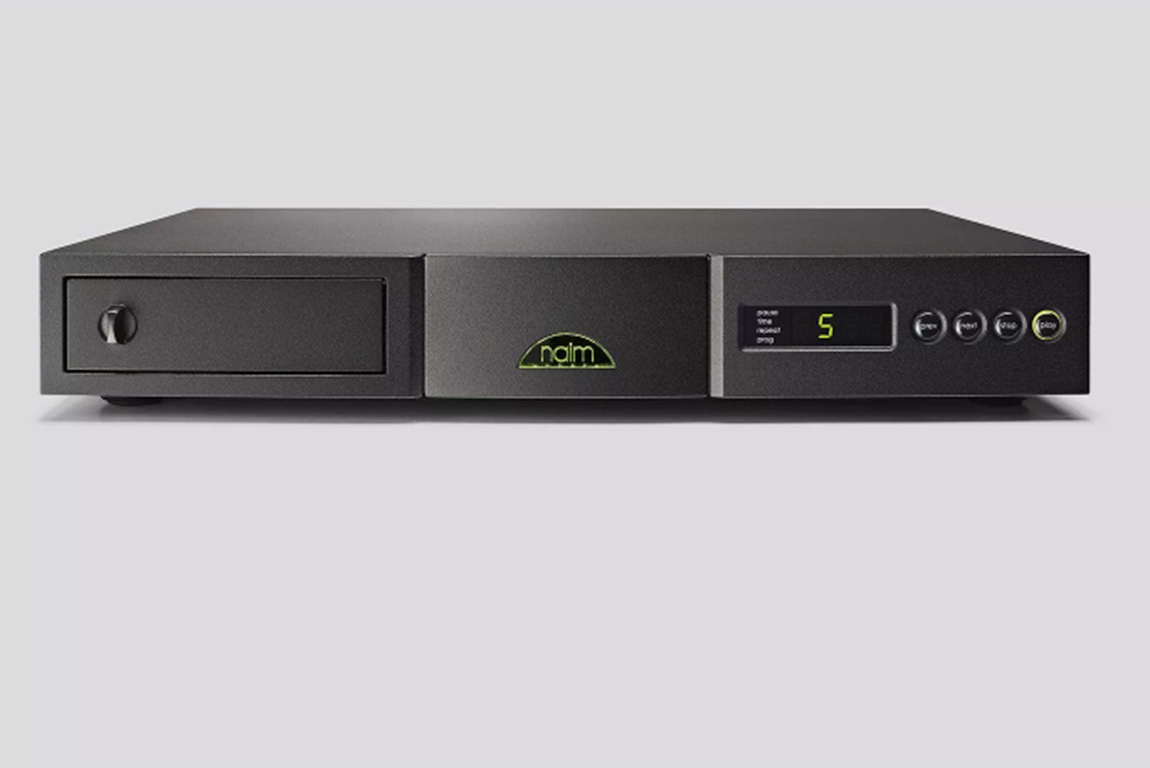 The Naim CD5Si has been around in its same, basic guise for many years now, and like all Naim products is built like a tank. It features a very unique, manual-operating swing-out drawer to load the transport, and unlike every other transport/DAC listed today, lacks any digital output. This is a single-minded Redbook player designed to do one thing, and do it as well as Naim could design it to do at a price point. The “S” designation added to the venerable player translates to an upgraded D/A circuit that Naim claims has improved the stability of the digital clock, bettered the analog filtering, and on the mechanical side of things added a more robust transport. I’ve always admired the clean, slate-grey casework of Naim designs, and the ability to add separate power supplies as you move up the product line. The CD5 was one of the first CD players I heard when I started to get into high fidelity several years ago, and I was captivated by the intense colour, and musicality to the sound without ever perceiving sacrifice in any aspect of the broad spectrum of tonal reproduction. Texture on drum skins, accurate scale, and size to instruments was impressive, and while it is not the last word in upper-octave detail retrieval, for this price point, you’d be very hard pressed to find anything better in my opinion. MSRP $1,490 USD/$1,900 CAN.

Spinning Silver: Audio Note UK CDT-Two/II CD transports are passé. Boring. Irrelevant. So … yesterday. Now, if only someone would tell that to the 5,000+ shiny silver discs I have all over my house. Yes, […]

— by John Grandberg DACs are big business these days. If Scot directed all us contributors to cover one significant DAC release every month, we’d probably keep busy just from that alone – with no […]

The CEntrance table at Newport had two sweet surprises. The first was the Mini-M8. This is the new slimmed-down version of the best-selling headphone DAC/amp combo, the HiFi-M8, but this time there’s real (output) support […]