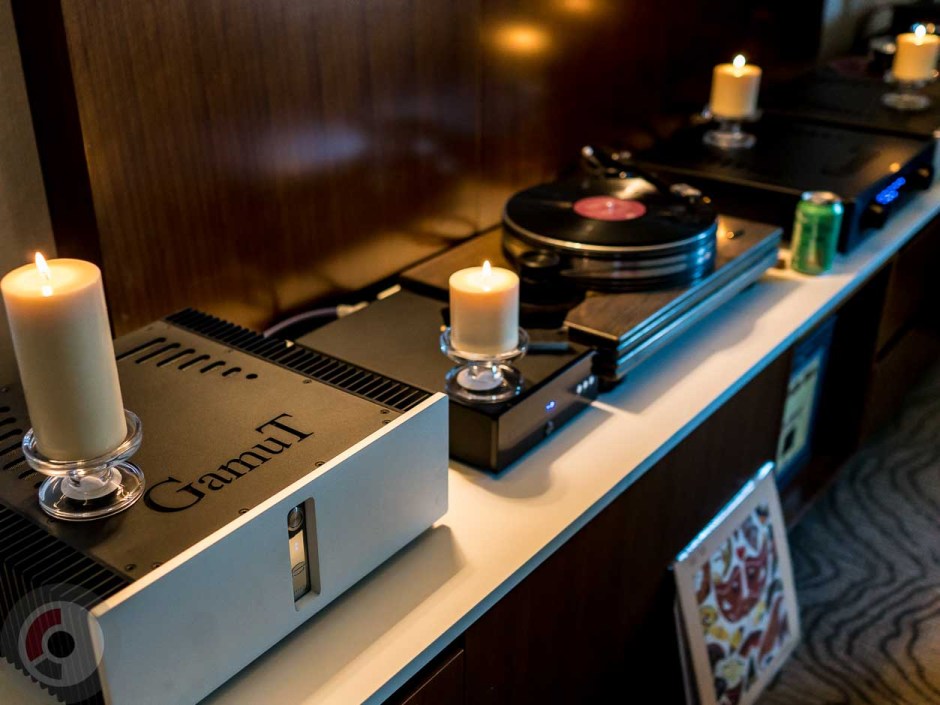 Some experiences defy expectation. Just like some choices. Like peas and carrots — why on earth do those go well together? And really, chocolate and peanut butter? Ugh. And a businessman with zero government experience for president — wait, sorry, we’re wandering off topic. I meant to say, gigantic Zodiac loudspeakers jammed into a modestly sized (and square!) hotel room. Who ever thought that would work? But unlike a few of the other improbably combos I mentioned, this room — stuffed with flagship loudspeakers from GamuT — did work. I’m still scratching my head at that one. Maybe a really big shoehorn? Dunno.

Size and scale were breathtaking, but the grace and ease of the music (when not played at life-threatening levels) completely belied the fact that the speakers were so flipping big. Yes, a bigger room would have revealed more, but as is, this was clearly one of the best sounding rooms at that show. Again. GamuT is on a roll.

Yes, there was analog tape on display. There’s a new/optional phono board or reel-to-reel tape pre available for the preamplifier, too, for those of you looking to jump way down the rabbit hole.

That Pear Audio turntable is really quite something — drive, an immersive midrange, and silky seductiveness are calling my name. I may have to get one of those in here for review. In fact, I’m going to go out on a (very sturdy) limb and say that everything Benno and Michael bring from GamuT is worthy of your attention. No, it’s not cheap. But yes, it is all excellent.

Oh, and a side note: it’s pronounced ‘gammit’, as in, rhymes with ‘dammit’. Now you know.

Clayton Shaw is a quiet man with a room-filling plan. His company, Spatial Audio, has made quite a splash crafting inexpensive, open-baffle, loudspeakers and using them to embarrass the living tar out of his colleagues […]

Vinnie Rossi was showing off his latest and greatest L2 Signature Preamplifiers and L2 Monoblocks, which could handle a slew Harbeth speakers (big and small) extraordinarily well. At Rocky Mountain Audio Fest the Harbeth 40.2 […]

A visit to one of Jeff Catalano’s ornigh Water Sound rooms is a bit like going out to a great restaurant with a friend who’s a connoisseur of gourmet cooking; he says, “Do you mind […]