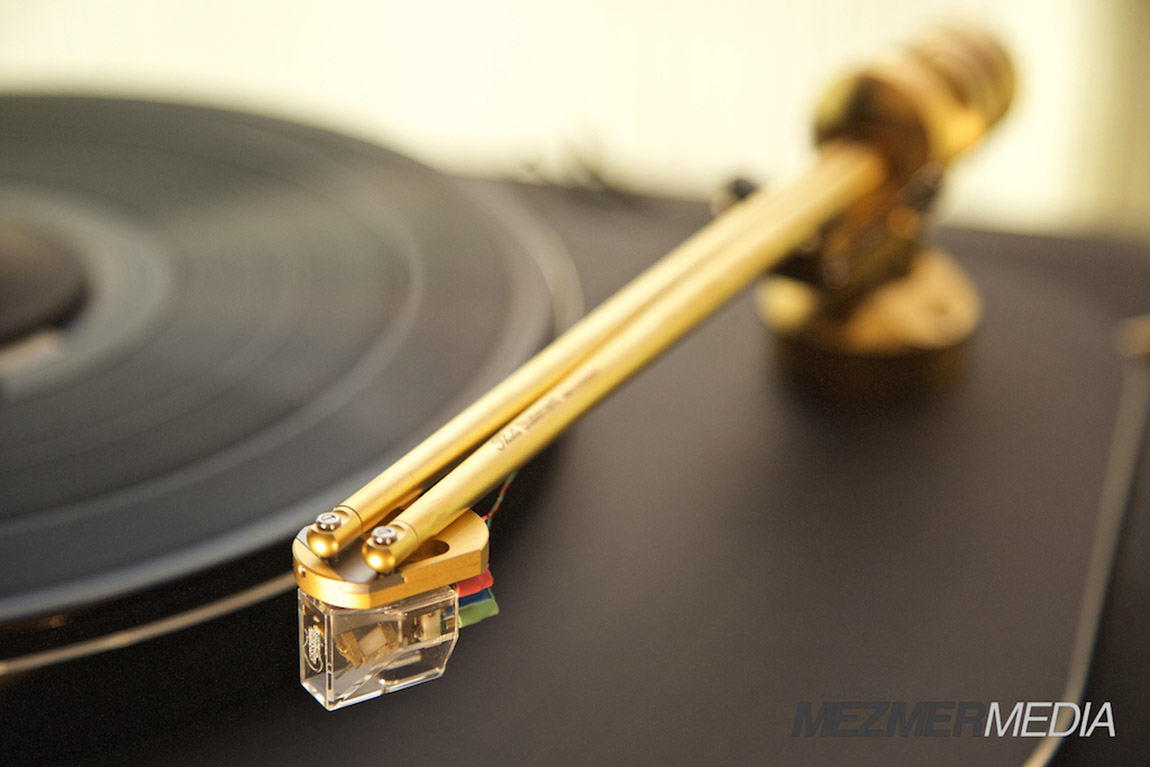 The Toronto Audio & Video Entertainment Show (TAVES),  which originally began at the King Edward Hotel in 2011, is by all account tremendously successful. Thanks to the efforts of Sauve Kajko (President, TAVES) and Simon Au (Vice-President, TAVES), Toronto has a firm position on the world map of high end audio as TAVES is currently the largest high-end audio show in Canada in size, number of exhibitors, as well as for attendees.  To accommodate the growth, the organizer had to change venues twice, which led them to the Sheraton Hotel and Conference Centre in Richmond Hill in 2016.

Popularity comes with a price and a hefty one, which translates into a significant increase in rental cost of the show venue. The Sheraton Hotel in Richmond Hill jacked up the price several folds, so for 2017, TAVES had to change venues once more and landed at the Toronto Congress Centre.  The Congress Centre is strategically located just five minutes from Toronto’s Pearson International Airport. The supposedly premier trade show facility proved to be a challenge for the show organizer as well for exhibitors.  The Congress Centre has more than one million square feet of event space, but they are mostly open areas with a limited number of exhibit rooms. Kajko, and Au had to assemble a team of workers to build temporary exhibit rooms for nearly half the exhibitors within a two-day period.  Adding to the difficulty was the uncooperative and hostile attitude of Toronto Congress Centre management which threatened to shut down the show, because they did not expect an audio show to have sound (Duh!).  In all my years of show coverage, the Congress Centre truly registered high on the level of bureaucracy, and red tape combined with an attitude of indifference which made things difficult for the exhibitors.

But to the credit of TAVES, they pulled it off and all that was witnessed by the attendees was the professionalism and attentiveness of the organizers, which made the show another success. Exhibitors, however, were not so happy with the venue. I would be surprised to see a repeat of the show at this venue in 2018, on the part of the organizer as well as exhibitors. 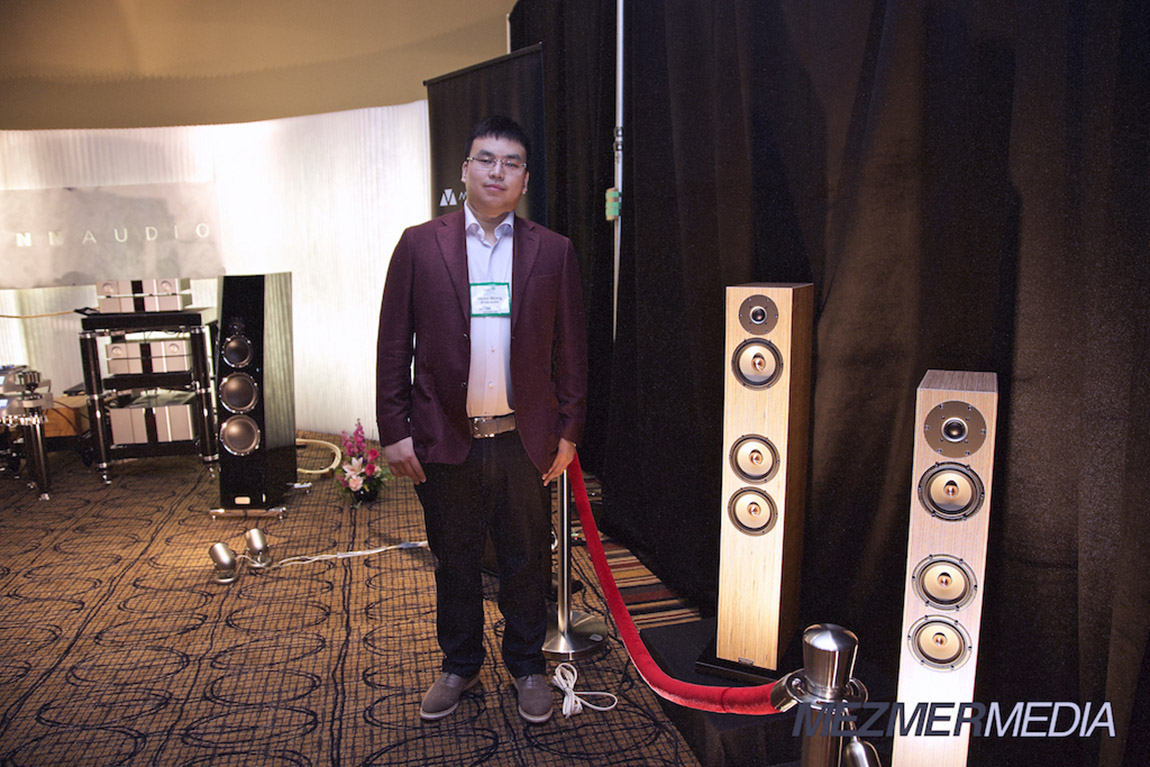 Once again, Wynn Wong of Wynn Audio spared no expenses and occupied one of the largest and the best rooms at TAVES. His exquisite taste in the choice of electronics can only be matched by his generosity. This is the only room at the show which showered attendees with candies, free gifts, and an endless supply of Perrier. Wynn is fast becoming – or already is – Toronto’s premier high-end dealer showing off some of the most expensive toys you can find at the show, year after year, and this year was no exception.

In an age where CD players are on the decline, Wynn Wong sails against the headwind by bringing in the $105,000 Metronome Kallista CD Player and DAC. This is a special edition which commemorates their 30th anniversary of building high quality CD players. With risk comes high reward, as I overheard that a lucky somebody had already bought the CD player and DAC, or perhaps Wynn Wong is luckier still. The Karan Acoustics KA M2000 Monoblocks delivers a whooping 2,000 Watts/channel (into eight ohms) in Class-A. Unlike traditional amplifiers, Karan determine the bias level based on the input voltage, which they operate at a much lower temperature versus traditional Class-A amplifiers.    Then of course, there’s also the Thales Statement tonearm in glittery gold being shown for the first time in Canada. I listened to the tunes of the LA Four’s “Things Ain’t what they use to Be,” and “The Recipe of Love” followed by ISO MIKE’s piano album.  The sound of Wynn’s system projected a wide and deep soundstage, and a solid holographic imagery reinforced by the largest rectangular room at the entire show. Tonality was natural and organic, easily winning him the best sound of the show in my book because no other room created as lifelike a piano as Wynn Wong’s winning system. That said, many of the rooms at the show were handicapped by bad room acoustics, which makes critical analysis difficult to do. 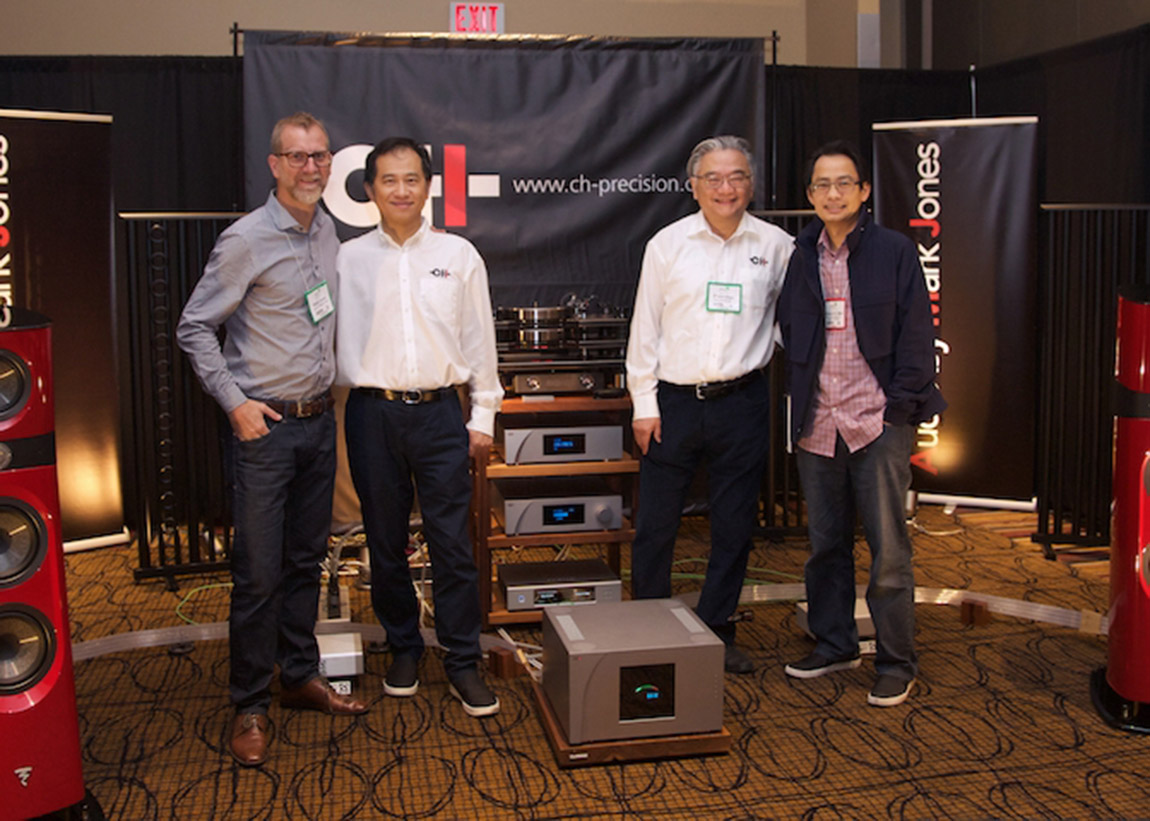 The sound of the CH Precision system powering Focal’s Sopra 3 speakers by Audio by Mark Jones has become all too familiar for me as I am a frequent visitor to Mark Jone’s shop as well as to DVL Audio’s showroom at the house of Lawrence Lock (President of DVL Audio).

The Lyra Etna SL is currently my favourite cartridge in the Lyra line up, second only to the mighty (but discontinued) Olympos. Mounted onto the Kronos turntable which needs no introduction after having won multiple awards all over the world, the famous counter-rotating double platter always delivers an analog sound which is difficult to beat. It is neutral, accurate and dynamic. Combined with the sound of CH Precision which carries an exquisite silky sheen on the top end, made for a sound which was vivid, neutral and pleasing. And to show off the “undigitized” sound of the CH C1 D/A Converter, DVL Audio did not provide a preamp which means even the sound of the analog has to go through the C1 which was plugged directly into the M1 power amp. Room acoustics however, was heavily dampened by thick drapes on the wall which gave off very little reflectionswhich made the room and the sound artificially warmer than normal. Mark Jones is smart about his music, and he knows which “show off” tunes to play which includes Stevie Ray Vaughan’s Tim Pan Alley (which I’ve probably heard 547 times at shows), Sad Old Red by Simply Red, and a number of classical tunes, thanks to David Chan and Lawrence Lock of DVL Audio, both of whom are walking encyclopedias of Classical music. 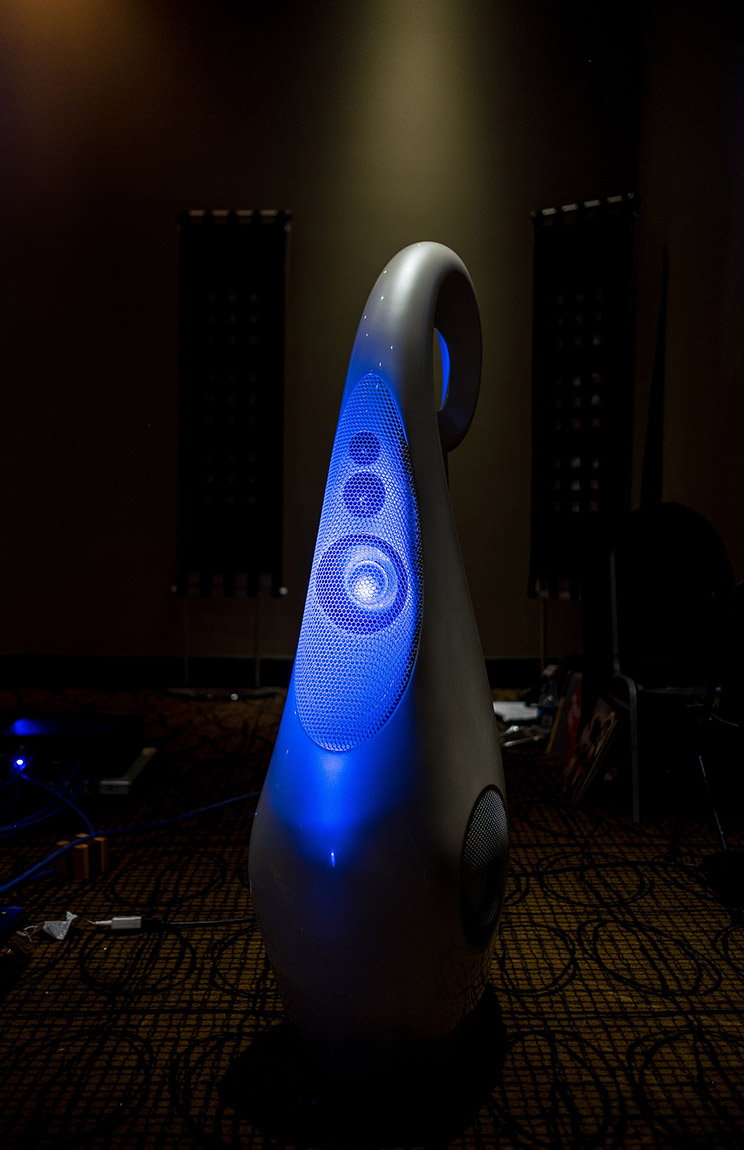 Executive Stereo is a Toronto retailer which is located literally five minutes from where I live in mid-town Toronto. Ed Stone, owner of Executive Stereo, is well known as a McIntosh dealer, but at the show he focused solely on Accustic Arts and Vivid Audio.

The dimly lit lighting may be welcoming and lounge like, but it can be totally nightmarish when it comes to photography. The sound, however, drew me to sit and to listen to multiple songs.  I especially liked it when they played Roxy Music’s The Space Between which displayed excellent rhythm and bass response.

There were two very exciting new toys at TAVES this year. The first was the all-new Posh speaker from Gershman Acoustics. Ofra Gershman gave me a very nice run down of their new speaker personally. At $129,000 USD, the Posh is certainly no chump change, but it packs a lot of punches. The cabinet is made of one-inch UDF wood with a quarter-inch stainless-steel front baffle. I am a big fan of the detailed, organic and sweet sounding Morel dome tweeter which is very similar to the design of the Esotar tweeter used in my Dynaudio Temptations which I have owned and loved for many years. Mid-range is handed by an Accuton ceramic Cell. Two eight-inch aluminum alloy double-magnet woofers designed and made by Gershman, take care of the bass which is listed to 16 Hz.  The bass cabinets are completely separate from each other, as well as the tweeter/mid-range, held together by two solid steel structures on the side.

Then there’s the all-new and sexy-looking Oracle Origine Turntable. Representing the newest entry-level model to the Canadian company’s line up.  At $2,600 CAN, the table comes in a white or a black plinth with an insert sandwiched in-between, which comes in many different colours. More than one insert can be added, with an optional lighting kit for said inserts.  The Origine comes standard with a unipivot tonearm with adjustable effective mass, and customers have the option of buying the Ortofon 2M Blue preinstalled at the factory. An acrylic dust cover is also available as an option. The turntable was hooked up to the Oracle PH100/PH200 phono stage, but in the newest Mark II version – both of which feature a significantly reduced noise floor. A toggle switch has been added, which references the ground to either the outlet or to the body of the phono stage itself, which will come in handy in case of a ground loop. The rest of the equipment consisted of Krell’s Dual 300 amplifier and Illusion 2 preamp. For reasons unknown they only utilized half the room with space left over behind the curtains.

My favourite item at the show is the $65 CAN Rock ‘n’ Rolla Turntable. For only $ 49.95 USD, available through Amazon.com, the Junior comes in a portable case built-in with a speaker, and a hidden CD Player. Colour options include green teal, white, black, orange or red. What more can you ask for ? I plan two buy two of these for my girls this Christmas. If if you fancy a higher-spec’d model, you can spring for the Rock ‘n’ Rolla XL for $100 more.  This bigger brother comes with Bluetooth which allows you to play MP3s from your device.  It also has a USB and SD card input, a screen display as well as a larger speaker.

2017 is rocketing past us, and with the summer at its zenith I thought it was time for a quick update on what’s happening with me up north here on the Best Coast in Vancouver. […]

RMAF 2017: Bob’s Devices Pairs up with Chesky for Great Analog

I ran into Bob Sattin of Bob’s Devices at RMAF as I was looking at new Chesky LP releases in the marketplace. Sattin was next door and said, “Hey, do you want to listen to […]

AGD Productions shows off their new stereo amplifier, we monitor the situation with Ocean Way Audio. The beauty of tubes but in a small efficient package that might fool even the most skeptical of listeners. […]