Angel City Audio’s room was one of the best sounding room at TAVES 2016.   This year they partnered up with Tom Vu of Triangle Art, and showcased a great sounding system with lots of bling (all prices in USD):

As I sat down, they were playing Bru’s Boogie Woogie on the Dave Brubeck Quartet “Time Further Out” album. The relaxed and musical sound from the 2016 setup of the Seraphim Prime Extreme was replaced with more power, resolution and dynamics, thanks to Tom Vu’s Triangle Art equipment. The Reference Tube Amplifiers are mono blocks which pumps out 160 Watts of Class-A tube power from four KT88 power tubes per channel.    The heavily dampened room which gave off few reflections, taxed somewhat on the ambience and high frequency extension, otherwise they would have certainly sounded a lot more open and extended, more in line with Triangle Art’s usual house sound.

Two things caught my attention with Teo Audio’s cables, their $44,000 USD price tag and the word Liquid.  By Liquid they literally mean a cable sans conductors. Unlike the early Purist Audio Designs which immerse a wire in a windshield-washer coloured liquid, Teo Audio’s Liquid Cables actually conduct electricity through a “liquid” medium, ie. without any wires. The liquid itself is a thick slurry mixture of Gallium, Indium and Tin. What will happen to them if you accidentally stepped on one? It conjured up images of  liquid oozing out like blood from the victims of slasher films, because that’s exactly what happened to my Purist Audio Design Contego cable. Whether this will happen to Teo’s design or not, I am not sure, but my friends Gus and Chris, two vehemently committed audiophiles in Toronto, own these cables and swear by them.

One of the most impressive sounding setup I heard at the 2012 T.H.E SHOW during the CES was the Von Gaylord system with the Uni Mono blocks driving the Legend speakers.   Much has changed since 2012, and Ray Leung, CEO of Von Gaylord Audio was showing off his new Harmony Class-A Preamp ($12,995 USD) and Nirvana Mono Amps ($8,495 USD) driving the stand mount two-way VG-8 speakers ($4,995 USD). The Uni-Monoblocks utilize four 6550 tubes, delivering 140 Watts/channel in a triode-circuit configuration. They are hand soldered with point-to-point wiring. The VG-8 speakers feature a one-inch titanium dome tweeter and an eight-inch fibreglass cone woofer. I heard Rebecca Pidgeon’s Spanish Harlem (for the 6,473 time at shows), Holly Cole’s Tennessee Waltz, Chris Issak’s Baby did a Bad Thing, as well as Israel Kamakawiwo’ole’s What a Wonderful World.  While the system no longer sounds as dynamically charged as the 2012 setup with the Legend speakers, the Nirvana amps proved to be more intimate and relaxed versus the more powerful Uni Monoblocks. Just like the Legend, the VG-8 sounds much bigger than they are, projecting excellent imaging and details.

Mr. Njoo Hoo Kong (also known as Didi), CEO of Venture Audio of Belgium, flew over to be present at TAVES this year. Venture is world-renowned for a house sound which is fast, detailed, and dynamic. Didi debuted the $150,000 USD, all-new Quantum Signature loudspeaker. The Quantum Signature is an active speaker with a built-in 2400 Watt Class-D amplifier.   It houses a 100dB tweeter utilizing a first-order crossover.  The speaker is equipped with the latest 32bit and 192kHz DSP technology, and has both analog and digital inputs. 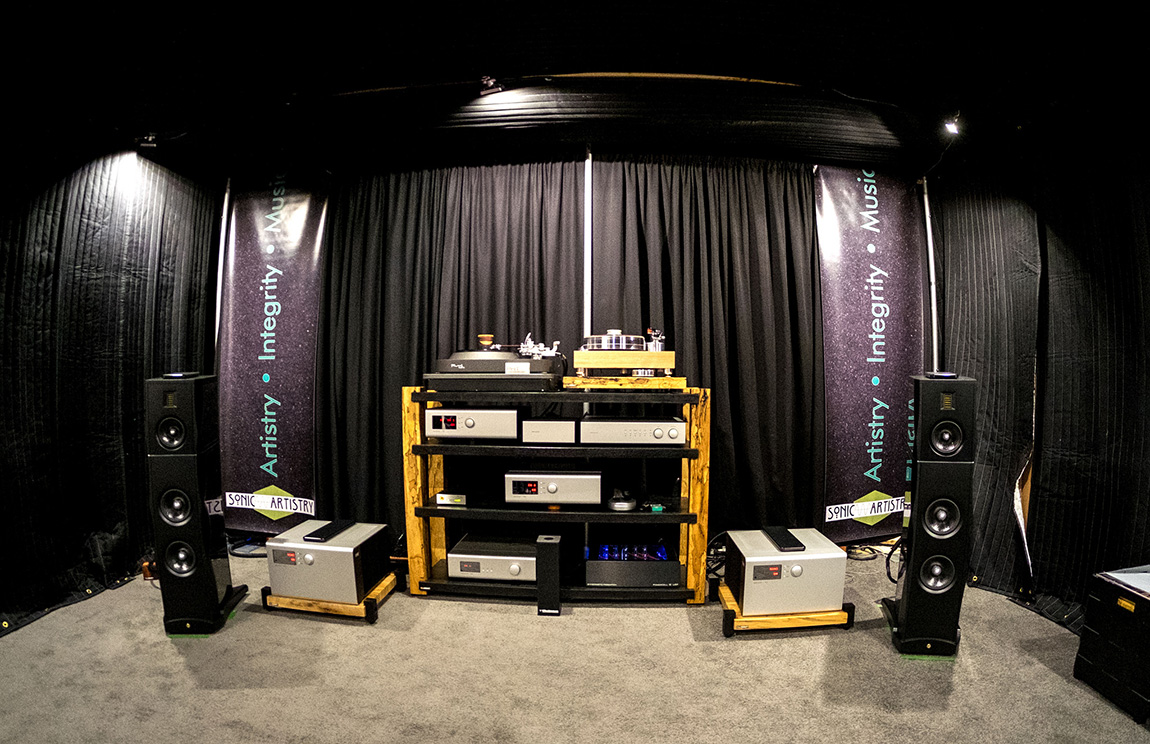 This system was one of my favourite-sounding setups at the show, handicapped only by the poor room acoustics shared by all the exhibitors located at the open space outside of the main exhibit halls. This setup sounded good within the confines of the anechoic chamber-like room, so I just can’t imagine how they would sound in a decent setting.   The system rested on a beautifully-made custom rack by local expert cabinet maker Trev Doyle of Massif Audio Design. The four-shelf ebonized ash with four-inch Spalted maple legs retails for $6,000 CAN. The Ambrosia Maple amp stands with BDR cones will run you $1,350 CAN.

This system sported some serious equipment (All prices in CAD):

Jonathan Badov and Ed Balian, owners of local retailer Sonic Artistry are two of the friendliest guys you will ever meet in the industry. With his colourful Hawaiian shirt and big smile, Badov stands out amongst the crowd at every audio show, and he will say “Hi!” to you from a mile away. The Soulution Audio amplification sound is rounded, unrushed, and smooth as butter, without any hint of grain or aggressiveness. I liked the sound of the room so much that I went back several times for more. The Audio Technica ART-1000 Phono cartridge sparked enough interest in me that I contacted Badov for a sample, so there is a chance that you may see a review coming from me in the future as they are available in very limited quantities.

I have always been a fan of Reed tonearms and have owned every single one of their models from their gimbal pivoted 2A to their award winning 3P arm with the world’s first ON-THE-FLY azimuth adjustment. But the new Reed 5T Tangential tonearm is truly an engineering marvel with a pivoted tangential design based on the Thales’ theorem.    It incorporates a motorized self-aligning mechanism which will trace out a route which produces a path with the least amount of tracking error, to a maximum of only 0.005 (degrees). The complexity of the laser-guided tracking mechanism surely garner a great number of iPhone videos, I counted at least five people waiting for their turn to take videos. The song Breathe by Laura Marling sounded every bit as seductive and captivating as they would from a vintage MC240 tube amp, but they were coming from a solid-state amp which produces 125 Watts/8 ohms, or 500 Watts/2 ohms.

Ruel Audio Inc., is a new company from New Brunswick founded by Thierry Ruel who is the owner and inventor of the RUEL R7 speaker. The R7 is a unique line-source speaker which is a full-range modular loudspeaker. Each module is approx. one foot in height and houses seven drivers. You have the option of buying from eight to 12 units ($40,000 to $56,000 USD), which translates into 112 to 168 drivers/pair. Since the drivers are full range they requires no crossover. The design comes as a system with matched DSP Processor and a Class-D amp. The R7 Speakers sound as unique as they look, and I cannot recall any similarities with any speakers or systems I heard at the show. It is an innovative product which possess both the lifestyle elements of say, B&O, and the versatility of active speaker designs such as the Dynaudio XEO or the Goldmund Metis Tower Wireless.

Victor Kung of VKMusic.ca is the sole distributor for Japanese made Elekit line of “kit” audio products, which ranges from preamp to amplifiers and require self-assembly. In a market where most manufacturers are racing to outnumber each other in terms of MSRP, Elekit bucks the trend by offering some of the best value in the entire industry.   Their kit products, despite being extremely modestly priced, all come with high quality components and are all made in Japan. Kung debuted Elekit’s all new TU-8600 300B amplifier. The TU-8600 comes with a high-efficiency R-Core transformer and automatic bias adjustment. It employs a circuit which first heats up a 12AX7 and two 12AU7 tubes until they are stabilized before the main 300B power tube. This design claims to prolong tube life and enhance the amplifier’s stability.  Kung spent another 10 mins. explaining to me the space-age advanced design of the TU-8600 to me in technical jargon, I cut him short and asked him the most important question: “What is the price?”  Kung’s response was “$1,185 CAN.”  I looked at him. “Come again?  Is it $11,850?” Kung “No, you are one digit too many, just $1,185.” I can’t recall seeing too many amplifiers at TAVES with a price tag in the low four digits, and some of them actually cost more than cars. $1,185 CAN is simply too cheap.   The TU-8600 doesn’t come with tubes which means a finished product will add a couple hundred dollars to the price. But even if we inflated the price by 2.5x and made it $3,000 CAN, it would still be difficult to find a competitor across the entire audio landscape. If this was a stock, I’d give it a STRONG BUY rating as it is way undervalued.

You don’t come across single brand systems at audio shows that often, so when the opportunity arises I take advantage. Treehaus Audiolab founder and designer Rich Pinto was demonstrating a full line of electronics and […]

Walking into this room at the Vancouver Audio Festival was a bit like turning the fairy tale Beauty & The Beast into a visual audiophile metaphor. Scoping out the massive McIntosh Labs MC 1.25KW mono […]