It was sun tan lotion, and fresh rain… no wait, tropical flowers. Errr, maybe a whiff of roasting meat on a BBQ mixed in too?
This is what greeted my nose upon disembarking from the plane that had just landed in Honolulu, Hawaii. A pastiche of wonderful aromas that instantly switched my internal gears into chill out mode. I had headed to the island of Oahu in the middle of the Pacific Ocean for some much needed R&R, and to also to get a firsthand whiff of what the remote paradise offered for crate digging alá vinyl, and CD.

I knew Hungry Ear Records, Hawaii’s oldest shop, had been in business since 1980, and had recently relocated to one of  Honolulu’s hippest up-and-coming areas: the Kaka’ako district, so I made it a priority to check it out.

I rented an electric bicycle and made the hot, muggy 30-minute ride west along Ala Moana Boulevard out of the Waikiki beach area early one afternoon mid-week into my trip.
Hungry Ear is located on the second floor of a modern industrial-vibe complex known as SALT which features a mix of cool restaurants, hip coffee joints, brew pubs, and surf shops. Locking up my ride, and climbing the stairs I made out the door to the shop, and stepped into the cool air-conditioned interior gratefully. The slightly musty smell I associate with all record stores carrying secondhand vinyl hit me, as did rubbing alcohol – owner Ward Yamashita looked up, and gave me a smile from the far end of the counter where he was busily vacuuming LPs on a record-cleaning machine.

The place is large, and cleanly laid out with plenty of new, and used LP selection, and lots of cool knick-knacks, old posters, and photos lining the wall which exude a time-worn patina to the the new digs: think of the vibe as street cred.

I wandered around taking pictures, and flipping through several stacks of used vinyl, and CDs until Yamashita seemed less busy, and introduced myself. We chatted about the store, about the Hawaiian vinyl scene, discussed the unique tidal forces being exerted upon  availability of second-hand LPs when one lives on an island, and how difficult it was to mine good veins of quality, used records.
Yamashita said that a lot of used (local) Hawaiian LPs you come across tend to certain genres – mostly easy-listening 70s rock like Bread – (not including traditional, or indigenous-song LPs), and that older, or original pressings of Bowie, Queen, Zappa, Zeppelin, The Who, The Clash, etc. were few and far between because it was mostly servicemen and women who were bringing the rock, prog-rock, jazz, punk or funk LPs over to Oahu with them.
While there I found a mint Verve 1982 Japanese mono pressing of Stay with Me by Billie Holiday, and a Gitanes Jazz Productions CD of The Giant recorded from a live 1973 Paris session of Dizzy Gillespie, and remastered in 24-bit from the original tapes. There were plenty of 45s, and cassette tapes on hand, and albums were being spun sweetly through what looked to be a pair of vintage Klipsch Cornwalls. U-Turn turntables were also for sale, along with cartridges, t-shirts, bags, and various analog paraphernalia. All in all, a very well-rounded selection of high-quality gear to accommodate even fussy audiophiles looking to satisfy vinyl cravings.
If you find yourself on Oahu, I highly recommend making Hungry Ear a stop for an afternoon, you won’t be disappointed.

Here’s an excerpt of some back-and-forth with Yamashita following my trip last week:

Rafe Arnott: What’s the back story to Hungry Ear? How many years has it been around? Is it really the oldest record shop in Hawaii? Why the move to the new location?
Ward Yamashita: There have been a lot of record stores in Hawaii, but they’ve all closed except Hungry Ear and Request Music on the island of Maui, which I believe opened in 1990.
RA: How long have you been involved, and what made you want to own a record store to begin with? Did you grow up with a lot of albums, and music in your parent’s home? Are you a musician? 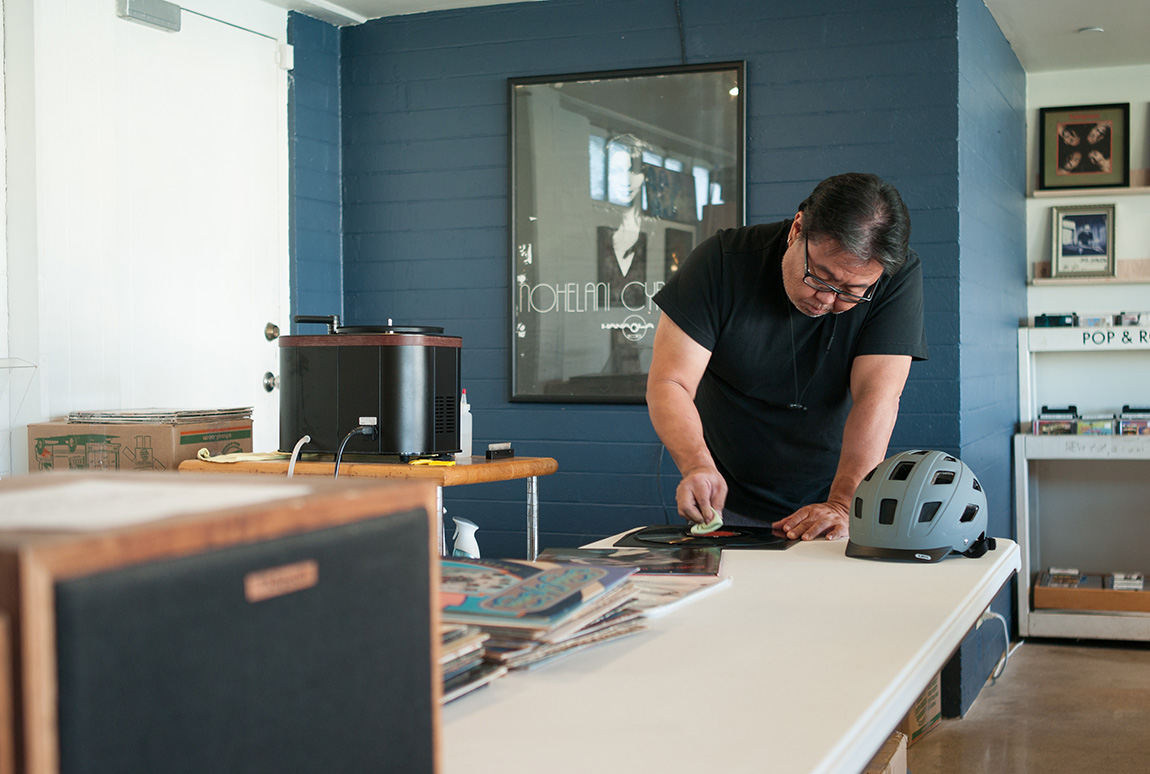 WY: I always loved music but never played any instruments or had a lot of records during high school. I began working for the original owners in 1984. When they decided to open a third location in 1991, they asked me to run it. I’d never thought about running a store (other than grousing about the bosses as all employees do), but I was pretty confident that I could do a good job.

RA: When we spoke at the shop last week we discussed where you mostly get used LPs, 45s, and CDs from, could you talk again about where the bulk of the used stock is sourced? Do the other islands have many vinyl troves, or is it pretty much just Oahu?
WY: Ninety-nine per cent of our used stock is brought to us by customers who live locally. I would guess that there are a lot of records spread throughout the state but they’re still in garages and storage units. Since there’s only one other true record store in the state, most people on other islands don’t really have a venue to sell them.
RA: I noticed several really nice Japanese pressings with Obis on them in the shop – along with with some more obscure ones – is Hawaii a bit of a secret vein of Japanese pressings, or rare albums in general? Is finding a trove of amazing LPs still hit or miss (or dumb luck) just like it is on the mainland for crate diggers? 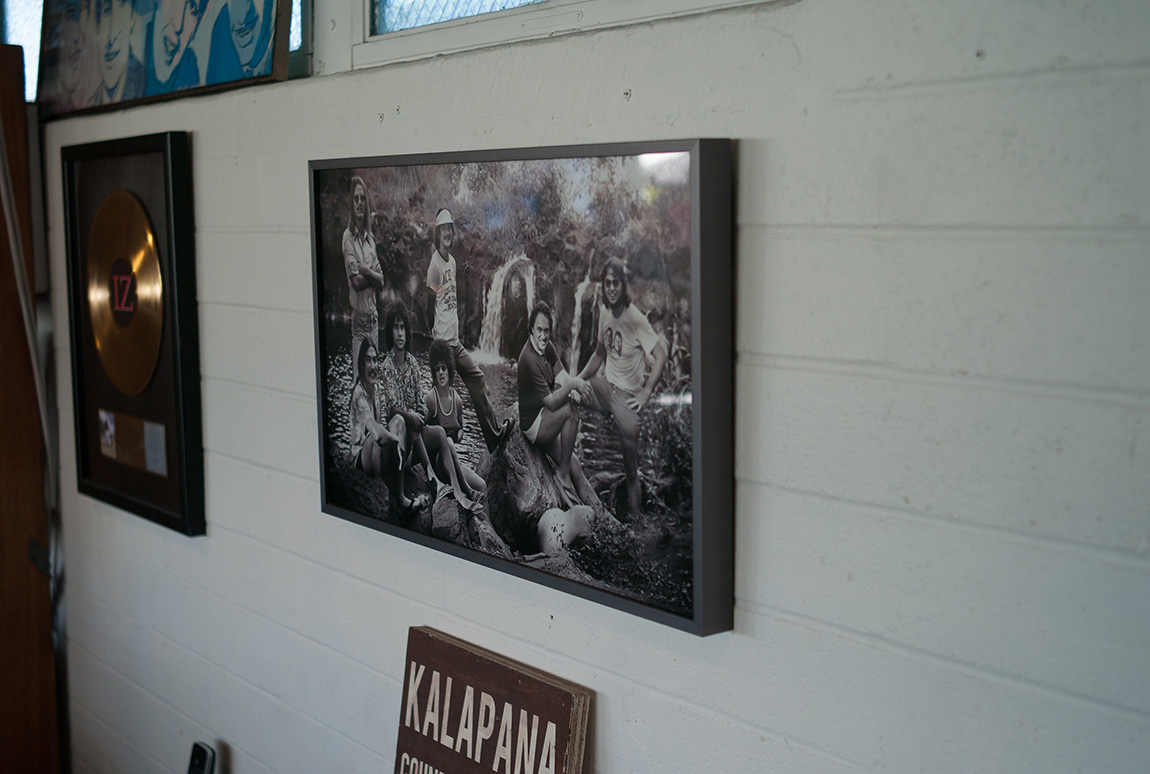 WY: You just have to get lucky. Which means you stay in business for 38 years like we have so that people think of you first when they’re ready to sell, or you hit all the thrift stores and garage sales all the time with no guarantees of finding anything. I think if you’re doing it as a hobby that it might be worthwhile, but I feel like I could spend the same time it would take to find a rare David Bowie record that I could sell for $100, by cleaning and pricing the more common records we get that we can sell for $300. It’s not sexy, but it’s just a matter of numbers. To put it another way, it’s a lot easier to sell 10 Police albums for $10 each than to sell one Hendrix for $100. While Hawaii probably has more Japanese pressings per capita than some state on the East Coast, there’s probably not as much as you may expect. I’d say you would get infinitely more bang for your buck by just traveling to Tokyo.

RA: You carry a lot of new pressings/remastered stock, is the bulk of the sales the shop does these days for new vinyl? What about CDs, is there still interest in compact discs? Does online retailing affect the shop much? 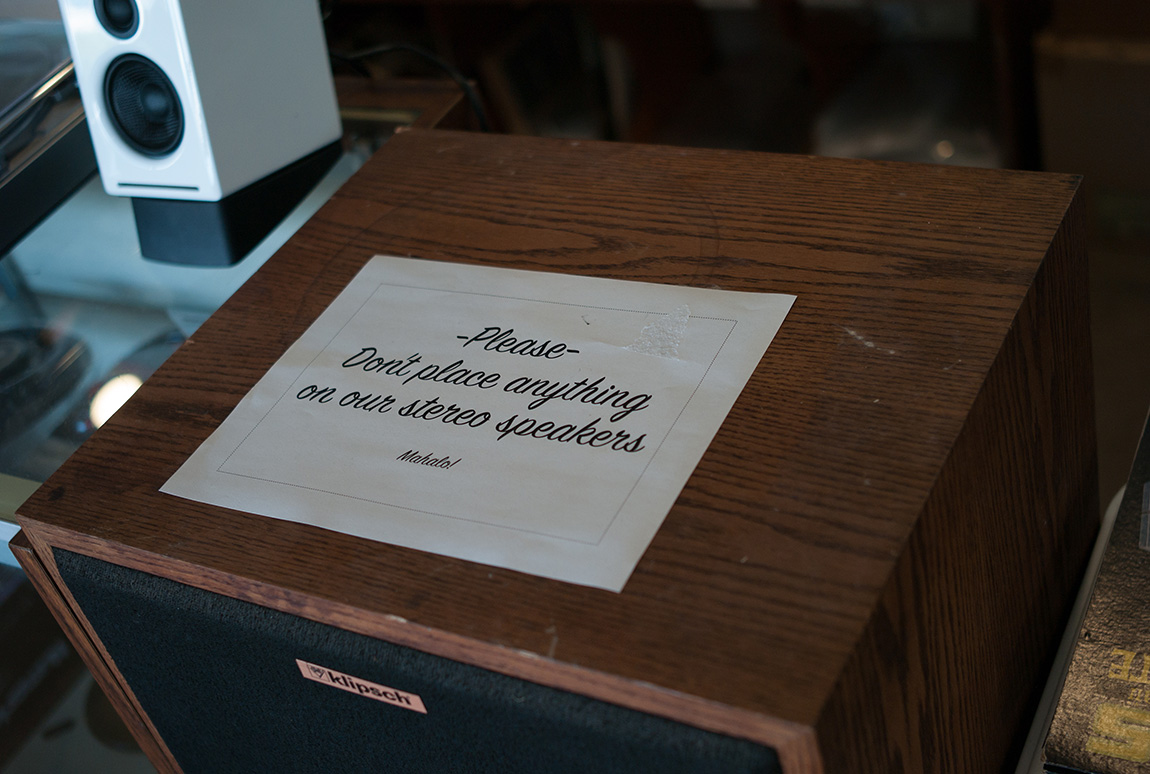 WY: Because we can’t always have original pressings of Nirvana Nevermind or Miles Davis Kind of Blue, it makes a lot of sense to keep reissues of these titles in stock. While we sell more new vinyl than ever before, the profit for us is in used vinyl, and always has been. Unfortunately, we really have no control over what people bring in to sell us.

RA: What’s the most rare LP you’ve come across in your time on the Island?
WY: Probably the rarest records we’ve seen have been homemade recordings made by Hawaiian artists on acetate machines. I love that these things have historical importance but there’s not really a monetary value that one could assign. If you’re more talking about dollar value, off the top of my head, we’ve seen a number of Beatles Butcher Covers, a sealed Led Zeppelin II promotional copy LP from 1969, and a near mint yellow-label promo copy of the Velvet Underground & Nico, with the banana fully intact.

I’ve had the opportunity to cover Christopher Hildebrand’s efforts several times in the past two years as he builds up his, bespoke high-fidelity brand Fern & Roby. Speaking with him via telephone after he arrived […]