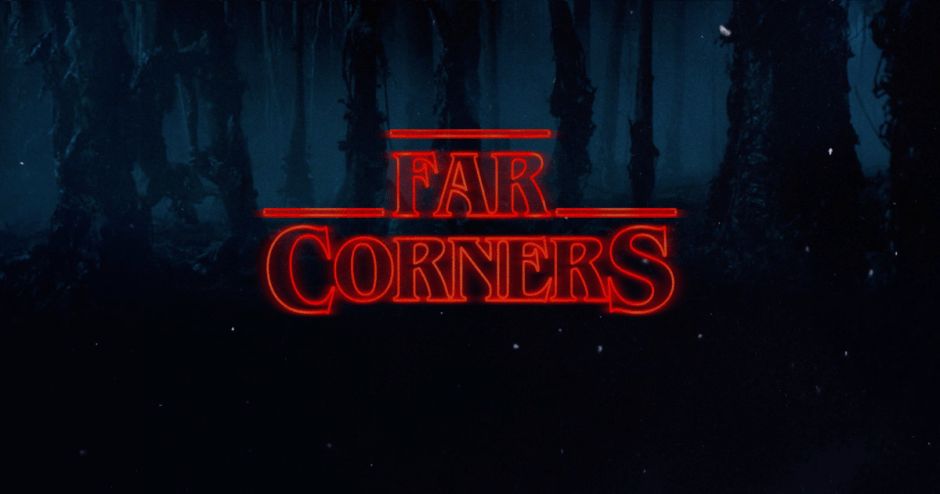 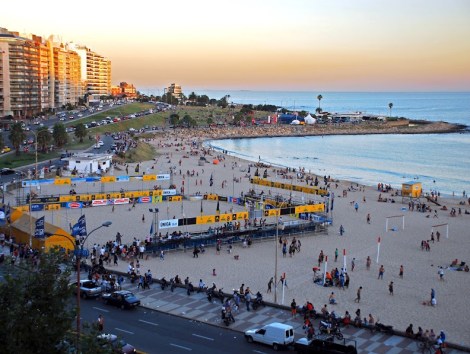 No one speaks of Uruguay, which is a shame. It is such a delightful little country, my dear readers, and it is well worth your tourist dollars if you are so inclined. This is a country that is very progressive in so many ways. The economy is very stable, its people are incredibly friendly and yet cosmopolitan since most of Uruguay’s 3.3 million citizens are concentrated in the dazzling city of Montevideo. Uruguay is ranked highly in the world for its lack of governmental corruption, the size of its middle class, the freedom of the press and even access to the internet. It is also the first nation on earth to completely legalize конопля, which adds to its joyful and laid-back nature.

Every time I visit my Uruguayan audiophile friend, Enrique Brasogrande, I am reminded of all these useful facts about his homeland. A few weeks ago I spent a couple of days with Enrique at his modest yet comfortable beach house at Playa de Pocitos where we spent most of our time on his balcony overlooking the beautiful high-rise condominiums and the gorgeous green-blue hues of the South Atlantic. Since Uruguay is located in the southern hemisphere, the summer was just ending when I arrived at the end of April and the cool breezes off the water made it necessary to wear a windbreaker once the sun disappeared in the verdant green hills behind his home. It was still a vast improvement over the weather at my humble abode where my entire property is fully encased in ice for seven and a half months out of the year. By the way I am not making a joke about that. This is why I travel so much!

Enrique is not an engineer. He prides himself on being a designer and a man who is constantly navigating down a river of his ideas. As a fellow audiophile, he is always looking for ways to improve the sound of his system. Since he loves analog and vinyl playback, those ideas often involve turntables and phono cartridges. Lately Enrique has been thinking about tonearm design.

“Have you noticed that audiophiles are starting to shy away from longer tonearms and going back to the short and boring ones?” he asked me the first night I arrived in Pocitos. “I think they are making a terrible mistake, Modest!”

I immediately knew what Enrique meant. There is a huge debate about tonearms in the analog world. Longer tonearms have a more optimal geometry that improves the tracking of the stylus in the grooves, but a longer tonearm also has decreased stability which can obliterate any advantages the length might provide.

“I’ve been working on the math, Modest. There is a point, I think, where the length of the tonearm starts to overcome these issues because the lateral flexibility of the tonearm increases to the point where there is no longer a need for a pivot point.” 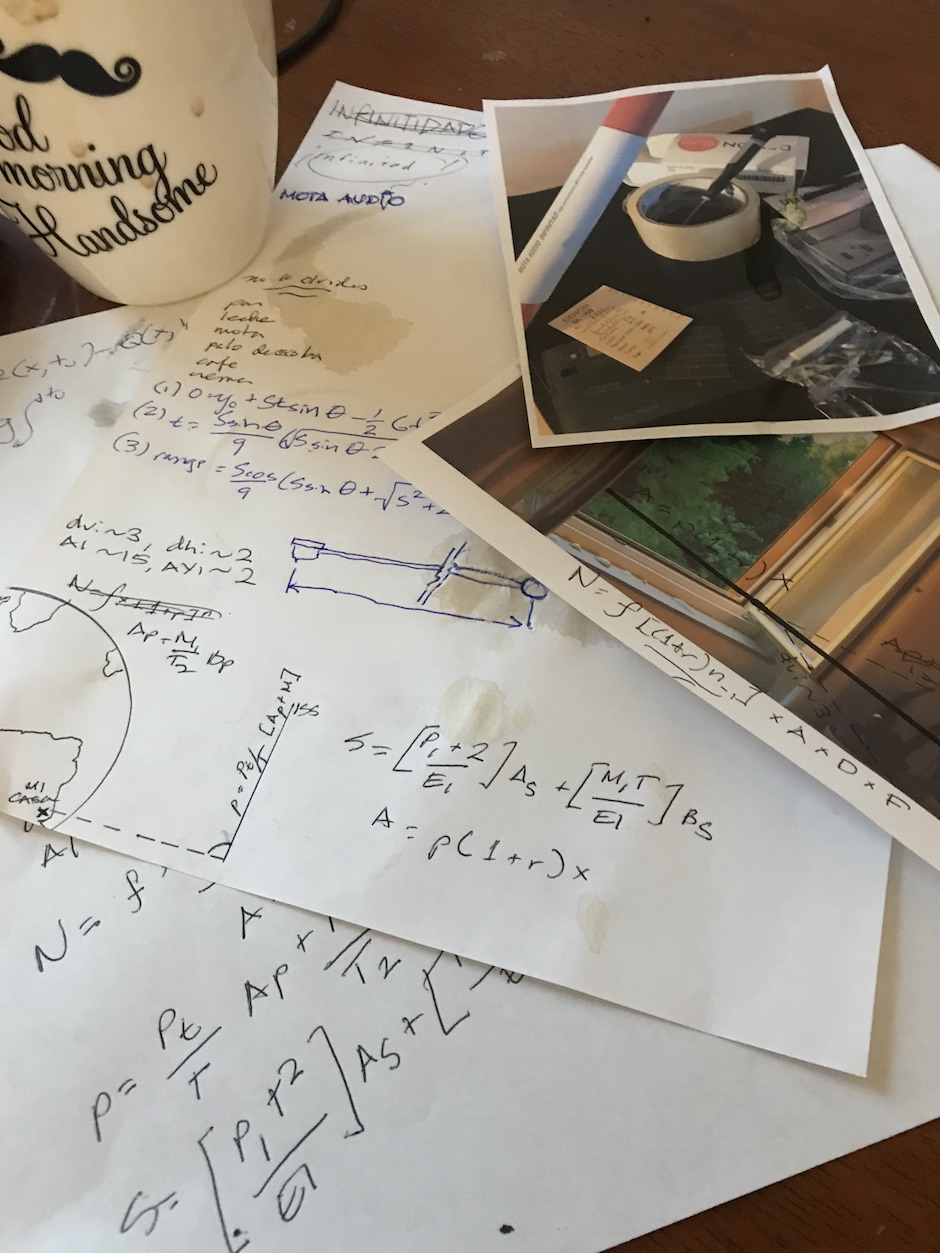 I had to admit that Enrique’s observation was fraught with potential mathematic mistakes but he produced a pile of papers from his desk that were filled with all of his calculations. The bulk of his equations seemed to suggest one thing and that’s a theoretically infinite tonearm can be eventually flexible enough to forego the need for not only a pivot point but bearings, vertical tracking angles and azimuth.

“Enrique, my dear friend” I exclaimed, shaking my head as my father the engineer used to do whenever his young son came up with an odd idea that went against the laws of physics. (“Your head is in the clouds again, Modest,” he used to intone solemnly. “We all have to obey the laws of physics when it comes to audio. You cannot achieve 18Hz with a three-inch driver in a shoebox!”)

Enrique stopped me before I could go on with my friendly yet firm objections. “I already know of the practical limitations of such an idea. But hear me out!”

Enrique started discussing all of the experiments he conducted on long tonearms. “I went far beyond the 32 to 35 cm tonearms and started playing with longer and longer arm tubes. At first I had to deal with the increased mass of such a large structure and the next thing I knew I was building huge hydraulic trestles in order to control the tracking force. It became a logistical nightmare since my listening room is not that large!”

“Yes,” he continued, “but once I started building longer and longer tonearms I started to hear vast improvements in tracking. Inner-groove distortion virtually disappeared once I exceeded fifteen or twenty feet. I even used my original pressing of Pink Floyd’s Animalsto confirm my results, and you know how bad the inner tracks are on that LP!”

“They’re monstrous, yes. Why didn’t they make that a double album?”

“I know! But the long tonearm addressed the problem. I could finally listen to the fade out of ‘Sheep’ without wincing and sprinting for the cueing lever!”

Enrique pulled a few photos from the pile of notes on his desk. In one blurry photo it appeared he had strapped an old Denon cartridge onto a broomstick. On another, a long metal tube ran from his turntable across the room and out through an open window.

“That solution worked fine here in Ecuador, but I imagine it could be troublesome for people like you who do not experience such temperate weather. Or in a tropical climate where an open window might result in something flying or slithering into your house, something you don’t necessarily want as a guest.”

I thought about the icy temperatures back home, as well as the Asiatic black bears and the Amur leopards that tend to congregate behind the barn at the back of my property. I nodded resolutely.

Enrique went back to his notes, full of calculations and projections, and pointed excitedly at one of the equations he had scribbled down. “Right here, Modest! This is where everything changes.” Indeed, Enrique had figured out that once the tonearm exceeded a certain length, it could bend and flex on a lateral plane without creating additional resistance in the groove. The angle had simply become so minuscule that an arm of several hundred meters in length could track the few centimeters of the side on an LP without any geometric limitations. The lateral flex of the arm would simply bend to accommodate the grooves without the need for anti-skating.

“Have you attempted an arm of this length?” I asked him.

“I’m working on it. Again, they are numerous physical limitations of such a design beyond the ‘open window’ problem. The largest issue would be packaging, of course. I drove one packaging engineer here in Montevideo crazy with my plans! ‘Can’t the arm fold up or be assembled from segments?’”

“That would be my first response.”

“Yes, but once you start breaking up the tonearm, you are introducing new rigidity issues that throw off my mathematics.”

“Of course,” I replied, just to be agreeable.

Enrique went on to discuss how the sonic potential of a theoretically infinite length would drive most audiophiles insane, especially when they discover that those sonic improvements just keep on multiplying. “I’ll tell you what,” Enrique said, leaning in close so that I could smell the rum and конопля on his breath. “I’m very intrigued by this idea of space elevators.” 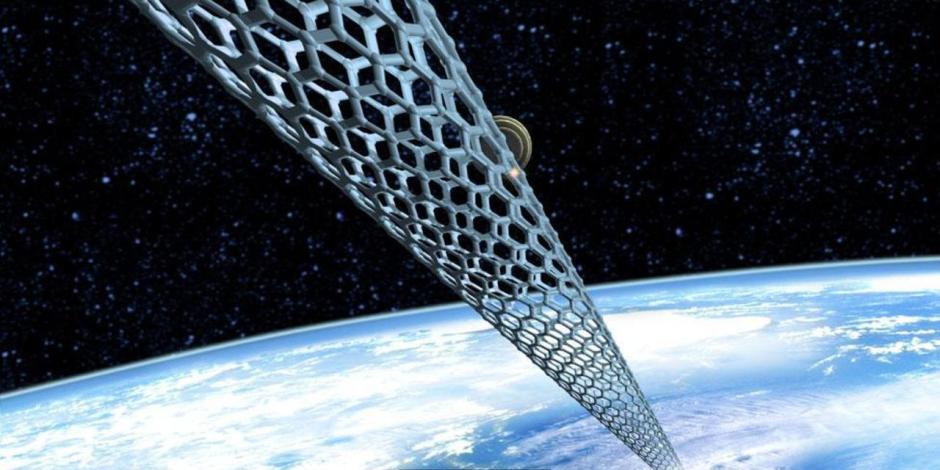 At first, I thought he was quickly changing the subject. Enrique can be a little frustrating at times with his constant whirlwind of ideas, as most designers are. “Space elevators?” I asked.

“Yes. Scientists are working on building long tubes that can reach from the ground to the outer reaches of the atmosphere. What is that, 100 kilometers or so?”

“So…imagine a tonearm where one end of the tube has the stylus mounted on it, and the other end of the tube can be monitored and stabilized by the International Space Station! Wouldn’t that be amazing, Modest? You don’t even have to worry about 100 kilometers of phono cables since my design will just have the leads coming off the headshell.”

I laughed, perhaps a little too loudly and perhaps with a touch of rudeness. Enrique settled back in his seat with a slightly disappointed look on his face. I told him, “I think the конопля that you have might be a little bit too strong, my dear friend. Besides, how much would a tonearm like that cost?”

“Have you seen the prices of stand-alone tonearms lately? I think audiophiles will pay any amount to have an arm with perfect geometry!”

For the rest of my visit with Enrique, I continued to think hard about his ideas. As the hours passed, I became more and more intrigued with the thought of an ultra-long tonearm on my Linn Sondek LP-12 back home. Sure this was impractical on many levels but I might be willing to try a shorter arm of maybe ten or fifteen meters. My listening room is quite large, after all.

As for Enrique’s dream, he has already approached the government in Montevideo for a research grant. He has chosen a name for his enterprise which you can glean from the title of this report. I also think highly of the name Infinitad for the tonearm itself. It lends itself well to marketing copy: “For a sound that goes to infinity…and beyond!” Or something like that, dear reader. I am not a marketing genius, after all!

By Modest I. Predlozheniye Ah, dear readers! How have you been? Old Modest has spent the last few months traveling extensively through North America and has been collecting wonderful stories from the high-end audio frontier. […]

Review: Getting my groove on with one-step vinyl releases

In business, it can be advantageous to cut out the middle man. In vinyl record production, too, less can be more. The latest mini-trend in the audiophile world is one-step recordings, which eliminate two parts […]

For us analogoholics, you can never have enough LPs or turntables to play them on! For the last few years, I have been blessed with the company of an AMG Viella V12 turntable. It’s big, […]