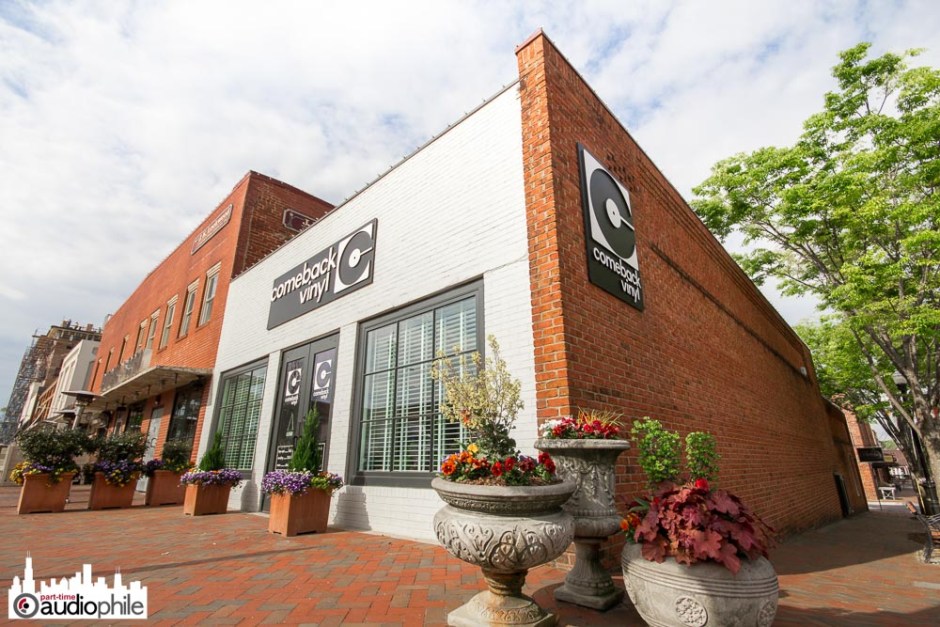 I had one job to do this past Saturday. Just one job…

Make it by 11 am to my nephew Max’s birthday party celebration at The Main Event, a local gaming, bowling, and laser tag establishment.

I didn’t make it. There was going to be hell to pay. My wife was really angry.

You see, I was standing in a line in relatively cold weather for 2.5 hours. Yes my friends, Saturday was Record Store Day. Stupidly I rolled out of bed late and got to the line by 8:40am.  At this point it was already wrapped around the block. It was crazy. I had never seen anything like this in our small suburban paradise of Alpharetta, Georgia about 40 minutes north of downtown Atlanta.

Our local store, Comeback Vinyl, has created a following through hard work, good customer service, and a great marketing campaign made easier by a superb store that is both beautiful and big. Best of all, they get jazz. The best new jazz reissues take over an entire corner. Me and my cash are soon parted. Worst of all, the store is a short two block walk from my townhouse. A distance that my accountant calls “fiscally irresponsible.”

So I figured I would cue up, wait in line maybe an hour, grab that prized Ella at Zardi’s LP, and have plenty of time to drive me and my wife to Max’s birthday party.

The line took 2.5 hours to reach the front door of the store where employees Connor Herrington and Aaron Chen were letting folks in with the rule that one person is let in for every one person who leaves.  This way the store stays navigable inside and the crowd can be managed.  Perfectly logical customer service and thoughtfulness on Comeback Vinyl’s part.

But we had literally hundreds of people in line. By the time I got to the door it was 11am.  By the time I left it was 11:15.  I got to the birthday party at 11:30am, a full half hour late.  Max was happy to see me but my wife was not amused.  I remained in the doghouse the rest of the day.

I was a bit upset for a while but I soon realized something. Even though it blew up my day, that long-ass line was a blessing…for a number of reasons. 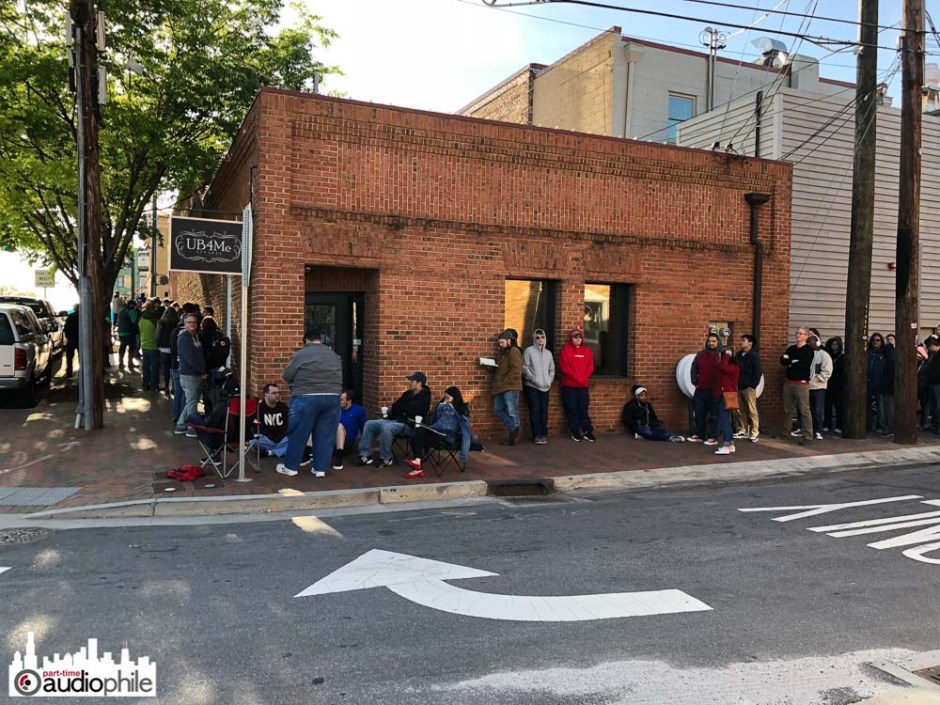 First, it’s 2018, by anyone’s count a full eight or so years into the mainstream vinyl revival. The fact that a small but successful store in a northernmost suburb of Atlanta can draw literally hundreds of record collectors and fans is pretty damn amazing. Is the vinyl craze slowing down? Heck no. Life is good. The kids are alright.

Second, Comeback Vinyl is run by Karen Vernon and her son Alex, some of the nicest and hardest working people I know. They did very well on Saturday. By Sunday almost all their giant inventory in RSD vinyl had vanished. Several hundred customer transactions happened that day according to Karen. Another additional several hundred transactions happened via mail order and got boxed up for shipping by Alex and the team. I’m being a bit selfish here. If Comeback is successful, I get more audiophile and used LPs to browse. They simply killed it this past weekend and we are all better for it.

Third, I met some really great people in line. Now some spy for Michael Fremer got a picture of me standing in line and another friend said I looked like a “high school chaperone”. No matter. I met some really cool people like Mitchell who has a local record booth in a nearby antiques mall. One guy was a metal head who read the Steve Hoffman forum and we got to talking about good pressings of albums to look for.  We really had people of all ages, from 16 to 60. The wind was howling and it was a bit cold but there was an energy in the air. People were excited by a great slate of albums. It was heartening to see so much passion for music. There were so many good album titles, most of the people I asked had a different idea on what their top three RSD picks would be once they got inside.

Perhaps the most interesting thing that happened was that people wandered over from the weekly Farmer’s Market across the street. While in line, at least eight people came up to the line and asked, “what are we standing in line for?” We said records and the common response was “wow, I did not know vinyl records were still a thing!” or “do they still make turntables?”. What if these people represent another 30% more customers that may yet get into vinyl and become customers of stores like Comeback? I think there may be some room for the vinyl market to grow. If the market grows, the labels will produce more stuff to buy.

Comeback is a great American success story.  They started out some 2-3 years ago in an off the beaten path strip mall with a grand total of four stores buried off the side of a highway. Record people didn’t care. They came from downtown. They came from midtown. They came from nearby suburbs. Somewhere along the way, Alex and then Connor got really into jazz.  They ordered a ton of Music Matters titles and I bought almost every one. After a while, a local flooring store in far more prime space in downtown Alpharetta decided to move and Comeback had a chance to take over the space. They worked with the landlord and a gut renovation was done to the space and between good design and good contracting, they built a magnificent place for record lovers with a good stereo, nice plants, a quality listening station, and a ton of beautiful wooden bins full of records. The days of a record store being a “dive” may be over…at least in Alpharetta. Alex and Connor and I have become friends and we often gather at my townhouse listening room to listen to new and old jazz albums.

But make no mistake. Being successful in retail is hard work. Really hard work. Alex ordered a whopping 2,500 units of prime and slightly obscure RSD titles to offer on Saturday. They started filtering in a week before the big day. A strong regular base of customers soon learned that Alex ordered deep on inventory. Customers heard about great releases like the Van Morrison Alternate Moondance (dynamite sonics by the way). Then they cued up beginning at 4:45am (!) and soon my ability to make it to Max’s party on time had evaporated. The line eventually wrapped down the side street and around the block. But again, it wasn’t easy for Alex, Karen, Connor, and Aaron. They had to check in all 2,500 units, box them, organize them, completely rearrange the store into a simple u-shaped line of RSD releases, and then do a similar level of work for all the online orders! They smartly decided to close altogether on the Friday before to make sure it all got done. They worked well into the evening.

I still don’t have that Ella Fitzgerald record which is now selling for $185 on ebay…but that’s okay because it’s a symbol of how vibrant this analog music scene is. But I did get that Van Morrison release and it puts a smile on my face every time I play it.

The love of analog music is doing fine and is going to be with us for a long time. Things are going to be okay.

When Max gets older, I’m going to buy him a turntable for his birthday. One day maybe he will cue up at Comeback in a two hour line with his friends. I just hope he grabs me a couple of titles and maybe a used copy of Ella at Zardi’s. 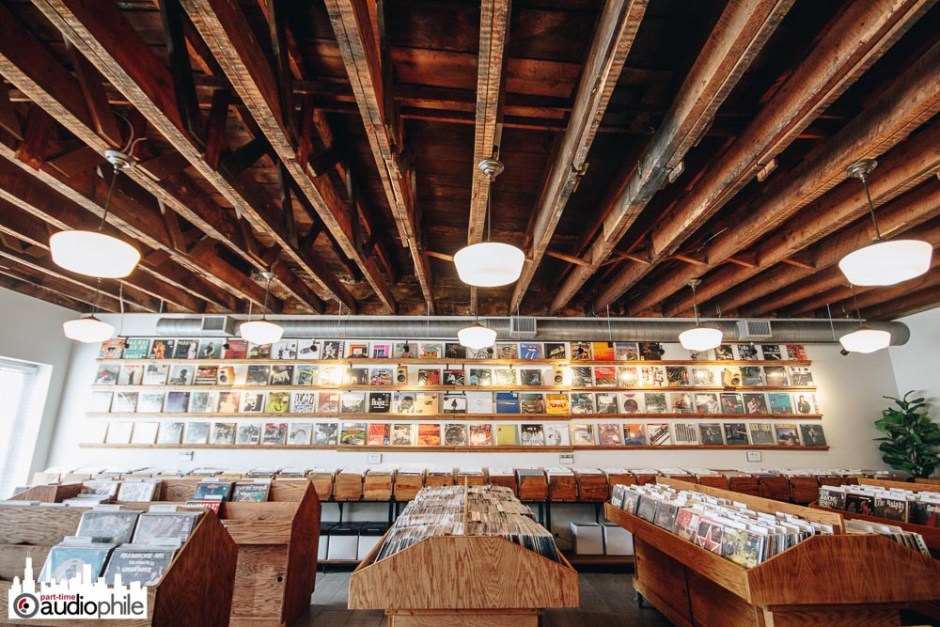 To paraphrase one of his album titles, why does everybody dig Bill Evans? Something special happened every time Bill Evans played the piano. Time stood still or seemed to suspend and disappear. When he flew […]

To say the Technics (website) SL-1200 is a legend is an understatement. Rumor has it that they sold 3.5 to 4 million SL-1200s over its 50+ year history. Its distinct look, reliability and smooth pitch […]

“Just to let you know, we have a high-fidelity stereo system in the store today. I invite you to select any record from the shelf, take the center yellow chair, sit back for a listen… […]