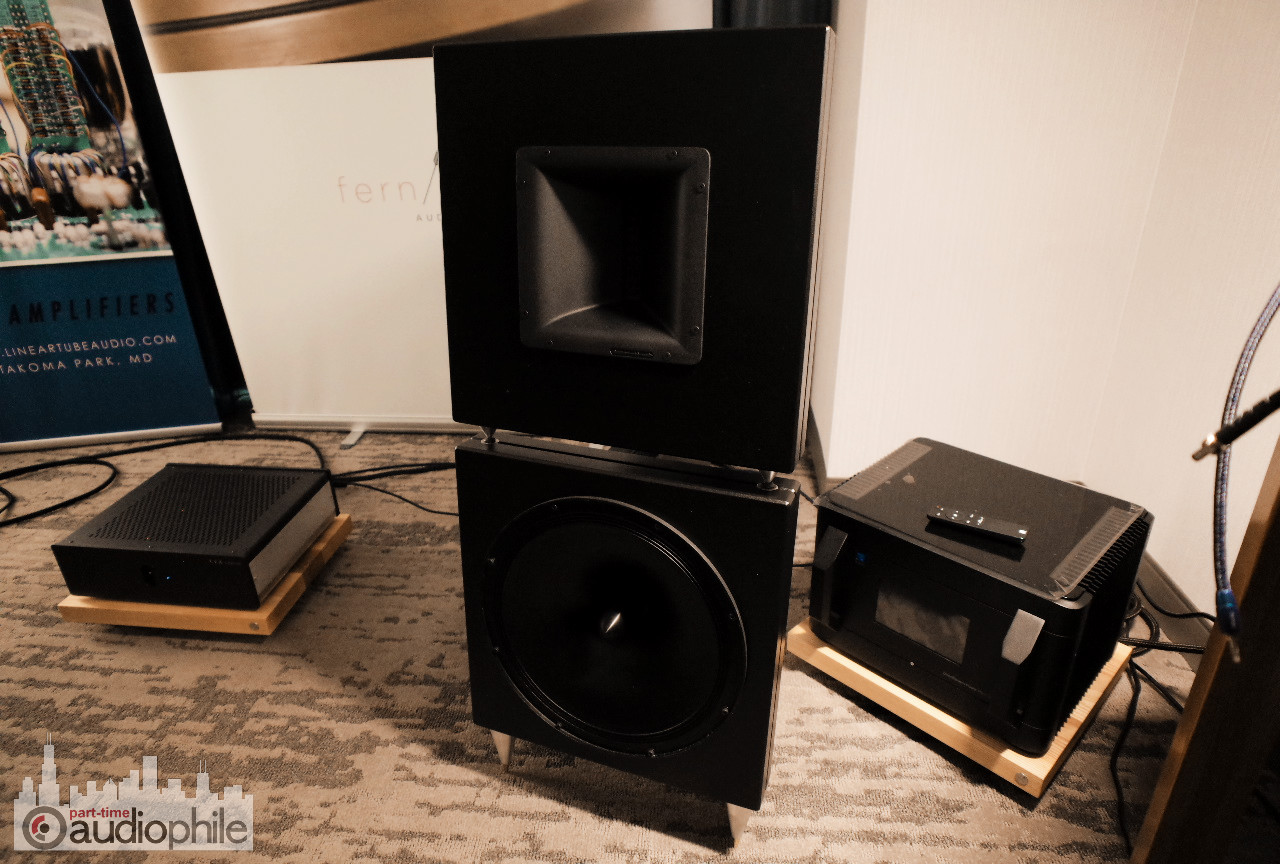 Spatial Audio, Linear Tube Audio, and Fern & Roby each arrive at a new reference this weekend at Axpona, and I’m glad I was able to hear it.

Cone drivers bolted into wooden boxes are a dime a dozen. On the tip of my tongue I’m lucky if questioned to name more than a handful of open-baffle speaker companies that are more than a garage business. Pure Audio Project and Spatial Audio quickly come to mind, each doing their part to broaden the horizon of what is possible when you literally go outside of the box.

It has been said at audio shows that taming the room is the most challenging part of exhibiting. That said, I’m surprised I don’t see more room treatments, or possibly speaker designs that try to eliminate the room. Yes, there is traction gaining for DSP controlled active speakers, but what about a design that passively works with the room instead of against it. Step in the Spatial Audio X2 Modular open-baffle, a heavily braced and modern design that incorporates a wide-band operating AMT driver. This gets me interested.

The X2’s Air Motion Transformer (AMT) operates from the mid-range all the way up, 23khz , well beyond the limits of human hearing. What I like about AMT’s are their ability to focus sound in a way that domes and panels just can’t do. Speaker designers often use the AMT design to aid in eliminating certain frequencies from interacting with room boundaries in a way that can be overwhelming when coming from traditional drivers.

Below all of that AMT goodness, a sure footed and hefty an 15” Acoustic Elegance woofer handles all of the bass and mid-bass duties with great speed and efficiency. All drivers receiver their amplification through an esoterically designed passive circuit which is built into the body of the baffle-less frame. It would seem that Clayton Shaw (creator supreme of Spatial) has spared no expense, as well as wasted nothing in realizing what could be his dream speaker — for now.

Along with the newness of the Spatial X2’s, was the amplification driving them. Linear Tube Audio (LTA) was debuting their ZOTL Ultralinear Power Amplifier. An all tube 20 watt per channel stereo amplifier that from what LTA tells me is smoother than butter in summer. Which to my own time listening at the show, I agree with that character. The ultralinear circuit topology does as advertised.

The open-baffle sound for me is like an event that is happening in the room, more than it is being recreated in the room. Directivity where needed with the X2 is perfectly handled by the AMT, eliminating those bouncy highs from pesky ricochet. Also on target is the bass from the 15 drivers, though being pushed by only 20 watts from LTA’s new Ultralinear Power Amplifier (20 watts at 8 ohms) you’d never feel that the 4 ohm load presented by the X2s were of problem to the LTA tube amplifier.

Listening to Red Garland, Ron Carter, Philly Joe Jones’ easily accessible side one track “Solar” (a Miles Davis cover) from their 1977 album Crossings, you get the live impression that open-baffle speakers are known for. Ron Carter’s bass is speedy and hot, with actual placement in the soundstage instead of just rolling around on the carpet like many box speakers can portray. Red’s Piano takes its place back in the landscape, but never distant from the details, the AMT doesn’t deny passage to it’s upper register tones. Philly’s drum kit sounds like it should, moving from center bass to slightly higher and right on the snare. The X2’s present a great way to experience music of  the live sort.

If ever there were an experience that I’d use to initiate budding audiophiles into the hobby, it would be one like this. Where convention and ceremony are thrown out the window, and then that wall to what lies beyond the narrow window is revealed. If I ever get my hands on a pair of Clayton’s entry level O.B.S., you can bet on me taking them out into the real world. Just for the fun of introducing people to the realism of open-baffle speakers.

DENTER (PTA) — Kimber Kable, Emm Labs, Focal, and HeadAmp put together a two room suite that catered to both the stereo and headphone crowd. Wattgate and WBT both had static displays, as well as […]

The Latest Scoop OK folks, I’ve got your digital dreamboat right here folks, so step right up and see what it’s all about. That’s right, we’re talking PS Audio’s DirectStream DAC ($6000) and its sidekick, […]

by Mohammed Samji Definitive Audio in Seattle, WA. AudioQuest Let’s be honest, unless you’re an electrical engineer (like I am), power probably isn’t very interesting. But somehow Garth Powell, a lifelong audio engineer from AudioQuest […]