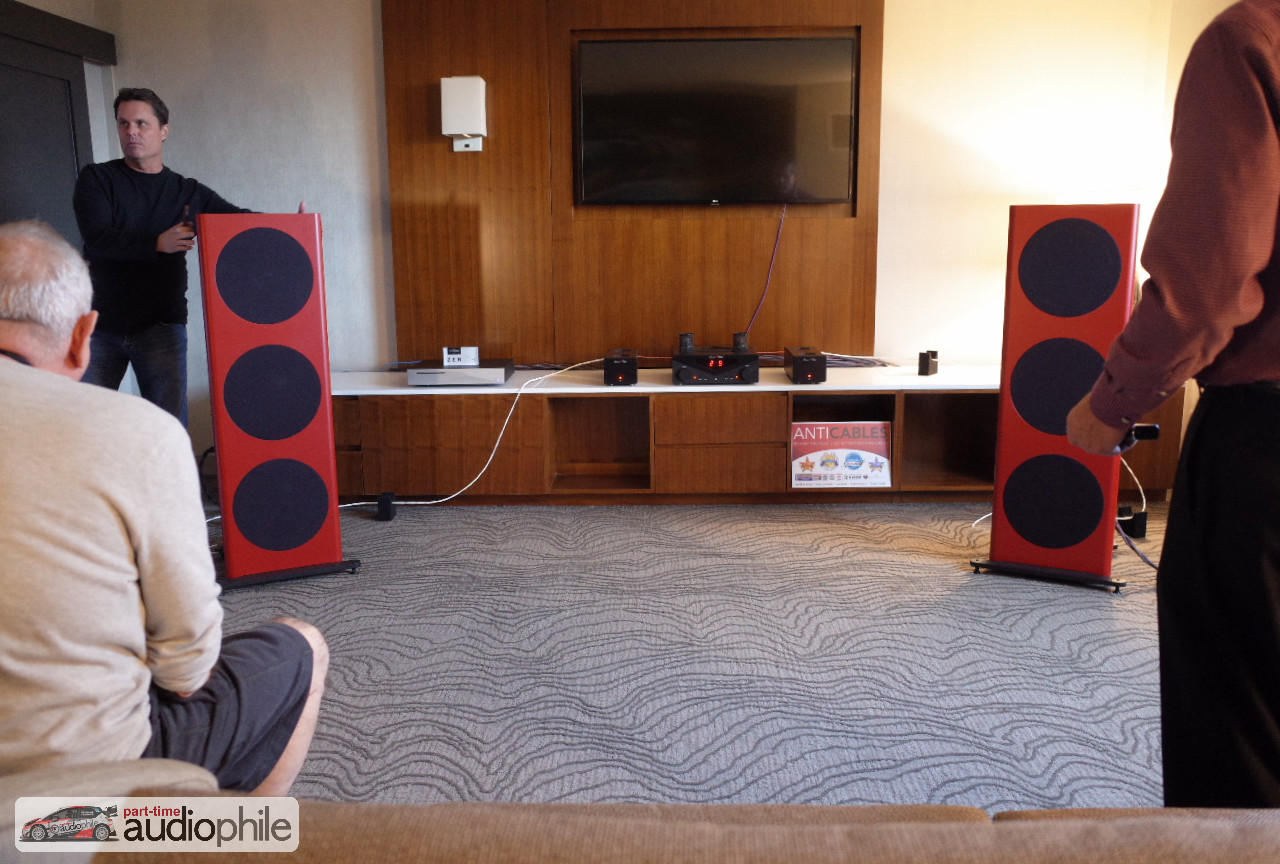 Starting at the source, the Innuos ZENITH which is directly a more affordable version of their SE model, and spiritually their reference Statement model. The ZENITH is no slouch by any means, — seriously, it has three linear power supplies, it is not a toy — but the ZENITH is also not the company’s most refined offering. I want you to know this, because I especially took note of this once the music started playing. It shouldn’t sound this good, but here we are and there it does. The ZENITH’s purpose in the Innuos lineup is to bring down consumer costs while still out-performing when compared to similarly priced in-market competitors. 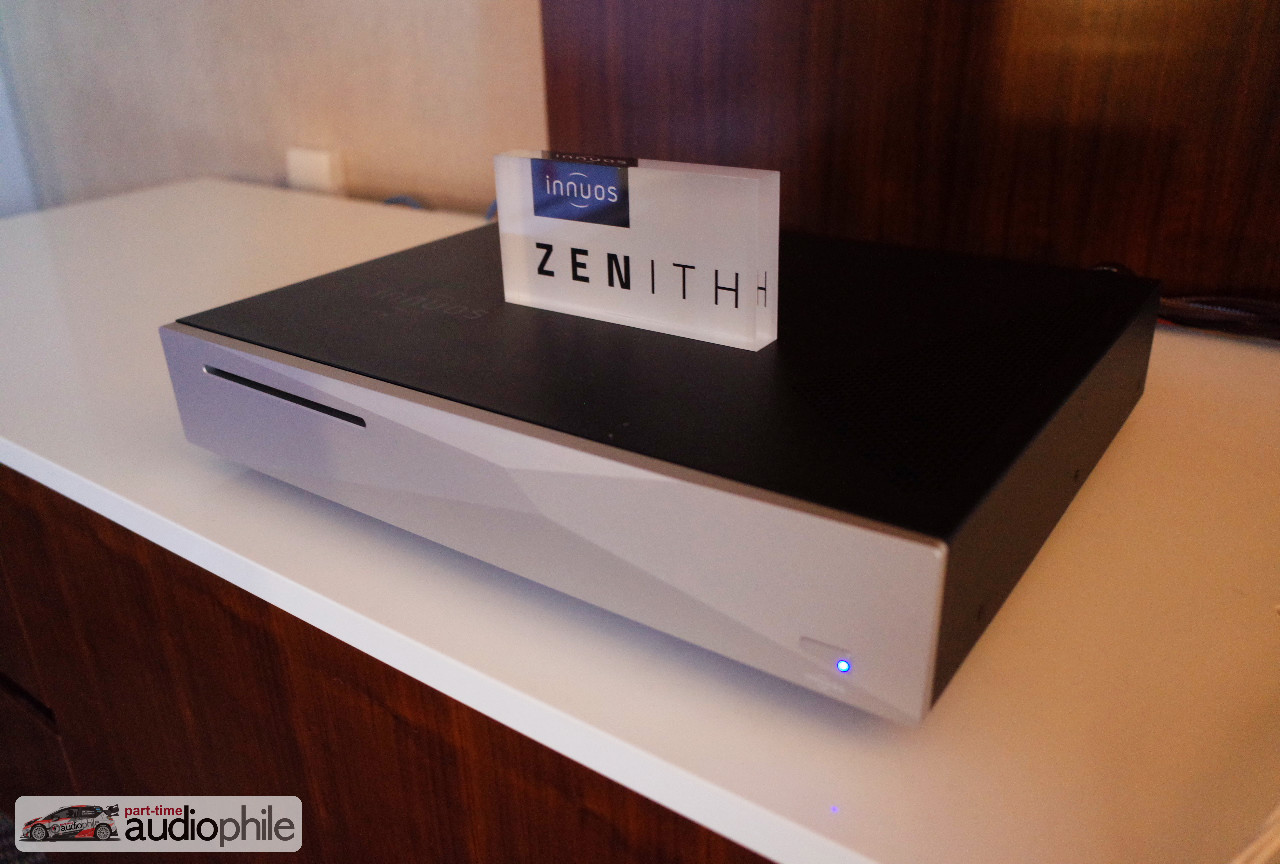 Then we come to Vinnie Rossi’s — NEW for 2018 — L2 Signature Pre-amplifier (starting at $14,999 USD) which is Class-A “ultra-wide bandwidth” directly heated triode (DHT) pre-amplifier, which means that instead of the run-of-the-mill output tubes we all know and love, the DHT design allows Vinnie Rossi to expand into more exotic and truthfully more fun, and yes… more expensive tubes. But who cares about expensive? If you do and you are here, you probably needed to turn around and go home whilst at the Denver Airport. 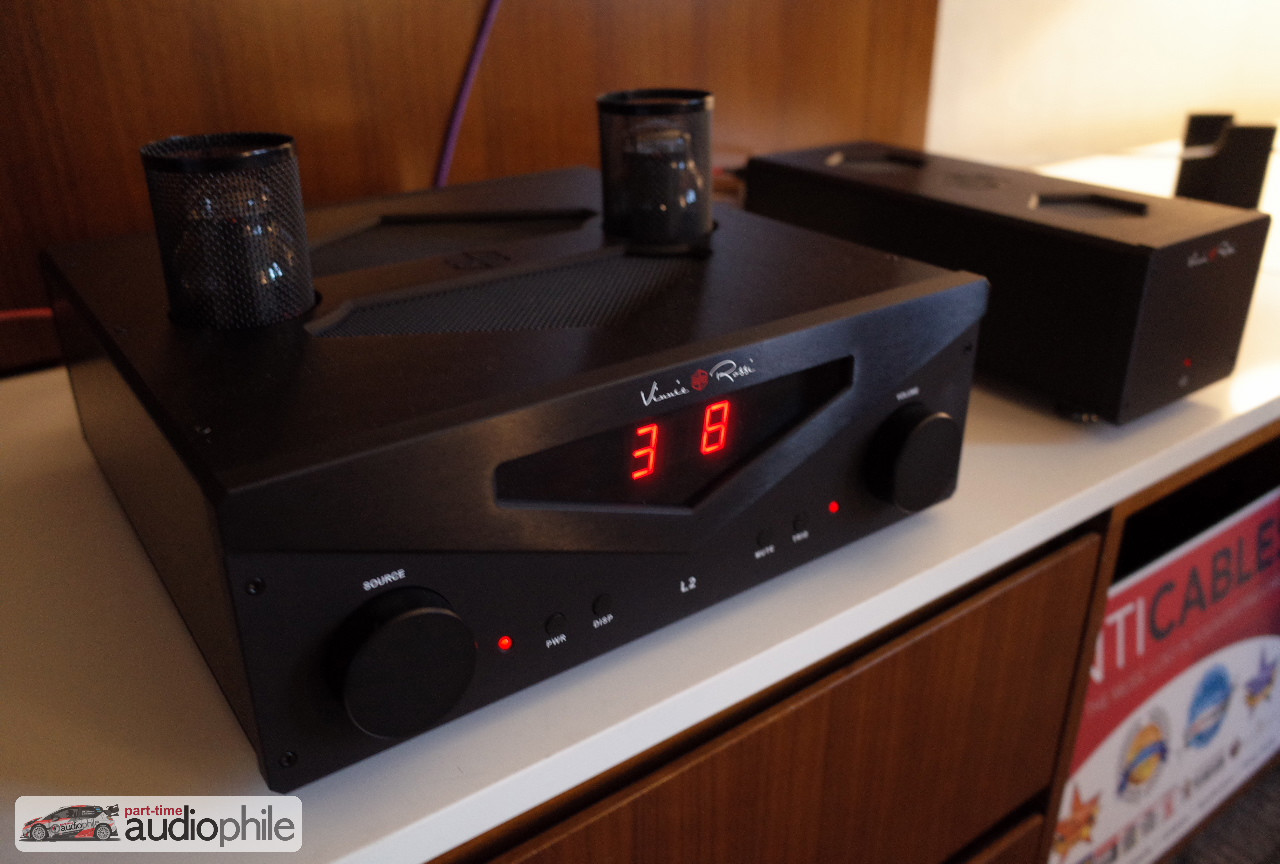 The L2 pre-amplifier is compatible with 2A3, 45, 300B, PX4, 101D, 205D, SV811 and other 4-pin HDT families of tubes, which means the tube world is now a much sexier place to be with the Vinnie Rossi L2 Signature pre-amplifier in it. More features include dual-mono power supply with Belleson super regulators, a discrete 64-step ladder volume control using Pickering England silent relays, and finally as an option — a DAC module at $3,495 USD that does 32-bit / 768khz, DSD up to DSD512, using dual AK4977EQ converters, a (of course discrete) Class-A output stage, buffer and re-clocking, and more stuff I don’t understand, otherwise I would be doing and not writing.

The L2 Signature Mono-block Amplifiers at ($14,995 USD) are not as complicated to understand. They are Class-A/AB Mosfet in topology, output 75 watts into 8-ohms, and 140 watts into 4-ohms — and before you ask — yes they are 2-ohm stable. Power supplies are taken directly from the US Navy’s Seawolf Class of submarines, okay, okay, maybe not true, but it sounded good. Are you still awake? — 100,000uF of low ESR power supply rail capacitance and each with a custom-wound 500VA power transformer. Wrap it all in half-inch thick aluminum, and slap the rear with a few WBT and Neutrik connectors, and now you’re in business.

Now we come to the part of the story where doubt, bias, and “speaker bigotry” enter the scene. Open baffle speakers have a history of being either A) a DIY thing B) a sound not for everyone C) a gimmick. With all of that “history” hanging over the heads of guys like Clayton Shaw (and others) who are making a legitimate case for open baffle loudspeakers to be taken seriously in certain hi-fi circles. Not only does Spatial Audio have to impress, they must impress against bias. Have they done so in recent history? I would say yes. But only to a point. They’ve made a splash in terms of refining what was once almost entirely a DIY hobby and of course for those who have already accepted “the DIY open baffle sound.”

The biases I have encountered against open baffle speakers run deep, and typically because in the upward battle of changing minds, I don’t think we’ve ever had an open baffle speaker reach the heights of Best-In-Show sound in the audiophile historical record. Think about it. If you’ve only ever compared to what sounds “good enough” in the pickiest of hi-fi circles (be them press or show attendee) then you’ll be seen as having limits, and therefore a gimmick. All of that is about to change.

The Spatial Audio Lumina L2 (starting at $25,000 USD) is a 3-Way, open baffle, servo dipole loudspeaker featuring a top mounted 96db sensitive X32 Coaxial driver (that’s 12-inches of mid-range, and a 1-inch exit compression driver). Dual 12-inch servo controlled woofers (per speaker) which are self-powered and corrected by mono-block servo amplifiers. Impedance is the nominal 8-ohms, with a 6-ohm minimum, and at 48-inches high and 150 lbs each, they are no more intrusive than a pair of stocky 5th graders (sans the cell phone bill). 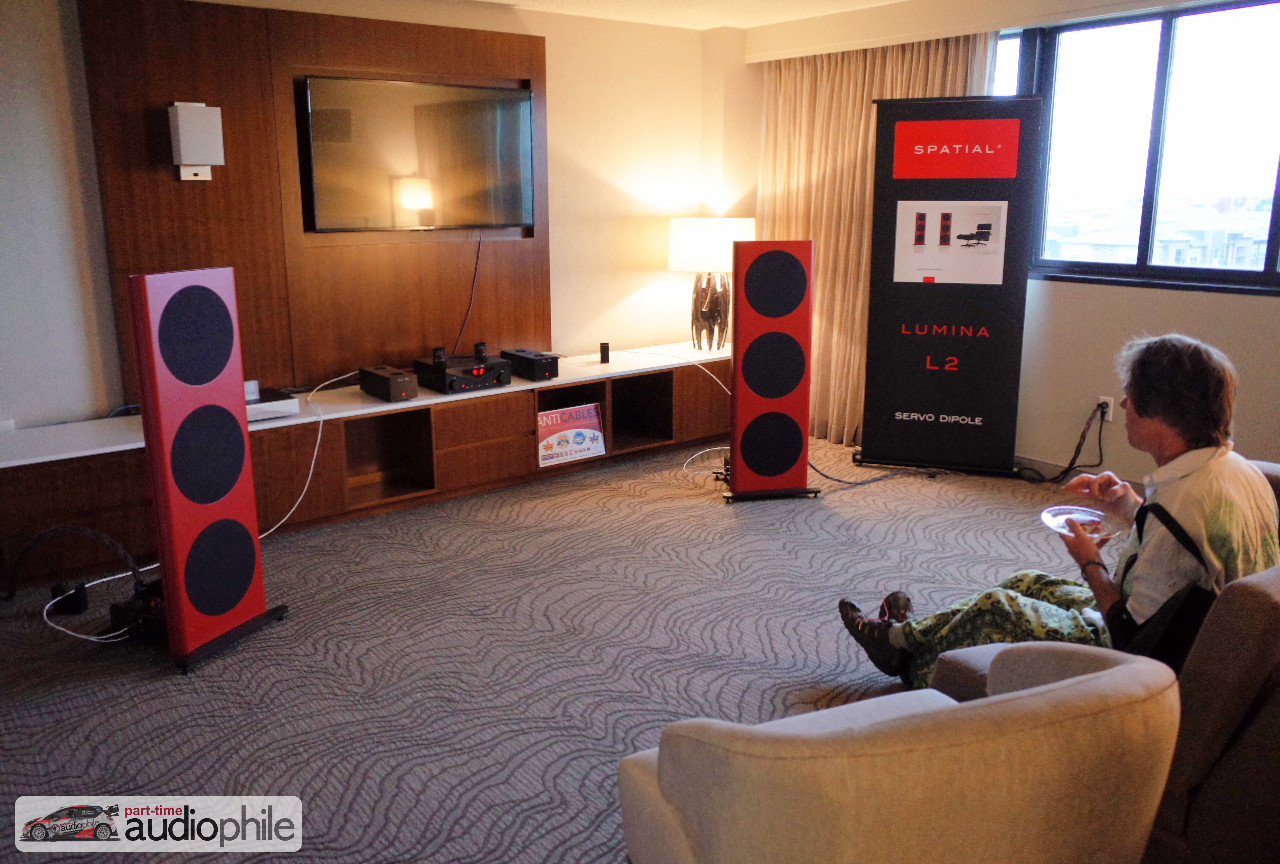 The Spatial Room was a great way to end a mediocre Friday for me. I had made my way up to the 11th floor and down the shifty stairwells during my first quick pass, all the way down to Room 3018 before I really heard something to get excited about. It’s rooms like Vinnie’s and Clayton’s that really are “the energy” for that audio show feeling. You are either excited about them and sit for way too long listening and making requests, or it sets fire to your feet and you are now on a mission to find better or similar rooms to sonically wrestle away your opinions. I was feeling a bit of the former.

What I was hearing my first go round was the bass. Gone was the boxy boom. Bass was massive and natural — and by natural I mean it was like real thunder, not a facsimile, or one of those pesky apartment neighbors who just got “Sub-Woofer: The Movie” on Blu-Ray. This was a rumble that seemed like it entered the room from out in the real world and gave no mind to the walls and windows in it’s way. I like to think of this as bass scale. The servo subs, had this in gobs.

Bass is more than just thunder however, and where bass becomes musical I found the speed and immediacy of the servo controlled bass section to be damn near perfect, and for what I feel is a credit to the open baffle design, still on that higher scale than what box speakers can provide. None of that pulling-in that box speakers do when going up the frequency range. Speaking of servo bass, I lack the understanding of why more speaker builders don’t take advantage of this technology. It is corrected woofer performance, and I get that it is possibly just a matter of designers not knowing how to do it, but it surely would solve a lot of problems that speaker manufacturers have when it comes to system electronics matching options for the end user.

I leave the Spatial room, knowing I will come back Saturday with more exhibit room experiences under my belt. Saturday arrives and I’ve already met a few people who were impressed with Room 3018, and a few that were less than willing to have me drag them down to hear a Spatial open baffle speaker. But I insisted, and I can be quite convincing. Upon my return, I listened longer and deeper (much like the misses prefers), and I gained a few new impressions. The mid-range and treble was as effortless as anything I had encountered this year at any of the shows. Not to say it was out-right the best, but it was spooky in how it loaded the room and held voices inside the image when needed but allowed the vocals to show space when the recording demanded it. Again, a scale thing.

After leaving the CanJam with my new friend (and bromance) Jameson, we made a B-Line directly for Spatial, room 3018 as he had not heard them yet. Immersion was his impression, and considering we had just left the CanJam, he was right. Nothing loaded the room like these open baffle speakers did. Jameson couldn’t stop smiling because in his experience so few b ox speakers could engage the head-fi community for their lack of immersing the listener in the music, without all of the room interaction. Here with the Spatial Audio Lumina 2, we were experiencing just that. The immersive head-fi experience, but now in-room, and with bass you can feel in deep down in the lungs.

One of my reviewer friends who came to meet me at this room also noted that he couldn’t believe this sound was coming from AntiCables. Take that however you will, but I reconcile that to mean that maybe we’ve all been underestimating how good they are because of our own biases.

When we talk about Best-In-Show sound, I can’t help but take into account that what I heard here at Rocky Mountain Audio Fest is not only a few extra inches of performance, but a few feet worth. How many other speaker and electronics brands can admit they’ve made those kind of gains?

All cabling by AntiCables