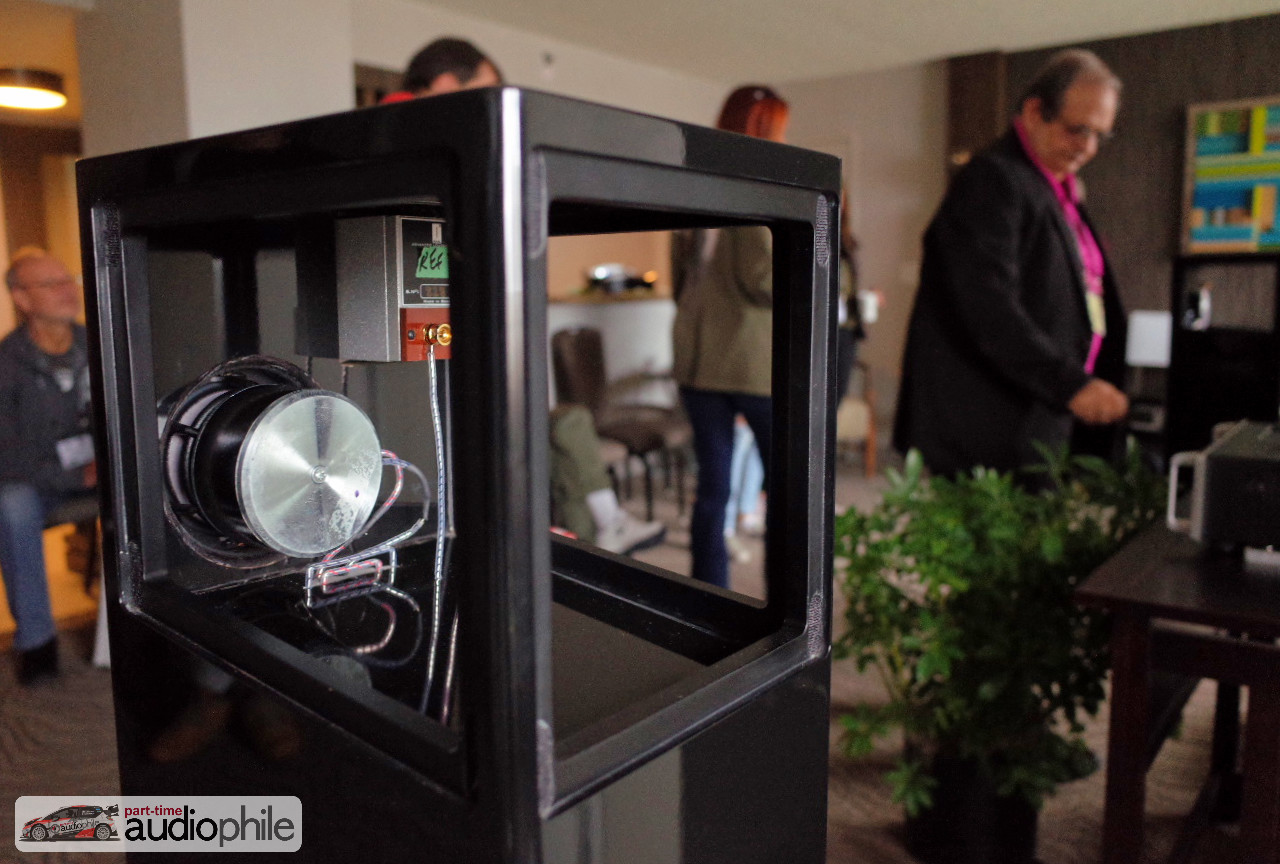 It is almost impossible to visit every room at an audio show. To do so would require running shoes, twenty-something knees, and a stopwatch for limiting your listening window to only two minutes. Now with my excuses firmly in place, I want to take the opportunity to mention, that before this day at Rocky Mountain Audio Fest in 2018, I had not reserved the requisite time to dedicate myself to in-action and listen to Nola speakers. 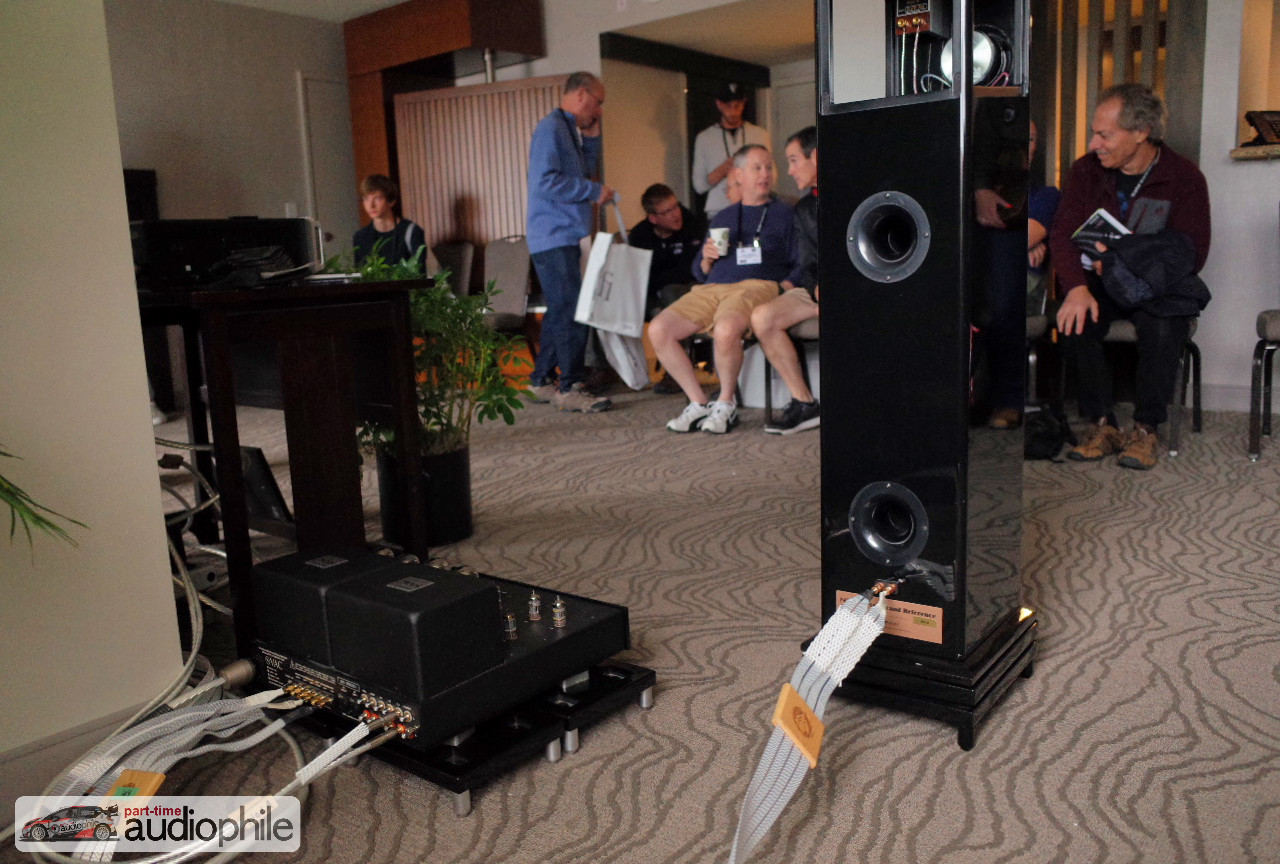 Accent Speaker Technology is Nola, and I don’t know any other way to put it. Nola builds stereo speakers that differ from most of the pack here on display at RMAF, or anywhere for that matter. Today I am reporting on the newest production version of their much heralded Metro Grand Reference Gold 2 ($40,000 pr USD).

At first inspection, the bass section of this new speaker looks rather conventional; containing two woofers with considerable distance between them, multiple ports on the rear of the cabinets, and four enclosure walls. This is where convention however comes to an abrupt end. The mid-range and treble drivers operate in an open-baffle dipole loading. Becoming popular for many reasons, this style of driver loading helps eliminate resonances within the cabinet, from the cabinet, and the drivers themselves. The Metro Grand Reference Gold 2 still has a framework surrounding the open baffle that gives it the appearance of a being conventional box speaker, but with the acoustically transparent grills removed, the upper section of this speaker reveals that its side and back walls are indeed open.

Powering the whole affair was a simple and elegant VAC Sigma 160i Integrated amplifier — which isn’t the most current offering from VAC — but still provides a powerful 80 watts per/channel in stereo through a pure class-A line stage. An Audio Research CD player served as our only source, and from there everything was tied together with ribbons of Nordost cable. 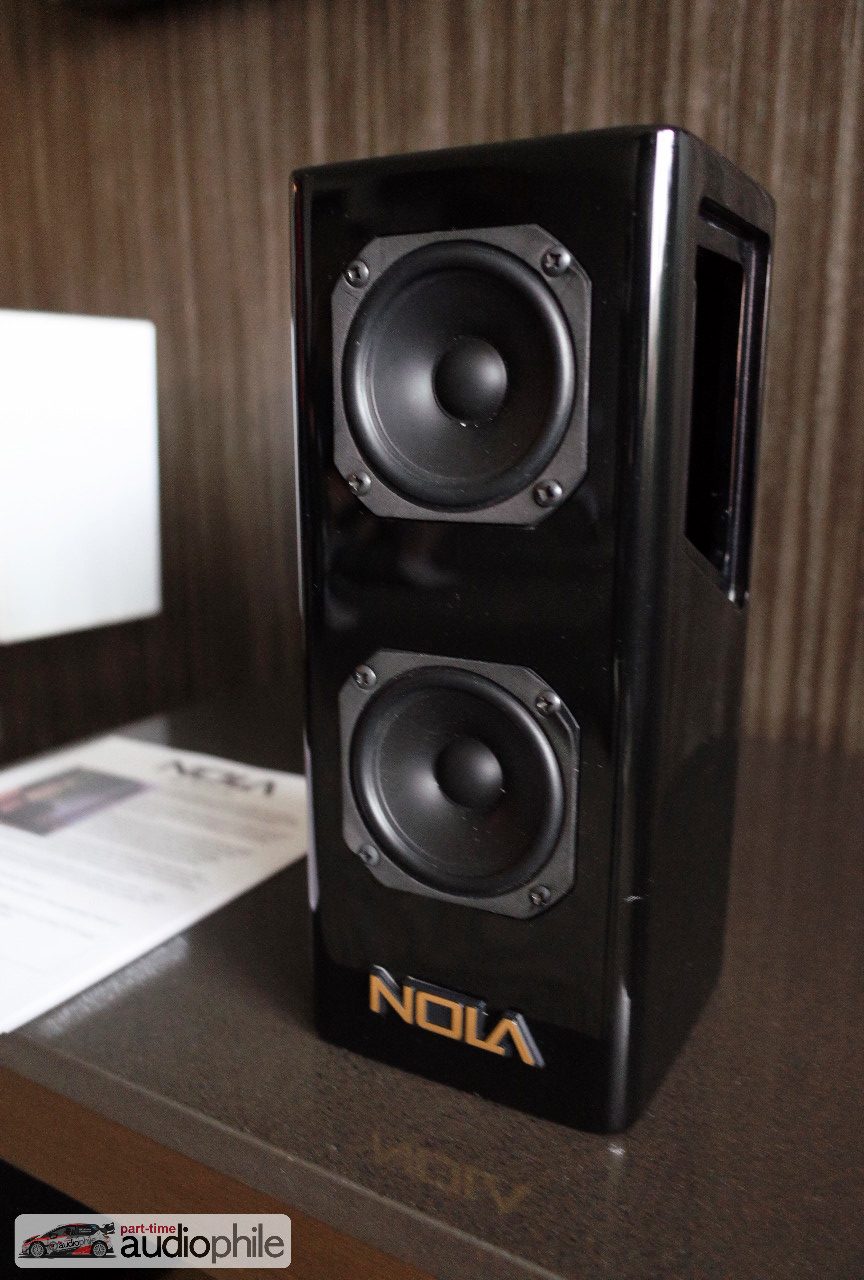 On static display was Nola’s Brio Trio, a three-piece high-end speaker system that employs a “1-1/2 way” loaded monitor. The monitor is compact and features identical 3-1/2 inch drivers, the upper; loaded in Nola’s signature open-baffle configuration, while the second (and lower) driver is loaded into a rear-ported enclosure. 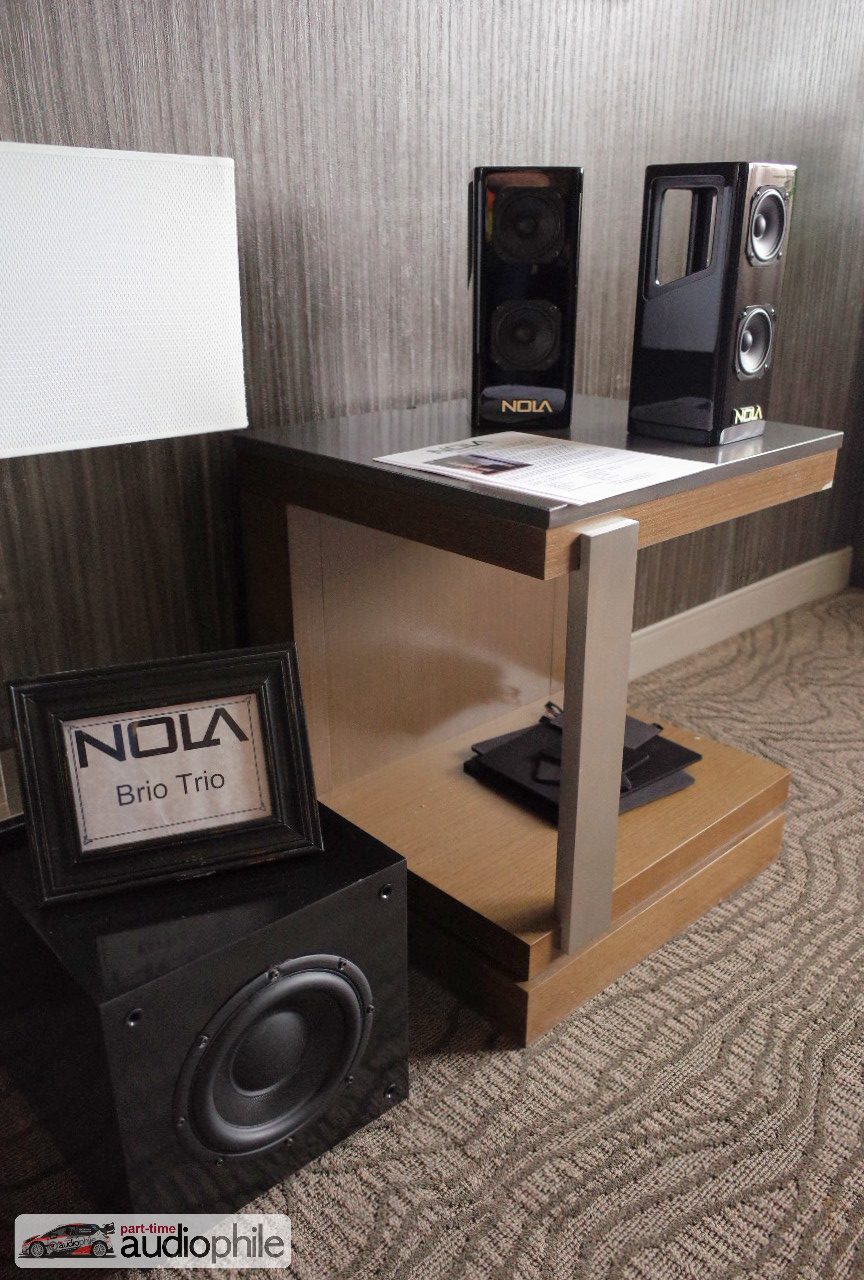 An 8-inch powered sub-woofer rounds out the lower frequencies, and is powered by a stout 250 watts of class-A/B amplification. The amplifier is similar to the one used in the Nola T-Bolt system, however in this iteration, just smaller. The sub-woofer features continuously variable level and crossover frequency controls (from 40Hz-180Hz, 24dB/octave), 6dB at 35Hz switchable EQ, a phase switch, line-level and speaker-level inputs, enabling it to be seamlessly matched to the Brio main speakers. Available in gloss black (as shown) for $3,500 USD. 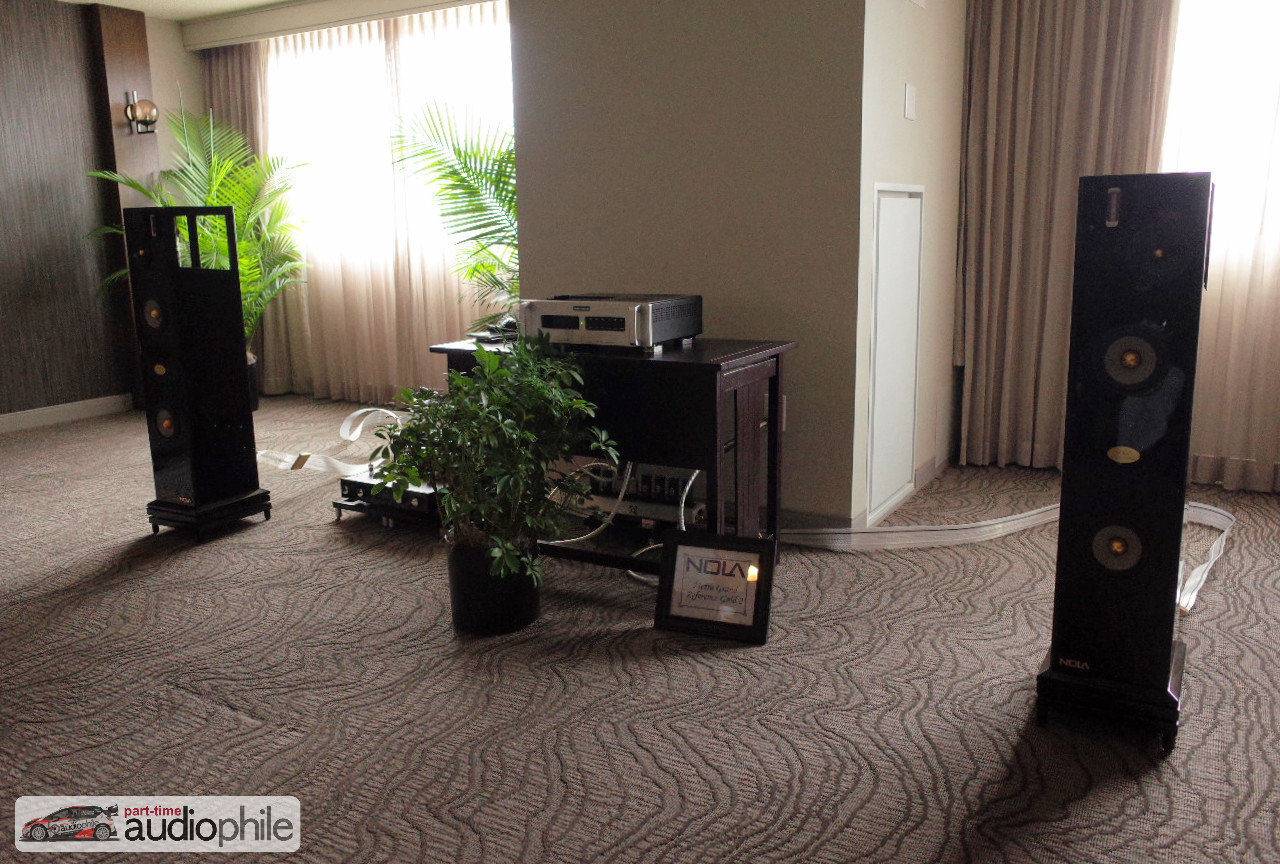 A big band fired up before I could take my seat, front and center of the listening space. Glorious horns wailed, drums snapped, and piano keys hammered away. Immediately the first three thoughts that came to mind were, 1) “is this a live recording?” 2) “it sure sounds live.” 3) “these speakers sound live.”

The architecture of the hotel offered each speaker its own room to use for the back-wave, broadening the audible display even further, but possibly not ideal. Imaging was still tight, and as I moved around from one seat to another, I was surprised at how well the off-axis response sounded. Eventually I found myself standing again, snooping around the rear of the towers, taking photos and listening with my eyes, looking for some clue as to how the new Metro Grand Reference Gold 2’s were making this simple hotel room sound so much like a live venue.

Returning to my seat, I began listening for texture and tone, thinking that nothing can be perfect, as compromises are the rule of great engineering. I listened for many things good and found them, listened further for things bad, and found myself in waiting. Bass transients were speedy, and cohesion between all four drivers was remarkably seamless. I credit that cohesion to what I have heard (and read) about the updated “Unison” crossover design that now inhabits all Nola speaker models.

The usual listening experience is filled with nuances that force us to tear apart (and down) the music into smaller compartments to be judged and discussed against subjective and objective preferences. None of that seemed applicable here, as what I was hearing was unlike anything elsewhere at the show — it was live sound. I’m not trained to argue against the live sound — and how could I — as it ultimately is what we as audiophiles mostly claim to be in search of.

The Nola room easily forced its way onto my list of Best-In-Show exhibits, by way of destroying convention, and for sounding as convincingly live as anything I’ve encountered. Well done! 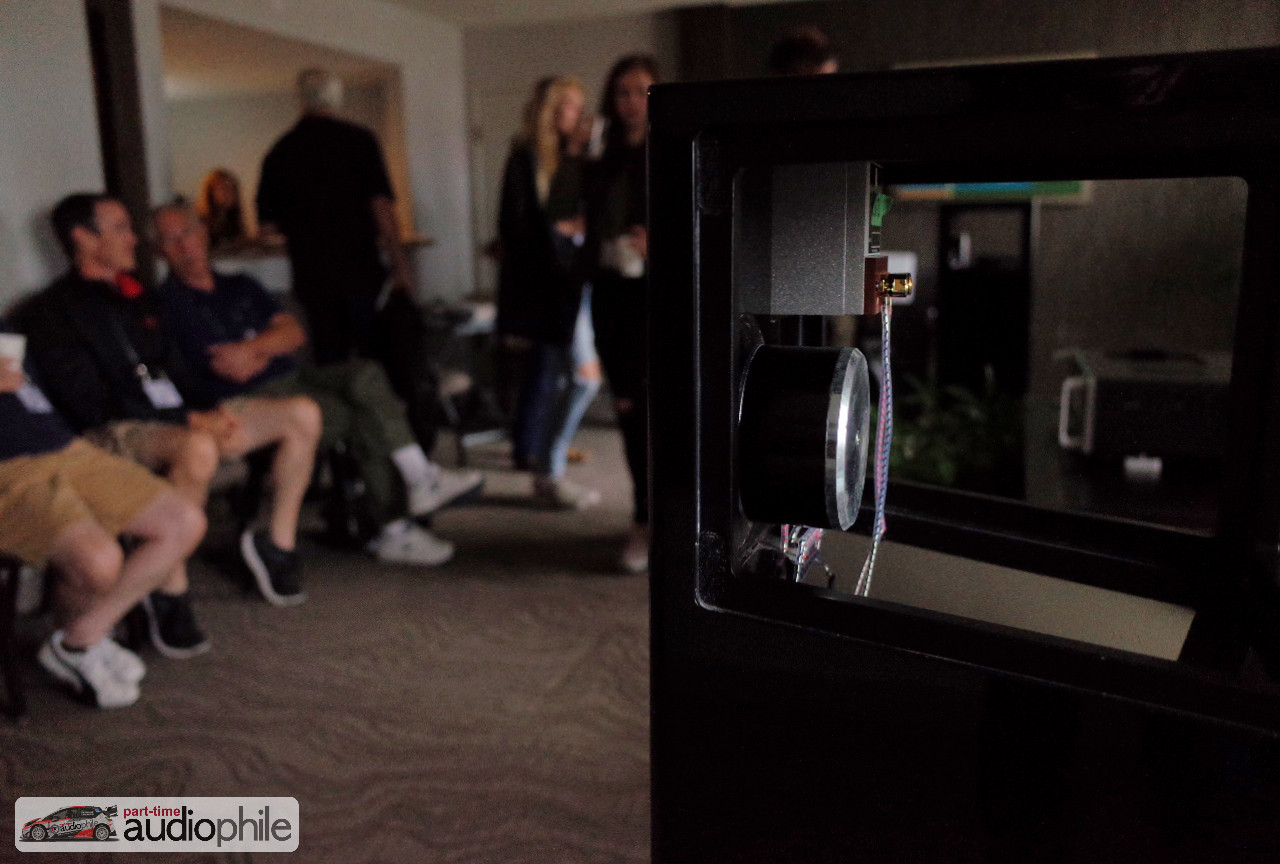 All cables by Nordost

Nola speakers don’t look like anything else. In my experience, hearing hundreds of different transducers at shows each year, they don’t sound like anything else, either. Visually, putting Nolas in your room is something like […]