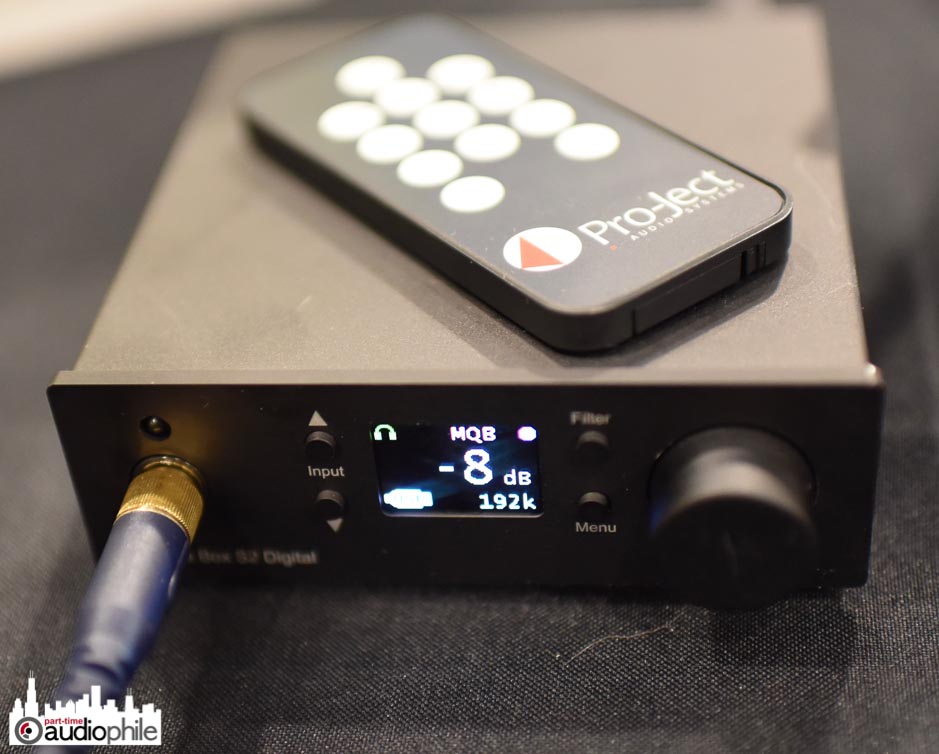 About a week or two before RMAF, I started getting press releases and one in particular caught my eye.  MQA decided to hold a live event with a jazz ensemble in London during the show and stream it real-time to nearly a dozen MQA-equipped rooms.  The Misha Mullov-Abbado Group would play live in London and we would be able to decode the MQA stream for full MQA quality.  As I was overwhelmed with room coverage, I completely forgot about it until the morning of the event.  To kill time before the event, I stumbled into CanJam and ran into Jeff Coates from Pro-Ject after visiting a few booths.  Fortunately, Pro-Ject has their terrific and tiny $399 Pre Box S2 Digital box which was connected to a nice collection of headphones.  Jeff and I had some nice discussion around the new StreamBox S2 which is a bit of a Swiss Army knife of boxes.  A few minutes later, the MQA Live event started.  The sound was terrific.  Despite the modest cost, the S2 Digital served up quality jazz.  The jazz was very good and very natural.  The group includes James Davison, Jazz Young Musician of 2018.  I was impressed by how good the sound was while being streamed in real time from London no less.  There was a nice bit of “air” between the instruments.  It was a very enjoyable listen.  Pro-Ject continues to impress with great sound for modest money at their CanJam booth. 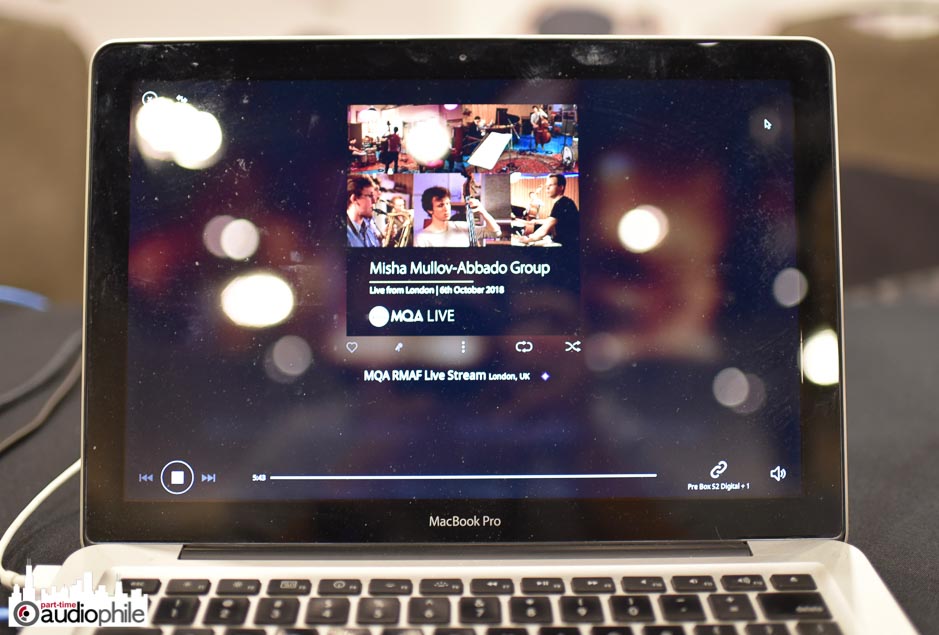 Shortly after this, I headed up to the “tower” to see Buzz Goddard who had the more expensive but still affordable gear in Room 8000.  The main system featured the compact Pro-Ject DS2 electronics and Sonus Faber Sonetto series loudspeakers. According to Jeff:

The Pre Box DS2 Digital is the heart of this system, with a built in DAC, BT Audio receiver, and MM.MC compatible phono preamplifier. The PreBox S2 Digital was used as a DAC for MQA decoding and for playback of digital files served up by Roon and delivered wirelessly to the StreamBox S2 Ultra Roon network endpoint.

Anaolg duties were handled by the award-winning RPM3 Carbon and Sumiko Blue Point No.2. When placed on a solid base, there’s simply no better turntable/cartridge combination available for under $1000

Amp Box DS2 provided plenty of power and control for the Sonetto III loudspeakers- this amplifier features Hypex output modules for stable operation into even difficult loads, and it handled the four-ohm Sonus fabers without complaint.

The entire system price is just under $11,000, and with the exception of the Gravis II subwoofer, is made entirely in Europe

I thought the system looked great.  The Sonettos and Pro-Ject electronics were a great match and the bass was quite nice. The wood panels on the side of the Pro-Ject gear looked nice between the gorgeous wood finish of the Sonetto speakers and the matching subwoofer.  The leather top cover of the subwoofer was a nice touch by the Sonus faber artisans in Italy. 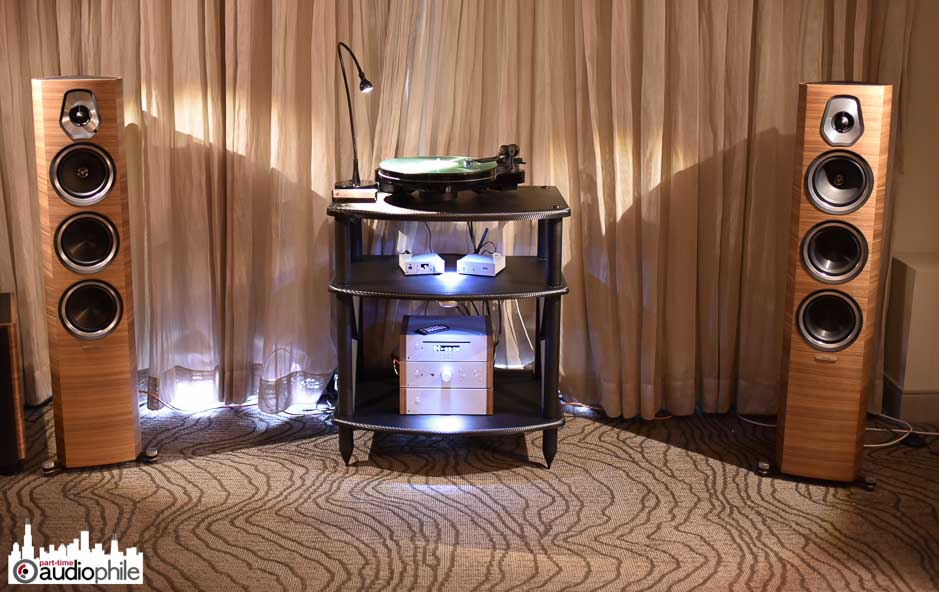 More importantly, the sound was really terrific.  We listened to Paul Simon’s “Diamonds on the Soles of Her Shoes”.  I found the resolution to be very good and the horns had a beautiful clarity.  The digital was certainly getting it done.  Next we moved to the RPM3 turntable and played Morphine’s Cure for Pain which was excellent.  Even better I asked to hear Peg on the Cisco pressing of Steely Dan’s classic Aja.  Vocals were spot on and there was a good sense of rhythm and drive.  Great sound for an analog rig under $1K all-in.

Another outstanding showing from the team at Pro-Ject! 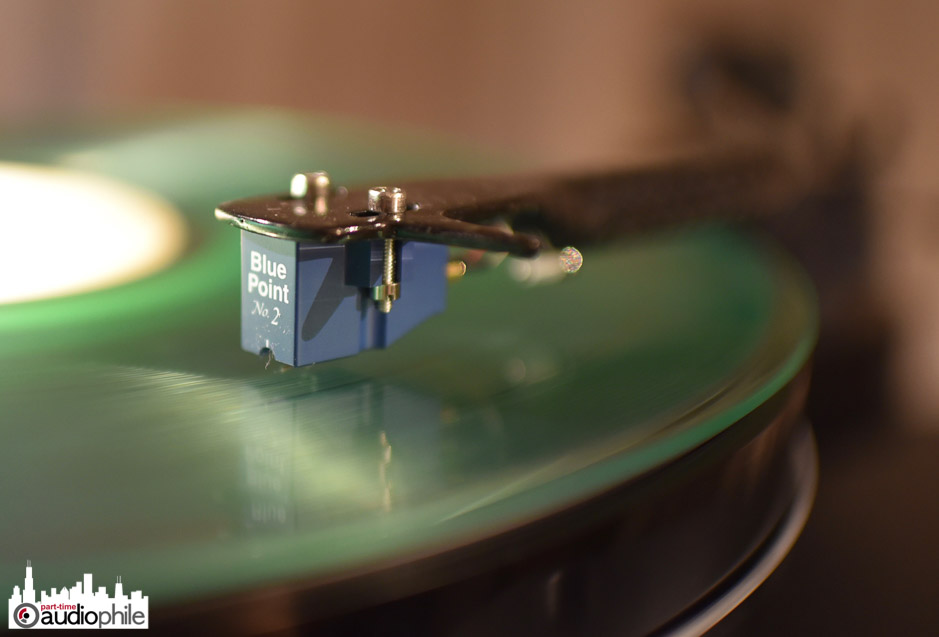 Components on display in Room 8000

NEW YORK, NY (PTA) — The McIntosh Group, which includes subsidiaries McIntosh Laboratories and Sonus Faber have agreed to a development partnership which will see both high-end audio brands returning to the luxury automotive market. […]

Nothing but the truth Should audio components always be 100% truthful to the source? Ahhh, that’s one of those questions that has resulted in untold audiophile angst, much like the supposed supremacy of analog over […]

At first it sounded like a great idea. A few months ago, Bryston Audio (website) asked me if I wanted to review the newest version of their truly iconic power amplifier, the 4B. They […]