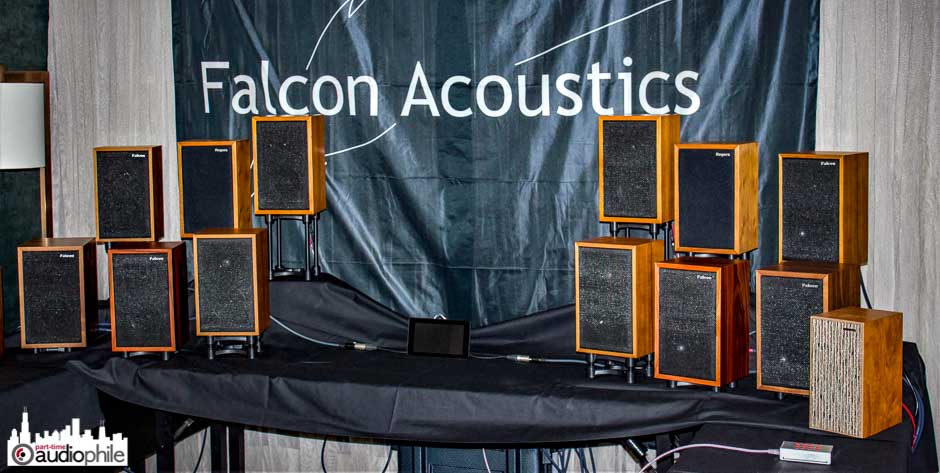 I’m a huge fan of the LS3/5a…are you? If so, you probably know all about Falcon Acoustics, the only manufacturer licensed by the BBC who is continuing to produce the original 15 ohm LS3/5a design in 2018. Falcon, located in Oxford, England, manned three rooms at the 2018 Rocky Mountain Audio Fest—one that featured a simple set-up around their LS3/5a ($2995/pair), a larger room focused around their new tower speaker, the Reference GC6500R ($26,000/pair), and an incredible third room filled with LS3/5as from different makes, vintages, crossovers and impedances. Listeners were invited to demos where the folks at Falcon compared each model and determine how close each came to the true LS3/5a spirit.

I didn’t get a chance to listen to the comparisons in that last room, even though it sounded like something I’d really enjoy. But I did find peace and solitude in that first room where beautiful music was delivered by a very small and simple system—LS3/5as, and a Primare integrated amp and digital source.

It’s hard to make Shelby Lynne’s Just a Little Lovin’ sound anything less than spectacular, but with the Falcons she sounded just a little more immediate, a little more delicate and ever so natural. It’s been a long time since I’ve heard a pair of LS3/5as sound this full and open. I heard someone in the room mention that the Falcons remind him of the great LS3/5as of the past, but I felt that they took another step forward with a less-congested midrange and a more linear response toward the low end.

The larger room, bathed in a magenta light, featured the GC6500Rs paired with loftier Primare separates. The Falcon References are a vented three-way design with a ribbon tweeter and bass units that feature their new Graphene-Enhanced Nano-Platelet Cone, which is far lighter and rigid than conventional cones. The gorgeous cabinet, by the way, is hand-built in Italy.

While listening to Mark Knopfler’s Sailing to Philadelphia, I felt that the sound was large yet precise, with powerful and potent bass impact that wasn’t hindered by the relatively small room. The top end was particularly smooth—lately I’ve been leaning toward loudspeakers with ribbons tweeters for that very same reason. The Reference is coherent and seamless from top to bottom.

That said, those LS3/5as would be more than enough for me. I can easily imagine curling up in front of a fire, sipping coffee and watching it snow through the window while listening to these little gems. Speaker designs tend to age less well than say, amps and turntables. But the LS3/5a, especially this one from Falcon Acoustics, is calling my name.

With all this talk about women in audio, I wonder why more isn’t said about Danielle Manger of Manger Audio in Germany. Her loudspeakers are innovative–check out that unique Manger Sound Tranducer, which is at […]