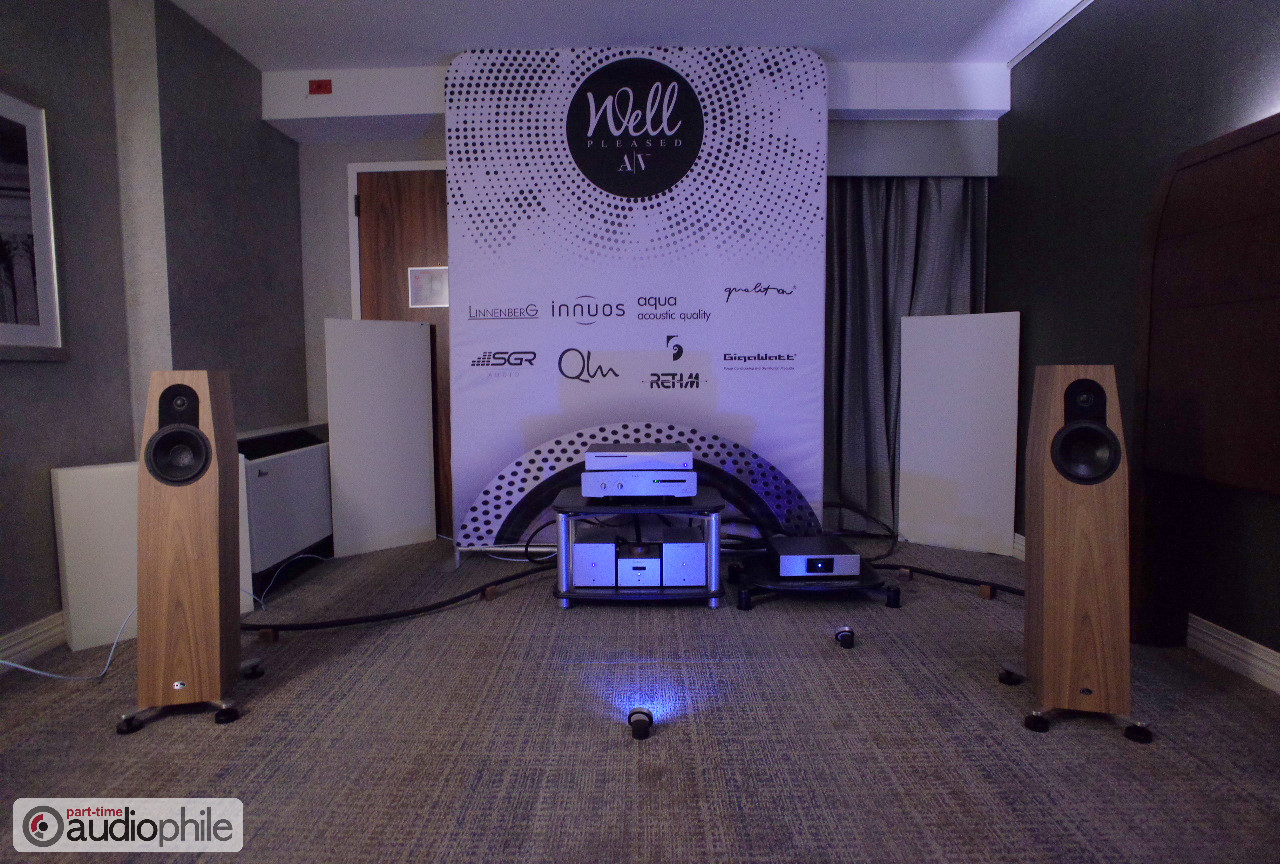 LinnenberG shows us that Ruhr valley sound, QLN gets our name right, Aqua Acoustic Quality goes all optological on us, Innuos gives us our moment of Zen, GigaWatt whips the power into shape, SGR HiFi Racks hold things up and yet still get us there on time, and Swiss Cables leave no holes in the signal. 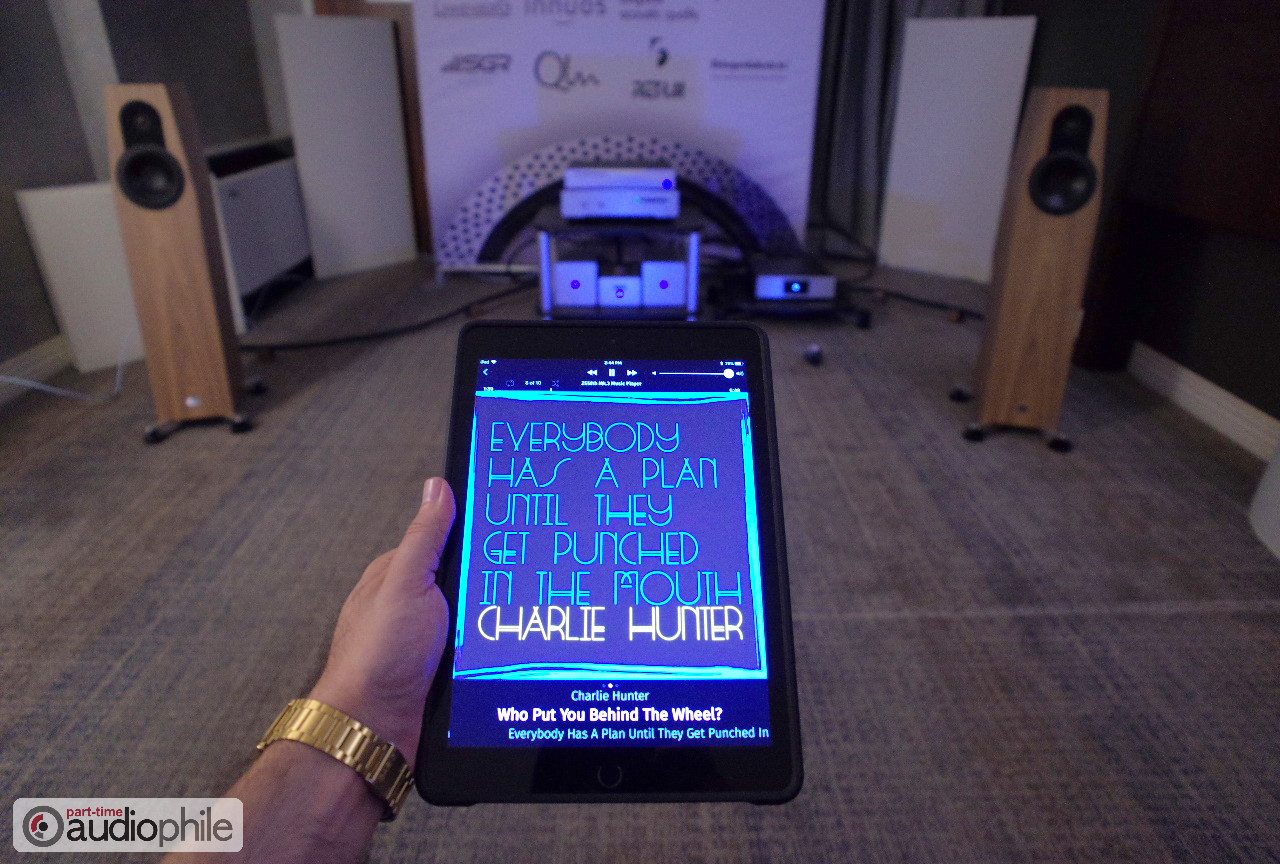 The room could be best described; A seven brand volley of sound, from American “super-distributor” Mark Sossa at Well Pleased A|V. What Mark does to curate the best gear around is still a mystery to me. His demonstration rooms are consistently standout performers of the audio show circus circuit. I tell Mark, “You’ve got a knack for room set-up and system building.” To which he replies, “It’s not me dude, it’s the gear.”

Mark, though still talented as ever in my mind, is right. It IS the gear. He’s taken aboard the best in sound the outward world has to offer. We often scratch our heads and wonder where he finds these brands, but man — he’s killing it. More and more I see Mark’s brands in dealer showrooms, now becoming ubiquitous names around the various hi-fi knitting circles. 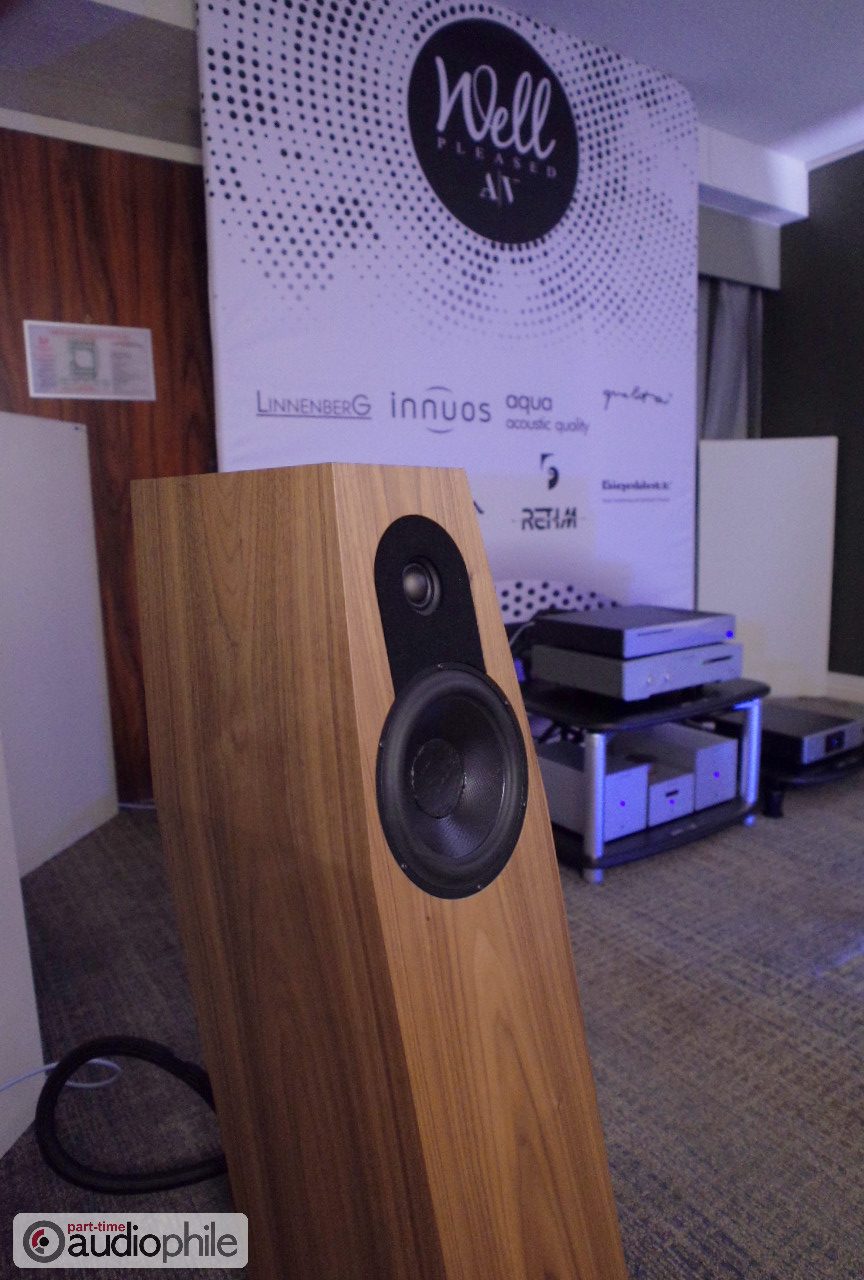 Of note to me this go round with Mark was the QLN loudspeakers, which have dealt with their fair share of confusion around the name. The scripted QLN logo looks like “Ohm”, but be assured, it’s QLN. After hearing the new QLN Prestige Three floor-standing loudspeakers, I doubt I’ll ever forget the QLN name. A clean looking (and sounding) two-way speaker with easy to drive specs and easier to look at… looks?

More familiar to me by sound, the LinnenberG brand of electronics. The LISZT monoblocks employed in the room may look svelte like the speakers, but in tandem with the QLN Prestige Three speakers, the sound was more than convincing of its muscle. The LISZT monoblocks are powerful at 200 wpc (8 ohms) and embody the German characteristic of being overbuilt on paper, and then achieving every single engineering spec perfectly. 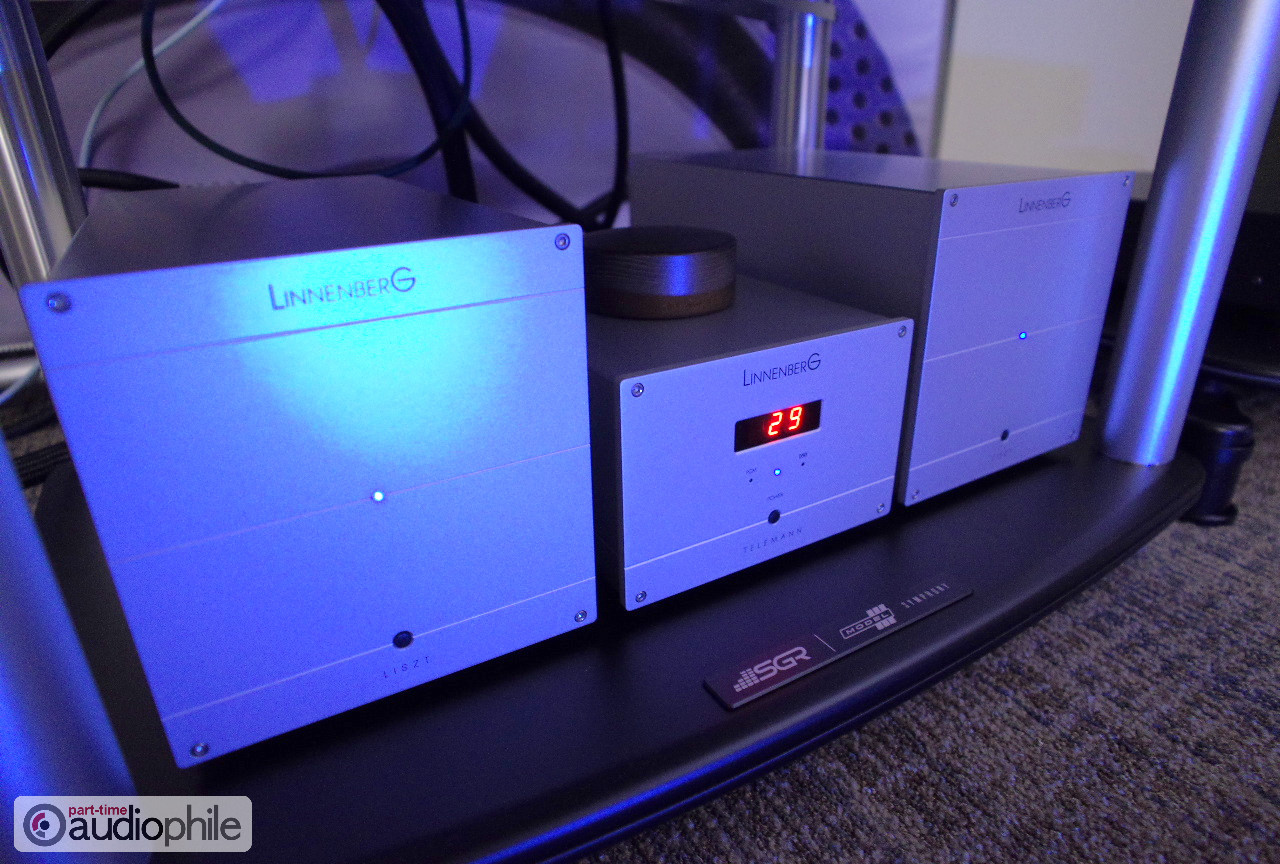 Unbelievable frequency extension, depth of sound-stage, rich tones, and detail with a side of detail. Only those with the most discrete megabucks systems would have anything to turn a nose up at. Mark Sossa is to credit for having the ear necessary to curate such a grand and value rich stable of product lines.

Versatile at everything we played, the Qobuz tracks compared well versus music we had banked or from Tidal. I took the reigns of playback and dialed up many songs before feeling guilty for hogging the system.

The component lineup on-hand from Innuos and Aqua represent some of the best in digital playback I can think of. Yet, these aren’t even the highest offerings from either brand. It becomes hard to discern which component is the star of the show (room) ultimately, and I guess that’s the kind of aporia that Mark welcomes to all who listen. 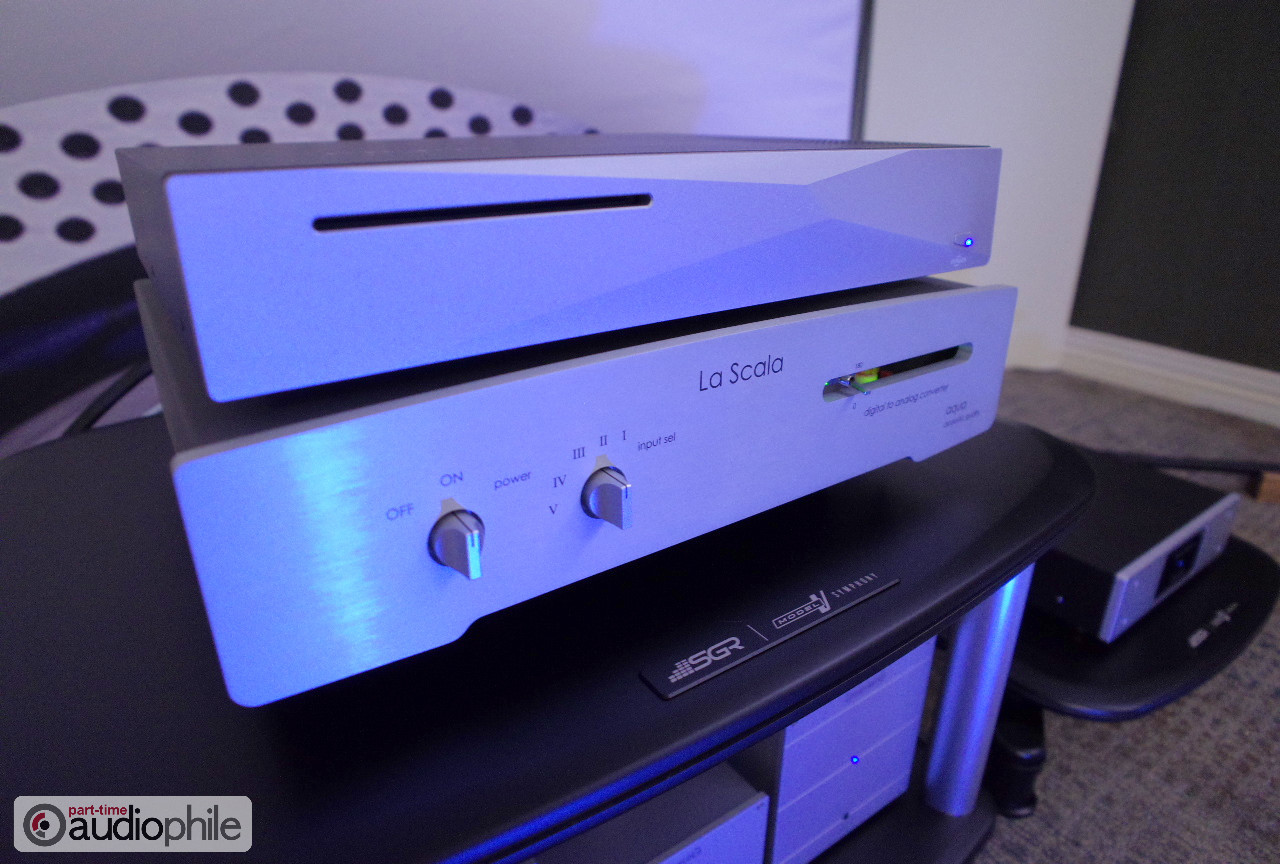 All cabling by Swiss Cables

Pro-Ject was on site demonstrating the EISA-award-winning combination of Roon-enabled network endpoint (StreamBox S2 Ultra) and MQA capable DAC (PreBox S2 Digital) with two sets on hand for listening. In addition to the streaming and […]

I have to admit the hallways at the Denver Marriott Tech Centre were starting to collapse inward like a spiral tunnel, and I felt like my legs were running through thigh-deep water by Saturday afternoon […]