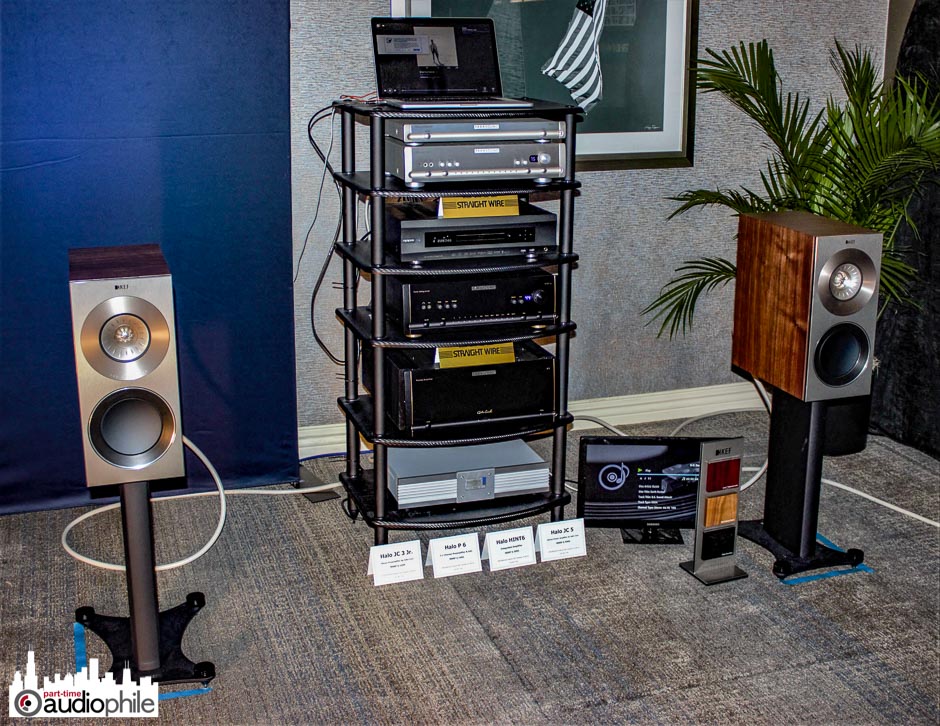 “We’re going to start off Saturday morning with some RAWK!”

Mornings at high-end audio shows, at least the first hour or so, are usually dedicated to quieter music. The hallways haven’t quite filled up yet, and many of the exhibitors are still nursing hangovers from partying the night before. Okay, maybe I’m generalizing here, or at least bringing a few too many of my personal experiences into it. But heavy metal at 10am?

Kick Out the Jams

KEF (website), along with the folks at The Audio Hunters and The Vinyl Revivers says yes. Perhaps the biggest reason why they chose the strong black coffee approach to the morning was the new KEF Reference I ($8000/pair), a smallish bookshelf speaker that makes some big, powerful sounds—perfect for Saturday morning RAWK.

Powered by Parasound amplification and connected with Straight Wire, the Reference I started off with all that midrange magic you hear from the company’s deservedly ubiquitous LS50s, but then added a mountain of slam at the lower frequencies. My notes say something about KEF and JBL having a baby—these might be the perfect loudspeakers for people who want maximum impact in a relatively small space.

When I mention that the KEF Reference I sounds like a pumped up LS50, that’s because it basically is. KEF has taken the latest version of their Uni-Q driver array, the 5” unit used in the LS50, and added a new 6.5” bass driver which can comfortably hit 45 Hz. That might not sound very deep, but the Uni-Q’s dispersion is so wide and vast that it creates the impression of a much larger speaker, one that can play loud without stress.

There were other KEF speakers in the room, including a pair of wireless LS50s, but it was time to let the new kids shine. Eventually the tunes became more serene, and it was clear that the KEF Reference I wasn’t a one-trick pony. All that delicacy and realism you get with the LS50s is still as seductive as ever. But when you need a little metal in your morning, the Reference I delivers a wicked kick to the seat of your pants.

Here we are, mid-November. It’s a glorious time to be alive. I say that with full acknowledgement of the “challenges”, which is a nice euphemism for “a can of worms I’m happy to open, but […]

In the retail trade, products by Michael Kors and Kate Spade are considered “affordable luxury.” They offer a taste of opulence, but with prices significantly below Chanel or Neiman Marcus. High-end audio has its more […]