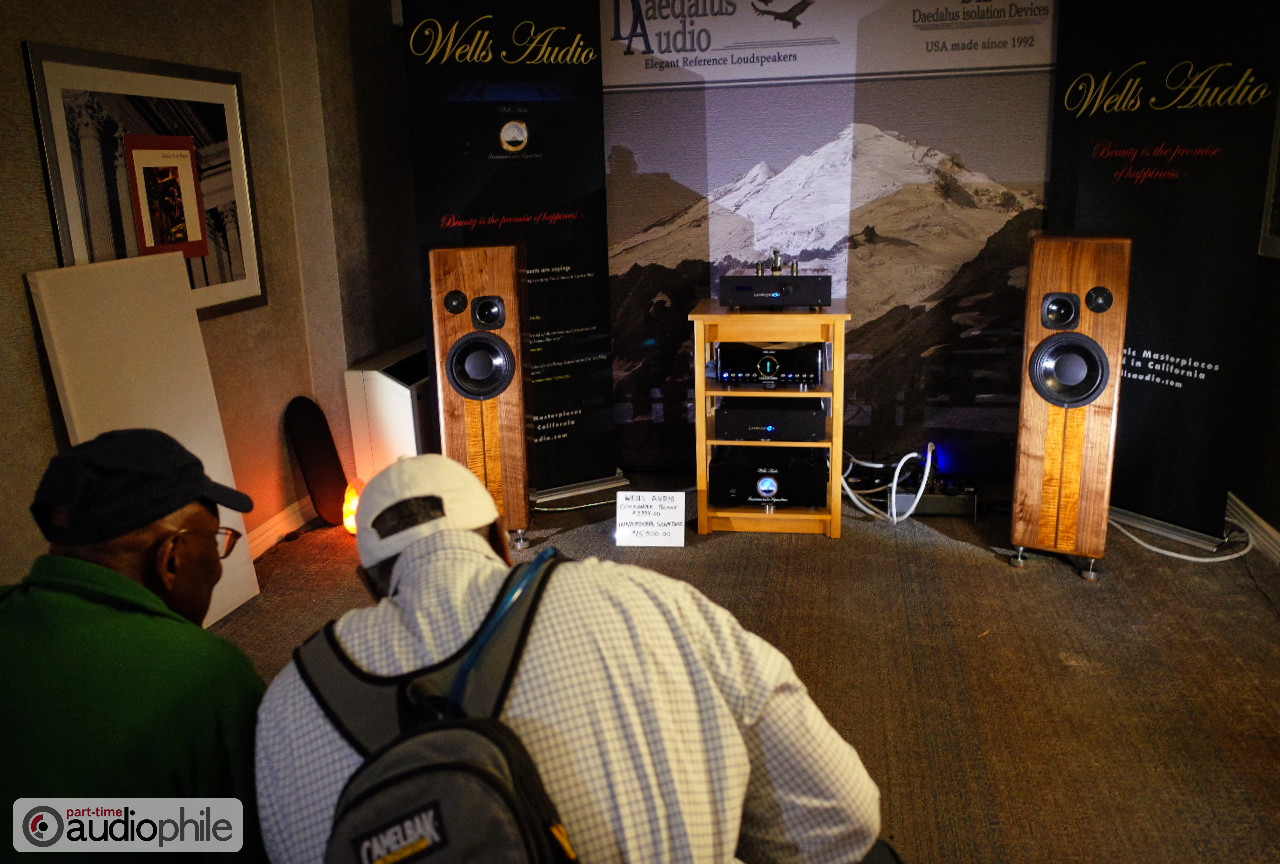 I’ve been waiting to meet (and listen) with Jeff Wells of Wells Audio for some time. The electronics created by Mr. Wells, are scary good with familiar pairings from Daedalus Audio, LampizatOr, and WyWires. 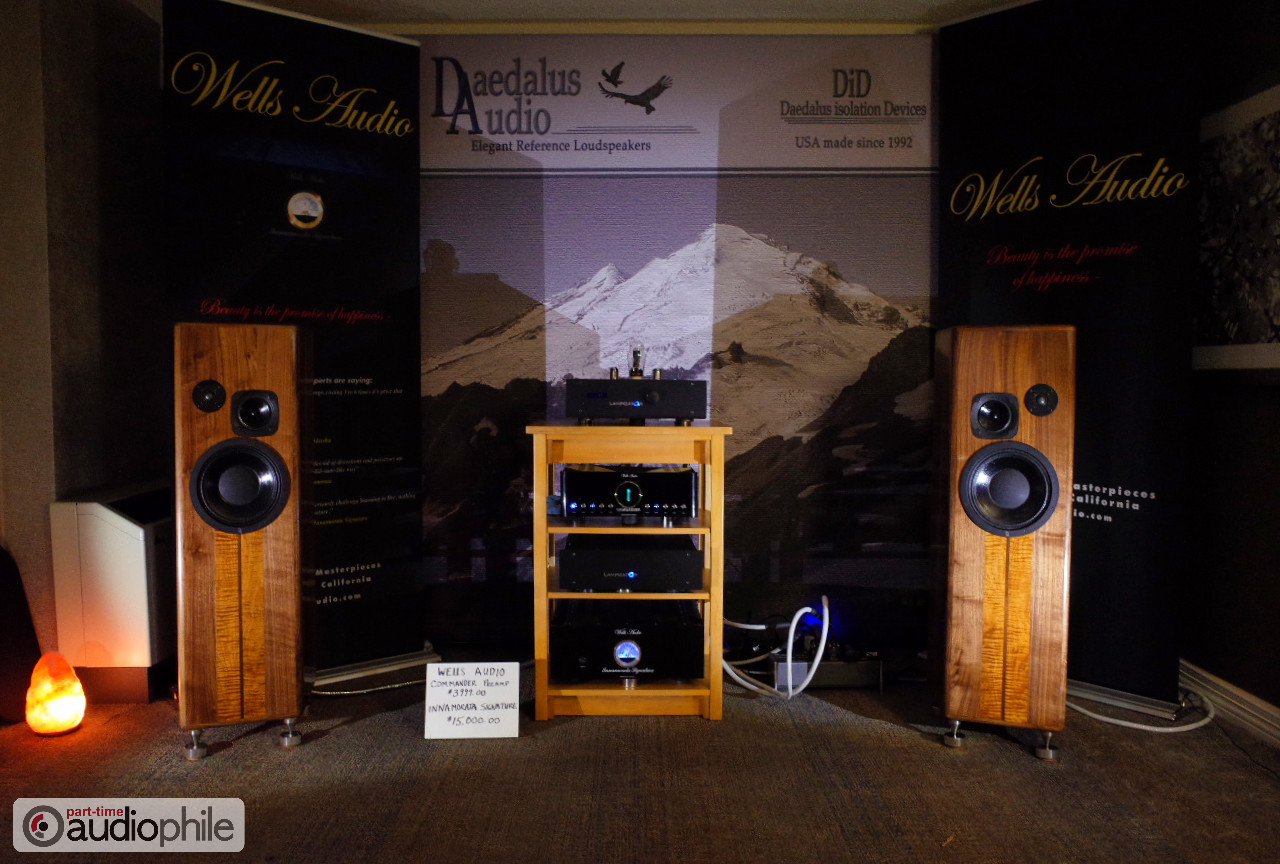 Lou Hinkley is the founder of Daedalus Audio, and he urged me on Thursday of the show to be sure to check out his room with Wells Audio, LampizatOr and WyWires. I told him it was already part of my pre-show plan. I bet most of you didn’t even know there was a “Thursday of the show”, but that’s just a time for exhibitor room setups and press industry arrivals. I did as promised and made my way up to hear Lou’s speakers, however for me the story was in the Wells Audio gear on display. Their contributions in the exhibit system were: the Commander Level II preamplifier (an all tube, Class-A line stage), the Innamorata Signature stereo amplifier (a solid state, Class-A/B, 150 wpc at 8-ohm design), and the Looking Glass passive filter power conditioner (based on a Jack Bybee and John Curl design).

The Commander Level II preamplifier is uses 12BH7 triodes as a gain stage, and a second pair of 12BH7’s to flip polairity. A full-function remote is included, and the volume level is indicated by a “magic eye” tube located in the front window of the face plate. There is a base model version of the Commander preamplifier, and also a Level III version. All versions use proprietary wire, Vishay resistors, Rike capacitors, crygenically treated PCBs and wire, Linear Technology IC’s etc.

Lou’s Apollo speakers are familiar to me from previous audio shows. I spend more time than I really should listening to Daedalus designs. Over the years I’ve become accustomed to the usual players that Lou had shown with, namely the solid state and tube pieces from ModWright Instruments. Here at Capital Audiofest in 2018 nevertheless, it is Wells Audio pieces creating a whole new and unique experience with the Daedalus Apollo speakers. I look at audiophile components the same way I look at wine or cheese — I can understand all of them, and love as many as I want to. They often vary in how they treat the signal, manipulating the music in their own special and unique way. Some are better than others, some are almost objectively top of the class, but subjectively there is a lot of room for many builders and designers to have space in the market. What I was hearing with Wells Audio’s contribution was intriguing and beguiling. 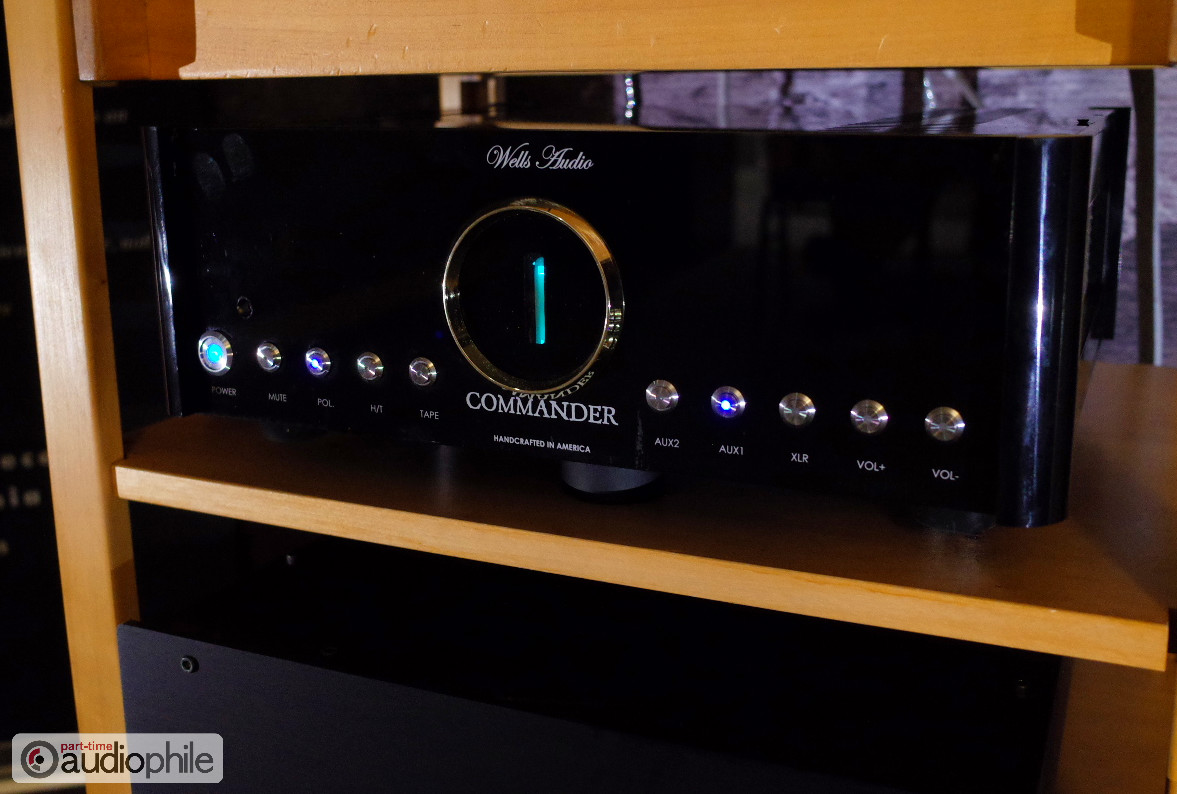 The Wells Audio combination of tube and solid state electronics did so well to embody the best of each’s inherit benefits, while masking or outright eliminating all of the downsides. Delivered in spades was micro-detail, dynamic power, natural decay, and tonality that was certifying a standard of purity.

The Apollo’s sounded different than they usually do. Of course that is to be expected. Electronics had just been changed, but what I am guessing is that shocked me so, was how much the Apollo yielded to that change. Imparting less of it’s own sound but instead letting the rest of the system shine through.

Ultimately I walked away with a new respect for the Apollo loudspeakers and found a new something to pine away for in Wells Audio control and power. 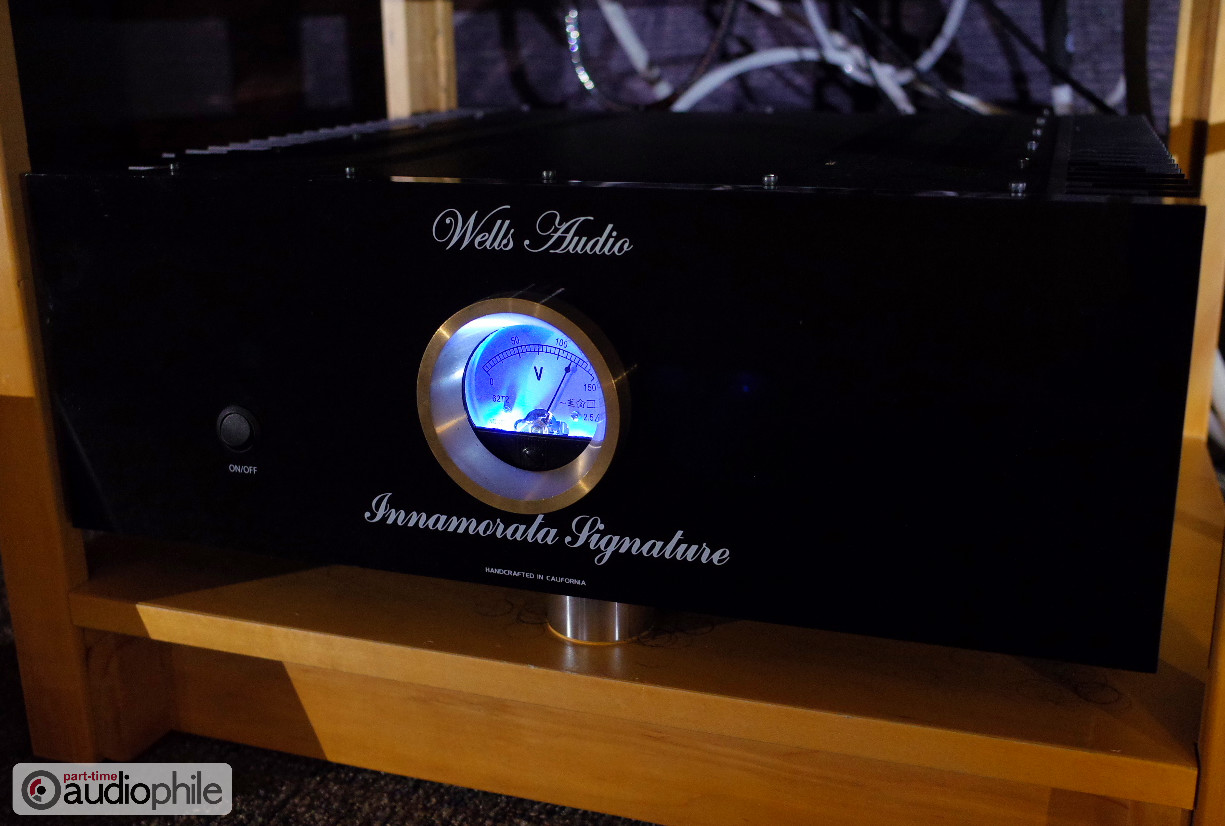 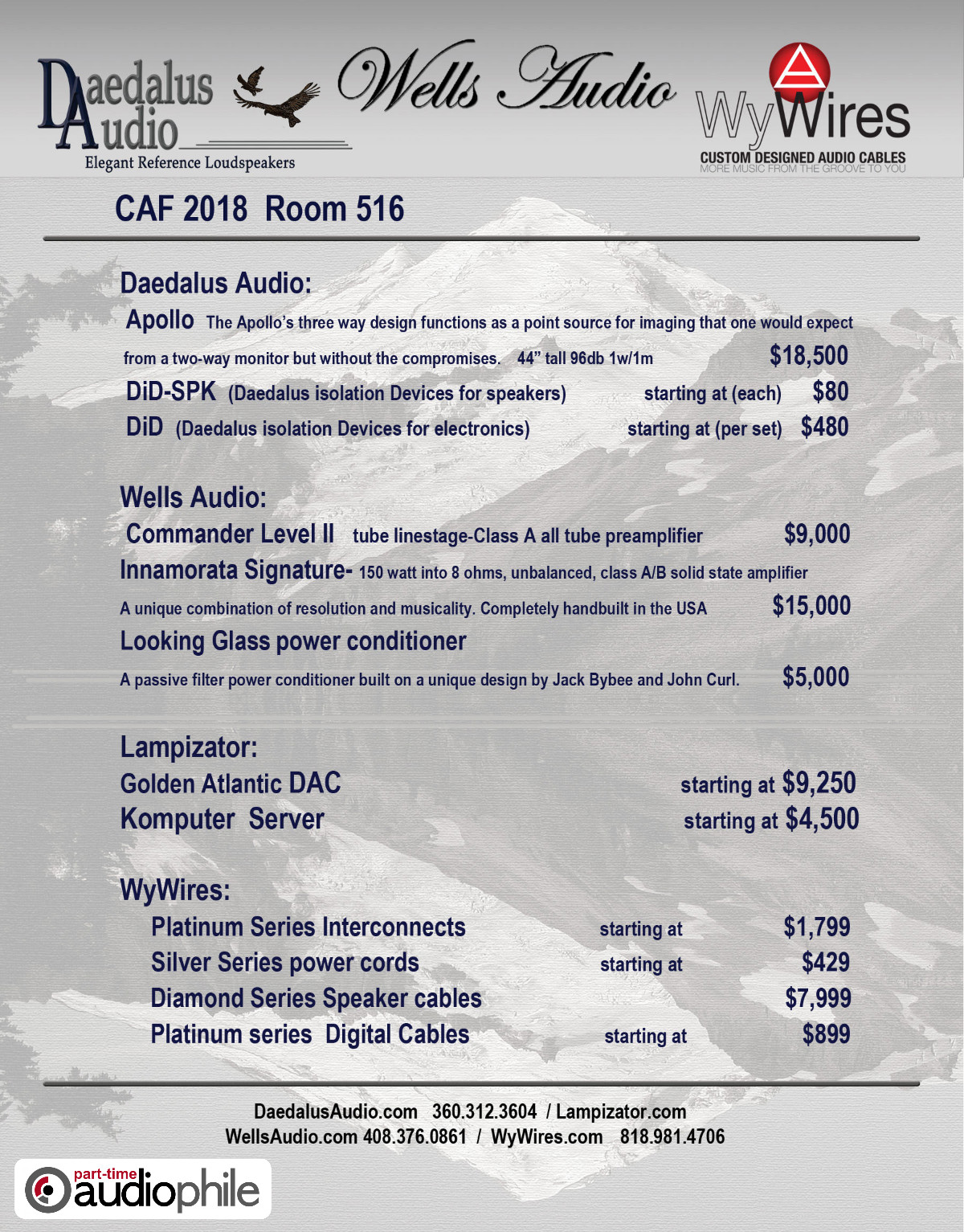 TAMPA, FL (PTA) — Upstream Audio was showing a masterfully configured digital and analog sourced system featuring components from Aesthetix, Focal, and Sonore. The Story At first the system might seem simple and spartan but […]

Before I get to the Final Touch Audio cables, I have to confess. Or maybe just explain how and why this happened, and caveat the whole thing with this: “Sometimes in life, good things just […]

LA Audio Show 2017: The Voice That Is launches a Tidal wave

You can say two things for certain about high-end audio dealer Doug White: He has terrific ears and is very discerning. White runs The Voice That Is, a Philadelphia-based shop. He is a fixture at […]