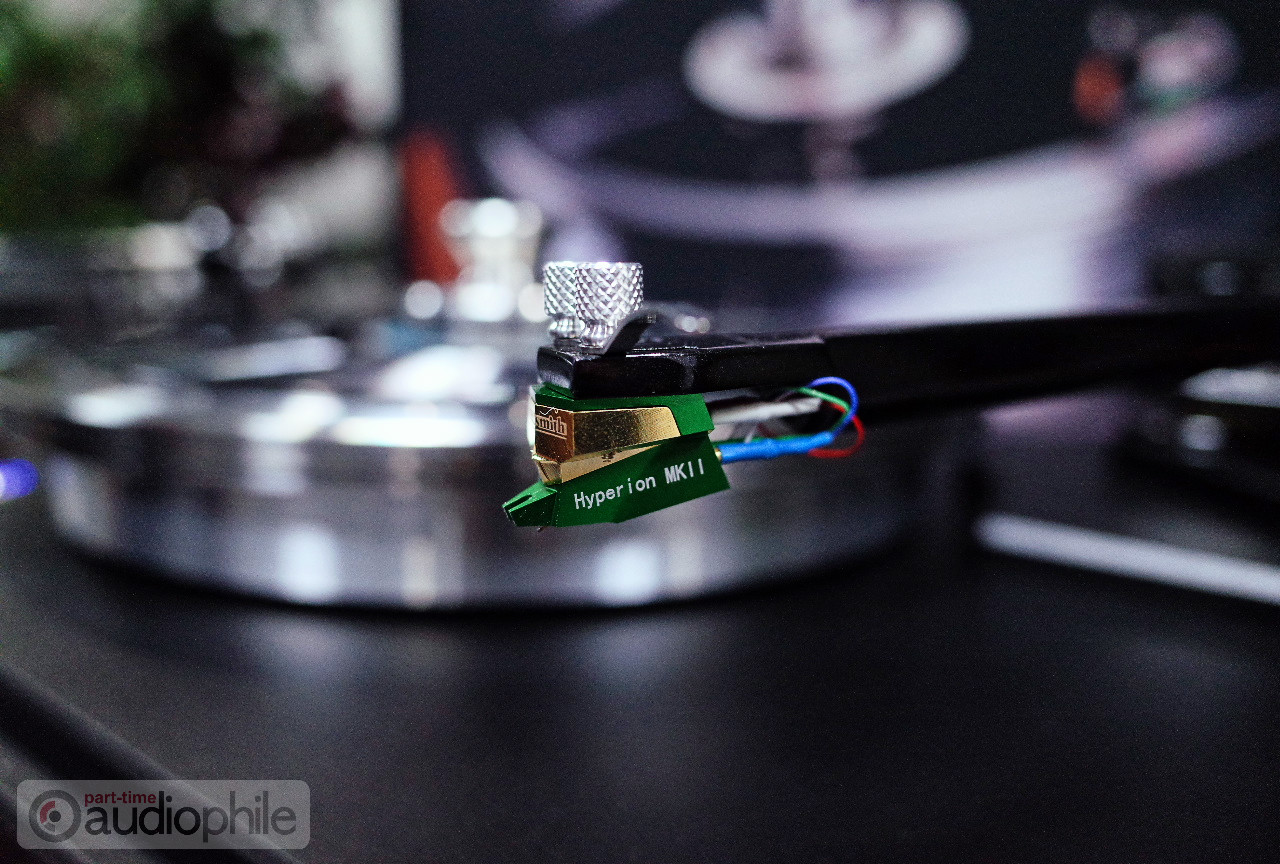 VPI Industries was in direct control, AudioShield had the room well protected, Krell and Wilson Audio tango with reference style, Soundsmith and Lyra go head-to-head, Nordost throws a lasso around the crowd.

Twice as impressive as one, there were two of the new VPI Industries HW-40 direct drive turntables on hand. Each equipped with a JWM-12 “Fatboy” tonearm, which is included in the price of the HW-40 turntable, and is standard. The HW-40 has benefitted from forty years of refinement as it now carries an updated and upgraded direct drive motor system, Nordost wiring, and an all new VTA Base on the fly. The start and stop time of the all-aluminum 12” platter is a blinding fast one second. With 2.68 Nm/sec of direct drive motor torque delivered directly to the platter (which weighs in at 25lbs), it’s no surprise these time figures at attainable.

When it comes to the update and upgrade of the HW-40 turntable as a whole, including its motor design and speed control, give credit to Harry Weisfelds original motor design being perfected by Mike Bettinger. The addition of Mike Bettinger to the VPI family has resulted in tremendous gains, which in the HW-40 equate to better noise isolation, better motor control, and computer aided speed controls. Mike’s engineering elements and design philosophy permeate though the new VPI direct-drive turntable, and consistently produce statement level sonics.

The reason for having two turntables on hand was to purposely compare between two phono cartridges: Soundsmith’s new Hyperion MkII, and the LYRA Etna. It truly was a clash of the titans. The Mike Bettinger designed VPI Voyager phono stage’s dual inputs made switching between the two tables rather easy, as well with level-matching. The Krell electronics on hand were brought-in from VPI Industries headquarters and are components of Harry Weisfeld’s personal system. Wilson Audio Alexx floor-standing speakers were delivering the presentation portion of the chain.

Lieutenant Commander, John McGurk, of the United States Navy was on hand representing his “hi-fi side hustle”, a turntable protection company aptly named AudioShield. John was a former VPI Industries associate who decided after leaving VPI to fill a particular niche by developing and providing a well-engineered dust and protection cover for all VPI production model turntables. All of AudioShield dust covers are made from high-strength Acrylic (also known by trade names such as Plexiglas, Acrylite, Lucite, and Perspex). The non-yellowing acrylic offers great levels of UV resistance, scratch resistance, and overall sheen when compared to more rigid plastics commonly used in budget turntable dust-covers. If the same material John McGurk uses for his AudioShield products are good enough for helicopters, submarine windows, and hockey rinks — then it is more than sufficient to provide the ultimate in protection for a VPI turntable. AudioSheild covers can be purchased directly from the AudioSheild website or from one of their many online and brick-and-mortar retailers scattered around the USA.

Also on hand was Mat Weisfeld’s most recent project, which was developed in partnership with his new wife Jane. Named Shyla, this little wonder stands just a smidge over 24-inches tall, but with height upgrades planned for the near future. In all fairness when it comes to sound quality, Shyla’s mastery of female vocals were stunningly powerful, accurate, and ripe a youthful tonality — unlike anything elsewhere at the show. Aesthetically Shyla is a combination of both Mat and Jane’s design philosophy, but leaning more towards Jane and all the better for it. Shyla, though new to VPI Industries, emphatically gets my nomination for best-of-show honors, hands down.

Have you ever been spoiled by a VPI direct-drive turntable? If not, prepare for torque, speed, and noise free operation. The new HW-40 is likely my new favourite turntable. Zooming up to full-speed in what seems like less than the stated one-second figures. As the platter spins away, I trying slowing it down with the friction of my fingers; the HW-40 laughs at my attempt. The Wilson Alexx loudspeakers resolve all of the promises made by the VPI and Krell components.

Is it weird to say that many of us in the room at launching of the show were surprised at how good this room sounded? Of course the names and histories of all players involved are of known pedigree performance. No surprise for creating high expectations, but in absolute truth, the room sound exceeded them.

The audio show circuit can seem more like an audio show circus at times. However, every so often a standout show-going experience happens in an audio show room and we’re left as journalist wanting to eschew our journalistic duties and set-up camp for the rest of the day. As to what factors in achieving this award — it’s everything.

Everything from the system’s sound, to its synergy, to music choices, to exhibiting creativity, to an individual product blowing us away, to the overall experience and atmosphere of a room engaging the audience (both in system and the hosts), on down to having great literature on what’s new, and complete system breakdown sheets with pricing information available for take home. A great room entertains, engages, and informs. Everything matters.

All cabling by Nordost

There are over 400 brands exhibiting here at Rocky Mountain Audio Fest. Making this event one of largest audio shows in North America. For some this can seem overwhelming. and cause a bit of anxiety. […]