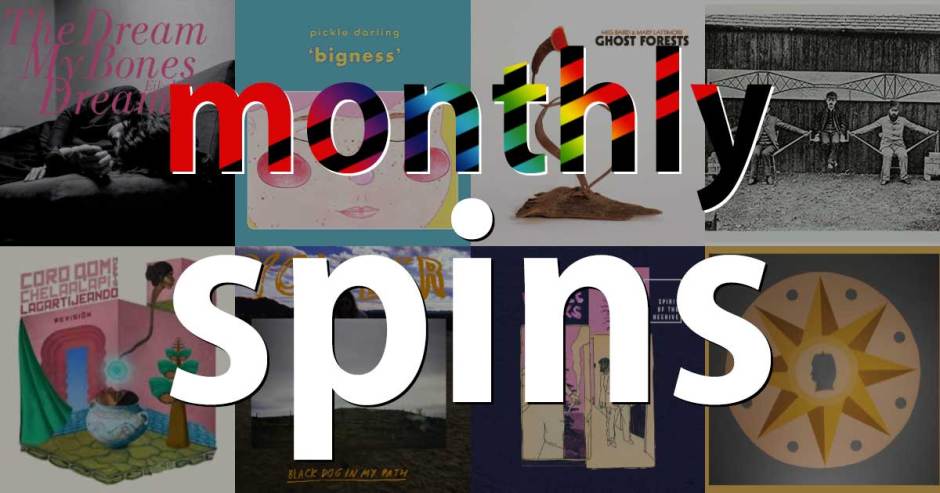 Another year dissolves and we find ourselves delving deep into late November and December releases, as well as a few I just discovered. New Year’s resolutions include possibly finishing the book I’m writing, and joining a gym and cutting out the sweets. What always astounds me at the beginning of the year is knowing that I will no doubt discover 20 or 30 albums that will move, inspire and shape my year to come, because generally I can put something on that I wore out ten years ago and still feel a tremulous vestige of how I felt during that time period.

These two stalwarts of the folk scene have collaborated on a new album together for the first time. There’s Meg Baird of Espers and Heron Oblivion and renowned harpist Mary Lattimore. They bring such restraint and at the same time power to these compositions. Tradition is one thing, and they know it so well that they can disregard those cliches and move on into freak-folk dirges and trance-inducing vocal schematics. This would have made my best of 2018 list since it came out in late November, but I knew I needed to save some for this month.

The Spirit of the Beehive: Hypnic Jerks

More wonderment from the thriving Philly scene, The Spirit of The Beehive, come down to earth a bit on this 2nd release. Less dissonance but still full of surprising change-ups and a constant collage of clips from old VHS tapes found in bassist Rivke Ravede’s family
basement. What started out as an experiment, working with the audio from the video, took on more of the structure of an album. This is indie rock at it’s most experimental.

Daniel Bachman has come a long way in a short amount of time. Always uncompromising and up for exploration, The Morning Star finds him in a mantra-like state of Americana-trance. This is a sprawling, double album, a full 75 minutes, with some 20 minute takes. It sneaks up on you slowly offering up a plainspoken transport into a kaleidoscopic series of overlapping dances and dirges. Bachman has said that this is the album, full of field recordings and improvisational uprisings, was conceived with the Post-Trump America in mind.

Kathryn Joseph: The Bones You Have Thrown Me and Blood I’ve Spilled

She won a best Scottish album of the year award for this one that is a few years old but new to me. “My mum sings in a Gaelic choir, my gran was a musician who played by ear. My sister is amazing and picks up and plays everything.

A memorable fusing of cultures. This sort of thing is either very good or a dud. Argentinian producer Lagartjieando teams up with a choir from the Coro Qom Chelaalpi, an indigenous tribe that lives in his home province of Chaco and has been declared a living cultural heritage by UNESCO. The name translates from their native tongue in “Bandada de Zorzales,” or in English “Flock of Thrushes.” Lovely and enchanting. There is animism, mythology and the use of a native instrument called the nivike, which is a single-stringed violin that represents the sound a jaguar makes while sharpening its claws on a tree, and was used as a long-range form of communication.

Yowler: Black Dog in My Path

Former Saintseneca member Maryn Jones still works with her voice and guitar, but here she brings in some new friends from the Philadelphia scene, bringing the electric guitar out and taking more risks that on her first solo outing. I don’t know how so many people with acoustic guitars and voice can suck, while others like Yowler enlighten and expand. It’s a vibe. If there is a clear explication of what Black Dog In My Path is all about it comes on the cut entitled “Sorrow,” wherein she sings “So if we make it through these times and more sorrow is all we find/ I hope I can at least leave something behind / A small word, or a sigh, that’d be fine.

File Under: pure bedroom pop, the wordplay alone worth the time to listen

I love that their are brilliant and eccentric songwriters sitting in their bedrooms using the
most basic audio programs, synthesizers, guitars, the girl who lives next door and knows
how to play piano. Of course it also helps if you come from as distant and unique a place as
New Zealand. Pickle Darling is the work of Lukas Mayo, who might be an acquired taste unless
you have been already drinking the Kiwi Koolaide. There might be toy pianos and the simplest
child’s synths being used this is but it’s a well recorded record that sneaks up on you if you let
it in. Most surprising are the intimacy and probing nature of the lyrics, which ponder much darker
moods and places than the “bounce-castle universe” it implies.

She’s been at this for awhile now and working with expat producer Jim O’ Rourke who told The Wire that “I decided to be almost invisible on this one.” Ishibashi understands pop traditional while always searching for the opening into a greater expanse of frontier—into unknown regions where she has never explored.

Singles and Videos of Note

File Under: I know it’a been used to sell soap and beer and trucks but damned if it isn’t a magical, voodoo ride.

July slipped by rather quickly and here we are with a new edition of Monthly Spins for August 2018. A rather light month compared to those recently. Still, a great deal of lovely music for […]

I want to thank Scot for bringing me onboard after having written for Audiostream for a year and a half. I have a simple set-up with a pair of AudioQuest Nightowl headphones and Schiiit DAC […]