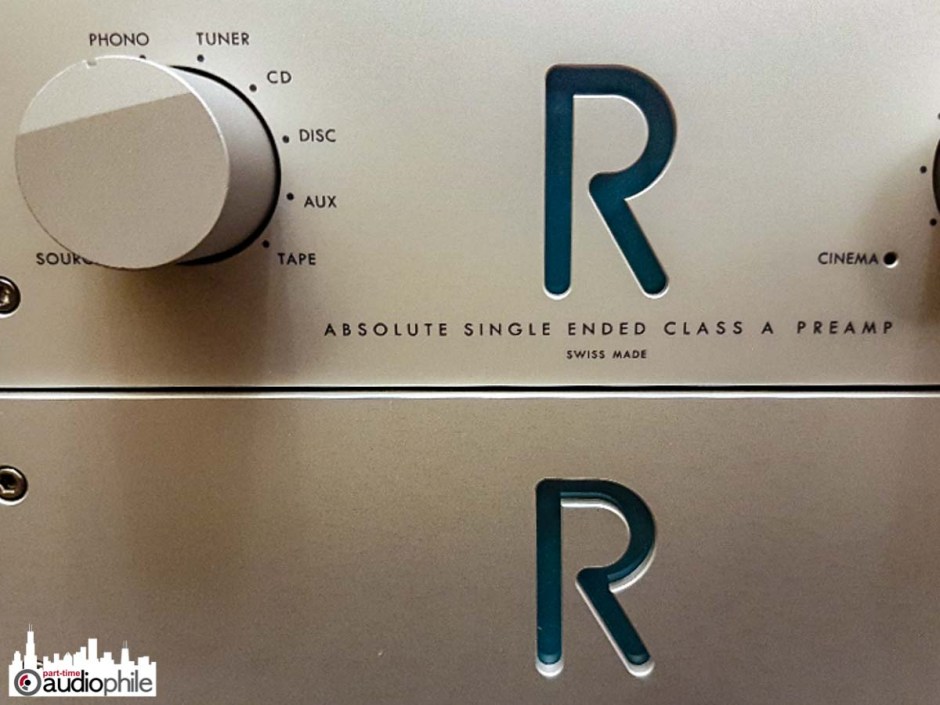 Every dyed-in-the-wool, card-carrying, worldly audiophile knows of all the significant audio companies coming out of that highly regarded Alpine nation, right? Well, maybe not. Not only is Rowen a major player (website) in the Swiss audio market, it also boasts a 47-year unbroken heritage, successfully passing the flame from one generation to the next. Rowen is uncommon in that they manufacture high-end amps and speakers. This advantages them in knowing the demands both impose on each other.

Founded by electrical engineer Anton Aebischer, in Canton Fribourg way back in 1972, the company has in the last few years passed the baton on to sons Yvo (new general manager) and Pascal. Along with the mantle, the father has managed to pass on all his unique breakthroughs and proprietary techniques. Actually, to be specific, the company itself is not Rowen, but rather Dynavox.  Dynavox is a dual headed entity, in that it manufactures and markets it own audio products under the Rowen brand, as well as distributes foreign brands in Switzerland to its Swiss dealer network. It is the same network that until today exclusively sells the Rowen brand in Switzerland and only in Switzerland (though there may be ONE exception for a specific German retailer).

And this is one of things that has distinguished Rowen to date: it (essentially) only sells in Switzerland! Fans of the brand in neighboring countries can make a trip to the Swiss Confederation and buy there, of course. This strategy has served Dynavox well so far, as they have been able to consolidate very good market share in Switzerland and keep prices very affordable relative to the audiophile value they deliver as there is no middle-man taking a margin cut on the distribution chain from factory to shop floor. Rowen has very attractive design in their higher models, but tended to have more utilitarian packaging in the mid- to low-end part of their portfolio range, focussing more on performance value there.

The significant change is that this new generation wants to put their own stamp on the company and are now actively seeking a way to expand to other geographies without unsettling their well-oiled Swiss network. America and Asia are obvious destinations and they have already made first contact. More details will follow as things progress, I am promised.

Their industrial design philosophy has been changing a bit, as Rowen has found a way to incorporate more aesthetically pleasing considerations into their designs, while not compromising on performance and maintaining extremely good price value. I was told they will continue in this way, as they forecast customers demanding extreme sound quality integrated into their (living room) entertainment lifestyles. 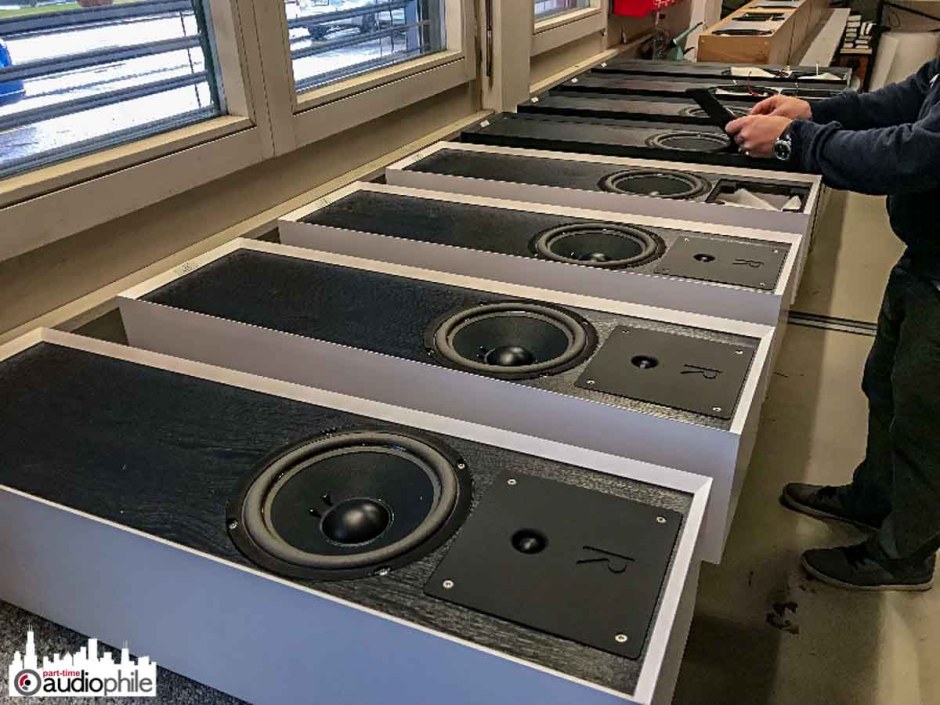 Me and my Rowen

My own interest in Rowen came because I have a NAD C375BEE Integrated “RSP version”. ‘RSP’ means “Rowen Swiss Power”, where the amp is hot rodded with Rowen’s own tech. NAD is chosen as they know it well as a local distributor and they think it has “good bones”. So, for RSP mods, Rowen adds their “Negative Output Impedance” tech to the power amp and they do some modest upgrades to the preamp section. Essentially, this is voltage overcompensation when impedance falls dramatically, for example at inflection points in the music (dynamic jumps). The bass is the most obvious area of improvement in sound quality, and the amp is far more robust that typical in handling difficult speaker loads. For example, my RSP’d NAD can easily drive four 6 ohm speakers in parallel without clipping. Anton had told me (years ago, now) that the C375BEE (150wpc into 8 ohms) was capable of about 750wpc into 1 ohm.

However, I got bitten by the upgrade bug and wanted to try the (now obsolete) dual-mono M3 from the Masters series. I called Yvo for advice and he told me that I could only expect at most a 2% subjective improvement. Only by going to separates would I get a quantum leap. He invited me to come listen and talk about it. That was an offer I apparently could not refuse.

It had been years since I did a factory visit and felt it was past time to get a refresh. Many models had been upgraded and new ones introduced. In addition, I had a great time and got a LOT of insight from Yvo and Anton on my previous visit. This time I met Pascal as well but spent more time with Yvo. He had taken me through Rowen amp design philosophy and history and explained why they tend to choose the road less traveled. Their design ethos is about releasing the emotion of music in real-world products that “normal” people can buy. This forces them to concentrate on keeping the designs as simple and pure as possible. They don’t believe in over-engineering, where you create more problems that force ever more complex and expensive engineering solutions to get to a theoretical nirvana. They rather use their ingenuity to keep the design simple and efficacious from the start. In this way, I think they offer very compelling solutions for customers. 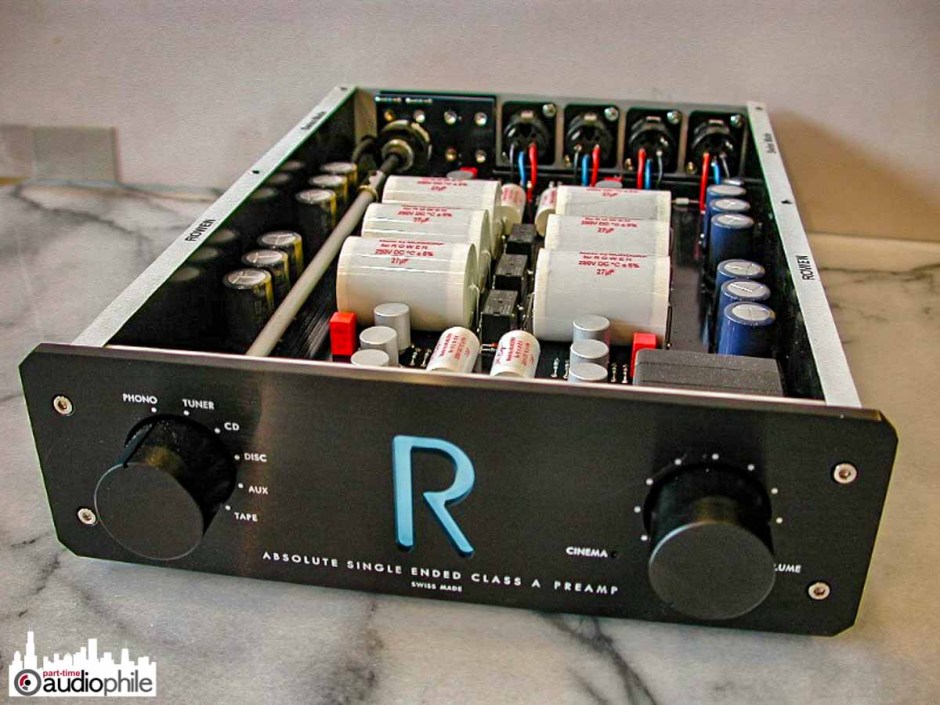 After very impressive listening sessions with several amps and Rowen speakers using digital sources, we even listened to their OEM turntable from ClearAudio (Concept model) that they do some mods to for the Swiss market.  I left with a full demo kit of their top of the line, the L’Absolute (or “Absolute Plus” for anglophones) PRE and four Rowen Absolute MONO power amps (65wpc into 8 ohms and 1,000wpc into 0.5ohms). Sadly, the flagship Absolute One monobloc was not available and those have specs of ~4,000wpc into 0.5ohms! I also got a Rowen 800w Isolating Transformer (that is actually manufactured in Germany). Retail for the lot would be about $19K, much less than what one could expect to get for such power and quality on the US or UK market. All the Rowen amp boxes are compact, smaller in size than your average shoe box.

I test drove this setup at home for about 3 weeks and as can be expected, the uplift was immediate and tangible. This was confirmed by a pal who knows my old setup.

“No comparison” was the summary impression we both had.

The biggest sound quality upgrade was the significantly crisper high-frequency sonics and a surprising sense of ease and “live-ness” from this setup, using only 2 monoblocs. The big surprise to me was that going to four monoblocs (one per speaker) did not give any real uplift, as I guess the two monoblocs were more than enough.

I also compared the internal phono stage of the preamp to my iFi iPhono 2 with Paul Hynes SR3 Linear Power Supply on my very basic vintage TT setup, and both sounded very good, with different strengths and weaknesses.

For digital, I used the Lampizat0r Pacific DAC with Kron PX25 and 242 tubes. This was fed by a “custom built and tweaked” Windows 10 Server with Laufer-Teknik Memory Player software suite using JRiver playback engine. I also used a modded Denon Universal player for CD playback. Except for the Preamp, Transformer and DAC where I used “Audiophile” power cords (SwissCables Reference and Goldmund Sweetcord), the rest was with standard $10 powercords.

It was with a heavy heart when I had to return the gear. The Rowen Absolute MONO amps have an alluring neutral sound that plays well with my tubed source and Heil AMT speakers. The L’Absolute PRE really brings out the full potential of the Heil drivers in the high-frequency range and this couples well with the very, very grippy bass from the Absolute MONOs. The woofers are perfectly controlled under every possible situation that I explored. If I were to encapsulate my time with this separates amp demo into one word, it would be: UNCLIPPABLE! Anything you throw at this setup, the amps shrug off and maintain their hold over the speakers.

I had made up my mind that the Isolating Transformer was a must, as it is reasonably priced to begin with and the scientific rationale is a no-brainer. My second visit within a month was again eventful and we went through other gear permutations from entry level to their flagship speakers (with LMT tweeters – linear motion technology). I brought some demo tracks this time and Yvo turned up the volume to 11 on some percussion tracks to show the limits of performance of the full Rowen gear, amps, speakers and cables. 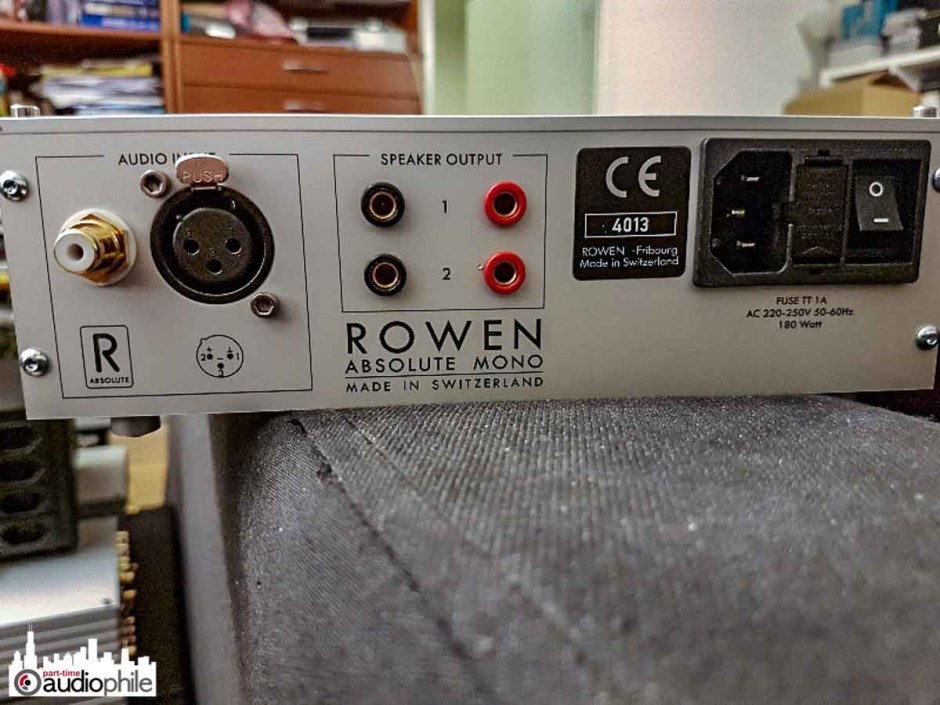 The home demo impressed me so much that I bought some Rowen Absolute MONOs and am looking into ways to convince myself to finance an upper-level preamp from Rowen … perhaps the attractive and compact SmartPre? The single box SmartPre has the lovely glowing BLUE “R” on the front panel and can use ANY remote control, as it has learning logic built in.  It also features the same Rowen tech as L’Absolute Pre: “Special ODS switching circuits of the input stage (optimal dynamic sensitivity) provide a dynamic sensitivity that is up to 10 times better than in the usual transistor circuits and is still 2-3 times higher than in triode tube circuitry.” I have a SmartPre on loan right now and will update this piece later with my thought in comparison to the L’Absolute Pre (which needs a separate Power supply box, as it has a phono preamp option). SmartPre must use an external TT phono stage. Hopefully, when I return with an update on my latest demo loan, I will have news on where and when and with whom Rowen will partner, so that US audiophile can enjoy what I currently do without breaking the bank.

Exciting times around the corner!

For more information on Rowen Swiss Made, please visit: https://www.rowen.ch/.

I am not in the budget for an ultra-fi system — and probably never will be. That fact, sad though it is, is true for most of us. HOWEVER, the point of the ultra-fi is […]

The new Olympica series from Sonus Faber features a number of innovations—new drivers and crossovers, new cabinet designs and new approaches to enclosure bracing and tuning. The result is breathtaking looks and elegant sound in a compact package. […]

By Brian Hunter The (Digital) Times They Are A Changin’ With the onslaught of technological change and market shift impacting traditional hi-fi, more established companies are dipping their big toes in the murky waters of […]