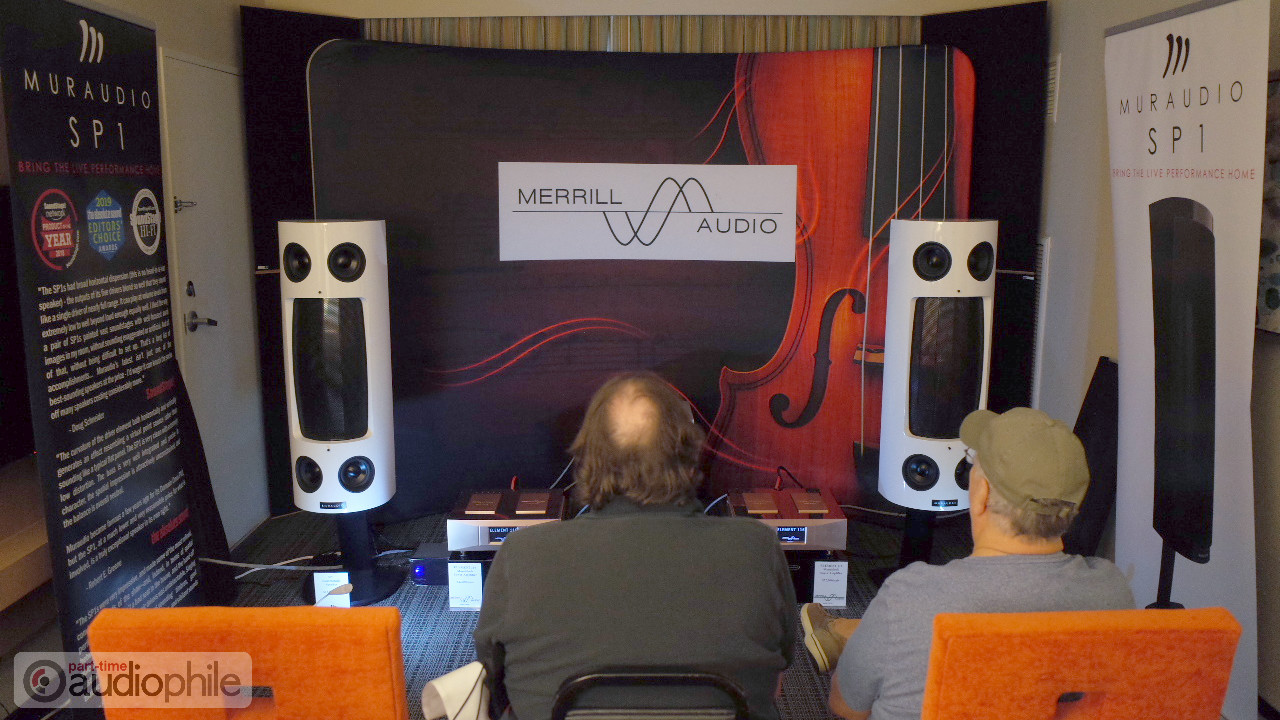 Muraudio catches my fancy once again, but on a whole new level. Merrill Audio shows itself to be the true rose gold standard in reference power and finesse. Aurender and EMM Labs handle the music. 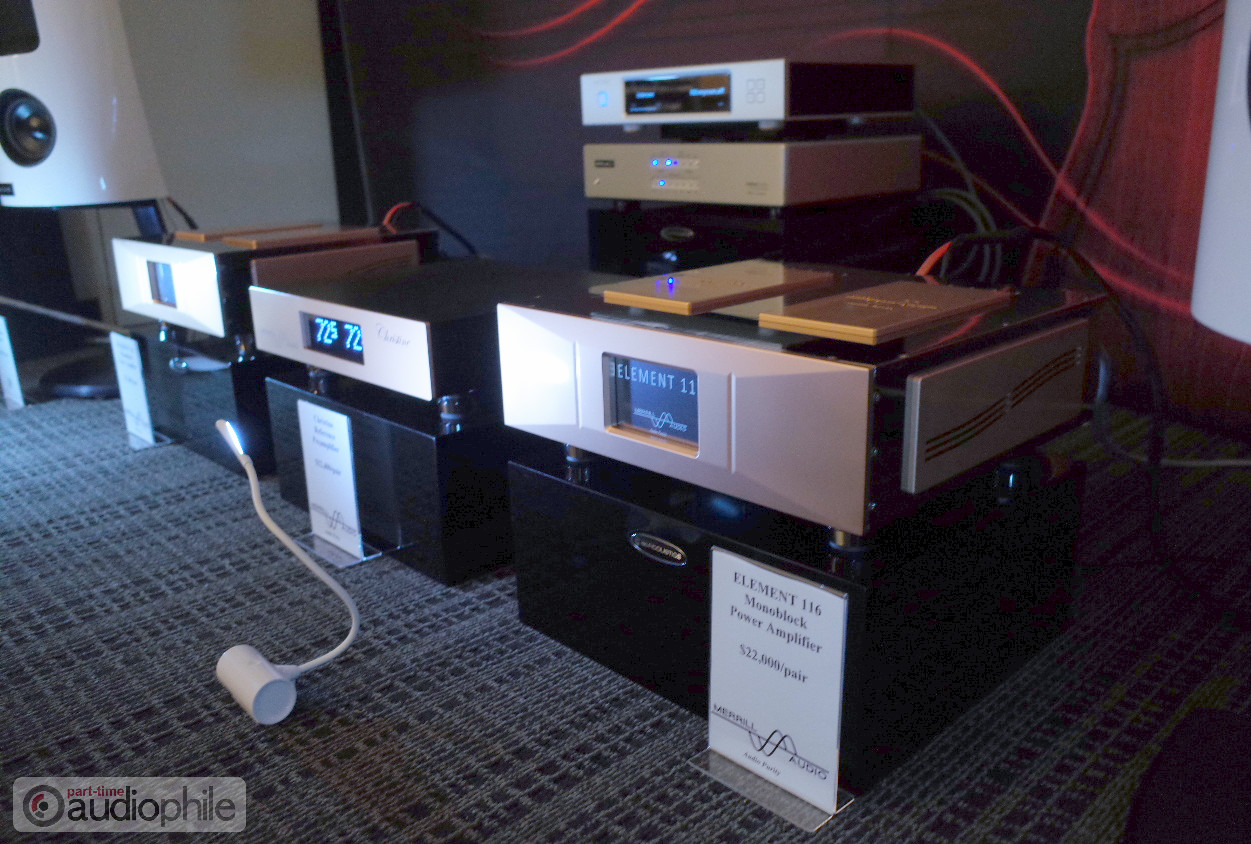 I’ve covered last years tour of the The Muraudio SP1 full-range loudspeaker pretty closely. The SP1 was launched in March 2018 and has received many Editor’s Choice and Product of the Year awards from numerous publications in that short time. Even from my own coverage of the SP1 at previous audio shows in 2018, it twice ended up in my Must See Rooms.

Initially what caught my attention about the Muraudio SP1 was its glossy white paint, the curved ESL point-source panel that was center stage to four six-inch traditional cone mid-bass drivers in each loudspeaker. They continue to be the largest and most unique D’Appolito array I’ve ever seen or heard. Starting at $14,700 pr USD in semi-gloss veneers and solid colours. Here at the Florida Audio Expo, they were on display in Muraudio’s signature SP1 Steller White High Gloss finish which is an additional $650 USD.

What is different about this go-round with the Muradio loudspeakers is their show-pairing with Merrill Audio’s new ELEMENT 116 monoblock power amplifiers, and Christine Reference preamplifier. The ELEMENT 116 was introduced in November of 2018, and much like the Muraudio speakers they are paired with today, they are snatching up multiple awards and acclaim. The ELEMENT 116 uses trickle down technology from the larger ELEMENT 118. The ELEMENTs uses a proprietary design with Gallium Nitride Transistors, known to be the fastest transistors available today, with almost no inductance and almost no capacitance. This allow the transistors to operate into the Gigahertz range with great efficiency. Merrill is using a zero feedback (or Open Loop) design code name ZXOL. Feedback is traditionally used to remove distortions and control gain. Some use it for stability. In the Merrill Audio ELEMENT series of amplifiers, there is zero feedback. This allows for faster, more detailed response and all equating to a more realistic musical performance. Yes, this is a Class-D design with zero dead time and no distortion. The Gallium Transistors allow this advanced design, and the ELEMENT series of amplifiers to operate with stunning efficiency. 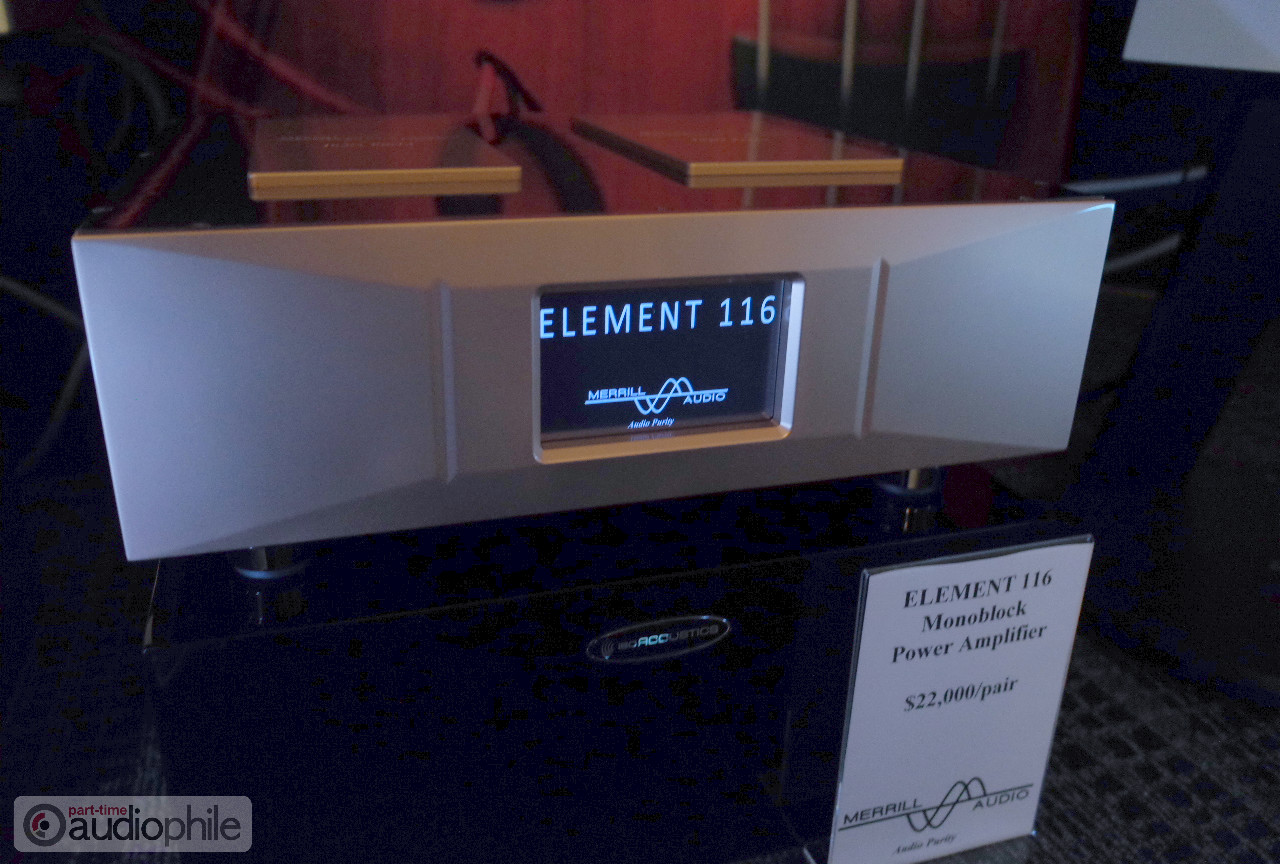 I’m out in the hallway speaking with Rob Runolfson (President of Muraudio) about speakers and life in general, when gritty vocals, ‘80s electric guitar, and those annoying gated-reverb drums go to pounding on the walls. I can’t believe what I’m hearing. It’s not just the sound that is shocking me from this partitioned distance, it’s the track that’s playing — it’s Def Leopard’s 1987 track, Pour Some Sugar On Me. I am now an emotional wreck.

For some retrospective context, the song Pour Some Sugar On Me was the number one song on MTV’s Top Twenty Countdown for what seemed like 18 months, “pouring” into 1988. The song was cute the first few times I heard it, but somewhere around play 3,000 I became a little sour about it’s omniscience to say the least. Through most of my life going forward, any time I heard the song, I was met with feelings of great annoyance, and worry that all my life choices leading me to cross paths with this song again were indeed flawed.

Back in present time, things are happening quickly. I’m hearing this music from outside the room, and I’m sprinting through the door frantically looking for a front row seat. I’m in disbelief that Merrill Wettasinghe has chosen this song, but even more so that this song sounds fresh and scaled up like never before. Before me is the most powerful wall of clean force and control. Merrill has the volume cranked and I’m not the only one in the room with mouth agape. I’m in love. The presentation is beguiling in it’s realism. This begins many trips to the Merrill/Muraudio room. For many listening sessions with the Merrill ELEMENT 116s and Muraudio SP1s, while dialing through numerous tracks and genres it becomes clear this pairing is as strong in synergy, soul, dynamics, and detail (SSDD) as anything I’ve heard at the show. I’ve heard the SP1s before and they were stunning, but this is an awakening.

GoldenEar’s Triton series of speakers has been a overachieving since its debut. From the Triton One, on down to the Triton Seven, all are serious competitors at and above their price point. My gut reaction […]

DOWNLOAD YOUR COPY OF OUR BRAND NEW WINTER EDITION HERE If you’re reading this than I’m still alive, and none of my family or friends has tied me up, and left me for dead in a […]

By Dr. Panagiotis Karavitis This was without doubt the most discussed product of the show. Everybody was talking about it: “have you heard it?-yes, not yet, I will, you must”. Even engineers from other brands […]