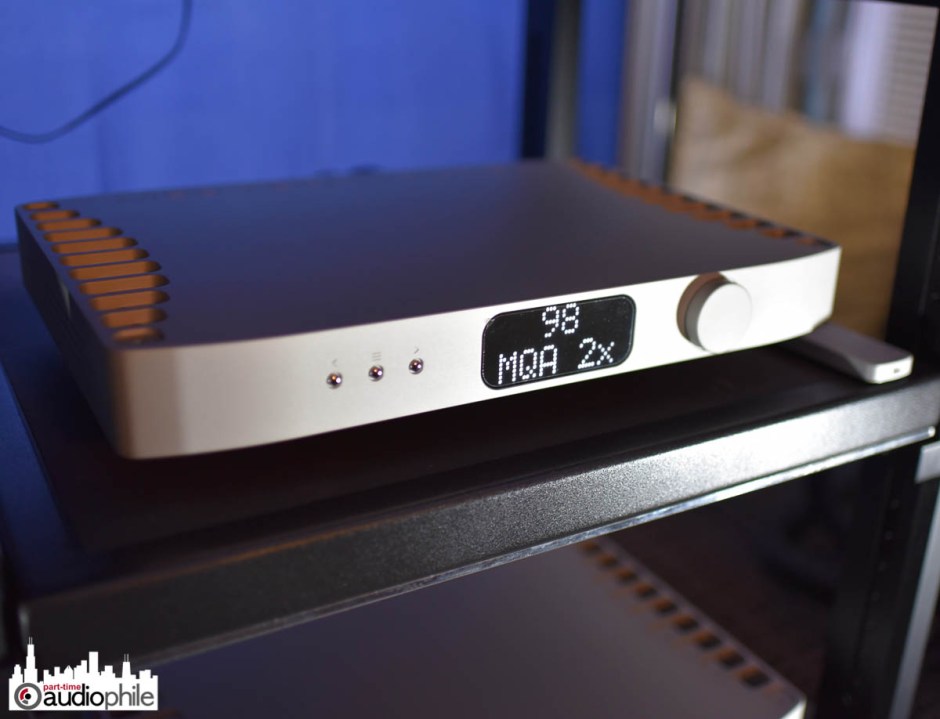 I’ve been digging into MQA for a follow-up article so I met up with Ken Forsythe, Sue Toscano, and their friend Angela Speziale who I just met at the Tampa show.  Sue and Angela wound up helping out the Florida show team and were a big factor in the show going so well.  Ken and I have been talking about both the business elements and the technical workings of MQA.  It had been a while since I saw Ken and he suggested Sue and Angela join us.  Sue handles public relations for the MQA and Ken is driving partnerships for MQA and has a long history working with Bob Stuart, the inventor of MQA.

Well it turns out that MQA has been quietly making progress on a number of fronts.  Three big news items were discussed at our lunch:

We will continue to follow progress of both MQA and Qobuz but it appears hirez playback options are increasing for audiophiles in a number of environments.

Press releases after the fold.

Milpitas, California – ESS Technology, the industry leader in audio and analog design, announced today the ES9068Q Low-Power Audiophile CODEC.  The newest in a line of SABRE®DACs, it is designed for small desktop and portable applications with demanding audio specifications.  This is the first product to offer an integrated hardware MQA (Master Quality Authenticated) renderer that makes MQA playback easy and cost-efficient.  This is also the first product in the series with CODEC capabilities; it features microphone support as well as stereo PDM inputs.

The ES9068Q will offer Best-in-Class performance based on the SABRE DAC architecture with HyperStream® II modulation and can be used as a functional upgrade to the successful ES9018K2M, ES9028Q2M, and ES9038Q2M products. The ES9068Q provides a Dynamic Range of 128dBA and total harmonic distortion of -120dB THD+N.  The DAC can support a wide range of input formats including: PCM up to 32bit 768kHz, DSD1024, DoP, SPDIF, and MQA.

MQA technology is becoming widely accepted as the standard for distributing ultra-high-quality music across a variety of platforms.  The encoding process folds extra information into the signal that can be recovered later.  The subsequent “unfolding” process takes place in two steps: the first unfold, called Core Decoding, can be done on most DSP systems, and system designers looking to implement this can take advantage of standard code.  The final step in the unfolding, called rendering, needs to be done in tight cooperation with the DAC.  The quality of the rendering depends on the DAC output filters, and this has typically involved hand tuning each design.  However, the ES9068Q’s hardware rendering takes care of all the tuning automatically, without the need for special tuning.  As the ES9068Q will automatically detect the MQA stream and engage the rendering, the entire process requires no additional design work.

This new CODEC is a great solution for USB headsets that utilize the microphone input and can be combined with wireless radios to create wireless systems that are able to stream high quality MQA music.   The ES9068Q is also a great fit for a desktop DAC or mini-system that benefits from great sound quality and easy design.

Samples and evaluation boards are available and the ES9068 will be featured for listening in the ESS demo suite at the 2019 CES show in Las Vegas, January 8th – 11th.  For more information, contact your local sales representative.

Las Vegas/New York/London, 7 January 2019: MQA, the world’s leading company delivering master quality audio in a file small enough to stream, today announced that the company is expanding its innovative technology to the automotive market. MQA technology will be integrated within BlackBerry’s QNX Acoustics Management Platform, used by leading OEMs to build secure and scalable software solutions for connected and autonomous cars. To mark the launch of the new integration, an MQA-powered listening experience will be demonstrated in a showcase vehicle at BlackBerry’s booth (#7523 LVCC North Hall) at the Consumer Electronics Show in Las Vegas (8-12 January 2019).

“As studio quality audio becomes the expectation of music fans – at home and on smartphones – consumers will also demand the best quality in the car. MQA’s integration with BlackBerry shows that it can be possible for manufacturers to deliver on that promise,” said Mike Jbara, CEO of MQA.

“QNX has long been on the forefront of automotive acoustics processing with handsfree, in- car communication and noise cancellation technologies,” said Len Layton, Acoustics Business Development Manager, BlackBerry. “Music will remain a key element of the driving experience. Our work with MQA will provide automakers with the ability to deliver audio that will satisfy even the most discerning music fans.”

MQA’s entry into the automotive industry follows its continued success in popularising premium audio playback in the home and mobile markets. The company has partnerships with all three major record labels as well as the independent sector; music services such as TIDAL and Onkyo Music offer MQA master recordings for streaming and download; and in the last 18 months, handset manufacturers LG and Essential have both launched mobile devices with MQA playback capability.

Las Vegas/New York/London, 7 January 2019: TIDAL Masters is now available on all Android smartphones, so you can experience studio quality sound with TIDAL Masters wherever you choose to listen.

Global music and entertainment platform, TIDAL, first announced its partnership with MQA at CES in January 2017, after integrating MQA’s award-winning technology into its TIDAL HiFi tier on desktop. MQA captures, packages and delivers the original sound, at the highest quality, and in a file small enough to stream. With the latest update, the TIDAL Android app will now include the MQA decoder.

As listening habits evolve, mainstream audiences are increasingly choosing to stream music and listen on their mobile devices.

Mike Jbara, MQA CEO, stated, “We know that most music fans are choosing to stream on theirphones. MQA’s view is that you should have the best quality sound regardless of where you’re listening. We’re delighted that, through our ongoing collaboration with TIDAL, access to masterquality audio is now expanding across mobile.”

Lior Tibon, TIDAL COO, commented, “This is a major advancement for the audiophile community and TIDAL’s HiFi members. As our platform evolves, our partnership with MQA continues to expand and cements our position as a leader in the High-Fidelity audio space.”

MQA has partnerships with all three major record labels, as well as the independent label community, and the range of master quality music continues to grow rapidly, covering new releases and catalogue recordings.

This year, I decided to do the accelerated CES 2017 tour.  With some loss of good judgement, I created a flight plan in and out of Vegas from Seattle in a single day with just enough time to […]

I had a chance to catch up with one of the Roon Labs power brokers this week, namely Rob Darling, on what was happening with the software company’s latest release, and how it addresses MQA […]

The MQA juggernaut continues to gather momentum with today’s announcement that the Universal Music Group has inked a multi-year deal with MQA to encode Universal’s massive catalog of master recordings. Those naysayers, and companies that […]