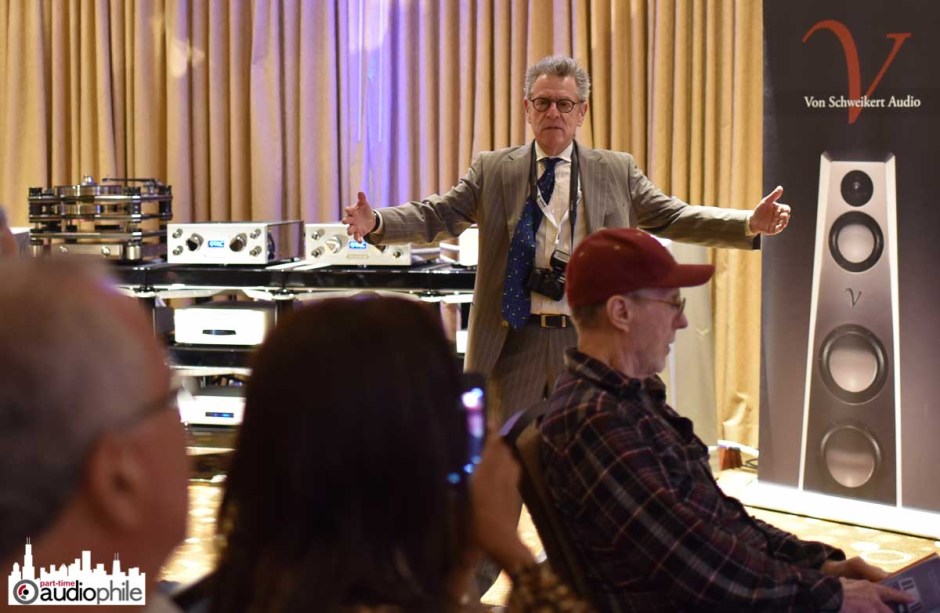 Yikes…I was six minutes late to the room. Keith from The Audio Company had mentioned a seminar late in the day on Saturday and it sounded interesting but I was too busy covering other rooms and got tied up on the elevator.  So I snuck into a side seat up front near the right channel speaker which was a gorgeous ruby red Ultra 55 from Von Schweikert Audio.  On the other side of the audience was an animated Michael Fremer talking about special pressings he was about to play on the Kronos turntable.  As Flounder would say, this is going to be great!  Michael is always entertaining and I had already visited this room twice and knew it was very musical.

Micheal cued up Masterpieces by Duke Ellington which I know well since I have it at home on the 200-gram Analogue Productions 33 rpm pressing.  It sounded great.  But beyond the reference level sound, we had a disc jockey of the highest caliber, Mr. Analog himself!  Fremer has an entertaining ability to convey the history of a record, it’s provenance with respect to sound, and an infectious enthusiasm for the music.  Having this comedy-trained analog guru was really a public service, in the best way possible.  The room was very full. 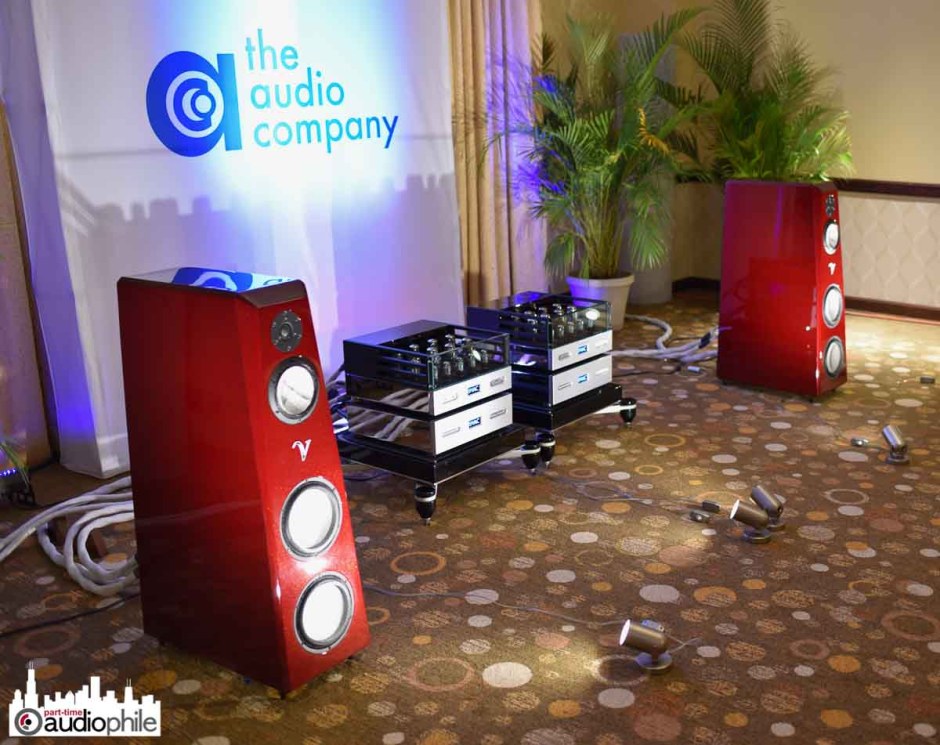 I explained that it was one of Columbia Records’ first tape recorded releases and one of its early LPs. It allowed Ellington to record the sophisticated suites he was performing in concert but that couldn’t be recorded so finally people who couldn’t go to a concert could hear it.  Unfortunately few then had long playing turntables so the release came and went.  It wasn’t rediscovered until Michael Cuscuna found it on a shelf at Sony tape vault.  He thought it was 78s collected to tape for LP compilation until he played it! Then [it was] released as CD but didn’t do much.  I found original at record fair and thought it was 78s until I played [it]!!! I convinced Chad to reissue it.  It was his best seller for some time and maybe still, outselling Tea For the Tillerman.   I said it’s one of the best recordings ever regardless of age! I stand by that.

That’s a heckuva fascinating story but in a room full of jaded audiophiles, how do you pull them even further in for the next story from Fremer?  Well, you simply wow them with a highly dynamic, natural, detailed sound that the Ultra 55s were completely ready for.  You throw a wide and deep soundstage.  You fill a massive ballroom that was a centerpiece of the show.  And you use a reference class turntable and cartridge to pull out every bit of musical information on Michael’s often special and sometimes one-of-a-kind pressings. 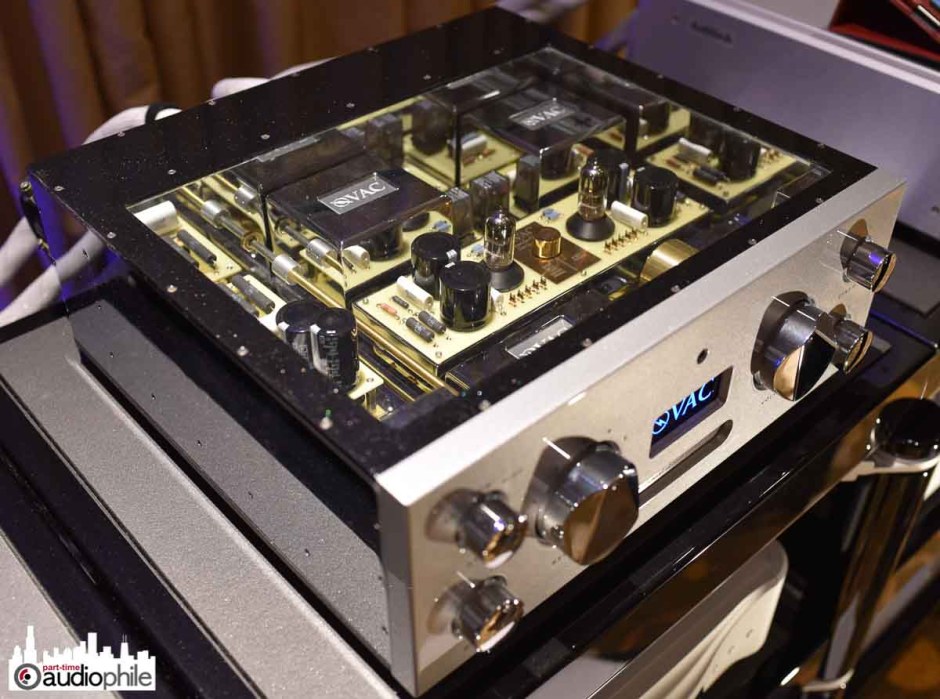 Fremer continued with a wide array of quality recordings.  Over several sessions, visitors heard a collection of great tracks.  Michael recalled these in particular:

I hope my photos turned out well enough for the reader to show how solid and polished the Valve Amplification Company gear looked through a clear top plate.  This is build quality of the highest order and, in my humble opinion, industrial art.  It reminded me of the stellar manufacturing quality I saw in person at the VAC factory.  At this price point, you expect something luxurious and you certainly receive it.  Fortunately, the more modest gear at the opposite end of the room also looked as solid, if not quite as shiny.  The whole system list reads like an audiophile went shopping after winning a lottery:

The pay-off from this system was genuine pleasure.  When Michael played Mood Indigo, the piano was nice and crisp and the sax as breathy in realism as I have heard.  The sax had gobs of presence and was (cliche alert!) “in the room.”  Bass was taut with nice note decays.  Hard to believe this was such an old recording and, for much of its life, kind of forgotten.  We owe Michael Cuscuna big-time for unearthing this gem and also Chad Kassem for another stellar QRP release. 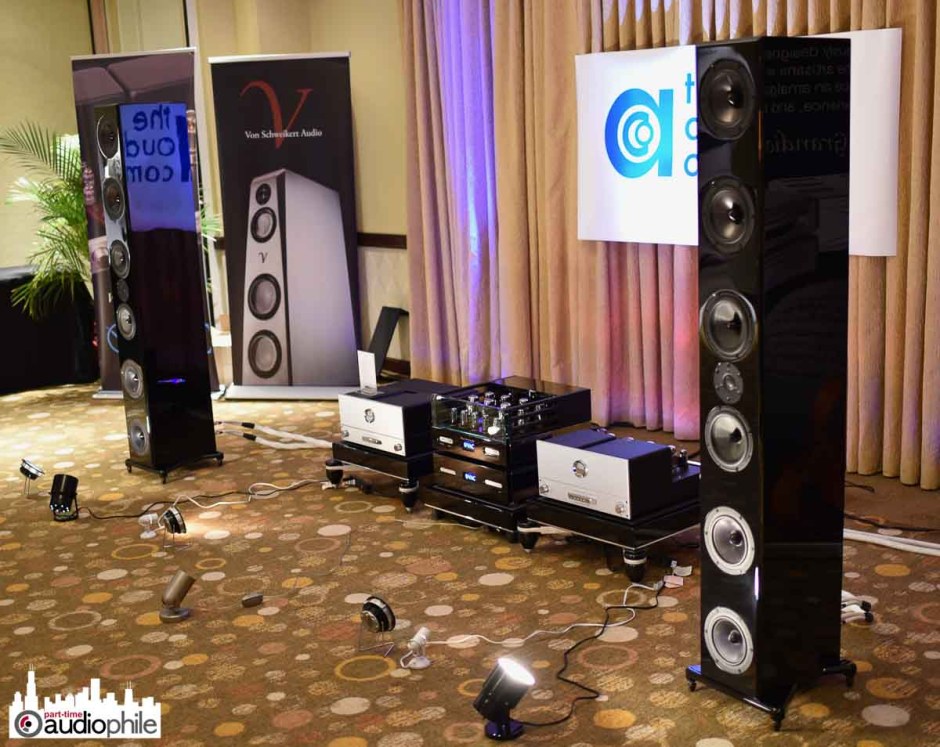 At the opposite end of the ballroom, the Audio Company team had the Endeavor E-5 speakers ($40k) and E-3 speakers ($10k) set up with VAC electronics.  The gear included the Renaissance V preamp with phono ($12,990), Signature 200 iQ power amp in mono at $14,500 each, an Esoteric K1 CD/SACD player at $27,000, a Clearaudio Innovation Wood turntable ($16,500) with an Airtight PC-1 Supreme cartridge.  The foundation for the gear was solid with Critical Mass Maxxum 4-high rack for $31,250 and an amp stand at $6,250.  This also sounded amazing on both digital and analog.  The system picked up the tone of a classical guitar work perfectly.

This was just a knockout showing by The Audio Company.  The Ultra 55s are not small but sure sound bigger than they are.  Well done Damon and Leif!  The VAC is gorgeous sounding luxury-fi, well done Kevin!  And Michael Fremer, I hope you do these story-driven seminars early and often.  And many thanks to Keith, Jim and Gordon of The Audio Company for putting all this complex gear together in the best possible way.

This room was a true standout at the Florida show.  I cannot wait to see what the team does for Axpona!

In my earliest listening days, I used to think that power amps sounded more similar than different. Sure, there were tubes and some exotic topologies that had a markedly different vibe, but mostly it was […]

Before I discuss the McIntosh MCD600 SACD/CD player, I have to tell a story. Just a couple of weeks ago I overhead a conversation between two audiophiles who were discussing the continued role of compact […]