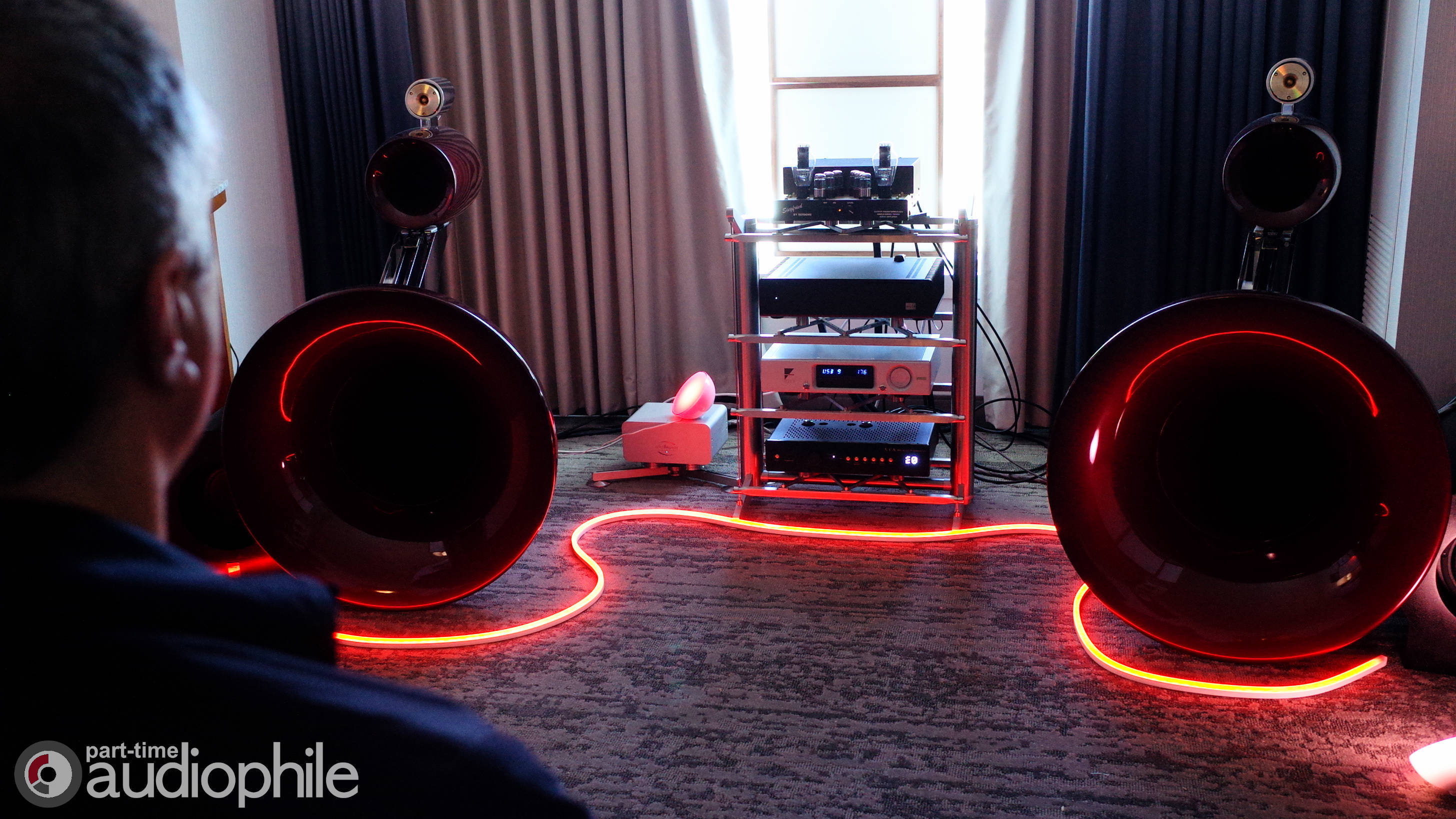 CHICAGO (PTA) — The Wolf Audio Systems room gets my vote for exhibiting the sexiest horn system at the show. Including and beyond the looks of the Sadurni Acoustics loudspeakers, everything in the system was dialed in and on time. The ultra-rare David Berning Siegfried amplifier opened up the entire system to new heights of texture and tone. Ayre Acoustics, Linear Tube Audio, Audience Cables, and Stillpoints did their fair share to round out one of the best exhibits at the show. 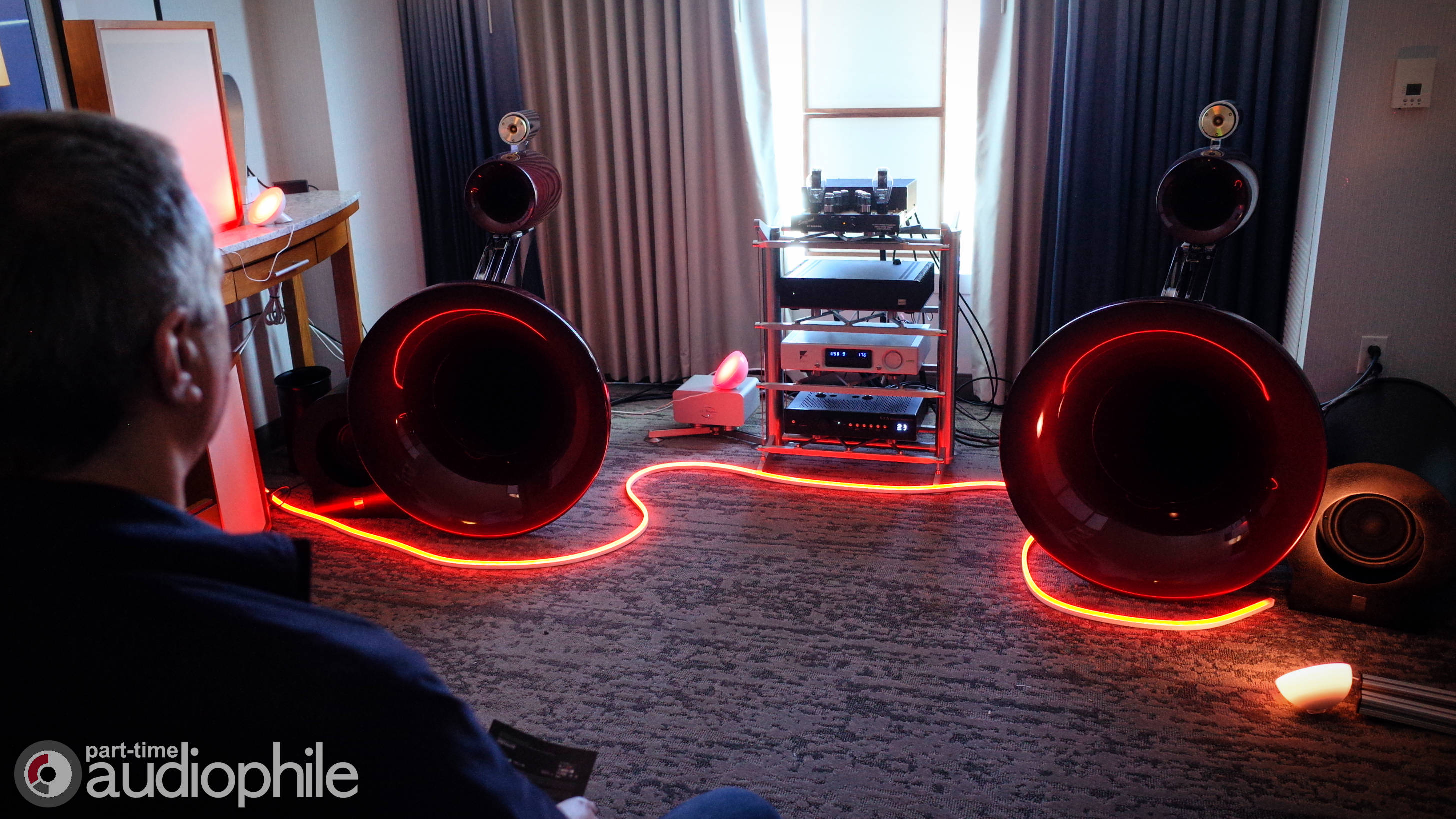 Wolf Audio helmed the exhibit system with its latest XS version of their evolving Alpha 3 music server. Which was developed in collaboration with Stillpoints and Exemplar Audio. Having developed the XS to include what each company brings to the table in their bag of technology goodies. The new Alpha 3 XS still uses the Flux Capacitor USB clock, and is now a Linux based model, which also includes the ability to interface with tablets, televisions, and monitors. With that you have a Linux browser, and a Linux desktop that has been customized to Wolf standards. Did I mention it also offers Blu-Ray playback? All-in-all, it is new direction for Wolf Audio and a definite maturation of the company and product line. There is much to be excited about with Wolf Audio in the near future.

Sadurni Acoustics Staccato GT loudspeakers were doing everything they could to steal the show. They are a time-aligned 4-way horn loudspeaker, with integrated servo controlled subwoofers, a frequency response that clears all the heavy lifting from 25hz on up to the sky. Sensitivity is rated at 106db, so if push came to shove, a clock radio could easily fill in for amplification. But why do that? Especially when you have a David Berning Siegfried 300B amplifier on hand kicking out somewhere between 8-and-12 wpc.

Digital-to-Analog conversion was handled by Ayre Acoustics QX-5 Twenty DAC, which in my more recent experience with Wolf Audio, is the way to go. Take note Joe. The digital nutrition was handled by LTA’s Microzotl Preamplifier. The Microzotl has a relay controlled stepped attenuator and features a ceramic PCB, along with new old stock tubes of the 12SN7 and 12AT7 variety.

On a high note, this was my first real listen to Audience’s new flagship series of cables, dubbed the frontRow series. What this cable lacks in direct lineage to any previous Audience models of cable, it gains in benefitting from years of research and wisdom gained along the way. The new frontRow series of cable are a complete departure for Audience as they look to claim a stake on higher planes of resolution, detail, and dynamics.

Soundwise the system is really ticking along nicely. Is it wrong to admit there have been improvements made here from last year with the addition of Ayre, the XS version of the Alpha 3 and the David Berning amplifier? I don’t think so. What is apparent is that all players involved in this encore performance, have made substantial refinements to their craft and ended up creating one of the more enjoyable and arguably best horn based system at the show.

All cabling by Audience Cables

A quick visit to the Sonist is always a high point for me. The Sonist himself is a fun loving guy, some who seems obviously into audio for the fun of it, and makes some […]

Occasionally, you get lucky. Like falling into step with vinyl evangelist Michael Fremer as he’s on his way to a do an exploration of some “interesting recordings” on a mega-system. Like many of you, I’ve […]

The 2018 Los Angeles Audio Show has been cancelled, and refunds will be issued immediately according to a statement released late Wednesday night by the show’s organizer Marine de Rogez-Presson. What this means exactly for […]