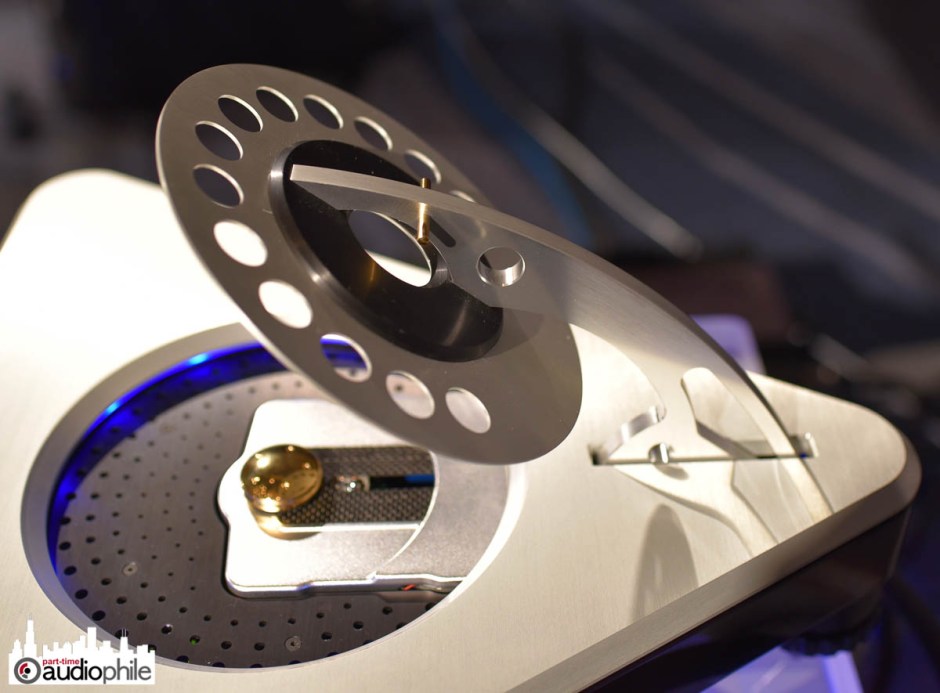 Two weeks ago, I posted a comment on facebook around the idea that now that the LP has (thankfully) re-emerged, the sound of CD is surprising some people. This got a lot of comments and some of them made for fun reading, many defending both the sound quality of CD and that of LP. I tend to enjoy both but lean a bit heavy in the direction of LP. However, something curious has emerged as a trend lately at audio shows…the CD-based demo.

What? CD quality? Not even hirez? Heck, we even get hirez streaming quality now, whether on the excellent Qobuz service or every computer audiophile’s favorite format, the superb MQA which continues to gather momentum.

I know you’re thinking yeah but what about reel to reel and high performance turntables for sources? You want to show off your speakers and electronics in the best possible light, no? 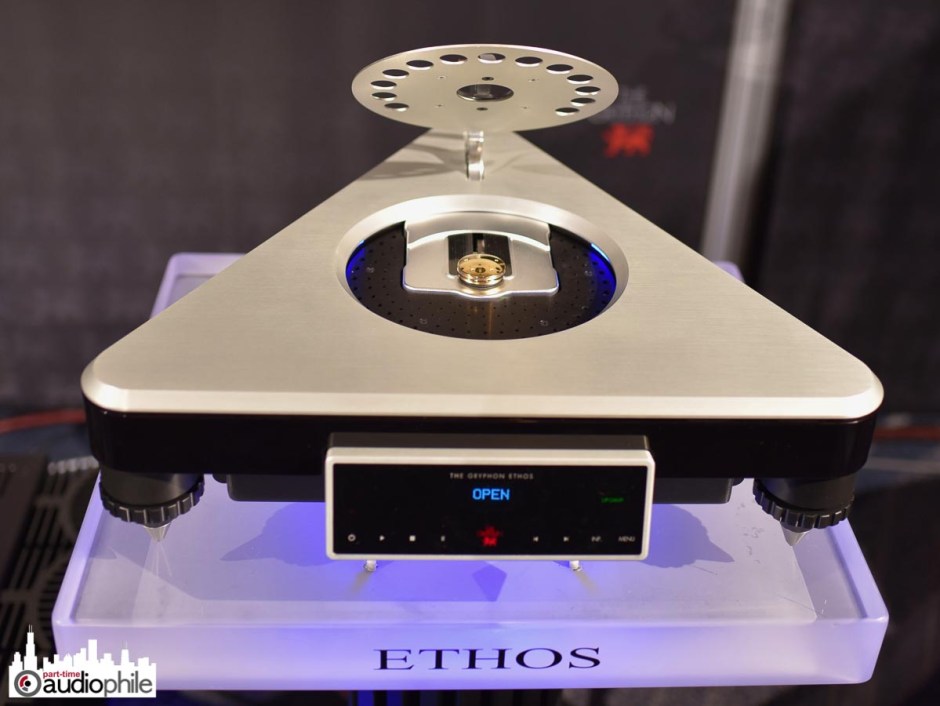 Gryphon Audio has an answer to all of this. If you make a CD player well enough, it IS a high quality source. And that brings us to one of Axpona’s biggest new product announcements, the Gryphon Ethos.

I’ll admit I’m a sucker for a pretty face. The Ethos is hands-down one of the prettiest CD players I have seen with a circular top-loading CD inset on top of a gorgeous triangular base. Magnificent!

Technical elements include ESS Sabre 9038 Pro chipsets, a fully discrete and fully balanced, Class A output stage. Seven selectable PCM filters, three selectable DSD filters. And, of course, it serves as a DAC with AES/EBU, USB, and BNC inputs. It can also be used as a transport with an AES/EBU output. LED bars highlight upsampling and phase status. You can play a disc and have the player upsample to 384 khz sampling rate PCM or DSD128. The Ethos sits on Gryphon Atlas Spikes, designed to dissipate any mechanical energy. Dedicated power supplies connect to the digital, audio, and display functions. 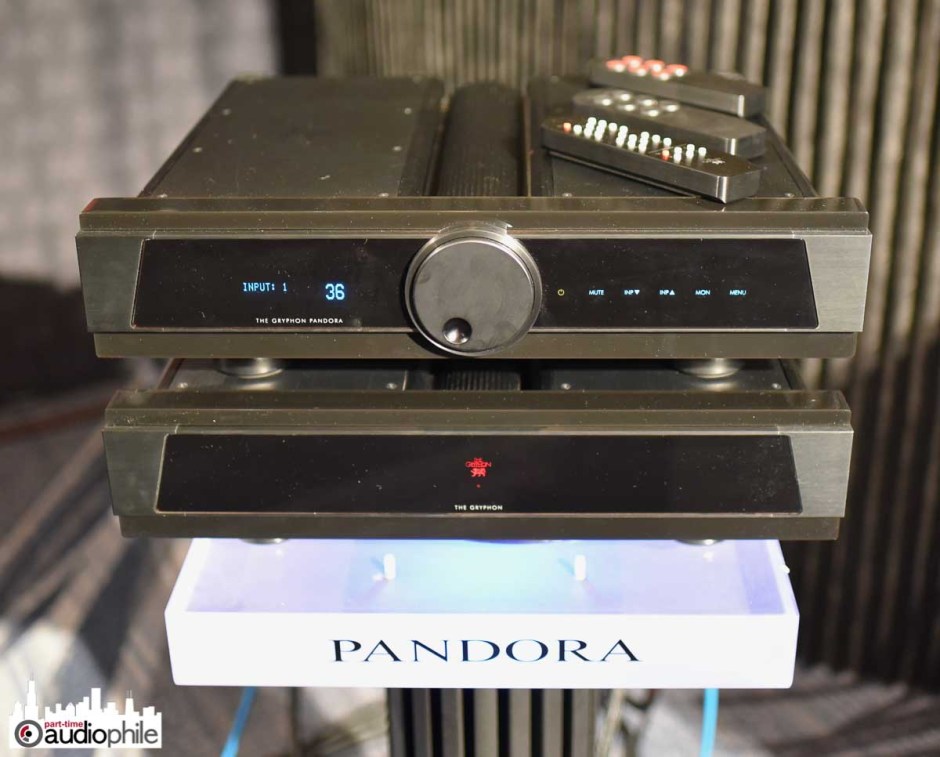 The full system on demo included the following:

There was a selection of passive audio components on display as well. I especially liked seeing the well-designed Mojo monitors… 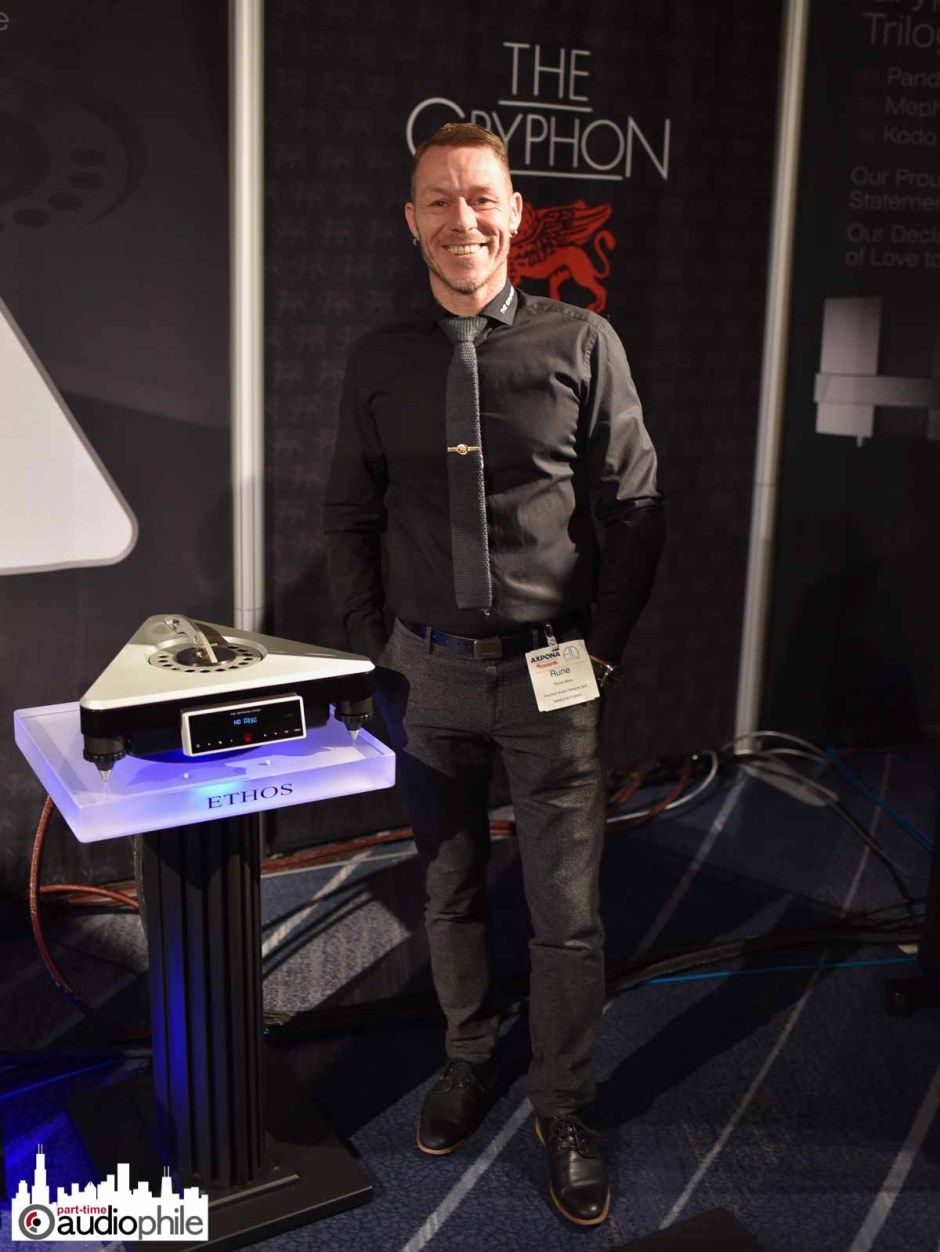 The Trident II is a full range tower with a wonderful scooped baffle designed for constant phase. Gryphon seems to be very focused on controlling room interactions by varying the Q values. A remote control for your speaker and room interaction? Nice. As Gryphon explains,

With room gain well defined and with the knowledge that a sealed loudspeaker’s response rolls off below its resonant frequency, it is possible to calculate complementary resonance and Q values for the loudspeaker and for the room to achieve resonance-free bass response from the speaker in a real room,

The Trident II Q Controller features pre-set and custom settings to seamlessly match the bass response of the speaker to the characteristics of virtually any room. Set-up of the Q Controller via remote control from the listening position is simplicity itself.

Full range requires a number of drivers. The Trident has per side 4 8″ bass drivers, two 5.5″ Kevlar midrange drivers, and and AMT for the tweeter. 95 db sensitivity and a frequency response of 16 hz to 27 khz. The speaker includes a bass amplifier with 500 watts of Class AB power. 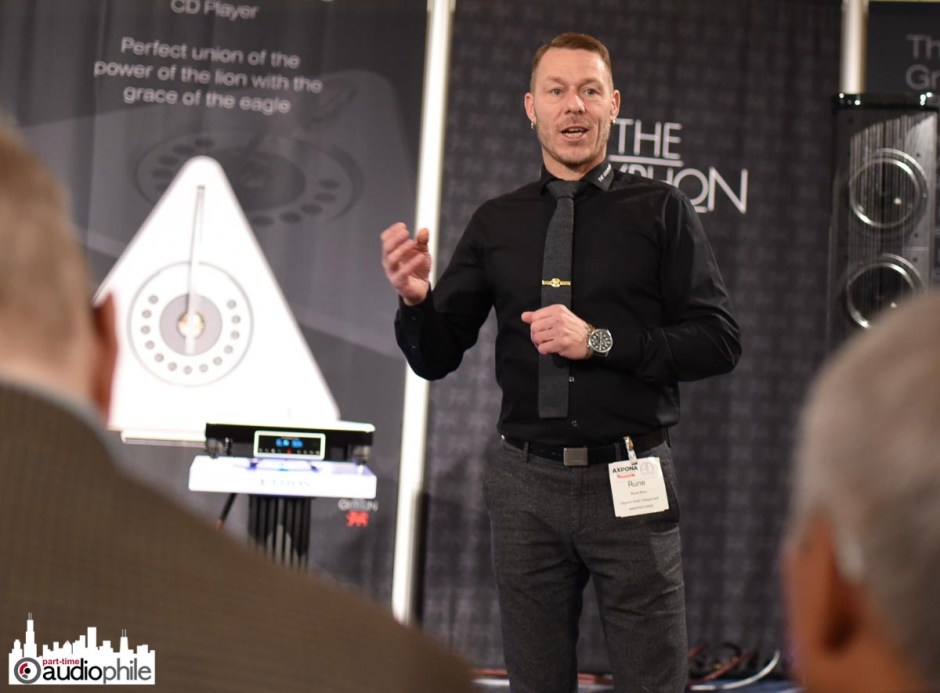 Incredible. Philip’s wife Pandora controlled a sign-up sheet for demos and slots filled up fast. The demo I sat in was full as were nearly all I heard. This was a popular room. Rune Skov did the demo and he is one of the best at this. Tracks were selected by Rune and we heard five tracks. Each was from a CD that loaded into the Ethos top-loader. CD! I still can’t believe it. Then I heard the sound and I really didn’t believe it. The CD tracks played were full of life. Not veiled, not lacking resolution. Rich in midrange. Deep bass. Depth of soundstage. Have we audiophile’s missed the fact that modern reference CD playback can be so damn good? Yes, I think we have. {ducks as Michael Fremer throws a shoe}

Rune and Philip put together a terrific of tracks. This is what we heard, 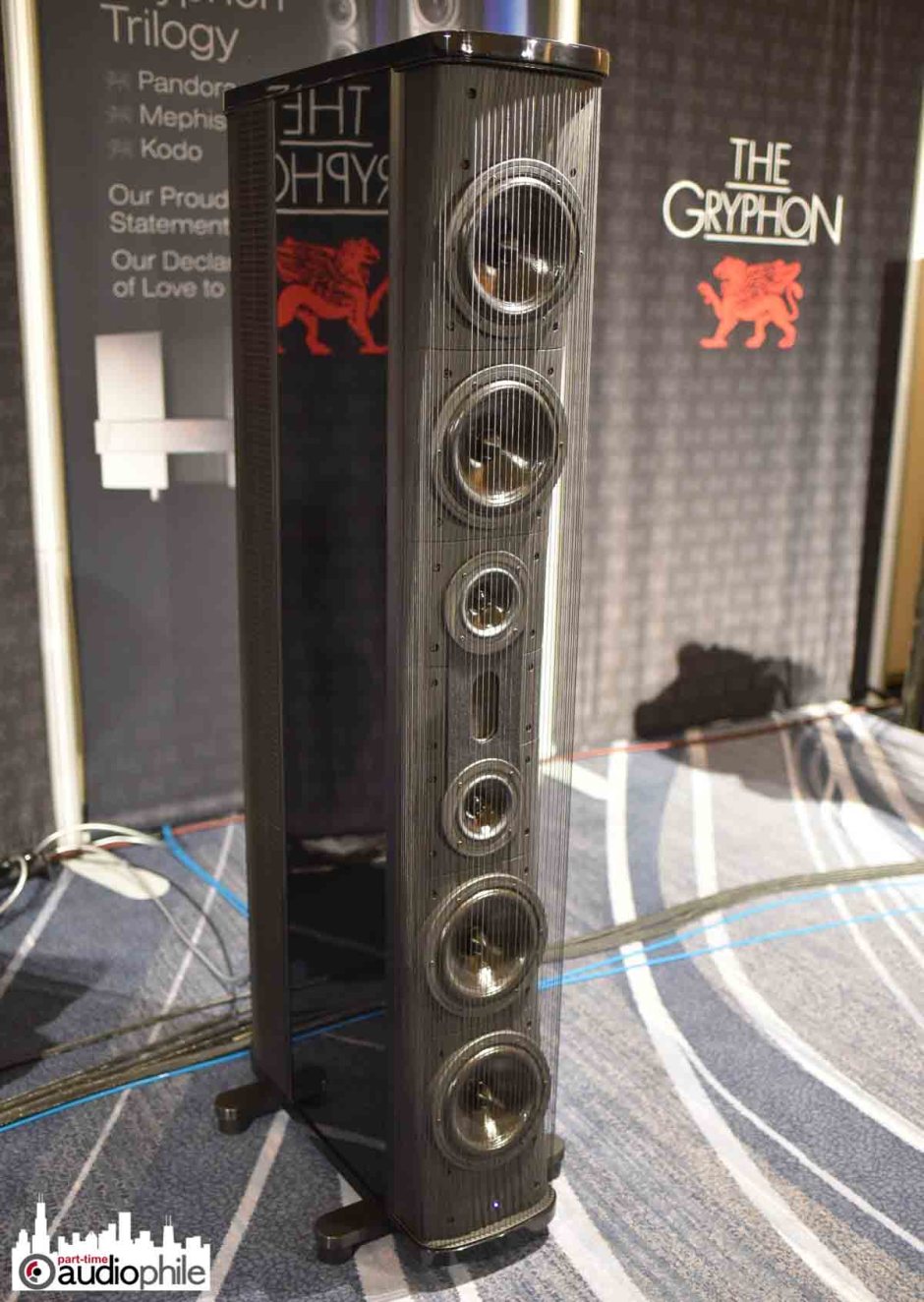 This system was another of a very few out of hundred that showed what really high quality two channel audio is all about. I still cannot believe how great these CDs fed into the new player sounded..

Or as John Goodman’s character Walter might have said in an imagined audiophile Big Lebowski, “Say what you want about digital playback, Dude, but at least they had an Ethos.”

Amen, Walter. And at least we have men like importer Philip O’Hanlon and Rune Skov reminding us how great the sound can be with a full Gryphon system playing the humble, and still far from dead Compact Disc. Keep spinning guys. You had one of the very best rooms at AXPONA and arguably the best demo. Well done!

There always are a number of mini-trends going on at any one time in the high-end. Lately, some of those have includes tape decks, vibration-control devices and integrated amps. Among speaker manufacturers, the open-baffle concept […]

By Dr. Panagiotis Karavitis Pure European Hi End sound is the way to describe this system. Gryphon Audio Designs of Denmark is known for their exquisite electronics, both in design and sound but in this […]

Magic shows. Who doesn’t like magic shows? As a child I was always impressed with anybody who could pull-off something even remotely magical: Pulling a quarter out of my ear? Check. Naming the card I […]