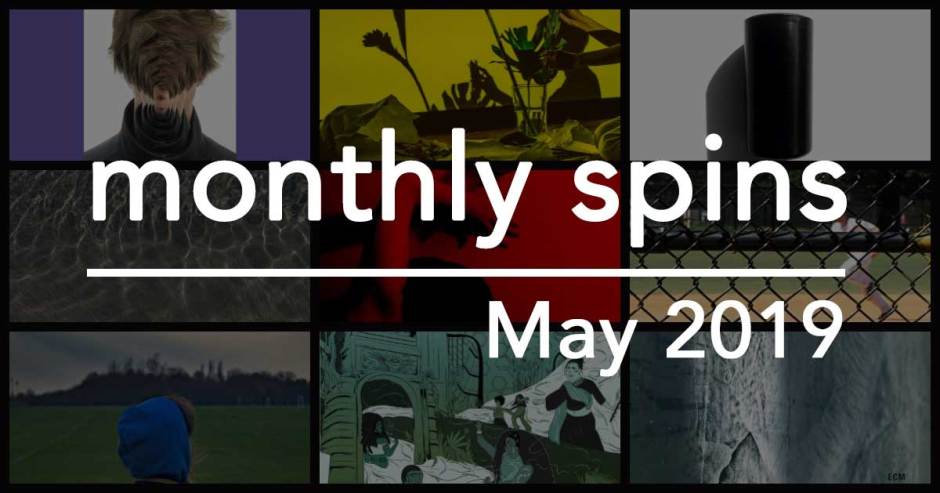 An extraordinary month for new releases. I’d be more honest if I said all of these are my favorites of the month, because I’ve played each of them many times, often with Netflix on in the background with the sound turned down and the subtitles on. I’ve noticed that Netflix is particularly bad with tone-deaf music choices for their original series and films. Perhaps they also have a stake in a recording platform? So, I alter the soundtrack while watching and many of these have albums have been part of that conversation and experience. Meanwhile, the Empire chugs along and there remains for some a thin membrane between the real and the unreal. No danger was detected. Enjoy the music.

You think it’s all going to be a raucous improvisational spectacle and remain at light speed, but then things slow down enough to allow the feeling of an acoustic quartet moving with stealth and heightened awareness. These are 20 minute compositions, so it is possible to cover a lot of terrain in that amount of time. The guitar player seems to be in charge and obviously took seriously his time listening to John Mclaughlin. Then again the saxophonist has a big say and the drummer seems almost Chinese. An upbeat and relentless place to spend two hours.

A wonderful reissue from 1999 is Leisester, UK’s Prolapse’s last album before they decided to go their separate ways. A little bit of a murky recording, but then this is to be expected from a band that leans toward goth and gaze, with Cocteau Twins and Stereolab level use of verse and voice. They were a thing from 1992 to 2000 and I missed them. During that time the internet was just became a thing and I didn’t live near any good record stores or knew any of the wizards who often work at them, who would play me things when I was in the store.

File Under: voodoo electronics, a world of rhythms

The group is made up of experimental electronic artist Val Jeanty and percussionist Ravish Momin who began as a collaborative project situated in Brooklyn while Momin was an artist-in-residence at Pioneer Works. It is an intense and hypnotic ride that dissolves somewhat into the last three cuts, which are remixes.

They claim live improvisational takes but and there are only two of them. And I haven’t found any live videos yet so it’s hard to tell. Melbourne, but there’s few signs of that tradition having any bearing on this recording. Here’s what they have to say and I don’t really doubt them given the array of electronics, as well as drum kit and guitars they are using: “We began Squaring Circles as an experimental project around the process of recording as a means of writing. This method created a spontaneity which brought a real energy in our approach to exploring sound and opened up that weird self-moving presence of how music directs itself when it’s not premeditated. The majority of these songs were essentially captured first-take jams. These sessions took place from mid 2015 until we finished mixing the record in 2017. The pieces of music we captured all slowly flowed together into a distinct narrative.”

With a file under like this it is possible to imagine some soundtrack to a minimalist, avant-garde NY scene. John Also Bennet (aka JAB) has so many credits on so many albums that it would be foolish to try and list them all. He plays on a C flute, a Farfisa organ, Roland Super JV-1080, a Chinese flute called a dizi, with Aphex Twin DX7 presets and the just intonation tuning system. This was got me right away and it’s held up to several listens. Bennet says of his first album that he wanted to…”create nice, strange, and thoughtful music that reflects a genuine inner vision of self.” He had me at “strange and thoughtful.” In keeping with my mantra about most ambient music this is Not Boring.

Rozi Plain: What a Boost

Plain began on the guitar when she was 13 and was an art student, then became a member of This Is The Kit band headed by the Kate Stables. This is her third solo effort. What an unexpected discovery and something I’ve listened to many times in past few weeks. Jazzy, loose african blues without a hint of angst and foreboding. Rozi Plain carves out a unique sonic space that is both soothing and poetic.

File Under: all related in improv

A group of Brooklyn musicians who have gotten together over the last decade six times to play improvisational music. These are live takes from sessions done in the same room. They claim no overdubbing. There’s a little Dead-C thing happening but these guys do not come across as stark and dissonant. They are absent the normal tendencies to play as many notes as possible and to do so at great speed. No one is showing off, they are all listening carefully as they play, following a seam.  And that’s a blessing and makes this recording worth repeated listens.

File Under: Her lost tapes

It’s possible that in some other parallel universe Lana del Ray might be making throbbing industrial music with an equal amount of awkwardness that she makes it in this world. But I doubt it. This is closer to Skinny Puppy than anything. Not metal, guitars smashed into corners of the a loop, industrial pulsing beats and static. The lyrics (and I wish they weren’t), are basically buried in the mix. Reading prior reviews of her work makes me believe that she is a righteous avatar for feminist values, who does not take kindly to the male gaze and it’s stripping down of selfhood. “This year has kind of been life changing, moving away from my older self. Back to the idea of self-care, that’s been bog this year with learning. I’ve had a lot of time to evolve with my process. It’s weird, I mostly work within the  medium of electronic music. I don’t consider myself an electronic musician, because I feel like that comes with a lot of baggage.” (no echo)

File Under: guitar/electronics master gets chill

When someone with these skills delivers some ambient it’s like waking up and remembering how the world really sounds. Still masterful and growing his sonic universe, Fennesz brings clarity and beauty back into focus. He has always been a bit of a trance inducer, trickster-like, and keeping a wide orbit from the fashionable.

File Under: Billions of galaxies and trillions of planets

Considering his “jazz” and film work there is nothing to tether this work from what he has done before. The reason for that seems to be in the collaboration and within the glorious reality distortion field of one of his best friends, Jon Hassell. The “Jazz” that Marsh has produced feels right at home in 80’s cinema but this album is more like a WTF jump into the unknown. Who would figure that this guy would come up with something like this, except maybe his friend, Hassell, who invited him to stay with him and create this album together.

File Under: classical and electro-experimental

This feels fresh and inventive and created by one who has a grasp of history, technique, and many of the traditional trappings of a hyper-charged Classical background. But what she has created using a variety of electric/digital affects and applications is to stretch, vibrate traditional instruments and make them into electronic workhorses. Splices from adverts, street conversation and other field recordings are woven into the mix. She has a strong sense of the history of ambient, and Modern Classical music to go along with viola performance degree from New England Conservatory a stint at studying early music at Hoochschule fur Musik in Cologne. Some Opera. She can sing as well. She is also a member of Holly Herdon’s experimental landscapes ensemble. I’ve listened to this a lot. It’s very good.

File Under: originality perchance to dream

I wonder how the phrase “sound collage” got turned into “plundertronics.” Perhaps a graduate student might be able to answer the question. One is at a distance and neutral and the other presumes a sort of ironic guilt that could only have come from a crumbling empire called The West. I reviewed his first album under this moniker, which was called “Self-less” and was no less original and awoke in me an almost liminal state. It is collage and it is unlike anything else I’ve ever heard. Jean Cousin is Joni Void a Montreal producer. The albums name translates as “placed into the abyss.” “Isolation is my personal solution”; says Cousin “not a single day without suicidal ideation.” Perhaps alien to some and inert in others, living with the pall of addiction and depression is suffering plain and simple, but within that shadow some, like the Joni Void moniker, manages to still finds the rare and the incantatory amongst the pain and anguish.

File Under: sound and movement

José González & The String Theory, “Let It Carry You”

File Under: Jose gets the full band treatment

Hamish Kilgour: Finkelstein File Under: barn owls, pudding and other tidbits Of course I’m kidding about this album being all about various puddings. Remember The Clean? Hard to forget the Kiwi sound and even better […]

New Stuff September dissolved so quickly it feels like only last week that I turned in the last column. I’m grateful that I have this digital gig in order to concentrate my tendency to maintain […]

by Joe Surdna Quite a list for June. There is just so much amazing new music being made and recorded that it really makes me grateful because I can concentrate on listening instead of watching […]